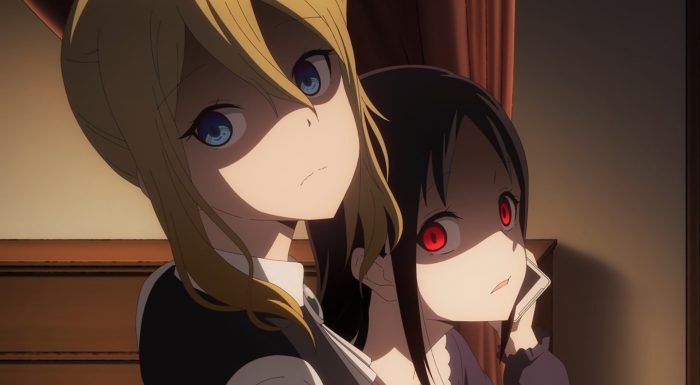 This was such a good return for Kaguya. It was a seamless return and made it feel like there wasn’t any kind of pause between seasons two and three. They managed to give plenty of attention to the whole main cast and I’m absolutely excited to see this season play out. The first two seasons were easily top 10 shows of their respective years for me and this doesn’t look to be changing anything in that respect. The characters were all as likeable as ever and having Iino as one of the group from the start this season just adds to the fun. I can’t wait to see where this season is going to go and how far things might develop. It made sense to start off with a few skits with the school festival being set up as a major event that the story will reach sooner or later. 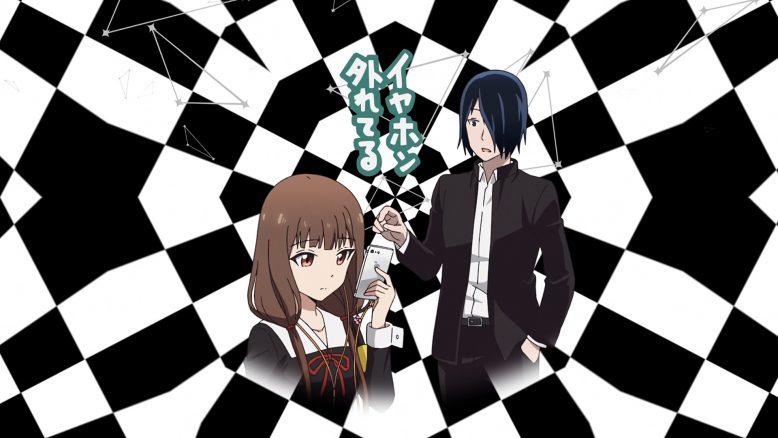 I do enjoy these two interacting

The Iino and Ishigami scene to start was just perfect. I probably had too much watching these two. Ishigami was a darn hero. He honestly tried his best to find a way to protect Iino’s pride without letting her know that he heard everything. But of course, all his self-sacrifice and effort ends up being completely pointless! Even still, credit to his idea of leaking some music himself to make Miko re-think her actions. It was a bit of a loss for him, but he could handle that much. Not like that kind of music would shock anyone in the student council. Problem is that he had way too much faith in Miko’s common sense. Such a perfect finish to that scene having her ‘comfort music’ being leaked to the entire student council. Nothing like a bit of public humiliation to bring a team together…or something XD.

I don’t think that scene was trying to express that honesty helps avoid bigger troubles down the road. But in some ways, it fits perfectly within this show. If Ishigami with the first calming tune had just said something then it would have been ok. Iino would have said something snippy, but they would have all been good. But he held back and waited until there was no way he could say something without her being intensely embarrassed. The camel thing was definitely out there, but nothing compared to the last track we heard. 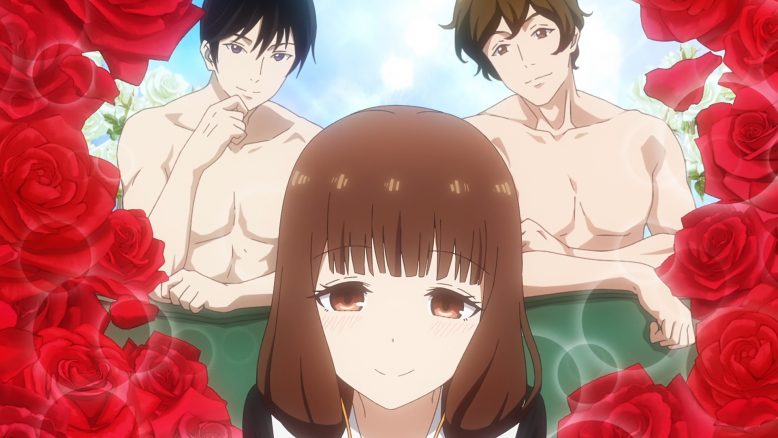 Everyone has their own tastes

In some ways it makes perfect sense that Iino feels the need for that kind of comfort music. Her middle school life was pretty rough with people really being against her. Even if things are better in high school I can imagine that she would appreciate comfort and reassurance. This is a girl who pushed hard for guys to have their head’s shaved because that was her fetish! Iino may be all about the rules and really care about people doing what is right. But that doesn’t mean she lacks her own desires. It is kind of funny how everyone does just choose to go home and pretend that never happened XD. 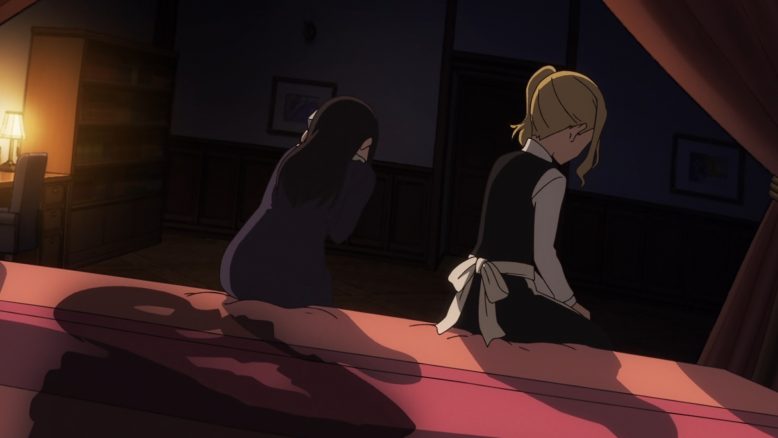 I love the use of the shadow here

The LINE chat part really gives me hope that they’ll find a way to push things forward a bit this season. This was legitimately one of the biggest crises that Kaguya has had to deal with when it comes to Shirogane. Without Hayasaka bailing her out…she was done for. There was no way on her own to create some excuse like that. Oh sure, she could say that was the case, but without a member of the staff right there to respond…it just wouldn’t have been very persuasive. On top of that, Kaguya wasn’t going to be rational enough to come up with a good excuse while being cornered like she was. She did push Hayasaka into helping out through a pretty intense stare, but in the end she still needed the help to get out of that mess.

Kaguya’s lack of information age knowledge does make things amusing. The one good thing for Hayasaka is that this time around it didn’t require her getting yanked out of a bath several times. I also enjoyed her inner debate about whether to even try to explain the situation to Kaguya. Helping her out would be nice. But at the same time…not helping her might actually push that relationship forward a bit. It isn’t like it matters to Hayasaka who confesses first. Both sides are being stubborn, but the important thing is that someone confesses. 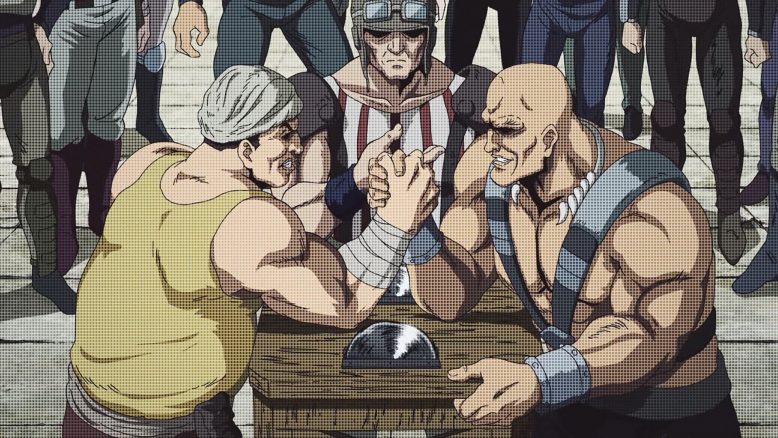 This would be one gruesome match

One thing I really love about this franchise is how much care is put into it. They didn’t have to start off from that ridiculous ending to season 2 and basically drop a new school down like that. Certainly, didn’t need to show a visual of the most hardcore version of arm wrestling I’ve ever seen! Whoever loses that game is losing their arm on sawblades! The only thing that came close was having Shirogane and Chika going super saiyan during their own match. Did they need to go there? Absolutely not. Am I glad they did? You bet! Even the ‘vs’ cards before each match were beautiful and full of over-the-top love by the staff. And of course, I loved seeing them go from making Shirogane vs Kaguya look like an intense match…to showing how they were basically just flirting! 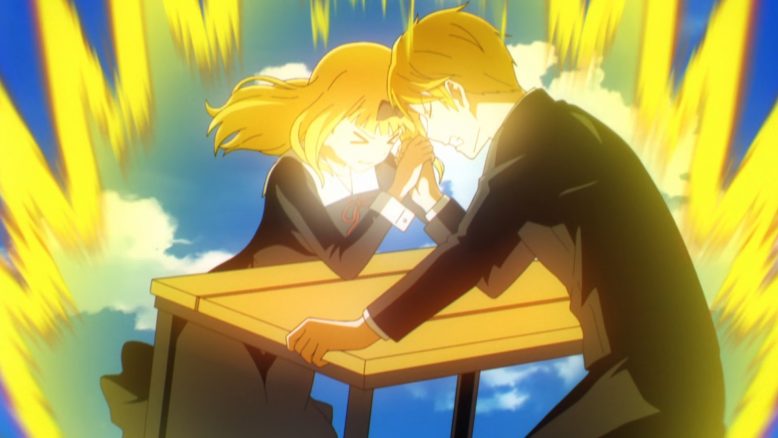 The arm wrestling overall was just excellent. And I do love how they cut back to it at the very end of the episode to establish that Ishigami did actually beat Chika. Though the highlight was how Kaguya won. She (probably) lied about being left-handed so she could free up her other hand for her calming ritual. Very much in character to look ahead to the final and know that she’d need her hand free to stay calm with quick bursts of touching her own face otherwise she’d be done for. That she won due to embarrassment over sweaty hands was perfection. Praise to Muscle Queen for her grand victory today! 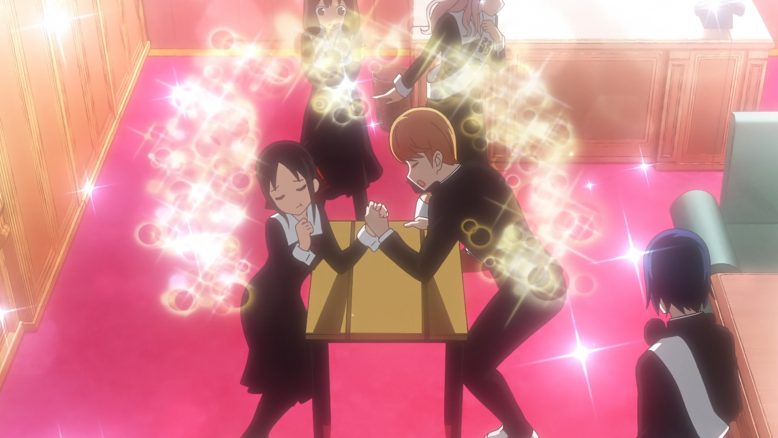 This season is going to be so much fun! Everything about the episode just reminded me of how much I like this series. It isn’t just about cute characters and romantic comedy antics. Though those things are both present without a doubt. The abundant strengths and weaknesses of the cast keeps things balanced. Kaguya and Shirogane especially are so capable and yet they pour their energies into something as utterly ridiculous as just trying to make the other person confess. And when it comes to each other they can’t help but slip up. It handles the tricky balance of letting us like these two and yet enjoy seeing them fail.

The odds are pretty good that I’ll stick with this one for the rest of the season. The first episode is everything I could have reasonably asked for. Fingers crossed they keep it up for the remainder of season 3.