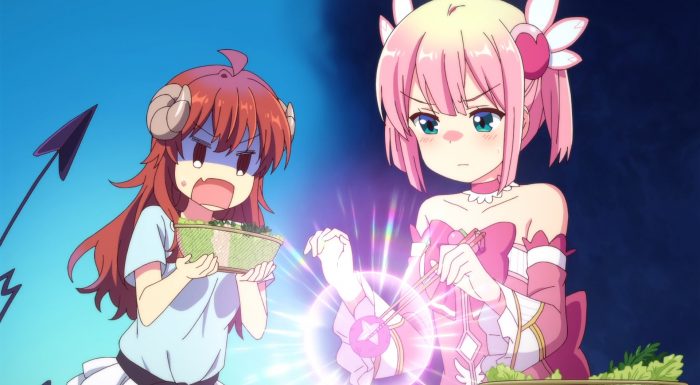 I needed this show back. Moving into a new anime season can be tough since great shows are left behind. But sometimes just one great show can make that a smooth transition. That was definitely the case here. This is such a feel-good show that I was instantly sucked right back into this world. It definitely helped that they picked directly up from where the previous season left off. So rewatching the first season was all the more effective for me here. They moved right into the misunderstanding that came from Shamiko’s letter of challenge to Momo. I’m so glad that they went all out with having fun with that. The bond between Yuuko and Momo is at the core of this series and the more of them together the better. 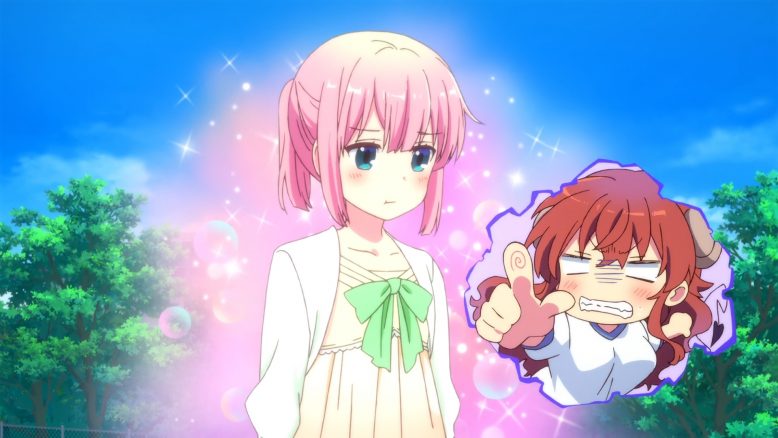 Thank you, Mikan! That misunderstanding was in a large part thanks to her. Of course, Shamiko just wanted to start dueling Momo as soon as possible. The sooner she can beat her the sooner that Momo will agree to become her vassal. But there isn’t much point in forcing duels. Until Shamiko gets a lot stronger, she’s just not going to be a match for Momo in a brawl. Even if Momo has been weakened from that bit of blood taken in season 1. The best part was Momo accurately disregarding the idea of it being a date…and then immediately heading back to her room to get changed XD. This ship is so darn powerful! You don’t even have to try to get maximum yuri out of it. The only thing keeping Momo from giving in is that Yuuko is just too weak right now. 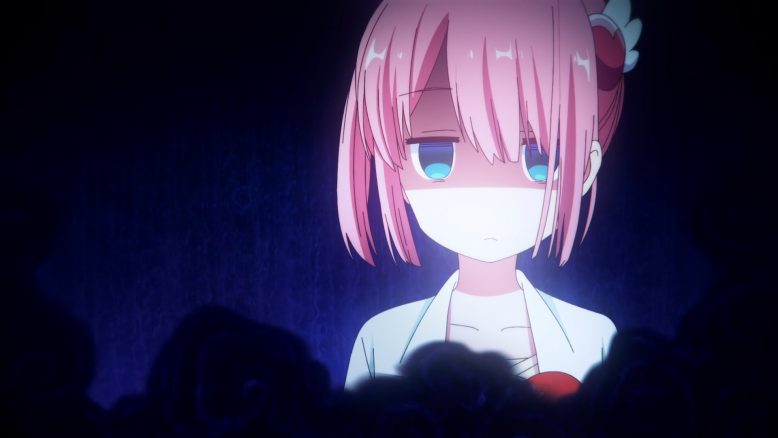 Come back from the dark side Momo!

I did love the date from start to finish. It really showed Momo’s idea of fun and it didn’t even involve weight training! Just a series of nice events from visiting a park full of cats to going to the arcade. I suppose it should be a given that Momo loves cats, but this episode really hit that home. Honestly it wasn’t a bad overall plan and I’m curious how the date might have gone if Yuuko hadn’t brought up the real purpose of calling Momo out. At least things did pick up nicely for the end of their date though. Even if Yuuko thought it was pure evil to give Momo black hairpieces…it does actually fit her changing style. There’s little subtlety in Momo changing to a dark uniform the day after Yuuko tried to ‘seduce her’ into falling to darkness.

It was truly tragic though watching how depressed Momo was in realizing that Shamiko hadn’t even called her out to have some fun. Even if it wasn’t a date, she still thought it was intended to be a fun outing. Thankfully Yuuko switched gears in a hurry when she realized what was going on. And it did lead to a nice reveal that Momo had just used her “Magical Peach Morphing Stick” to put together a cute date outfit. Very much the kind of thing you’d expect from a magical girl. Also reminds me that I hope we get to see Momo’s “Fresh Peace Heart Shower” this season! 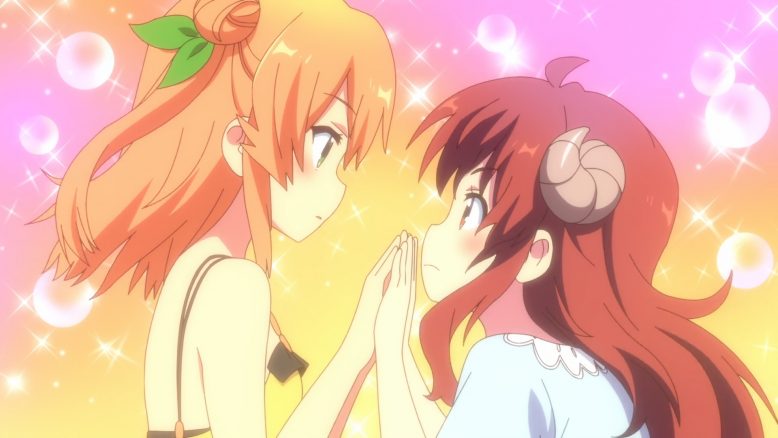 Mikan did get plenty of chances to shine and I like the idea of her and Momo being Shamiko’s neighbors for the near future. No shock that Momo absolutely got jealous seeing Shamiko and Mikan being so friendly. Not that it’s a bad thing for the people she cares about to get along…but things are complicated. All the more so if she’s feeling left out. Lilith was on point with hitting on the major reasons why Momo was in a bad mood. But probably not a good idea to antagonize someone that can throw her out the window at mach speeds.

It was nice though to get to know a bit more about Mikan. Her curse is serious. I can’t imagine what her childhood was like if it was actually way more severe than it is right now. Even at this point in time her curse can cause some real problems. I can completely believe that things were so bad that she couldn’t even interact with other people safely. Momo’s sister really did a lot of good for a lot of people. I hope she is alright. It would be a shame if this journey concluded with finding out that she faded away or something like that. 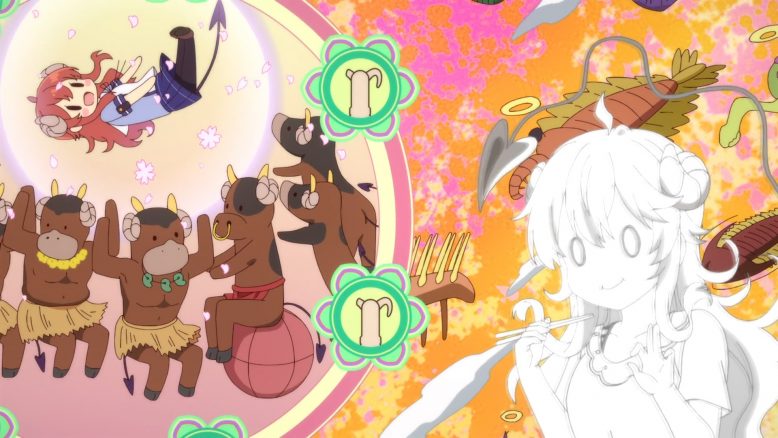 While I did enjoy Mikan and Shamiko improving their friendship…it was the moment with Momo and Shamiko just discussing Momo’s weaknesses that stood out to me more. It is absolutely true that Momo puts so much onto her own shoulders. She said herself that the only reason she helped save the world in the past was because she had trustworthy allies with her. So, trying to resolve everything in this situation on her own just isn’t a good idea. No shame to relying on those around her when it comes to things she’s bad at like cooking. On the positive side Momo can use her seemingly vast source of funds to bring good food for Shamiko’s family to eat. That seems to avoid curse issues. 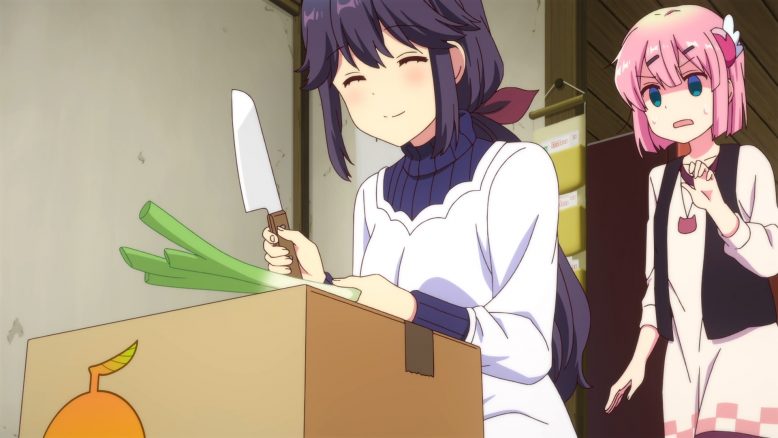 It was just nice to have this show back. There is just something really comfortable about it. In a season packed with some pretty intense series, this is definitely a nice one to relax with. Maybe it shouldn’t count as being completely relaxing since there are plenty of serious elements in it. But the show most of the time is pretty fun like this episode. It is just those serious moments that spices it up a bit when the time is right. I’m curious to just delve more into the mysteries that season 1 left for us. How much it will cover I’m not sure. But at least I expect this to be a really fun show. I’d love to cover this show for the season, but it will depend on how the other shows turn out. Tough to cover everything.