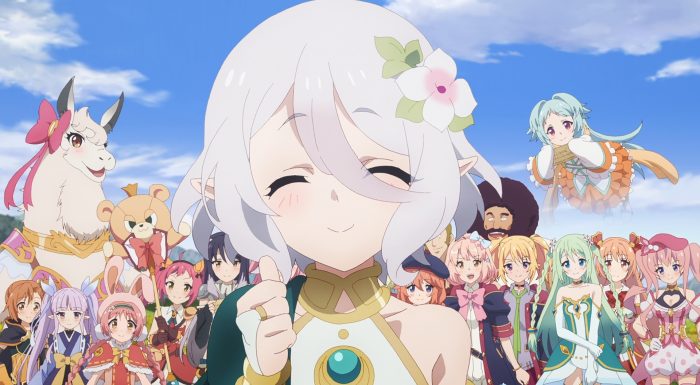 There is no doubt that Princess Connect has found a way to balance out the comical elements of the series alongside the emotional ones. This episode really could be summed up as simply doing that. You had the sillier elements of the letter rescue mission alongside Karyl, Pecorine, and Yuuki facing themselves to some degree. That goes especially true for Pecorine and Yuuki. These two have a lot going on in their heads and we can see that in this episode. But alongside that you have the purely sweet mission of Kokkoro to ask for help from the people they’ve met. That mission leading to a purely hilarious battle against bandits that decided to rob a post office! 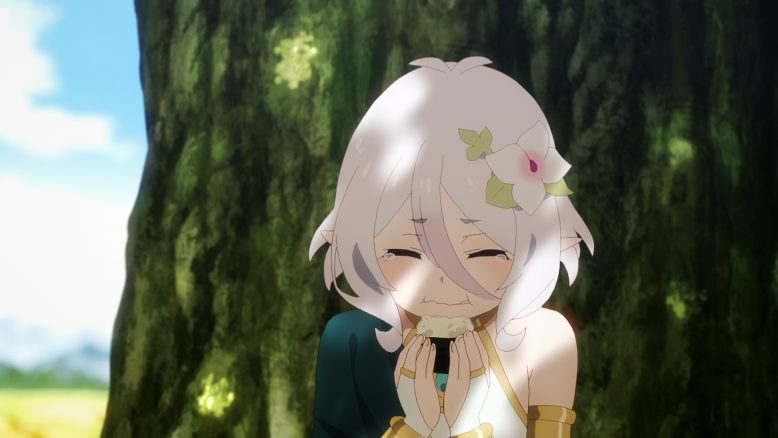 They just let the emotions show this week

This episode also managed to establish Kokkoro’s place in the story. She doesn’t seem to have the emotional baggage of her companions or a massive secret that is weighing her down. And because she doesn’t have those things, she can play a valuable supporting role. She’s particularly done a good job of that for Pecorine. Last season left her in a very important position for Pecorine. Outside of their enemy she’s the one person Pecorine believes knows the truth about herself.

So, Kokkoro is the only real person that Pecorine can confide in. Yet even with that being the case she’s terribly afraid to actually express herself. If she relies too much on Kokkoro what happens if she forgets? But there’s no question that Kokkoro is doing her best for those around her. She isn’t the most powerful person there. But Kokkoro cares a lot and is trying everything she can. It’d be nice if Karyl and Yuuki opened up a bit more to her. But without her I don’t think Pecorine could bear the weight of her situation. Which made the last part of the episode so much more emotional. Those two sharing an emotional cry while eating those onigiri. 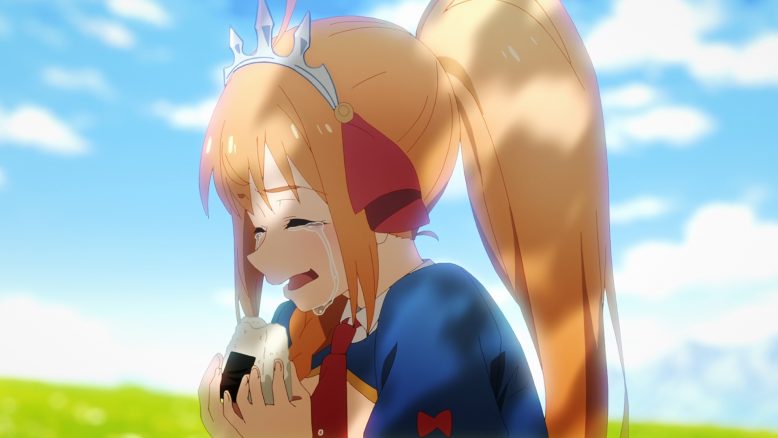 Pecorine crying from the joy of not being alone…

It is good to get into the heads of these characters though. Pecorine really has a lot that she’s handling. The recent confrontation naturally left her shaken up. Even if she can hold her head high and struggle onward, it’s hard to get up each day not knowing if everyone will forget her. The heavy fears that if she does reach out that she might lose everything again. It isn’t an issue of those two not believing her. I think she has enough of a grasp on reality to know they wouldn’t reject her. But the issue is if she keeps gaining people that know who she is when will the reset button get pressed? She’s up against someone that managed to make everyone she knows and loves forget her. There’s no guarantee that she can’t do that again.

Of course, whether or not she tells them that risk remains true. It isn’t like Pecorine is maintaining an emotional distance from everyone. But knowing that and acting on it are two different things. Makes sense she’s having dreams and to a degree hallucinating. The pressures on her psyche have to be getting out of hand. They have to deal with this situation before it’s just too much or before something is done to all their memories. 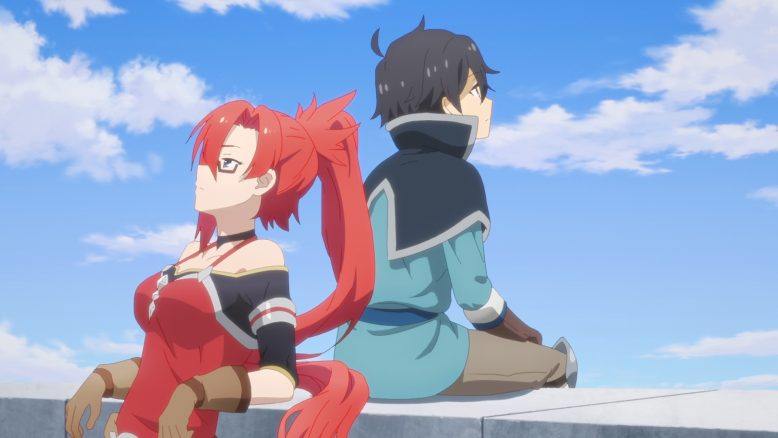 I’m glad as well that Yuuki got this moment. You can really see how he’s coming together now. His speech is still a bit awkward and off. But he’s definitely much more coherent and able to express his feelings. The realization that he had a different group of companions in the past and lost them. There’s still no sign of where they are right now or if they still exist. But the truth of the matter is that Yuuki has to deal with what he’s got right now. I’m glad Labyrintha showed up when she did. There is a risk that Yuuki could get too lost in what he doesn’t have that he neglects the companions that he can do something for right now. He’s not the most powerful person in the world, but his power is unique and valuable.

If he’s got time to feel the weight of regrets then he can make sure to be there when it’s most important. There is an irony that he was off in thought while Kokkoro was dealing with bandits. Thankfully nothing bad happened this time. But he’ll have to be on his guard. We’re heading into the last part of the series after all. Things are only going to get crazier from here on. 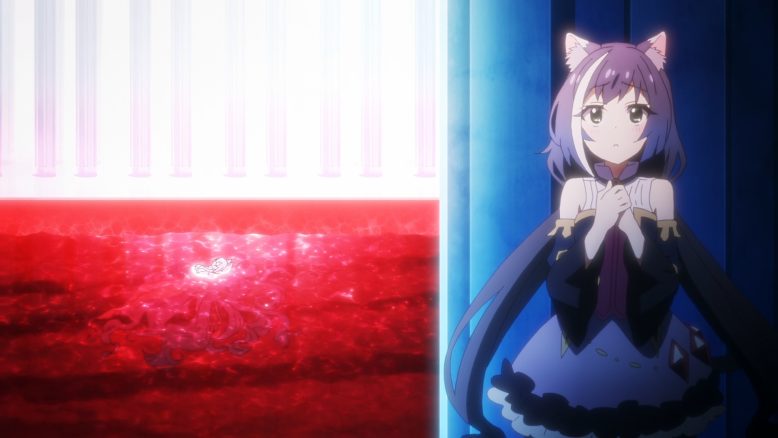 Karyl’s situation remains a tough one. She still hasn’t found her own answers. All she is doing is getting deeper and deeper into it. She will have to make her choice and that time is fast approaching. But for now, she’s just being pulled in two directions. There was that interesting moment of her being lured down into that chamber and there being two main villains. Or one real one and a fake. But the point is that someone wanted Karyl down there and it doesn’t seem like the other one did. I’m going to hope she wasn’t bathing in a gigantic pool of blood. But I can’t fully discount the possibility of that. Bringing up the name Metamorregnant after capturing her a few episodes ago. I’d hope saving that person will eventually become a priority. Though I can’t blame the main cast for not fully realizing her situation. 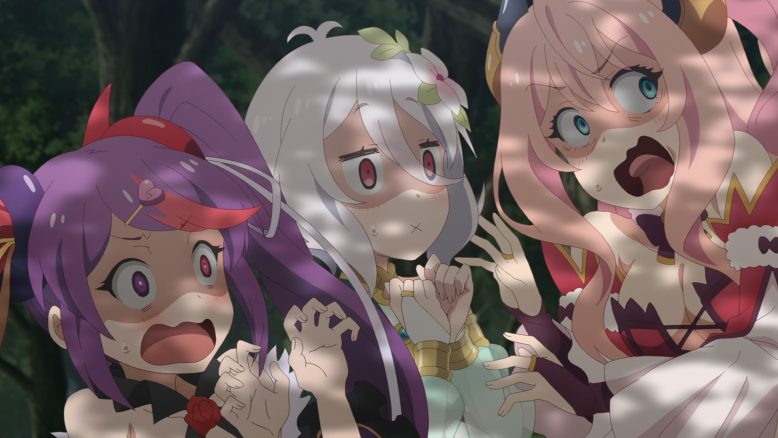 This season has memorable expressions

There was fun with the introduction of Io, Suzuna, and Misaki. The latter two got a lot of focus as absolutely horrible students. I salute the academic efforts of Io for trying to save their grades. But I think that school is totally getting shut down…The only hope there is that Pecorine can regain her position and not have the government shut it down based on two absolutely idiotic students. Although Misaki has all my condolences. I haven’t seen pheromones fail that hard since Persona 4 Golden’s ‘scooter scene’. Poor girl needs to accept her limitations.

At least those two were good for some laughs. I worry for Misaki and her absolute delusion regarding her adult appeal…At least it gave us a fun excuse for Kokkoro to bust out the good old Ameth summoning distraction. A classic maneuver that still works incredibly well. Maybe not calling down the power of Ameth to save the day, but it works just fine in terms of scaring the heck out of people. 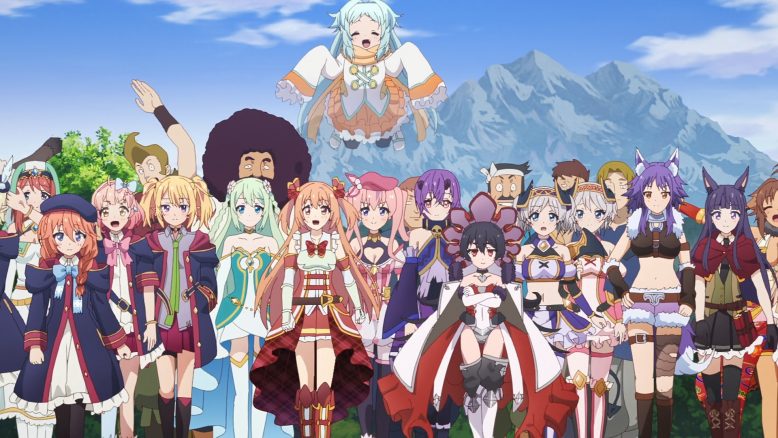 Wow this show has a cast

We are building up nicely to the finale of this season. The characters have had chances to face themselves with Pecorine determined to tell the truth. Of course, the only one that is unaware of the truth right now is Yuuki, but it is still worth telling. While it is going to be emotional, I’m still glad that Karyl and Pecorine’s secrets will be revealed. I’m not completely sure if everyone will get to understand how crazy Yuuki’s situation is though. But I still expect for those lost companions to tie into the finale episodes. Kokkoro may be the only one of them without any obvious source of drama. But I still see that as a positive. Since there just isn’t any room for more drama. 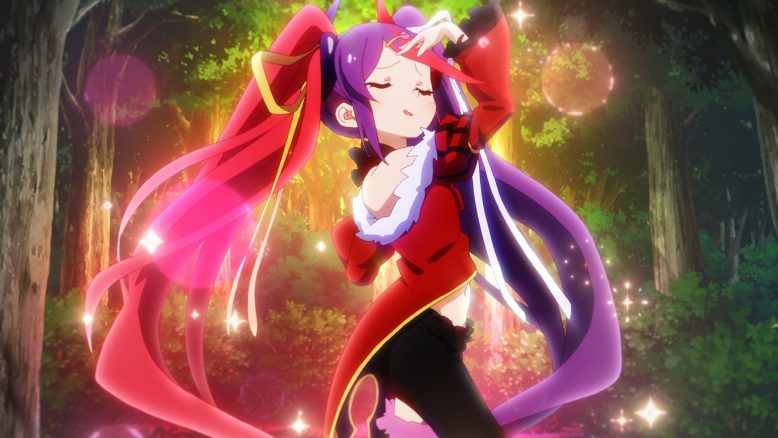 Credit to her confidence…

At least we had a really positive note to end the episode on with almost the entire cast showing up to help harvest some rice XD. Even though most of them didn’t get lines that was really a nice move. Just shows how many characters they’ve managed to introduce across these two seasons. There is a lot of love that has gone into this franchise as a whole. And I’m completely convinced that the last quarter of this show will be worth watching.