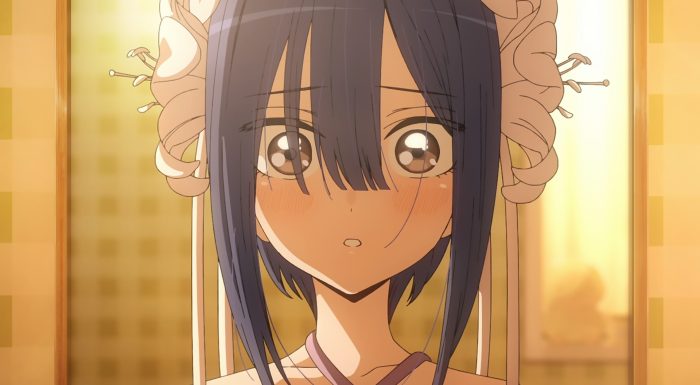 This cast being very likable isn’t a new thing in the slightest. But I still find myself appreciating how enjoyable they are to watch each week. While Marin is definitely the star of the show, she isn’t the only good character here. Gojo continues to gain friends along with growing as a character. But honestly the Inui sisters both got a chance to shine in this episode as well. Although between the two of them I would say that Juju was closest to being considered the star of this episode. I was already looking forward to seeing her getting to wear that cosplay and this episode just solidified that feeling. 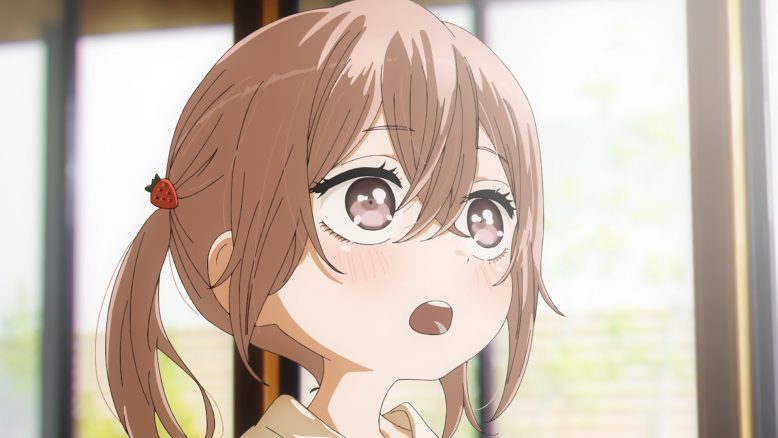 Some things just resonate with the heart

In some ways, I could really empathize with Juju. She’s a bit steadier compared to the bubbling energy of Marin. Now Marin’s energy is part of why she is so fun, but it is a bit easier to relate to Juju. I’m sure a lot of people have had dreams as a kid that were just not possible. Juju wanted so badly to become a magical girl because she loved everything about them. So, it had to be a rough thing to realize that dream was simply out of reach. Of course, there are several ways people can get closer to dreams like that in terms of getting into animation, voice acting, writing, etc. The closest thing Juju found for herself was the realization that she could cosplay. Wearing the outfits wouldn’t give her magical powers or anything. But that magical moment in her first cosplay really hit home.

Sajuna considering cosplay as something for herself also resonated with me. Obviously, there are differences between private cosplay and writing online since one is inherently much more public. But I could still draw a parallel between her cosplay and the reason I write at all. From the start when I was just writing massive comments on other anime blogs there was just a desire to process my feelings about shows. Even posts like this start out as something I’m doing for myself and because it’s fun. So, I can relate to Juju cosplaying because she loves it. All she wanted originally was for her sister to take some pictures so she could enjoy them later. That she ended up with this big account and tons of followers was just an extra. She wouldn’t be doing it if she didn’t enjoy it and she cosplays what she enjoys. 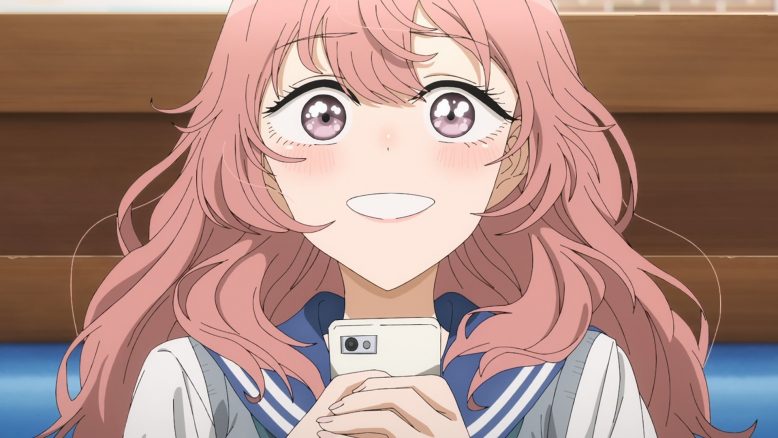 In a sense the Juju name makes sense. I presume she’s just taking it from their names Sajuna and Shinju. It is their account even her sister doesn’t appear to have much interest in it and Shinju herself is too shy to actually interact with the followers. There is definitely a lot more to explore with Shinju herself since she was just introduced. I’m curious how much of a desire there is on her part to cosplay. Obviously, it hasn’t been talked about between the sisters from Sajuna’s response. But there’s no reason that she’d shoot down her sister if she wanted to do it.

It feels like they are building up to her admitting she wants to do it and that she’s holding back for some reason. There are a lot of standard reasons she could have for it. Maybe she’s not confident, worried about her height, or just idolizes her sister so much she can only see herself as inferior if she did cosplay. I’d be fine if she actually doesn’t want to cosplay since she does seem to really enjoy taking pictures. That passion doesn’t seem to be a lie. 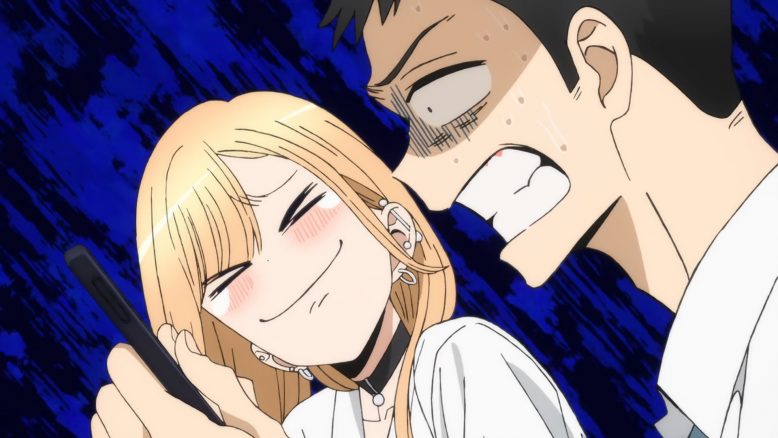 The costs are pretty intense

This week was all about the cameras. That is definitely an element of cosplay that can’t be ignored. The possibilities grow when it comes to getting a good camera and software. Cellphones have come a long way in terms of cameras. But it’s no shock that so much more can be done with a legitimate camera. But that kind of hobby isn’t cheap. The costs as we saw in this episode can reach incredible limits. Even considering the differences in currency those things aren’t cheap. In terms of Canadian dollars, the costs ranged from a little over $2000 to over $11,000.

I’m sure the higher end ones are pretty amazing. But that’s a cost I couldn’t even wrap my head around. Certainly, if Marin saves her money appropriately, then she can probably afford one of the relatively cheaper ones. But she also still has to afford to pay for the materials for new cosplay so there’s only so far the money can stretch. 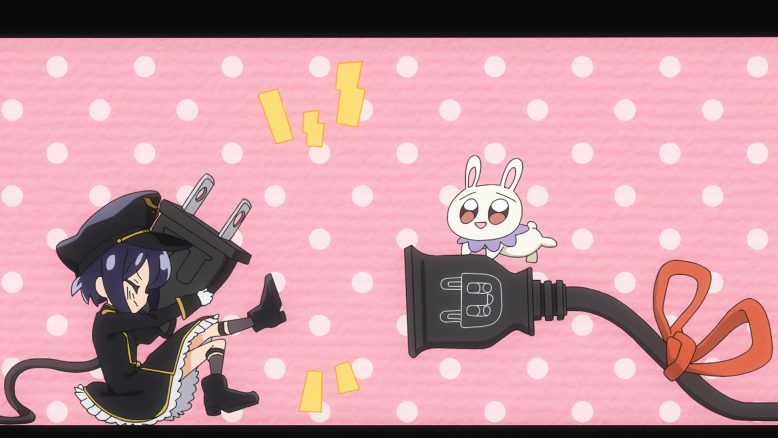 This was a cute way to express Juju’s shutdown

I’ll continue to watch the friendship between Juju and Gojo with curious interest. Here’s hoping they don’t actually have her fall for Gojo. Since there’s no real point in that with how utterly locked into each other Marin and Gojo aren’t right now. I’m good with her fainting when she did of course. She was in a stressful situation, Gojo was acting weird, and she’s hardly use to that much male physical contact. I did honestly appreciate their scenes though. Juju allowing Gojo to feel the joy his grandfather felt years ago when Gojo was blown away by his work. This is a good moment for Gojo. He got to feel that kind of joy and really that alone should make all his hellish work worthwhile. And honestly, I expect he’ll knock that next cosplay out of the park to express his gratitude to Juju for it. 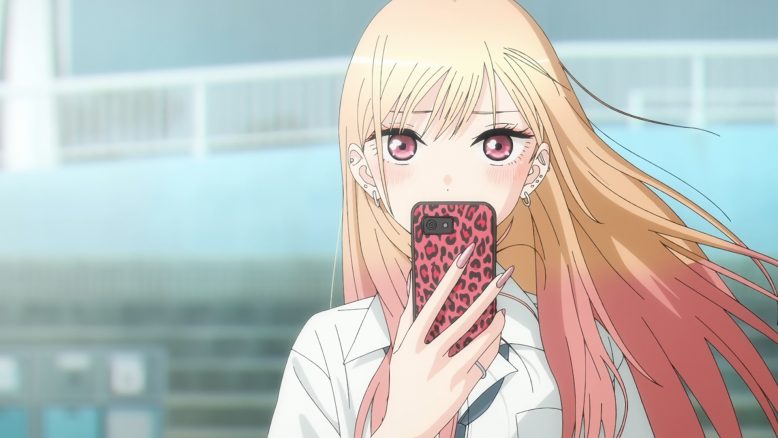 This girl has fallen hard

There wasn’t as much time spent on Marin and Gojo’s budding relationship this week, but we still got something. No shock that Marin remains as head over heels as ever. Glad she managed to even basically ask Gojo out for summer dates. Although I have no doubt, she’d invite him even if she hadn’t asked then and there. Of course, Gojo could also be blown away by Marin’s…energy. But the best thing was the admittance that he really hadn’t experienced much. While loving hina dolls and working hard on them is a good thing, it has left him with many things that he hasn’t tried yet. Not every experience will add to his work on hina dolls. But there’s no doubt that the more he experiences the better he’ll get at the thing he wants to do the most. 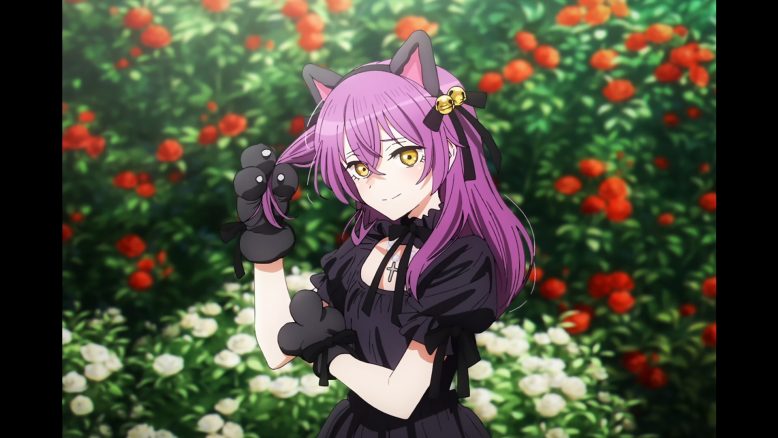 The cosplays really are good

Once again, this show just doesn’t let me down. The main cast continues to be fleshed out and I’m really excited to see the next cosplay. It will be both a fun one and very emotional for the characters. A legitimately perfect magical girl cosplay will mean the world to Juju. And I’m sure that getting to cosplay with Juju will mean a lot to Marin too. It is kind of nice that bit of jealousy from Juju allowed all this to happen. Of course, Marin and Gojo would keep doing their thing regardless of this. But there is something to be said to adding to the cast of characters. All these characters have their passions and that is easy to see. And that just makes it easy to talk about this show every week.