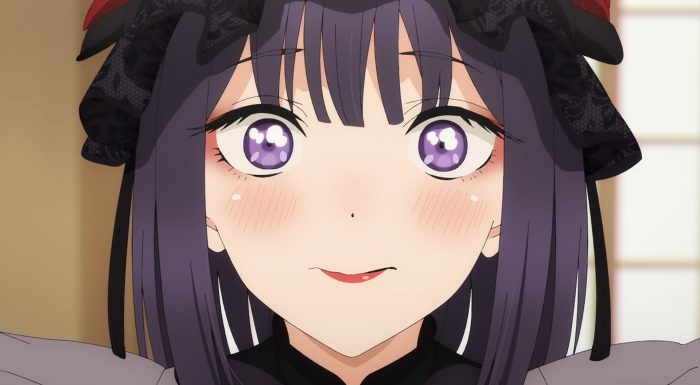 Yet another week where this show brings forward an excellent episode. This time it was really Gojo’s show and he did well with it. Of course, the biggest draw for many has been Marin and that’s justified. But this episode shows how they are both valuable characters. And it was an interesting episode in the way that Gojo’s character made mistakes but also, they were mistakes that will benefit him in the future. Doing everything right would have had less impact on both the audience and on Marin herself. Thankfully the show also doesn’t pretend that he didn’t make mistakes. Gojo gains a lot from both what he accomplished and what mistakes he made along the way. In some ways that is the best path for a character if they’ve got to make some mistakes. 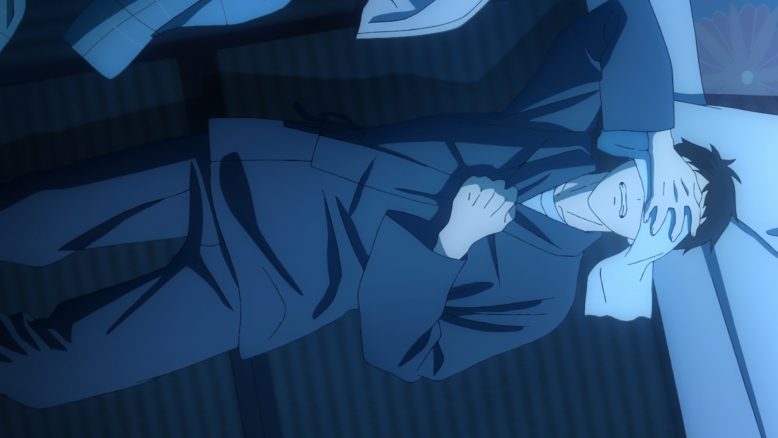 This episode was a journey

The obvious issue of course is that Gojo took everything onto himself. He took Marin’s discussion about a convention happening in a couple weeks as a set goal that they needed to hit. I won’t blame him too hard on that front. I had at least believed she did want to attend that convention. But even her words didn’t quite line up for that. It was more on the level of “there’s even a convention happening in two weeks, that’s how common they are.” I figured the most dramatic it would have to be was talking her down about going too soon to a convention. But I didn’t even think it would be that big a deal since Marin has been pretty reasonable. She understands that this is something that Gojo has to go out of his way for and is a lot to get done.

Gojo just couldn’t quite recognize all that. He interpreted her words as a deadline and didn’t want to let her down. And things continued to just pile up. His grandfather got himself hurt, exams were on the way, and it was a lot for Gojo to handle when hitting that deadline was near impossible to begin with. Of course, if Gojo had stopped to think about it he would have been fine. There’s no way Marin with exams and everything else would have truly expected him to finish that outfit in a couple weeks. But that’s Gojo. He’s let people use him, he’s held back from interacting with others, and the idea of reaching out and talking about issues isn’t where his head goes. 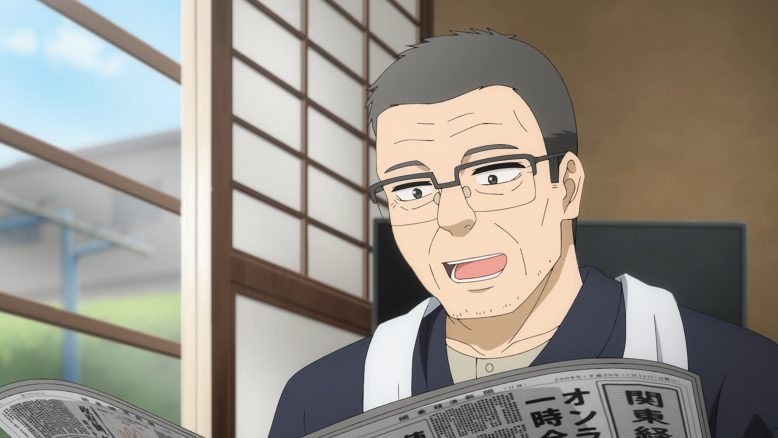 A lot of good flashbacks too

What is great about this though is how it played out. Often a show will either make the character fail and have to just learn a lesson. Or other times they’ll succeed and any mistakes won’t be registered. This time they try to handle both sides of it. Gojo actually managed it. He hit a wall and was utterly exhausted. But he powered through that and actually managed to finish the cosplay in that utterly insane timeframe. It was absolutely a victory for Gojo in pulling this off. At the same time though, the reality of it did hit him later. And Marin’s emotional reaction kind of hit home how he could have avoided a lot of problems by reaching out to her. While getting the cosplay done was fantastic, that didn’t mean she wasn’t feeling bad about what he went through to get there. 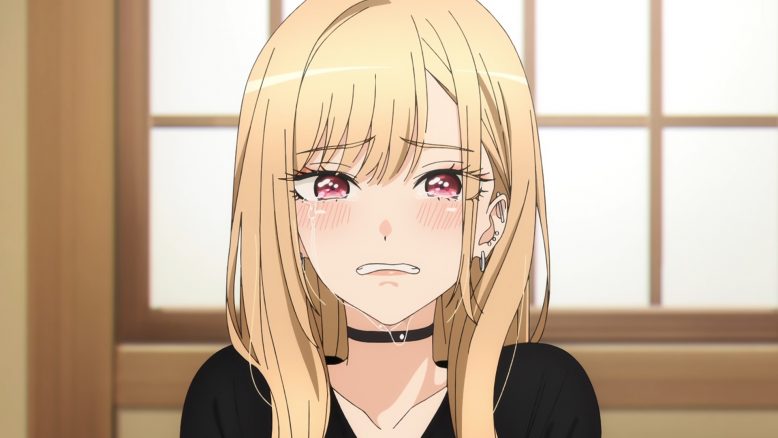 And Marin’s emotional reaction really was what helped sell all of this. It wasn’t her fault. The show goes well out of the way to establish that she wasn’t being negligent or pushing Gojo to go this far. She couldn’t easily get a hold of him during and after class. Her texts were either missed or Gojo didn’t have the time to reply. And there were multiple reasons for her to think he was working on the outfit, but not too hard. They talked about his grandfather which was a very understandable reason to think he had other things to handle at that time. She even tried to visit and check on him. But not finding him just further confirmed the idea that he was spending time with relatives and taking care of his grandfather.

But Marin of course didn’t give herself a break for all of that. And that both confirms that she’s a really good person and allowed Gojo to realize that he could have talked to her more during this. It is nice that her smile is a reason he could power through difficulties. But it is still good to remember that she is not a customer. He can absolutely rely on her. Even if she can’t help with a lot of the outfit building process. 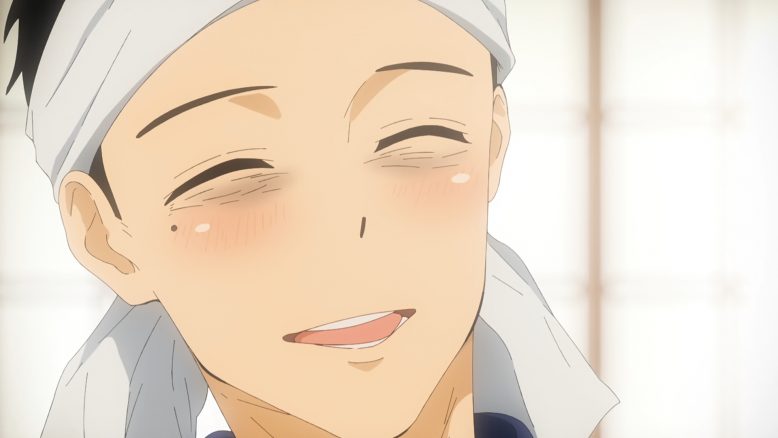 Glad that Marin got to see Gojo’s true smile

It wasn’t all serious though. Gojo’s smiling face really hit Marin hard. There’s no question she is in the process of falling for him. Gojo isn’t the type to notice all that so easily, but it is an important step for Marin.

And of course, she finally got to become Shizuku! I don’t think that Gojo’s dream will play out, but it is a really nice moment for her. Because it really did work nicely. This was a pretty perfect cosplay and honestly felt like the character popped out of her game and into reality. Hard work and attention to detail can lead to remarkable results. It’s a great moment for Marin. She’d dreamed of this and now it is finally reality. Now they can of course take her to cosplay events and also find the motivation to keep making more outfits. 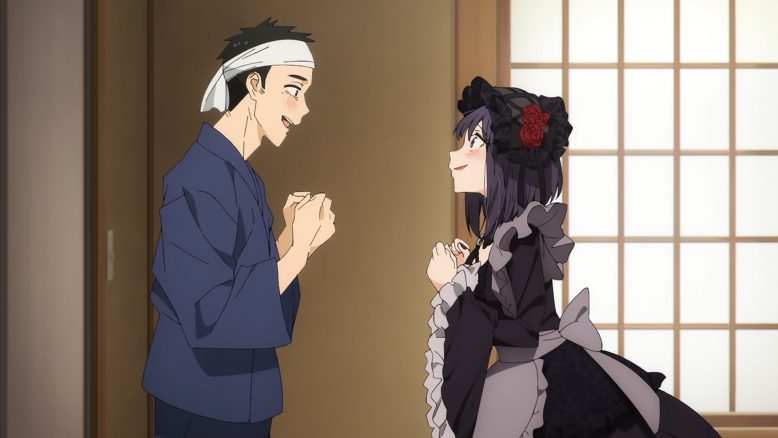 I love how happy they are

This was a really strong episode. Even if at times I had to stop to really get my thoughts in order about it. Definitely the episode that focused the most heavily on Gojo. It wasn’t completely lacking Marin, but she was used just enough to let Gojo shine in this episode. He’s a good guy and a good character. I’m glad to see things having worked out alright in this case.