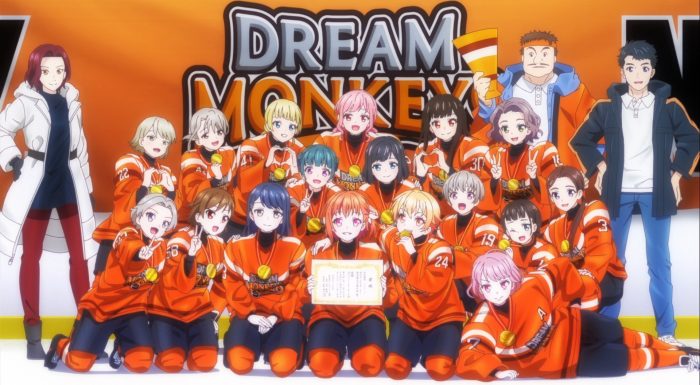 It is kind of nice to see a show saving its best for the end. That’s not to say that Pride of Orange managed to turn into a great show at the end. But it was kind of nice to watch an episode that was enjoyable. There was a lot less to criticize with this episode, although it still had issues. And they mostly focused on playing a game of hockey this time. If you ignore…everything after the 18-minute mark of the episode it was pretty good in that sense. There was back and forth in this game and plenty of chances for either team to just straight up win. If the show was more of this then I’d say it was a pretty successful outing for the first hockey anime. Too bad the show wasn’t mostly made of this kind of episode. 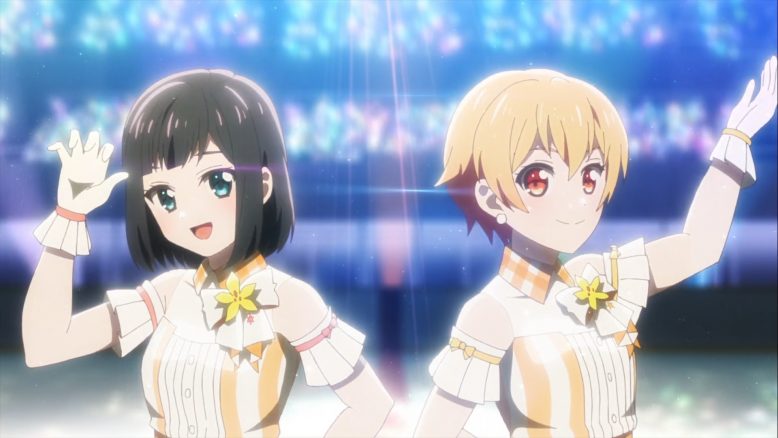 Might as well get the negatives out of the way first. This episode continues the major issue of ignoring that these are teams of over 20 people. You’d never know it since we never see a single other player actually playing in the game. Even when the teams are talking to themselves to plan things out…they do it at their respective net and ignore their team at the bench. I just would have liked one time to see someone who wasn’t a main character score and the characters being stuck on the bench during that play. Because that’s part of the game. You can’t control what happens when you aren’t on the ice. But that’s just not something this show wants to focus on.

The obvious other negative is the dance sequence, but I can save that rant for later. One other thing I’m a bit more critical of is not enough rival moments. I expected Maya to get…something in this episode. It seemed like this would be the episode that really developed her. But it just didn’t. The most we got to personality was her getting frustrated by not scoring and taking a penalty. Now that’s actually pretty believable and good. But it doesn’t really build off that. She’s still pretty much the same enigma she was at the start. You could have taken her out of the show, let the team Captain score the opening goal and directly replace Yu’s frustrations about carrying a team by herself. Maya being part Canadian didn’t matter. Her character was just the role of “star player” and that was it. 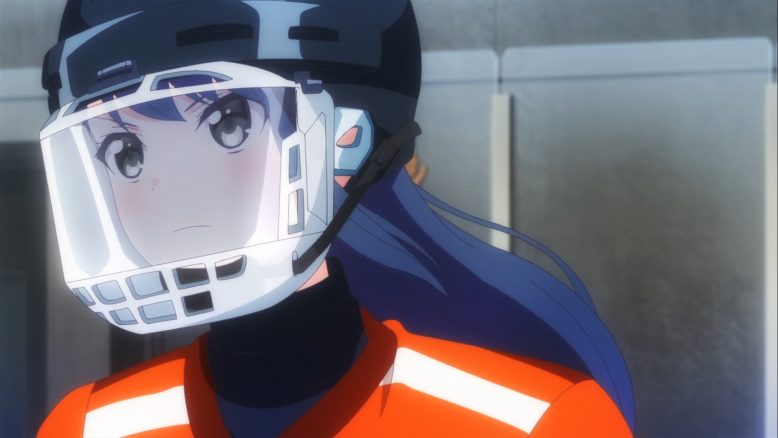 There was still good stuff here. Yu’s development from goal scorer to playmaker continued pretty well here. And I kind of like how it almost blew up in their faces too. It was really obvious after the first goal that they were trying to take advantage of Yu’s scoring threat to open up passes. So having Eri actually jump in and cut off a pass was a good moment. Almost too bad she didn’t just take it down the ice to try and score to create some real tension. But after holding onto it too long and nearly costing her team…icing the puck made the most sense. Still, it was a solid strategy. If they were going to cover Yu too hard then passing to others was the right play. 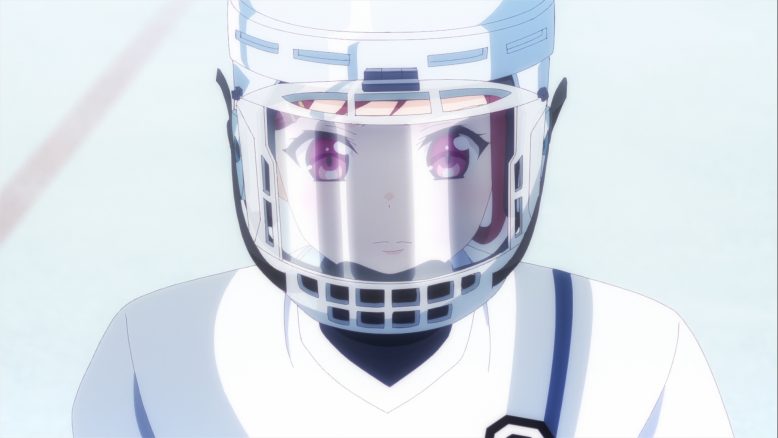 The only other character that really got an arc within this episode was Eri on the other team. A focus was certainly having her find a way to get through to her team to try. Not that it mattered since they only ever scored the one goal that Maya got in the previous episode. Part of me thinks having them score from that and having the main cast send it to overtime would have been the better narrative move. But in the end it still meant something for her to find a way to get through to them. The only difference honestly was basically not calling them lazy while criticizing them.

The only issue I had with Yu and Eri’s arcs here was acting like Yu had been wrong to do what she did. Maybe she was more combative about it than necessary. But the real issue was the lazy play from Snow White and not taking criticism well. I’ll agree that cooperation is important for teams. But it should be acceptable to call out teammates when needed. That seemed to be accepted by the Dream Monkeys. The main point is still good though. Don’t rely exclusively on a star and get along with your teammates. 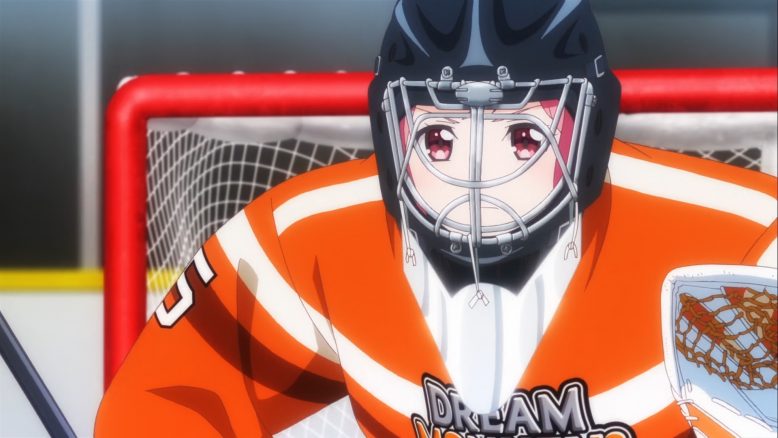 She also had a good game

That was basically the episode. There was a nonsensical dance sequence, but that doesn’t matter to the actual episode itself. What we got was a pretty decent hockey game. They even remembered that penalties existed. As a self-contained entity this was about as good as the show could do. If it was at this level for more of the show then I think it could be called a really good first entry for hockey in anime. Not perfect, but a good start. At least this show left a pretty good impression. Getting the ending of a show right is worthwhile. It is something to look back on the show fondly for. 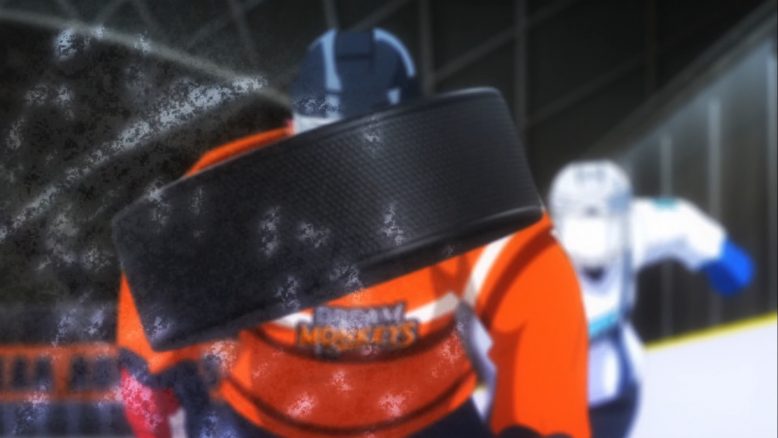 Maybe the last time we see a hockey puck in anime

It’s just too bad the show overall was pretty mediocre. This is not a bad show. The animation was fine, the hockey itself wasn’t too bad when they focused on it, and the slice of life portions were passable. It just wasn’t a fantastic show in any particular way. If the last episode wasn’t so solid, I would have had a really tough time complimenting the show on anything. So, in that sense I’m really thankful the final episode was good. It showed the potential of a hockey anime if they do things right. Because even with the show’s somewhat flat main characters and dance sequences, it could actually do the hockey right if it tried. 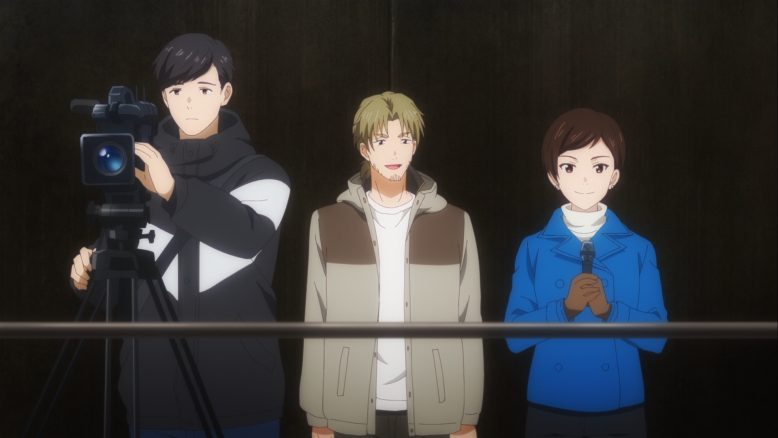 The problem for this show is that it didn’t do many things well. A huge focus of this show is slice of life. But that only works if the characters are good. The only character I actively disliked was the head coach of the Dream Monkeys. And in part that’s because she was spearheading the idol stuff. If she was just focusing on the hockey itself, she’d have been a perfectly passable character. She still wouldn’t be a good character with her stalking Yu and twisting her arm to make her play. But at least I would have had fewer issues with her. 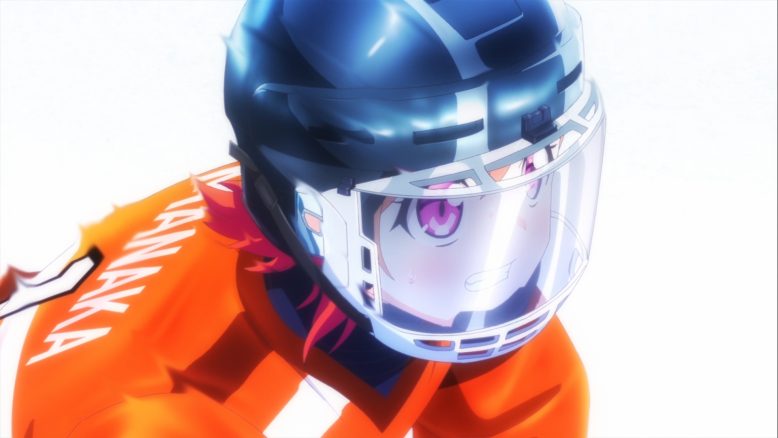 Everyone else is just pretty uninteresting. Manaka is just…there. She doesn’t even really have any arc to speak of. She gets interested in hockey, starts playing it with her friends, and that’s about it. As far as main characters go, she’s basically regular oatmeal. While I didn’t love how Yu was brought onto the team, at least she had a character arc. Definitely the best of the cast in terms of being a good and likable character.

With Naomi I again didn’t like how she was emotionally blackmailed into joining, but at least she was a likable character. Riko being the one doing the blackmail was a bit mixed. She was at least upbeat, but I wouldn’t say she stood out too much either. Kaoruko had her singular character episode and was mostly in the background otherwise. Not unlikable there though. Ayaka also had one episode of focus when it came to barely making the team in terms of physical ability. Then she was immediately used as one of team’s top defenders and never stood out again. 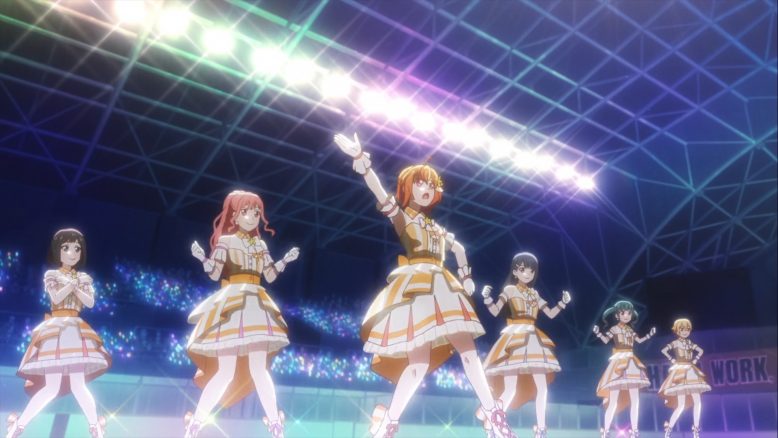 Mean, but I wanted to see someone fall

The idol stuff was honestly a terrible choice to make. It was obviously just there to try and make idol fans give this show a second glance. Even the show was pretty transparent about why it was there. The problem is that it never made sense within the show. How are they actually dancing on ice? If the laws of our universe don’t apply then they don’t need to be wearing skates at all. They should be able to run just fine on that ice. There’s no attempt to make it work with them wearing skates. I mean come on, one of the main characters was in figure skating. There’s no attempt to even justify their singing ability. They are in the embroidery club!

Why were they even in the embroidery club to start? So Mami could make the team motto? Embroidery could have just been her personal hobby. Manaka already looks like a Love Live character. Just make them be in an idol club, a dancing club, or even the school choir. Something more than pre-skating dance routines to explain what we’re seeing here. Suspension of disbelief is needed in fiction. But this show didn’t do enough to deserve that. I sure hope they somehow managed to draw more eyes to this show than they turned away by forcing post-game idol performances into it. All the more so since the idol stuff was under 10% of the show. 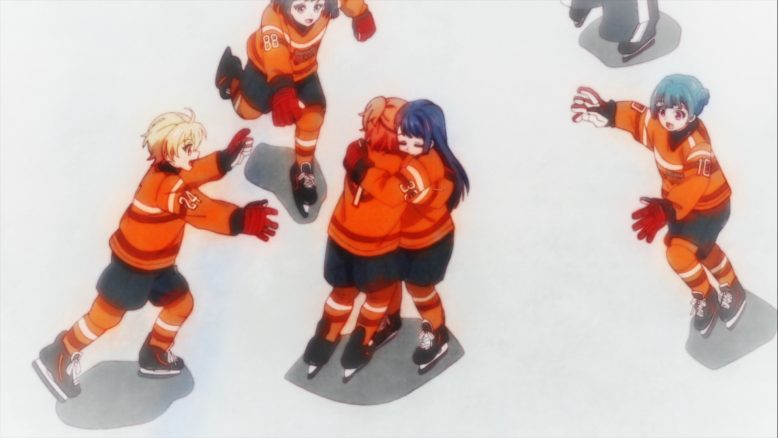 At least it ended well

I knew going in that a hockey anime could be a swing and a miss. It’s the first time this sport has gotten any real attention in anime. But I thought that a mediocre or bad show would be obvious right from the start. The previews were actually pretty good on making this look like a solid sports drama. But there really wasn’t all that much drama. Mami leaving didn’t hit that hard since the characters weren’t all that interesting. The one good thing I’ll say is that the show didn’t look horrible. They could have put in a lot less effort than they did.

Unfortunately, I can’t say the show was good. The characters weren’t that interesting, the rivals (Snow White) were mostly underdeveloped, and they really struggled to handle the size of a hockey team. The only solution they had was focusing on their handful of main characters and never showing anyone else playing. I hope this isn’t the last time we see a hockey anime. There is definitely potential there and honestly baseball anime has proven you can find a way to make a larger team size function in sports anime. At least hockey had a shot when it comes to anime. Thankfully that one shot was at worst mediocre. It would have really hurt as a fan of hockey and anime to have this show be absolutely terrible.