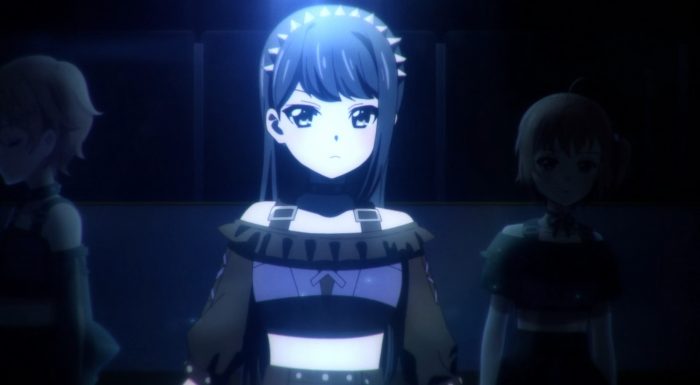 At this point I’ve accepted that this show will be a weekly exercise in seeing what drives me crazy XD. Truly a test on whether an anime based on hockey in and of itself makes it tolerable! Not a good sign when I was actively resisting the urge to roll my eyes at Yu getting that stupid warming up video. There’s no point to pushing the idol thing! If people wanted that then they already dropped the show after it was barely brought up after the first episode. All they can do is annoy the people that don’t want it in there by pushing it near the end. It just seems like a really bad idea and the worst of both worlds. 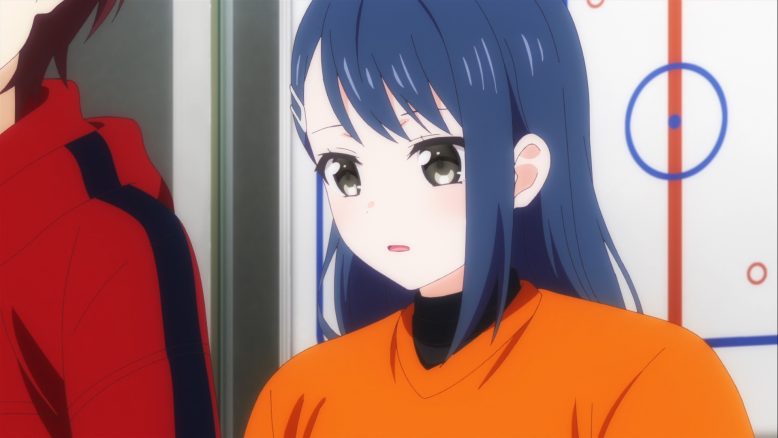 The show didn’t want me laughing at the irony of apologizing for Manaka forcing Yu to join them for lunch. That’s the forcing that makes you feel a bit bad? Not the forcing to take on playing a sport that she already quit? I feel like one is much more intrusive than the other. But, might as well move on from that since the show already has! And presumably Yu isn’t going to realize that she’s not under any contractual obligation and can actually quit again anytime she wants.

I mean if we ignore the incredibly questionable means of recruiting and keeping her on the team…it’s not all that bad. Yu herself is happy to have people supporting her. And even if Manaka is an idiot at least she’s an idiot with high goals. If nothing else their ambitions are higher than the team she was on before. So, there’s something to be gained. Now if they start clashing because she pushes too hard for perfection then we’re back to the original problem. But for now it’s fine. 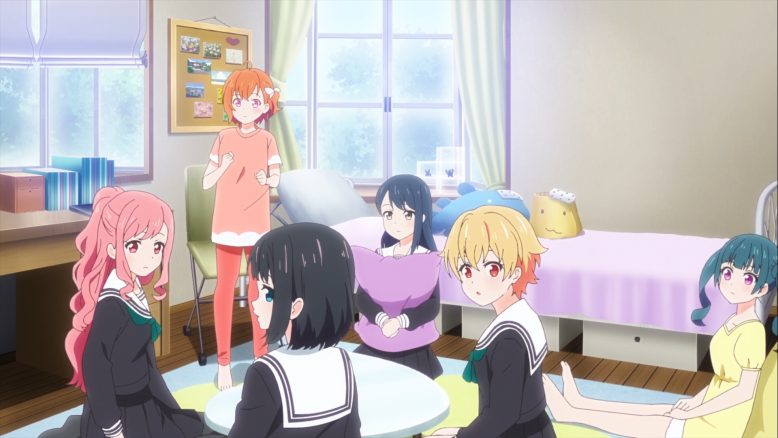 It is probably as much my problem as any. But I tend to see the worst in this show’s message. Like the idea that it doesn’t matter why Yu left her previous team. I mean…it kind of does. Ignoring an underlying issue is fine in the short term, but not in the long term. But of course, it doesn’t really matter since they were able to instantly resolve that issue for Yu. Still, it just sounds super selfish from Yoko. It doesn’t matter why she left her previous team because the Dream Monkeys get to use her talents for their own benefit…

Now it does make Yu feel better right now which is good. She’s already been manipulated into playing for this team. So bending over backwards to make her happy and comfortable is the least they can do. Even managing to resolve her actual issue without being too hard on her. They could have had a real blow up with Riko, but instead they just let Yu do her own thing and smoothly brought her on board when she couldn’t skate through a whole team. 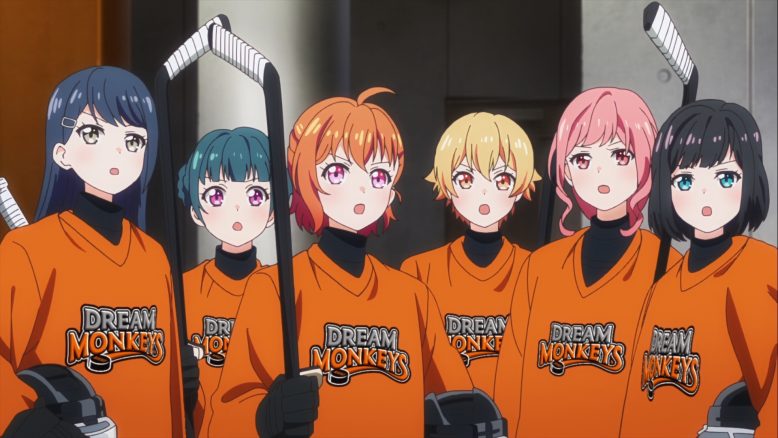 The only characters that matter

Makes sense for the girls to mostly hang out in a group. But it feels odd to basically ignore the other players. They could logic it out with a scene showing the different age groups mostly hanging out together. But without it the show just points out how those other girls are just extras there to fill out the roster.

The game itself points that out painfully. Presumably the other characters were playing in this practice game. However, their other lines neither scored nor gave up a single goal while the main characters weren’t on the ice. It just feels like a reminder that the people making this show don’t understand hockey in the slightest. They need to acknowledge the other players on the team even if they don’t get any character focus. It doesn’t have to be Ace of Diamond where you try to give attention to a pretty large group of players. But it has to nod that the other players are actually playing and the main characters aren’t on the ice for 60 minutes in a game (well besides the goalie). 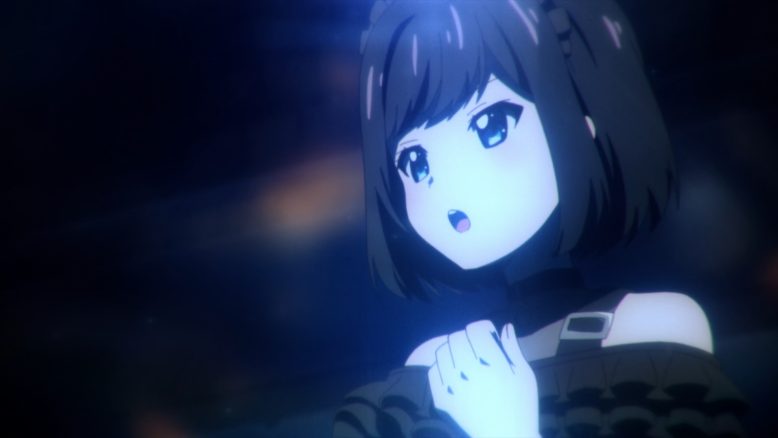 The Victory Dance was all kinds of nonsense. Again, how are these characters dancing on the ice! I don’t see a mat. They are just asking to get these girls hurt. Ironically the logic isn’t completely off base to use something fanservicy to try to get eyes on a niche sport. But they aren’t even doing it well or setting it up properly. How do these girls know this song? They just did basic movements during warmups. There is no way they have a set choreography. Much less likely is that they can nail it perfectly in outfits they’ve never worn before. I feel like they are insulting idols while trying to use them to advertise the show.

Anime is rarely realistic. But the show could at least try to remain coherent within its own universe. If they’ve got magic boots to run on the ice, then why are they even using skates? They have a character that used to have a dream of figure skating. Why isn’t it a figure skating routine? And why not have the whole team perform then? Are the main characters the only ones worthy to celebrate wins with a victory dance? 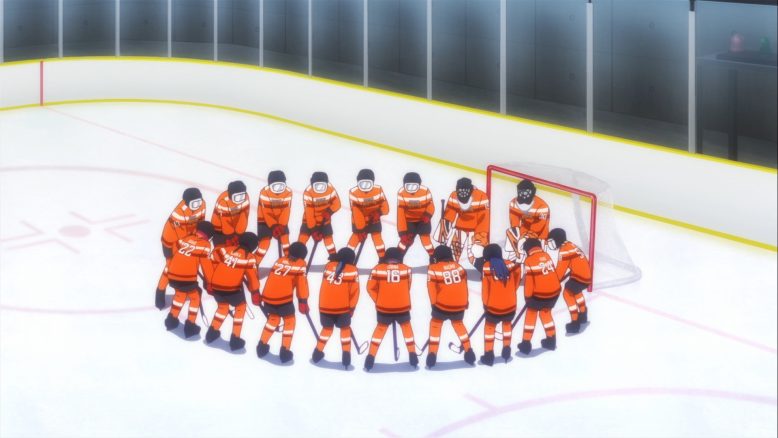 Blink and you’ll miss the rest of the team!

If we can just ignore the ending then the episode was fine. They fairly instantly worked through Yu’s issues and now she’s completely a team player. Kind of makes her old team look pretty bad that they couldn’t manage that XD. But really they are in great shape. Since the other members of the team should effectively be ghosts that should make things really easy for the main characters. They have the best player in their league. If the other girls can just support her properly then they should have a pretty easy time winning this group and getting into Group A. Of course, that still depends on the other girls besides Yu getting better. But at least they have less variables since it only depends on their group of 6.