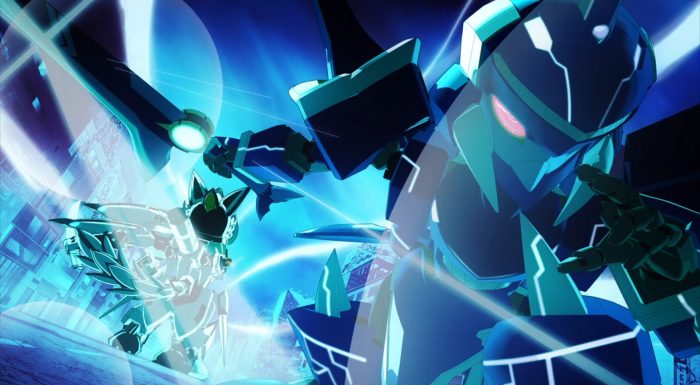 This really is the season for original mecha anime and I’m all for it. All the more so when we get a show that is as fun as this one and has the potential to be pretty good. This show just seems to ooze fun with how it has set itself up, the mech designs, and the apparent direction for the main character (Kudo). If nothing else I’m a bit invested in seeing if this show can manage to balance things out throughout the whole show. It has a great deal of comedy going for it, some action, and definitely playing into a theme both for the show itself and the character arc for Kudo. If it can pull that off it should be a lot of fun to just enjoy the antics and see the characters maturing without completely losing their ridiculous personalities. 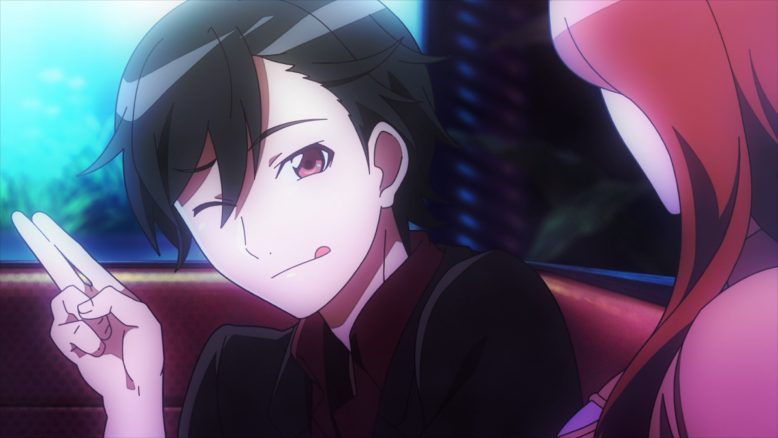 Quite the act he’s putting on

There’s no ignoring the fairly obvious direction with Kudo. He’s a person that literally blurs his vision when sinking into a job he doesn’t care at all about. Of course, since his job was being a host that kind of works anyways. It isn’t like he can afford or expect to build long term relationships with the women coming there for a bit of fun. There’s a ringtone on his phone that he never acknowledges, but at the same time he doesn’t change it either. He stumbles his way through interactions with customers since he can’t really see what he’s doing and most of the time it works out since no one really cares to look right at him either. Well, the only person who did was a future enemy that was there to scope out place…before burning it to the ground.

It’s easy enough to see where his character arc will be going. For obvious reasons (considering the state of the world) he’s completely buried his true self. Or at the very least he’s abandoned the passions he’s had his whole life in order to survive. Paying off familial debts while playing an empty character has been his life. But now with Akagi he’s got a chance to recover himself and grow. Steadily he can stop faking his feelings and embrace the ridiculousness of his situation and have fun with it. That in itself will be the actual power source to fight back against oppression. 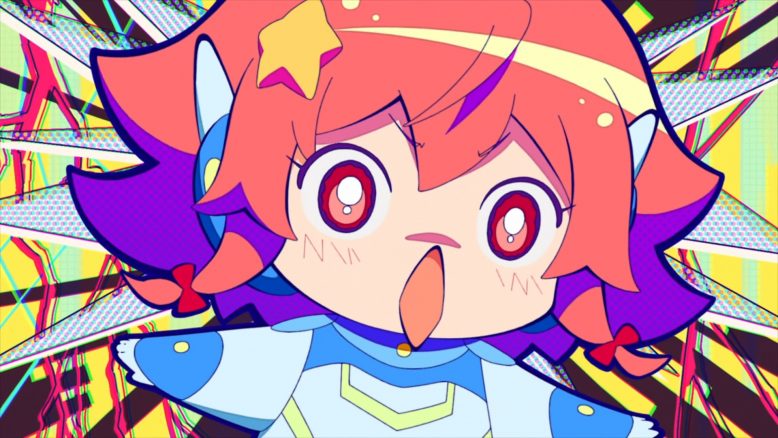 She had some great reactions

I like the dynamic between Kudo and Akagi. At their best they will actually suit each other really well. She still has her childish passions even if it does lead to problems with the machine itself. If she’s not fired up then the machine isn’t moving. They both have a love for the same classic anime. Akagi is just more willing to admit that than Kudo is at present. Heck, he can actually inspire her with a better way to look at a classic phrase from that show. Things didn’t end all that well for them this week, but they did have some serious high points when they fought off a pretty serious enemy to deal with right out of the gate. Their continued growth and interactions will likely make or break the show.

One thing I also appreciated was that Akagi’s initial interactions were in that chibi form. Since I only looked up a few things about the show I didn’t know at the time if she was a real person or if she was actually just an AI that would have a bond with Kudo. If she was that would have made a couple original mecha series this season with AI companions…Instead she is quite accurately called a battery girl. She’s in the back of the unit and will interact with Kudo in that chibi form during the action portions. While outside of battle she can hop out of that thing and interact with him as a regular girl. I’m curious to find out if she’s completely human or actually created in order to power the machine. 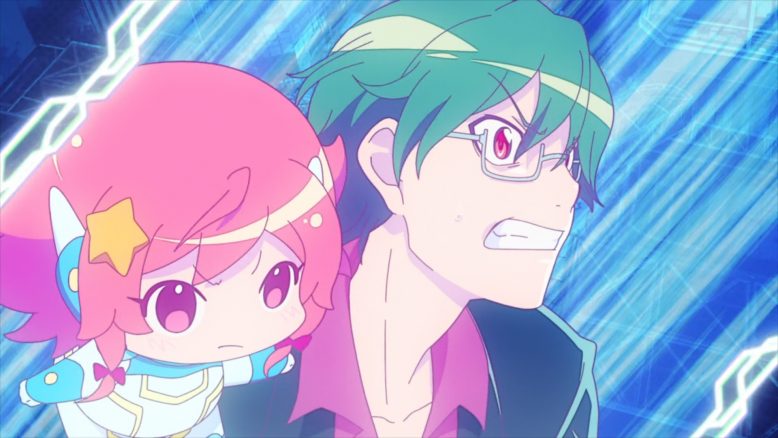 There wasn’t that much action in the episode, but it was pretty fun. I liked Kudo just getting pissed off early on and beating up the enemy grunts with punches. Only for Akagi to lose interest in fighting like a punk when she wants to be a hero! Naturally the best part was finishing the fight with a big sword summoning action sequence. This is how good they can be just with Akagi and Kudo feeling things out. If they can build a legitimate bond, they could do some crazy stuff. Still, I loved the video game style cut-in for Akagi and Kudo before they unleashed their actual strike. Definitely reminiscent of what you’d see in a mech fighter style game. Obviously, that was on purpose and I fully support them doing it. 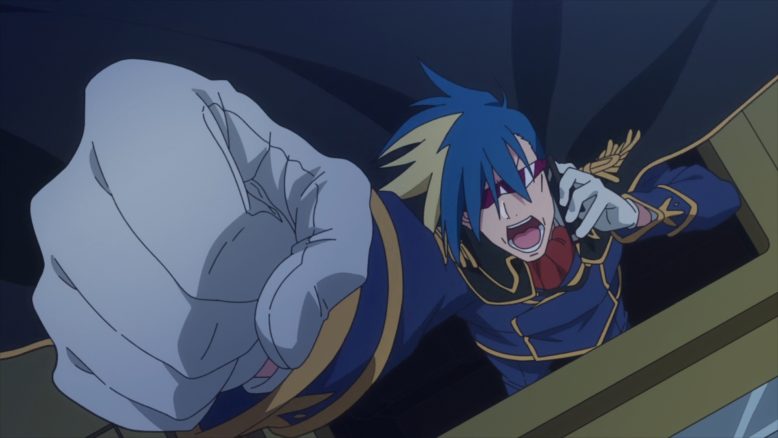 Living true to himself

One weird aspect in this show will be that the guy that owns Kudo’s debt…is coming along. I’m honestly not sure how this will play out. Whether the guy is going to get an arc when he realizes that bleeding some innocent guy dry for a debt owed by his parents is disgusting or Kudo will learn to stand up to him and refuse to pay him. I suppose he might just remain an annoying guy that is there purely for comedy. But I guess we’ll find out as it goes along.

To go along with him is of course Yamada…and wow this guy is a character. Definitely makes me think of Mikisugi from Kill la Kill or Tatsumi from Zombieland Saga. He’ll be a very over the top presence. But, at the same time he’s probably a fair character to have in all this. With a story about people fighting back to retake fantasy and fun in their lives, you might as well have the leader be someone absolutely ridiculous in an outfit that makes me also think of Kamina from Gurren Lagann. 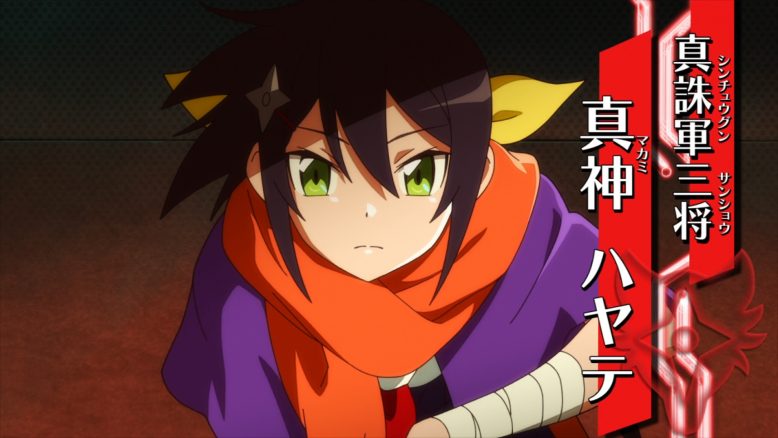 Ninja mech pilot on the scene

There’s no way to say for sure if I’ll end up covering this show either. But it definitely was fun enough that I didn’t want to ignore it. Serious shows are perfectly fine and have their place. That doesn’t mean ridiculous shows can’t say something worth saying either though. If nothing else this was a pretty solid start and I think it could turn into one of the more enjoyable series of the season. Fingers crossed that it holds up.

in Gyakuten Sekai no Denchi Shoujo