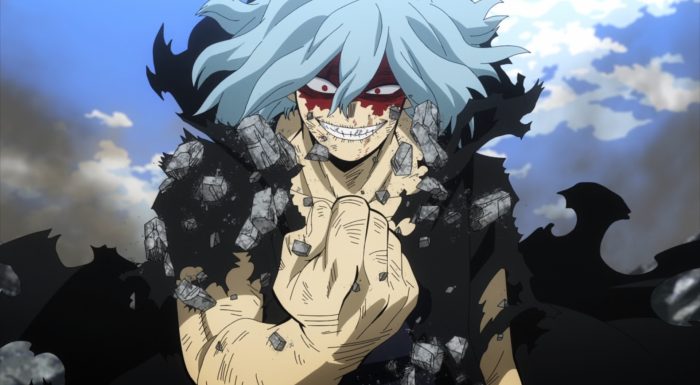 Well this episode certainly changed the status quo. It takes Tomura from a dangerous individual to one of the most powerful on the entire planet. He seriously went from someone that I think several heroes likely could have handled to one that I’m not sure any of them can handle. This guy can level a large part of a city in one move. And this is before he’s getting some extra powerup from the Doctor. That being something I’m not exactly sure he needs. Seriously is Endeavor supposed to deal with this? Or is this path with Tomura supposed to be the excuse for loading Deku up with a ton of different quirks? I’m still not sure that was a great story decision, but that’s a topic for another day. 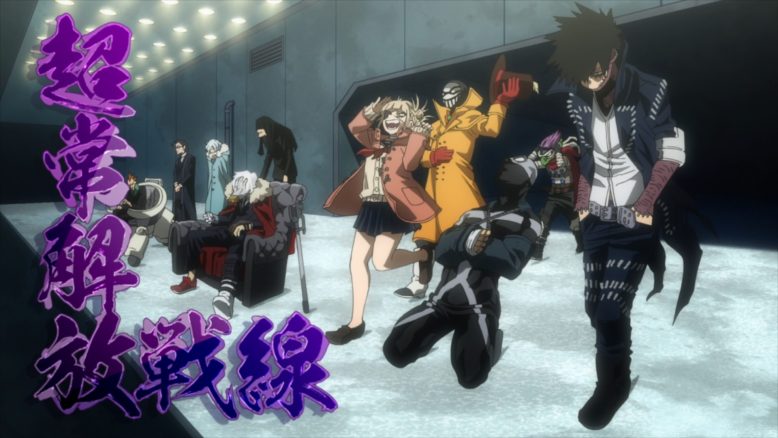 Tomura leveled up to wearing a suit

Honestly, I’m not even sure what the endgame is with Tomura’s power. There was a solid limitation to work with that he actually had to touch someone with all five fingers. Now he can just unleash a wave of death using the ground to take down just about anything that touches it. Sure, if a person can fly that at least helps them a bit. But we’re talking legitimate flight since if you have to coast to the ground at any point…it’s not good. And who knows what kinds of boosts he’s going to get from whatever torture is coming his way via the Doctor. Giving him multiple quirks doesn’t seem to be that unlikely.

That’s not to say I have a big problem with that. You do need antagonists to be threatening. That does allow the protagonists to grow in response. Right now though it feels like Tomura has left the main cast so far in the dust that I’m not sure how they are going to catch up. Although I suppose if Tomura almost overnight can go from a modest threat to arguably the most powerful (considering All For One’s diminished condition) then I suppose Deku and the main cast can grow powerful. I still feel they are limited by the nature of the show. Can they really become more powerful than all the pro heroes…while still being in the first year or two of highschool? That isn’t a huge burden for other shows, but this is a series where becoming a hero is literally profession. 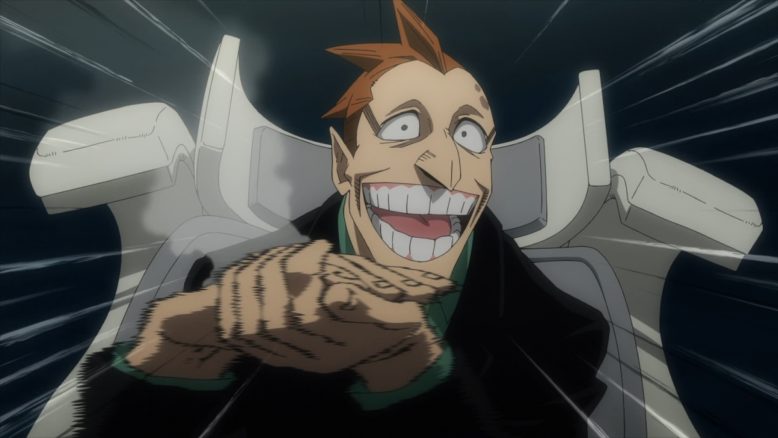 His friends probably wish he had died…

Maybe the most surprising thing was that Re-Destro didn’t die. Although I suppose you could argue it would have been better if he did. Because he somehow survived, he was able to gift the Liberation Army to Tomura. And it makes sense in that way. I can’t imagine how the League would have gotten this group onboard without the guy they actually believe in telling them what to do. Of course, it is hilariously ironic that a group all about Liberation can’t actually think for themselves. It was also pretty sad to see Re-Destro devolve to where he did. Somehow Tomura’s genocidal mania amazed him so much that he was willing to lend all the power and money at his disposal to his cause of…destroying things.

Honestly, I was waiting for Re-Destro to be hit by the stupidity of his own way of thinking. I expected him to be hit by the realization that unchecked liberty would allow someone like Tomura to thrive. That without some societal limits’ liberty is nothing but anarchy. But instead, he just kept on going with it. The only realization that hit him was that Tomura was a truly liberated person. That he was doing exactly what he wanted and so he was far freer than Re-Destro himself. And so, he just totally jumped into the crazy wagon. Treating Tomura like a God or someone of worship. Even though his followers were pretty evil…I kind of feel bad for them. The guy they trusted has basically fallen apart (on top of losing his legs) and now they just have to go along with it. 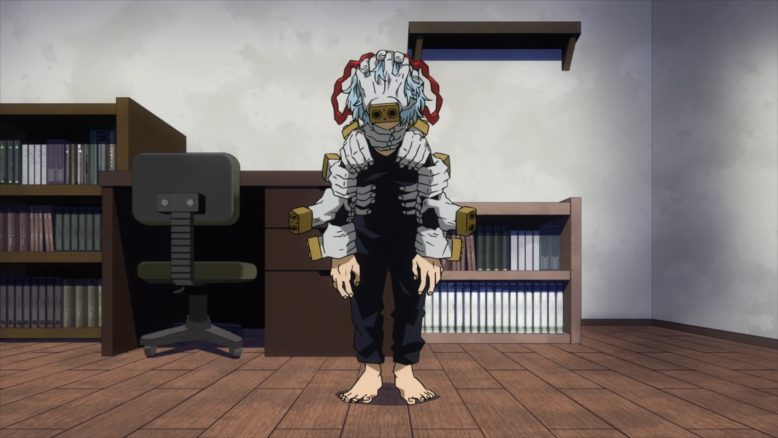 There is certainly growth in Tomura’s character. Which it is fine for bad guys to mature and learn from their mistakes. Tomura realizing that killing Re-Destro would be easy, but using him was far more valuable. After all, if he just killed the guy and his followers then he would be left with nothing. Instead, he has all these resources and doesn’t simply have to rely on the scraps that the Doctor hands out. All that money is now at his disposal. I’m not entirely sure he has a rock-solid plan for anything, but he is getting stronger. I suppose it is fine that all his power just made Machia finally submit without actually needing to beat him in a fight. It does allow the story to move along without wasting too much time.

Tomura’s backstory was developed a little bit more in this episode. But it wasn’t a lot that we didn’t know. The only details that really stood out was the explanation of Tomura’s name. There was a bit of explanation for all the hands and an attempt to garner more sympathy for Tomura. Since didn’t immediately kill those jerks…just killed them later. So that’s nice. They got a few extra hours to live. Not sure which hand is actually left over after he lost/destroyed most of them. Kind of glad he kept at least one hand since it is a trademark of his look at this point. Though I’m not sure how long even that hand is going to last in all honesty. 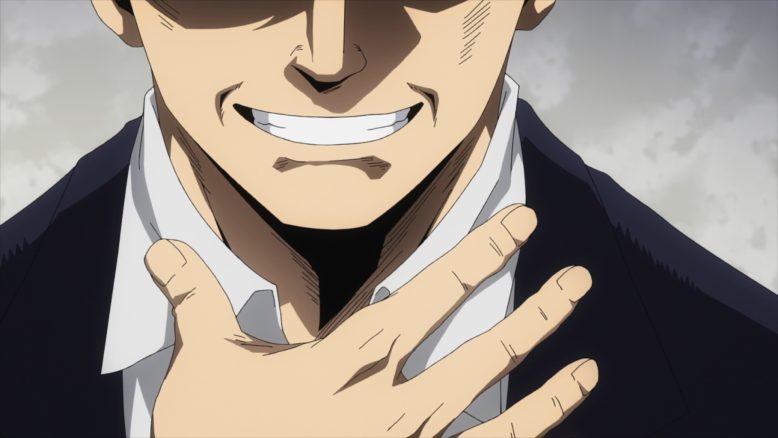 He certainly made the monster he wanted

I guess the next episode will be setup for the following season. We’ll get back to the main cast and show how the heroes have realized the danger that is coming and are being forced to ready to themselves. They have decent numbers which is good. But I’m not exactly sure they have the pure firepower. Endeavor is pretty strong, but he could barely beat that super Nomu from last season. What can he seriously do against Tomura, Machia, and the rest? I suppose he won’t have to fight everyone by himself, but I’m honestly not sure the heroes have the numbers with Deku and the others still too immature. But I guess we’ll find out…next year. They can only do so much with what is left from this season.