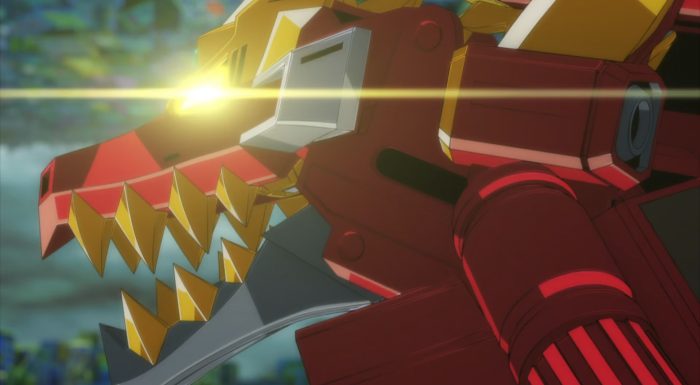 That really was a fantastic finale. You always hope a show can finish strong no matter what kind of series it happens to be. Dynazenon is a show that I’ve enjoyed the whole way through, but the final episode was still going to matter when it came to judging the overall experience. Thankfully they gave me everything I could have asked for. The action was excellent and I had a blast just watching it unfold. They didn’t leave out the various forms or just stay with Kaiser Gridknight for the whole thing. On top of that they allowed enough time for a proper conclusion and epilogue. It was a good thing they let the previous episode also function like an epilogue so this one didn’t have to do as much work. Overall the episode left me smiling and looking forward to the next series in this Gridman universe. 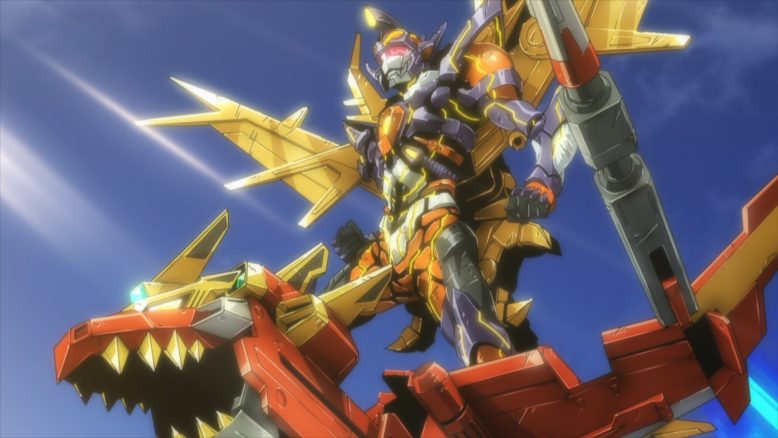 The action was everything I wanted. I was really hoping to see forms like Dyna Rex. But I wasn’t sure if it was really going to happen. Thankfully they really did fans a service by showing off as many forms as they could reasonably get away with. We still got to see regular Dynazenon along with a very satisfying “Battle Go” which they just can’t skip for a major fight. Gridknight and Goldburn got their own unique combination which was awesome. Fanservice can be simplified to just showing more skin in anime. But this was pristine fanservice here. The various forms all got their chance to shine and they let the fight end with the form that first got the job done in episode 1.

I loved the action, but there’s almost not much I can say about it. It was tough going for Gridknight and Goldburn with them carrying the Kaiser form by themselves. Of course the team coming together changed the whole picture. Even with Gauma on the verge of death they put up their best battle yet. The first time Gauma had to carry the team since he was the only one with the slightest clue what he was doing. This time the team carried him and he hung in there as best he could. This fight had so many great moments. But the ending really sold it. Gridknight delivering a final punch while Dyna Rex straight up head-butted their enemy into dust. Just perfection. 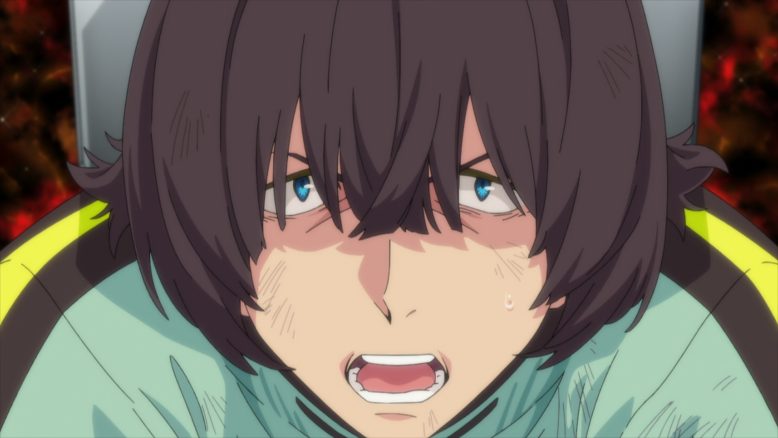 What made this show work was the main cast itself. The first episode gave it to us clearly. “Scarred souls shine like stars” was the message and we got to see it here. All of these characters were suffering in some way and by the end they carried literal scars from their battles. But the important thing was that they all knew what they needed and wanted to do. Koyomi was dragged into this by total coincidence. He was just at the right place he fell over so he was taken in. Chise could have easily ended up in the unit herself if events had gone differently. But by the end Koyomi chose his path.

Koyomi decided to fight and he took the brunt of Mugina’s anger. He found a path for himself while she only despaired in feeling like she had no path beyond being a kaiju user. It explains why she was so enthusiastic in battle. This was all she had so she’d give it everything. But while he apologized for making her feel like that, he still stuck to his path. By the end he was even willing to lean on his ‘sort of ex’ and her husband to find work. He’d matured enough to know that he had to do something like that to get anywhere. Plus he did save her husband’s life. Fair enough to say they owed him. 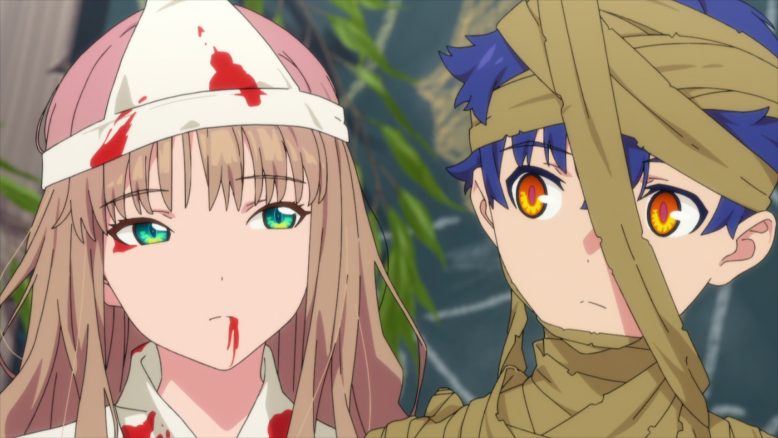 Certainly my favorite couple of the season

The best part for me was Yomogi and Yume. Whether it was right before the final battle or in the epilogue…Yomogi went out to find Yume. His growth was straight forward and clear. Through her he found something that mattered more to him than his own issues. And I kind of like that they didn’t have to bother with showing Yume responding to his confession. The results speak for themselves. First names are being used and everyone knows to send him to find Yume. She obviously returned his feelings after the battle. Yume wouldn’t leave him hanging for three months XD. The show knows how to handle things with the right touch. Just some light teasing when Yomogi did finally call Yume by name and they moved forward. Both carrying their scars, but definitely happy together.

We did finally get some resolution when it came to Yomogi’s ‘kaiju user’ powers. Not so much why he has them since I’d say it was just a work of fate. He’s probably not the only person in that town with the potential to control kaiju. Yomogi simply happened to be the guy that could do it within the team. While he had the power he didn’t want to rely on it and he didn’t let it control his whole life. Sizumu may not understand, but Yomogi found something more important than the insane powers that kaiju possess. At the same time Yume already found her peace like we saw in the previous episode. She’s handled her grief and can move forward with the guy she likes. Not a bad thing after the emotional rollercoaster she went on. 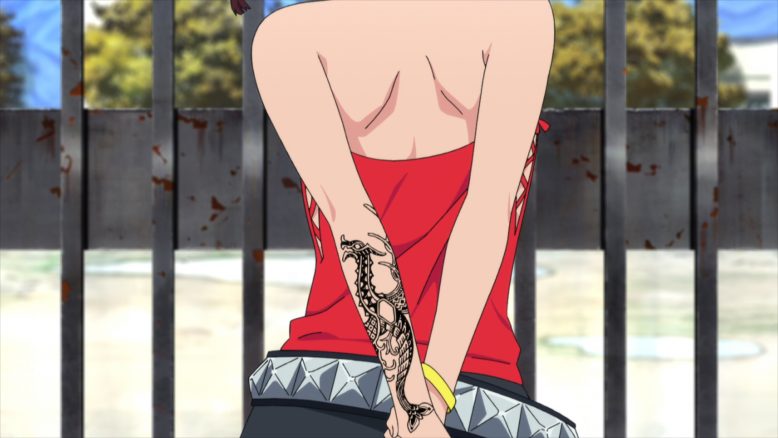 I’m glad Chise did figure things out. Thankfully she was given enough time to process things. There could be any number of reasons they decided to wait to leave. But I think one of them was respecting that Chise needed time. Goldburn was her friend and a kaiju that responded to her feelings. By the time he was gone she at least had enough time to take steps forward. She didn’t lose her connection to the other members of Dynazenon and Koyomi specifically. Their lives are changing, but her cousin will still be there for her. And I’m glad she’s willing to show off her tattoo. Even if school isn’t quite a place she’s comfortable with, at least Chise is willing to face it now. 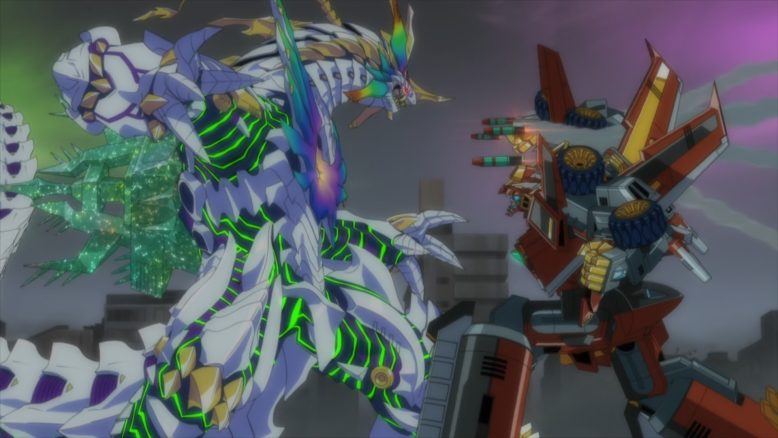 Honestly I didn’t expect to enjoy this as much as I did. It was in my top section of the season preview to be sure, but I didn’t know how it would turn out. It was more the concept and the type of show that had me interested. For me this show well surpassed Gridman. I know that for some they felt differently and Gridman worked out better for them. The shows had different focuses despite being equally well made. Dynazenon was about the characters themselves and their connections. It wasn’t about explaining the nature of their world, the villain’s motivations or unraveling a mystery. This was just about a main group of characters who were all damaged to some degree. It was about their journey to grow past their pain and to let their bonds shine. They came together because they were damaged and different. 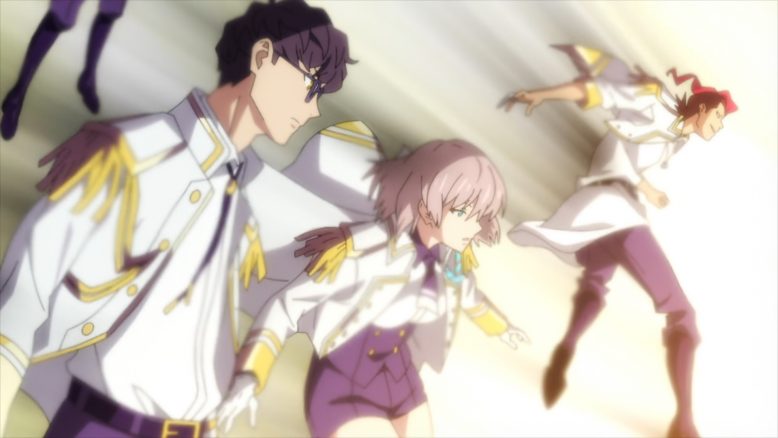 I can understand how some would have liked the villains to matter more or to have more detailed character arcs. They were simple in their role and how they played out. All of them were effectively ghosts that were obsessed with the past. Onija couldn’t let go of his anger and just wanted to kill people. He cared about his friends. But he was obsessed with the betrayal of his country and Gauma. Mujina couldn’t find a path different from being a kaiju user. Despite talking with Koyomi she just couldn’t find anything else. Juuga couldn’t let go. He remained obsessed with Gauma and with the kaiju. Even at the end he could only think about the future of the kaiju. Sizumu as well just couldn’t think of anything but the kaiju. He understood them to a degree and believed in their fantastic potential to break the bonds of reality.

All of them were trapped by their pasts and couldn’t move on. They were the opposites of the main cast in that sense. Yomogi and company faced their pain, built bonds, and moved forward. They gained something instead of obsessing over what they’d lost. 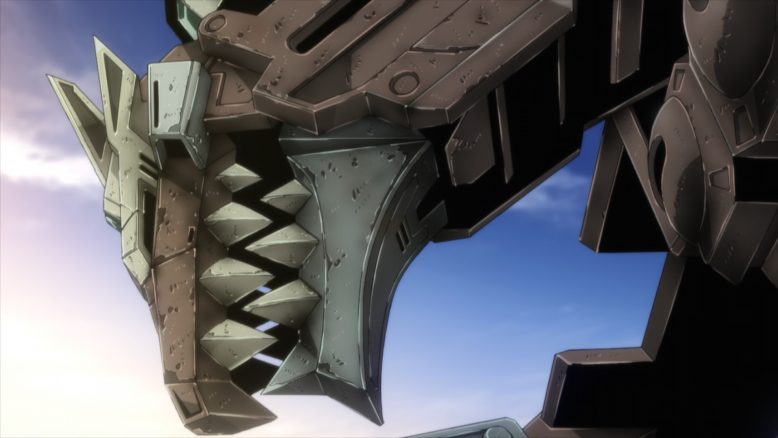 This show had a lot going for it in my mind. The action was beautiful and exactly what it needed to be. This really was a classic kind of fight that matches the source material. You have these big and bulky enemies that resemble people wearing costumes and fighting the heroes. It really did make me feel nostalgic for the days of watching Power Rangers as a kid. The combination units come together, they put up a good fight against the monster of the week, and then take him down with some over the top move. Of course it just works fantastically in anime since they can do some crazy stuff like rocketing an enemy into space before destroying them. I could conceivably think of fights I’d have liked to see them do, but the ones we got did fulfill all my hopes. 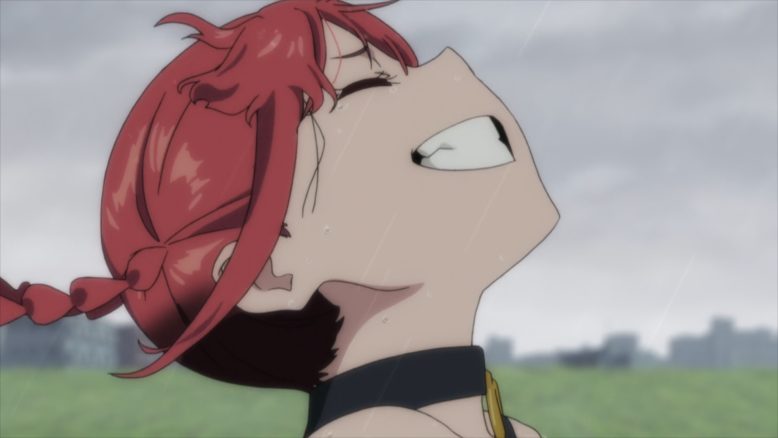 I can’t speak for everyone. All I can do is put my own thoughts out there. But for me this was easily the anime of the season and a real contender for anime of the year in the early going. I liked the characters, the action and the story gave me more than enough. There is clearly going to be more from this franchise in the future. I can easily see Dynazenon appearing just by itself (possibly possessed by the spirit of Gauma). But part of me would love to see Yomogi and company return as pilots of Dynazenon again. Regardless, I look forward to the coming Gridman x Dynazenon series. I’m fully behind that in whatever form the series takes. I’ll miss this show, but I’m glad I got to watch and talk about it.