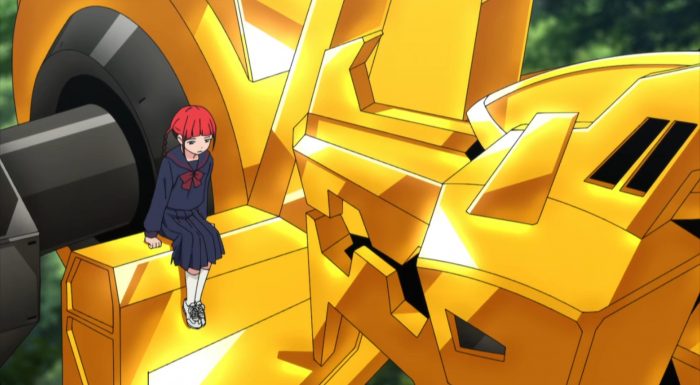 This show is just about over. No question that I’m going to really miss it after the finale episode airs. This episode kind of felt like the series epilogue with the various members of the cast trying to take steps forward. The battles appeared to be at an end and many of them were able to use this opportunity to express their growth. It was nice to see Koyomi deciding he was done hiding away at his place and wanted to get out into the world. Even though he was shocking the heck out of Chise while doing it. We also got to see Yomogi and Yume really progressing their individual and unified arc as a couple. At least we would be talking about that last part if Sizumu hadn’t gotten in the way! And of course there’s a lot of heavy stuff going on with both Gauma and Chise. 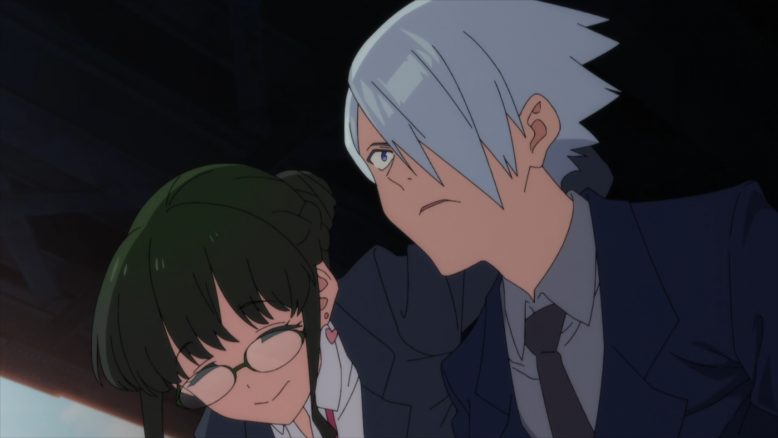 Chise’s situation is a tricky one. The others in the cast have grown quite a bit and are ready to take steps forward. But Chise just isn’t ready for that. What pushed her forward was honestly that she is set to lose her safe space in Koyomi’s room. The biggest change for Chise was that her feelings lead to the creation of Goldburn.

And even he might end up being taken away from her. It is understandable for Second and Knight to want Goldburn to go with them since a kaiju hanging around could be problematic. But at the same time it would be far too painful for Chise. The natural and normal way for things to go would be for her to learn to stand on her own and return to school. But is that the way it will go? Can’t Chise just leave with Goldburn? It isn’t as if no one cares about her. Koyomi would miss her as would the others. But, Chise just isn’t as attached as everyone else. I think if the chance to leave was presented she’d take it. 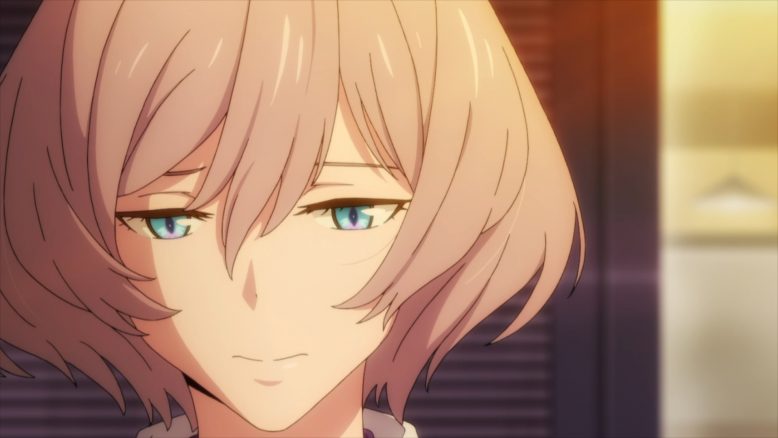 It was nice to see Koyomi out and trying to change. This series and especially the last few episodes have really let him put the past behind him. He can live his life regretting not going with the girl he was interested in or he can let it go. Hard to say where his life will go from here. But at least he is trying to figure it out. He’s still got this weird connection with Mujina which I find interesting. She at least claims to hate him, although I’m not sure she’d go out of her way to talk with him casually if that was true. Or maybe she’s still holding the whole ‘tackling her to the ground’ thing personally XD. I wish him the best of luck in his job hunt. 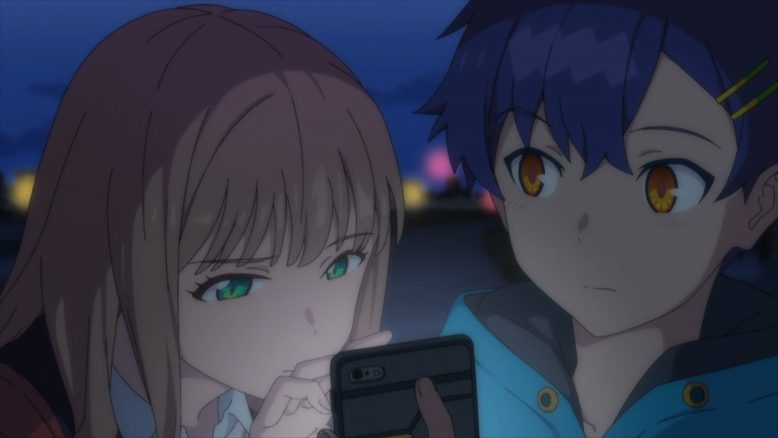 I give major points to Yomogi’s grandmother. Thank goodness she was backing him up. This episode was a reminder of how weird Yomogi’s mother is. I get that she wants her boyfriend and her son to get along since you never know where things will go. But her obsession with dragging him along seems really weird. Here’s a message that may be shocking to Yomogi’s mother. He’d much rather hang out with the girl he likes than with his mother and her boyfriend! Yes, even if that means visiting a grave. That’s still a more enjoyable time for him. Give him some space!

At least things went his way for most of the episode. He got to spend all this time with Yume and it means a lot having her invite him to go visit Kano’s grave with her. She’s a lot more comfortable with him now and able to joke around even more. So it was pretty good timing overall to confess to her. I’m sure it would have worked out, but we’ll have to wait another week for her to get the chance to really respond to his feelings. 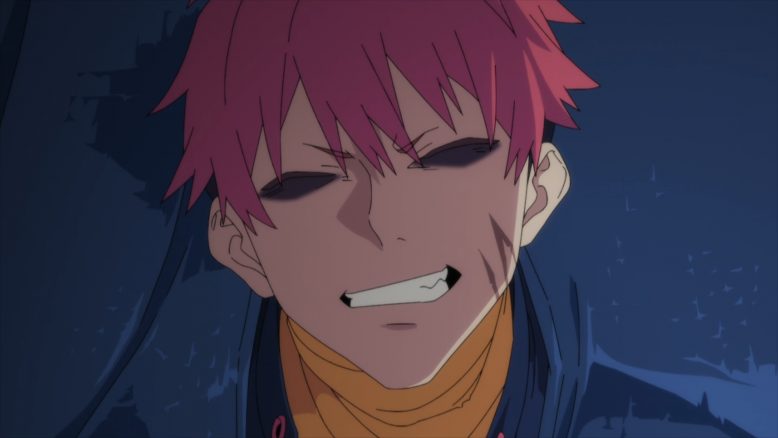 Gauma’s situation is pretty dire though. He’s just straight up dying. My condolences to him since that is a pretty sad situation. He came all this way hoping to meet that Princess again and he’ll likely die without getting to do that. Of course the sad idea that was brought up was that the kaiju power that revived all these characters could only do so for kaiju users. Since the Princess presumably didn’t have that power herself…she couldn’t meet up with him. I suppose in some ways you could say that Gauma dying would let him potentially meet that Princess again in the afterlife. That’s still a pretty sad thing though.

I’m kind of glad that Gauma was ready to start swinging at his former allies. Those people made their mission to effectively commit genocide. There is no casually walking up and saying “well we lost”. Do that and expect some punches. I feel bad that Gauma is likely to go out like this. But you never know. Yomogi strangely has the power to control kaiju. Maybe he can influence the one that revived the group or maybe his powers can be transferred to Gauma to save him. We’ll see though since right now he’s in no condition to fight. 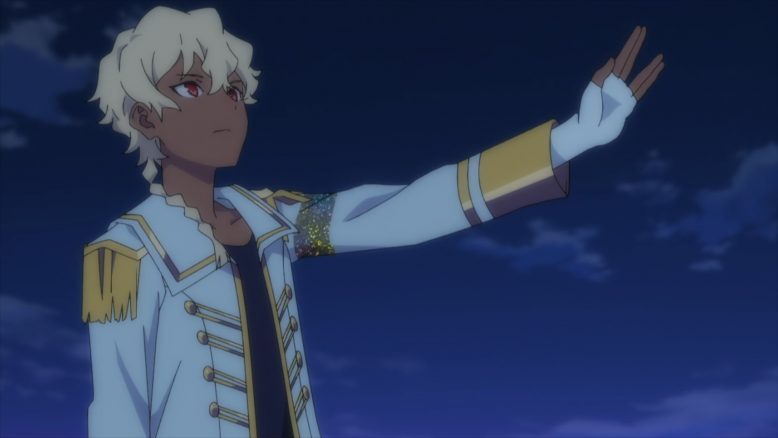 No shock that Sizumu is the last boss. He’s been the one basically running the show from the shadows and always acted like his connection with the kaiju are different. It somehow makes sense that he had one hiding within him that whole time. I guess he really was hanging around Yomogi and Yume since teen emotional drama was good energy. Yume’s character arc must have been a treat. He’s definitely tough, but it is hard to tell how much tougher than the previous kaiju he is. After all Knight is basically trying to fight as Kaiser Gridknight, but he can only do so much. Without the other characters to work with him he’s basically just carrying the extra pieces around. No doubt the whole team needs to come together if they are going to handle this. 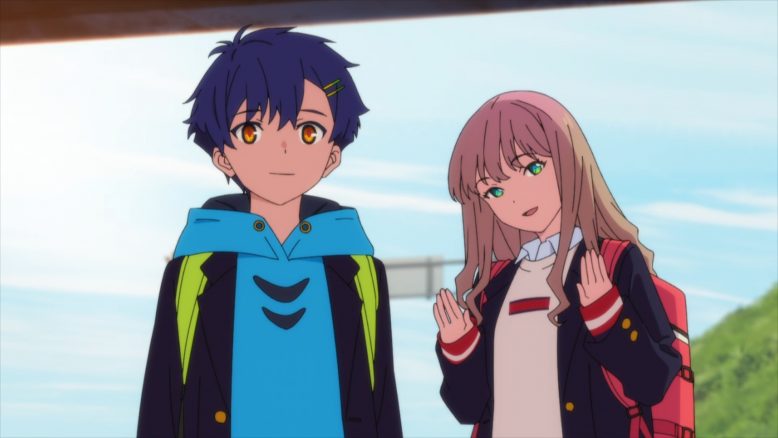 I can’t wait to see how the last episode plays out. This has been a really fun ride. They managed to mix together action and nice character journeys. I really cared what was going to happen with Yomogi, Yume, and the rest of the team. The good guys will win no doubt and save the day. But the aftermath and where the characters end up after all this will be what matters. That could very well connect to any future these characters have to the Gridman universe as a whole. But for now I’ll just try to be patient and look forward to the craziness that should hit next episode.