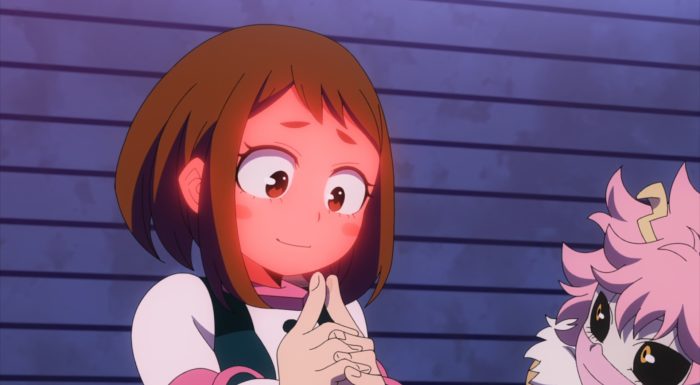 The last episode obviously was one that triggered plenty of strong responses from others. And that was honestly the same for me. Whether the choice to handle Deku’s development like this and introduce several more quirks was right or wrong is something I’m unsure about. My leaning would be towards it not being the right move. But it remains to be seen if the story can handle this effectively or not. Even if I don’t agree with the choice if it can at least remain an enjoyable viewing experience then I can live with that. Maybe part of the positive feeling I have after this episode is that this class showdown is finally over and done with. The story can actually move forward a bit now. 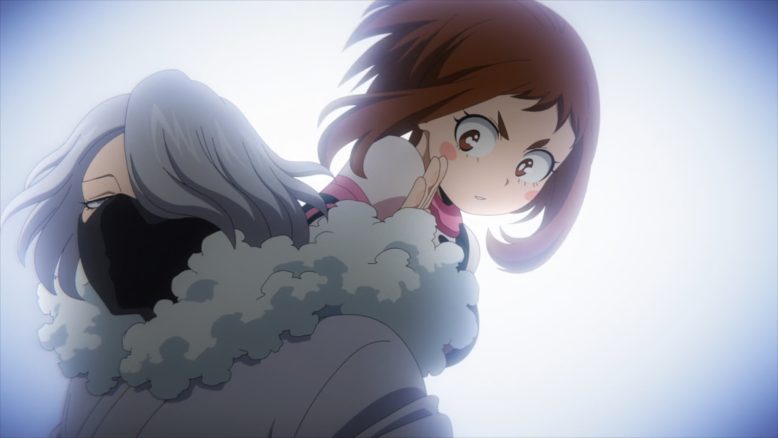 To start off I’ll just focus on what I did really enjoy in this one. This was easily one of Ochaco’s best moments in a long while. I could complain that her best moment is coming during this very weak arc, but it’s still better than nothing. She really did embrace more than just Deku last episode. This was a chance for her to follow through with her idea of being a hero. Ochaco threw herself into danger, gave out decisive orders, and resolved the situation. Yes, the target that needed saving is the guy she likes. But just liking someone isn’t enough to make a bold rescue effort like that. One still needs the courage to follow through with it.

She absolutely deserved the credit she got in this episode. That it also allowed for some very cute shipping scenes this episode is just a bonus. The nice thing is that Ochaco also showed rational thought and trust. It would have been easy to get swept up in Monoma’s ploy and rush off to help Deku instead of her other teammates. If she had done that then things might have really gotten out of hand. By putting faith in Deku she was able to support Mina and Mineta in order to win. 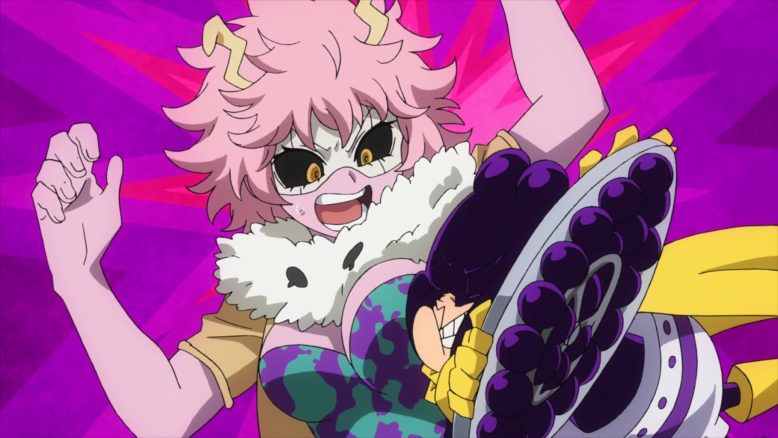 It was also nice to see Mina and Mineta doing a good job. I’ve been extremely tough on Mineta and frankly for good reason. That guy has serious issues and needs to clean up his act before he becomes a criminal himself. But credit should go where it is due. Mineta stepped up and worked well with Mina to keep a large number of Class B locked down. They didn’t outright win the match themselves, but they did allow their teammates to do their part. I’d still say that these matchups were mostly a waste, but at least it was fun seeing some of the combo moves possible between the various classmates. 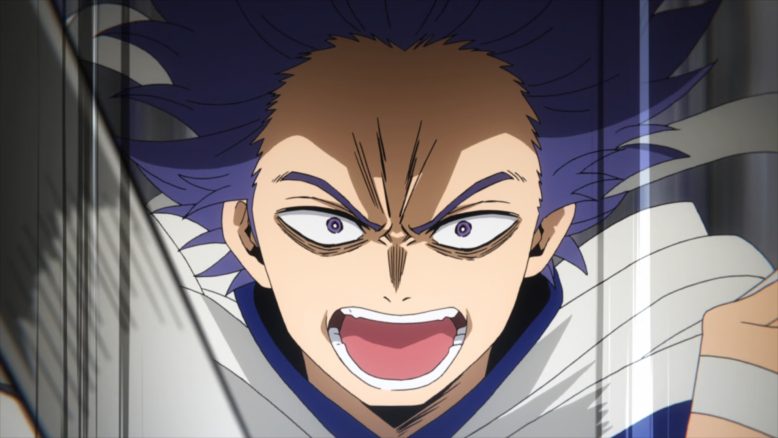 No shock either that Shinso passed. There wasn’t much chance he wouldn’t and he did just fine considering the handicap of having less time than the other students to handle his quirk in combat situations. Frankly I’d have thought he passed just based on the first match he was part of. His solid actions in the second part definitely should have locked him in for that. True enough that if he was on the same level as everyone right now then he would have to be a talent beyond measure. He’s good enough to pass and I’m sure he’ll end up in Class B where he can keep working on what he does well.

I’d say the mentorship situation between Shinso and Aizawa represents one of the better ones in the series. It’s a nice reminder anyways that characters don’t need to be carbon copies of each other in terms of abilities in order to be mentored. Shinso’s quirk isn’t erasure, but the impact and their weaknesses are similar. They both have a quirk that makes them a priority target in a fight and they are better off outside of the spotlight where they can strike unexpectedly. There’s no doubt that Shinso can become a solid hero with time and I’m glad he’ll have the chance to do so. He’s much better now than during the school festival where he was extremely petty and ignoring how better off than others he actually was. 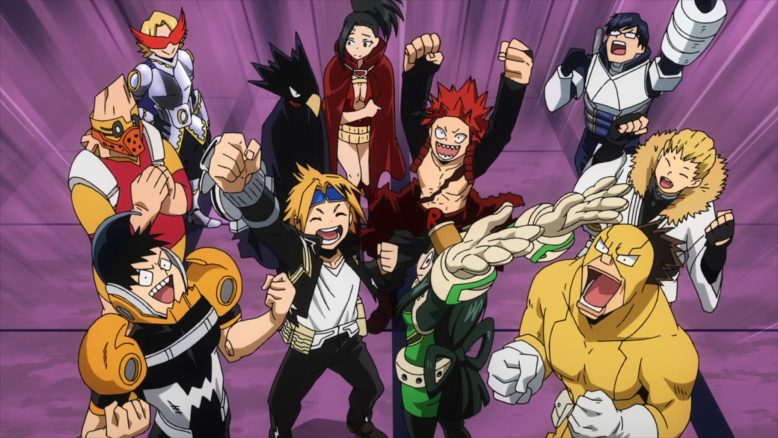 I’m kind of wondering if everyone is ok in the head with not reacting properly to Deku manifesting a completely new quirk. Yeah Kirishima I’d say that giant black bands of energy do look a bit different compared to pure speed and strength! Seriously!? No one is openly asking why Deku suddenly has a completely new quirk? I mean they are asking what happened, but the reality is really clear and obvious here. The story is walking into a situation where Deku is going to manifest several powerful new quirks and are going to have to answer some serious questions. And I’m not sure from this episode that the story is ready to do that. Yeah, you keep the secret of One For All being an inherited quirk alone. But at the same time you have to publically reveal Deku as this mini-All for One figure who has multiple quirks. 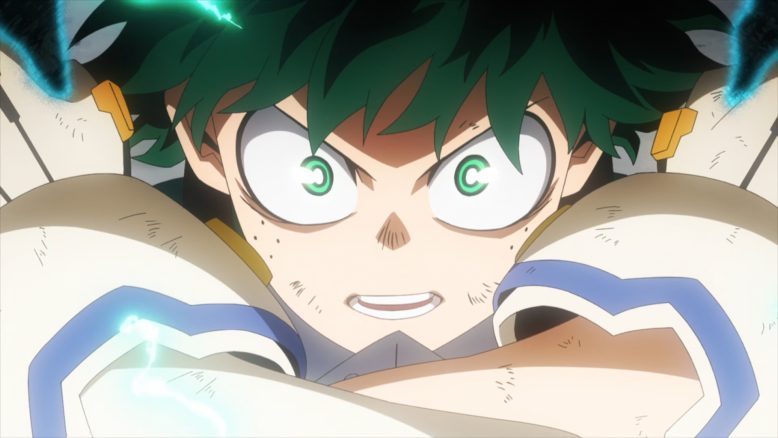 The best parts in this episode from Deku had nothing to do with a new quirk. It was about him returning to his origin and focusing on that. His hard work to get a handle on One for All and not pushing his body beyond what it can handle is how he can thrive. To win this match he didn’t need anything fancy beyond what he already had at the start of it. I still don’t love the direction the story went, but I’ll try to give it some time to prove itself. And I’m definitely glad this arc is over. As a whole it was pretty weak and you could have easily cut it back significantly or turned the major plot points into events in a better story arc without much issue. Hopefully the remainder of this fifth season will step things up a bit.