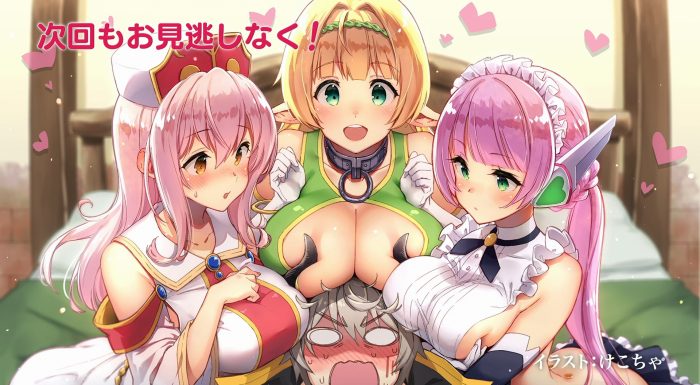 This was another strong episode that managed to balance some action with some over the top character moments. We even got to meet the maid from the OP and she was well worth waiting for. Plus the power of healing has never been more entertaining to watch. Hopefully no one else has that kind of reaction when being healed or that town is going to have one heck of a reputation by the time this show is over! 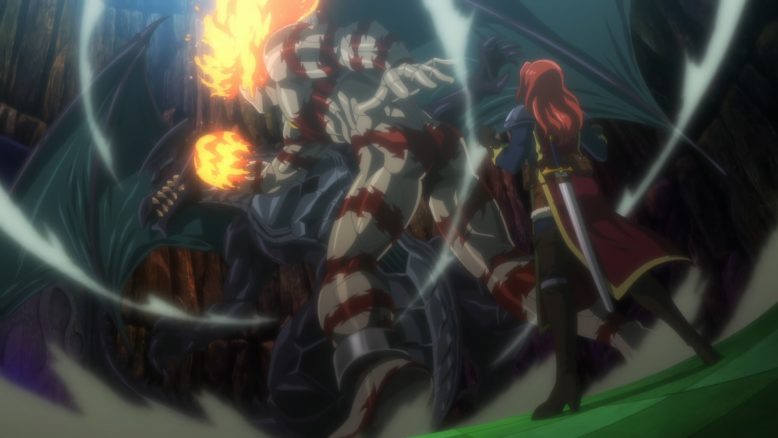 The whole bit with the dragon and Gewalt was actually pretty tense. Of course there was no doubt that Diablo would save them eventually, but the timing was certainly up for debate. It was pretty enjoyable watching Gewalt and his summons getting utterly overpowered by the dragon. He was a difficult opponent for Shera and Rem which is understandable. Even though Shera was powered up with that bow it simply gave her a good weapon. She still had to actually hit the guy to do anything and unfortunately he was too careful to let her take some shots. And Rem’s summons just aren’t going to match up against someone that has more powerful summons than she does. 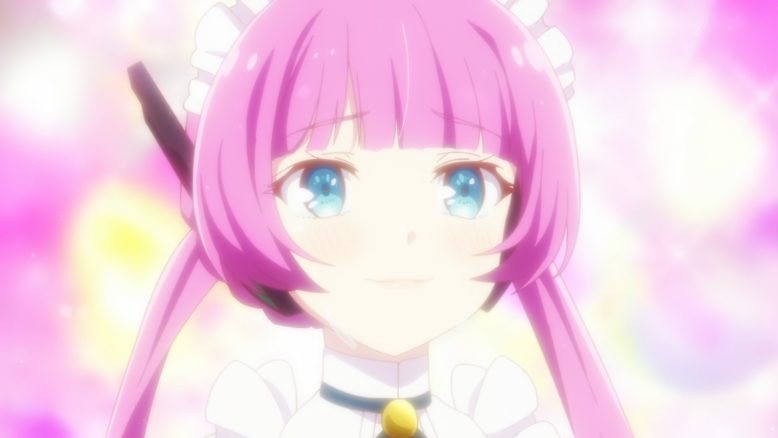 That dragon sure took some hits at the end though. He tanked quite a bit of damage that Ifrit was dishing out, but couldn’t handle Diablo. Of course if Diablo couldn’t beat his own dungeon’s guardians then he’d have an issue. I wouldn’t have been shocked at him being troubled since he lost his staff and had to…burn some incredibly rare items to warm up. That’s all the more painful since that gear literally saved his life. But that did allow him to swap out gear without issue. I’m curious about the skills packed into his new outfit. Considering his level he can bust out some crazy stuff. Maybe he’s got something that will give passive MP generation since running low after major fights has been a consistent issue for him.

Nothing Diablo did quite compared to the utter annihilation offered by Rose. That dragon (who has died a virgin) was stomped out of existence in a hurry. A good lesson not to upset the mecha maid who doesn’t appreciate being called a doll. No wonder she was the guardian on the level after the black dragon considering the firepower she’s got. If she joins up in this coming fight that will be a huge asset. I have the feeling she’ll return to the dungeon to secure Diablo’s possessions after this arc though. 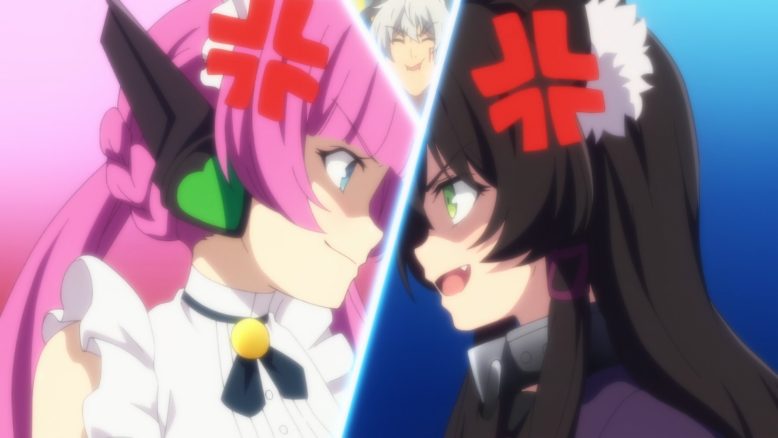 Rem not holding back against potential rivals

Things got a bit dicey there with the Rose vs Rem showdown. Mostly because I was worried about Rem. She’s plenty capable, but she doesn’t have the firepower to clash with someone like that. Thankfully Diablo wouldn’t let it go that far. Things really have the potential to get dangerous with such strong personalities interacting. Rose’s a rather protective individual although she won’t do more than sulk around Diablo. Her very existence just further confirms this as Diablo’s dungeon. Although since it is considered a newly discovered dungeon I think we can still guess that the dungeon was summoned to this world alongside Diablo himself. They just couldn’t summon a megastructure to that tower of summoning in episode 1. Makes you wonder what else might have been summoned at the time Diablo was taken to this place. 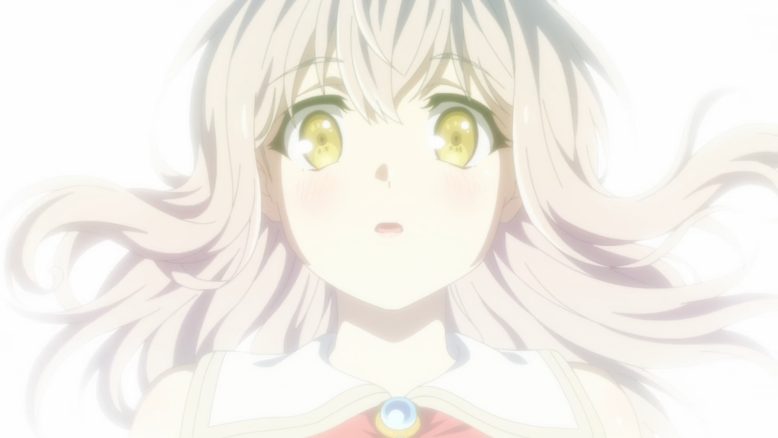 This episode wasn’t exactly lacking in the fanservice department near the end. Lumachina’s…purification was certainly eventful. Not sure I can say much more than that. Horn’s “reveal” as a girl was something that was easy to see coming. I’m sure in written form it is a lot easier to pull that kind of twist. Not that it can’t be done, but they just couldn’t pull it off here.

I was hoping that Rem would get a power- up during this arc and she certainly got it! I didn’t think she’d get a brand new outfit that was packed with buffs though. Certainly got her taste of some classic RPG armor design choices! It’s got plenty of defensive buffs, speed buffs, magic resistance, and even powers up her summons. It may have little fabric to work with, but it does have everything she needs to play a more prominent combat role. And considering the times Rem has nearly died in this series that is a positive thing. Shera got her offensive buff from Klem so just giving her better arrows is more than enough (along with that ring she grabbed for herself). Makes sense that Diablo’s vault wouldn’t have that much stuff available to lower level people. Rem is lucky she’s high enough level for some new gear. 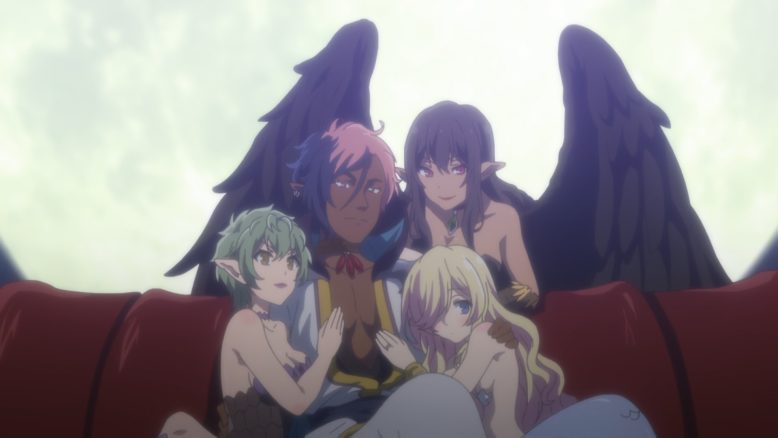 This guy is about to have a very bad day

All this going on and now the Demon Lord’s forces are on the move. There isn’t much time to waste even if the immediate issue of Lumachina’s curse has been taken care of. If they can wipe out that army then they can focus on healing all the people infected. At least they are set to potentially do that. Diablo has had a chance to raid his own treasury for any items he particularly would want to have. I’m expecting some of his gear to give him flight skills so he can fight more freely. The clash with the black dragon was enjoyable, but I’m expecting some crazy stuff next week.