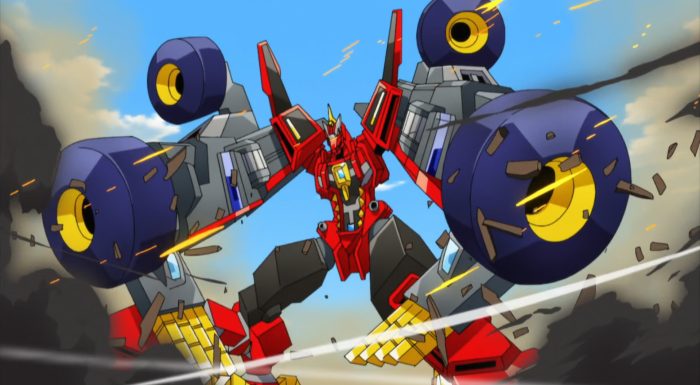 This episode continued to move things along and I’m curious to see how things are going to play out with Yume. She’s easily the most interesting character in the show in terms of her story and is plenty likable as an individual. That isn’t to say the rest of the cast are weak since I actually like this group overall more than I did the Gridman cast overall. It’s just that Yume has a lot going on and I’m really curious to see how this will turn out. They dropped (along with a hard cut) the rumor that Yume’s sister killed herself. I’m not entirely sold on that theory, but it is interesting to bring up. 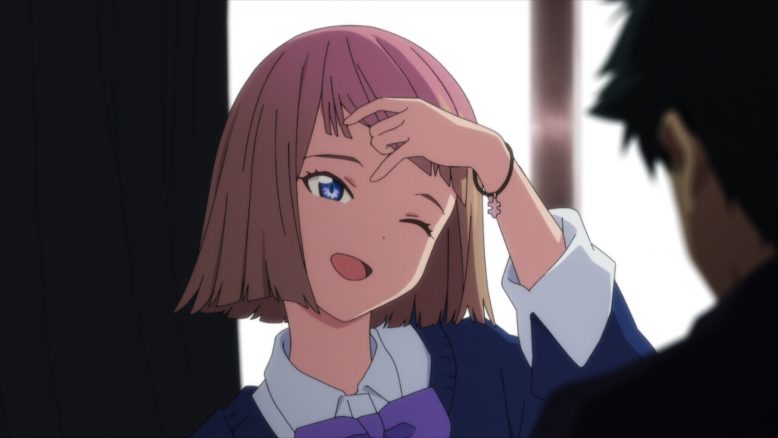 So what is the truth?

Honestly I do wonder what the payoff will be for Yume’s sister. Did she kill herself or was it an accident? I suppose murder is also on the table even if it hasn’t been brought up yet. Beyond that though is her sister someone special? I do agree with the idea that she might be the reincarnation of the person Gauma is looking for which would be rather tragic. Steadily though she is finding people that knew her sister and is gaining more information.

Makes me wonder what was going on with her life though. She was laughing it up during those videos, but was anything different at home? I don’t have a great grip on Yume’s parents. One of their children died and that would mess anyone up. Not cleaning out her room isn’t that unusual either. But were they supportive parents or really hard on her? Not sure since they did only appear in that one scene in the first episode. Honestly suicide doesn’t feel legitimate to me, but maybe there was a reason that such a rumor was going around. At the very least she seemed to want Yume to see her performance and it seems odd too suggest that when she was thinking suicide. But we are talking suicide and that is a complicated topic. 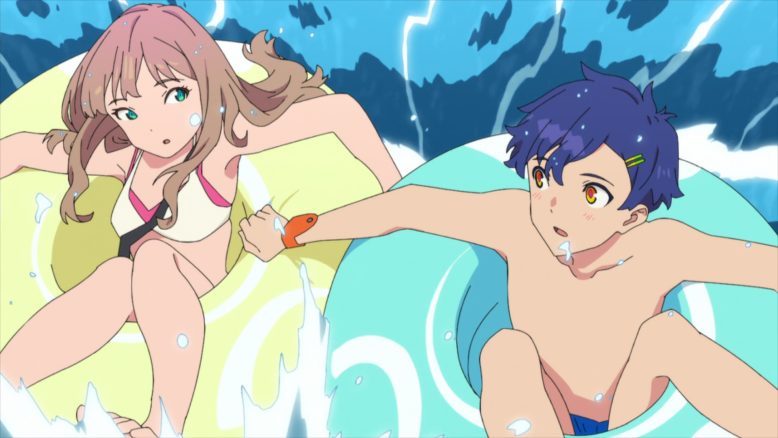 The ship is doing fine

On a lighter note, I did enjoy seeing Yomogi continue to make progress with Yume. Is he able to ask her out on dates yet? Not really. He also struggled at times with the fake dating thing and that’s no surprise. When he did get lost in the moment both he and Yume were having fun. It’s fair to say they had a good mood going there until Yume’s trauma came to the surface. I’m looking forward to seeing how things continue to develop there and think they’ll reach a decent point by the end of the show. The montage music definitely helped sell how they are making nice progress and getting closer. Sizumu being there was actually kind of helpful to spur things along.

Points to Yomogi later in the episode for helping save Yume from the kaiju. Others helped, but he got specifically thanked which I’d say shows how things are moving in a nice direction. Maybe I’m reading too much into things (definitely possible) but Yume had a look on her face when Chise was revealed to be riding with Yomogi. But it was a pretty cool expression so maybe she was just looking in that direction to follow the conversation. At the very least she did have a good look on her face after being saved so I’d say Yomogi has a good shot here. 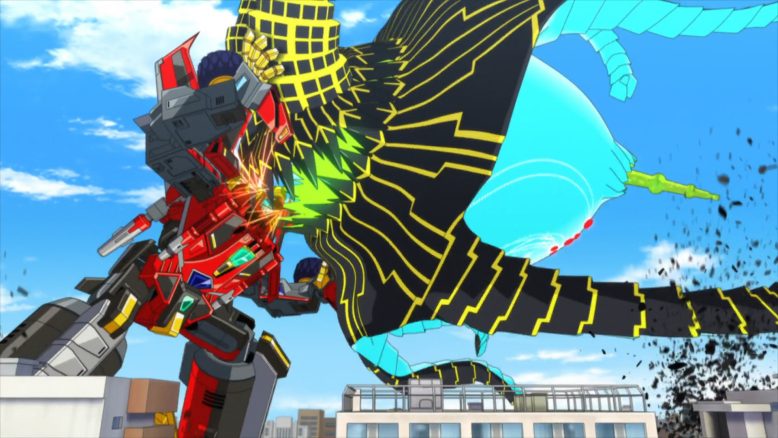 This one was a bit creepy

The fight itself was actually pretty ok. The kaiju was a tricky one, but that goes for many of the kaiju they’ve fought. The enemies aren’t necessarily getting stronger as much as the kaiju users are trying to find weaknesses in Dynazenon to exploit. In this case targeting Yume so they couldn’t combine. Simuzu was a clever adversary, but I wouldn’t say his kaiju was overwhelming just based on abilities. Although it was definitely creepy in a lot of ways.

This really made me wonder about the kaiju in general. Kaiju have a preference which is interesting. Emotions being their favorite is quite a statement. What are the goals of the kaiju themselves? They don’t straight up rampage until they are being controlled by others. Although they do cause potentially damaging effects via their particular abilities. Honestly the Kaiju Eugenicists are strange in and of itself. They control monsters to cause devastation but also are cool with enjoying the fruits of civilization. They’ll go to school or hang out at the pool one moment and then unleash a kaiju the next. Simuzu will chat up Yomogi and Yume at the pool and then he’ll fire a melting beam towards Yume’s mech. I don’t get these guys. 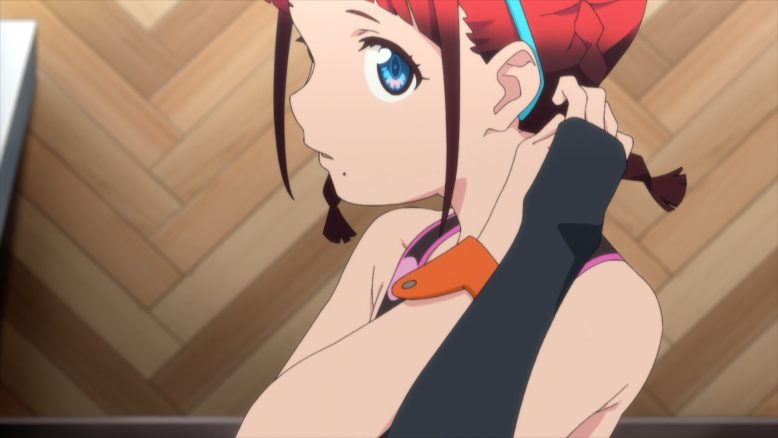 There was a lot of interesting little moments in this episode. Koyomi’s date with his old…classmate was interesting. Is she still married or is she just unhappy in it? What happened between them in the past and does it relate to Koyomi’s current lifestyle? Heck, there was that brief look from Yume at Chise’s covered arm that makes me wonder what is up with Chise. It doesn’t feel like a fashion style to keep an arm covered up even at the pool. Is she hurting herself or does she have an injury she’s trying to hide? Her not going to school has been mentioned but not delved into yet. There are a lot of interesting plot threads that are bound to be explored sooner or later. 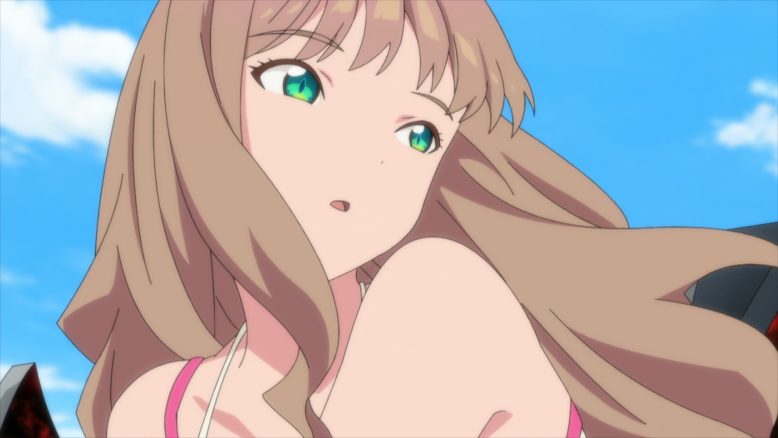 I’d say this was another good episode. Maybe not one of my favorites, but I did actually enjoy the little pool date portion and the new Dyna Soldier combination. I can’t wait to see how things will play out with the mystery surrounding Yume’s sister. Right now we aren’t set for an emotional confrontation between the main cast and the Kaiju Eugenicists. The two sides (outside of a couple guys) aren’t really that angry at each other. But we’re bound to reach a breaking point on that front.