Loving Horimiya as an Anime Only Watcher 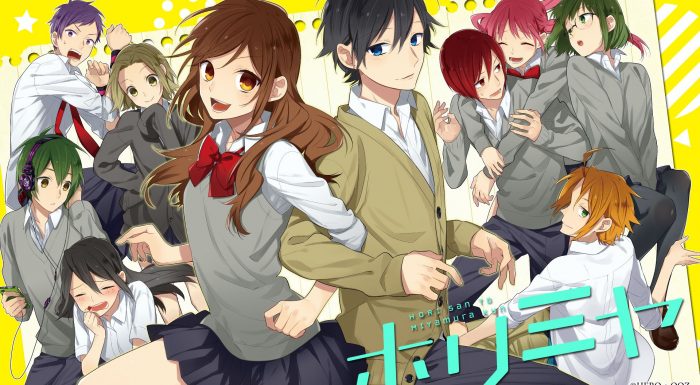 So, as the Winter 2020 Anime season (one of the strongest seasons we’ve had in a while) draws to a close, I’m left wondering and musing about a few things. Winter 2020 was not an easy time for me personally, as I made a huge move during a Pandemic, got insanely busy and am still trying to pickup the pieces. I covered two series, one of which has a few posts that are going to be exceedingly late (to the point where I’d say they’re too late), but beyond those, there’s always a show or two that I end up missing out on covering and wish I could.

To that end, Horimiya, a 1-cour High School rom-com that both debuted and finished up this season, was actually not one of those series. Its not that Horimiya isn’t fantastic, because it really really is. Rather its the fact that Horimiya is just not the kind of show that I can see myself covering and analyzing on a weekly basis. To me, the show was and is something different, something relaxing and refreshing that I watched in bursts whenever I found the time. Horimiya was a show I personally needed, and enjoyed, and that’s just something that’s both so special and so rare, that I really do want to talk about it. 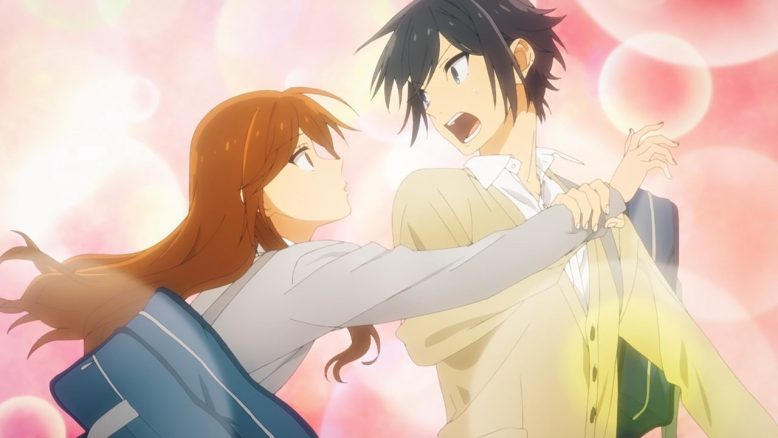 Now, before I begin, I do want to state that I actually have a few different reasons for wanting to talk about Horimiya, beyond just suggesting that people watch this show. The thing about Horimiya that’s been frankly a bit tough to swallow, is the discourse surrounding the show now that its done. Despite the immense amount of hype and excitement, a lot of people have been largely disappointed by what I’d say was and is a great show.

The usual suspects apply here; some people got bored of the show midway, and of course, the manga fans cried foul at how the adaptation “ruined” the story. Its a sentiment that I’ve seen and even felt one more than one occasion. More often than not, Unless you get a complete 1-1 adaptation of your favorite manga/game/novel story, you end up feeling cheated from the story that you wanted to see come to life on that there silver screen.

And yes, I’m no stranger to complaining about things that are poorly adapted (just have a read on my coverage of BlazBlue, Persona 5, Ace Attorney e.t.c). It sucks when a story you love, a story that’s primed for being animated and doing exceedingly well in that form, gets the short end of the stick. 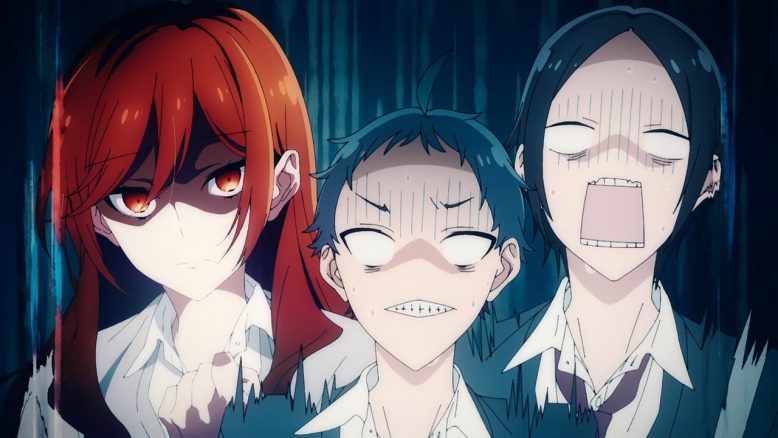 Its sad, tragic even, but here’s the thing; I don’t think Horimiya got the short end of the stick here. Now, I should preface that I have not read the manga (though I am sure that will change soon), so my opinions here are as an anime only watcher. But its because of where I come from, as an anime only watcher that experienced Horimiya as a property for the first time ever, that I think my thoughts have something useful to add to the discussion.

Let me just give it to you straight: Horimiya is a fantastic show, and every decision that was made, made the show what it is, which was an actual joy to behold. I’m going to keep the spoilers to a minimum here, but some larger ideas can’t be skipped over, so there’s your warning… Leave now, or forever be spoiled!

So then… What exactly is the issue that a lot of people have with Horimiya, that I don’t? An issue that most manga fans have for sure, with even some anime-only watchers? Well… Its the idea that Horimiya ended up spreading itself too thin, focusing on too many side characters and not focusing on the issues and relationship of the main couple (Hori and Miyamura). 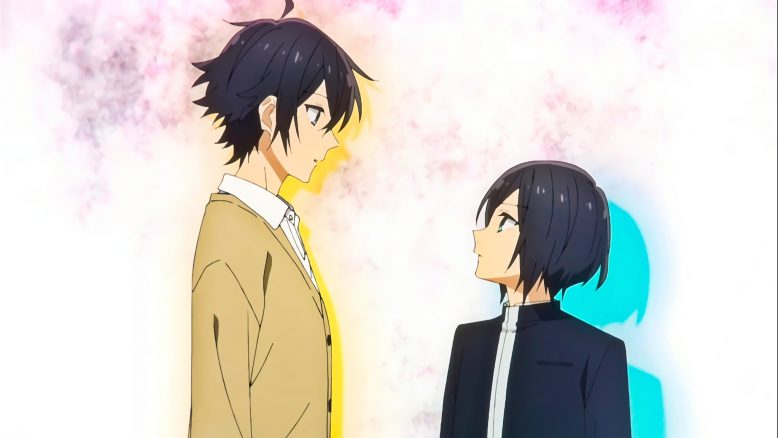 Look, I get that for fans of the story, this stings. I’m sure in the manga, there’s this big deep, contemplative look at these two and how they mesh as a couple. I get that, but I will say that every time the show focused on these kids and their “worries” or “issues” I found myself engaging less and less with the show.

So when I hear that the source material dove deep into Miyamura’s psyche and his personal issues, or how Hori’s family life was put into focus, then I immediately breath a sigh of relief. That sounds drab, annoying and honestly not what I think is this story and show’s strength; the characters and how drama-free their lives seem to be.

If there’s a fantasy where people just kind of chill, and everything works out and everyone is ultimately super nice to one another, then damn does that feel super appealing to experience in the middle of a pandemic (which is when this show aired). Seeing kids in high school just kind of live their lives, interact with one another, fall in love, joke around and enjoy each other’s company is the heart and soul of the “anime” version of Horimiya. 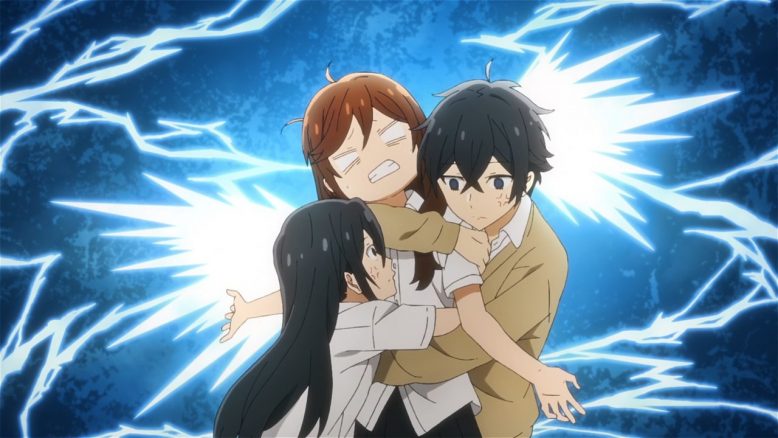 And man, would I not have it any other way. Seeing how natural and effortlessly Hori and Miyamura settle into.a relationship, and how they continue to glide through it with one another? That’s nice man. Its a breath of fresh air in a genre where there’s honestly too many stories that focus on drama, angst and high schooler depression.

Are the bad parts of life necessary to telling a realistic story? Sure. Do I personally want to always see stories that paint a realistic picture of life? Hell no. Sometimes we need a show that just picks us up, makes us smile and makes us adore every character. To that end, I’d argue that Horimiya doesn’t just succeed, it hits it out of the park.

And one of the things that I think any great slice of life story has to do, is make the entire cast of characters important. Its something that we rarely see in these kinds of stories, where the main couple seems to get all the attention, and the side characters end up feeling like background decorations more so than actual real characters that impact the story. 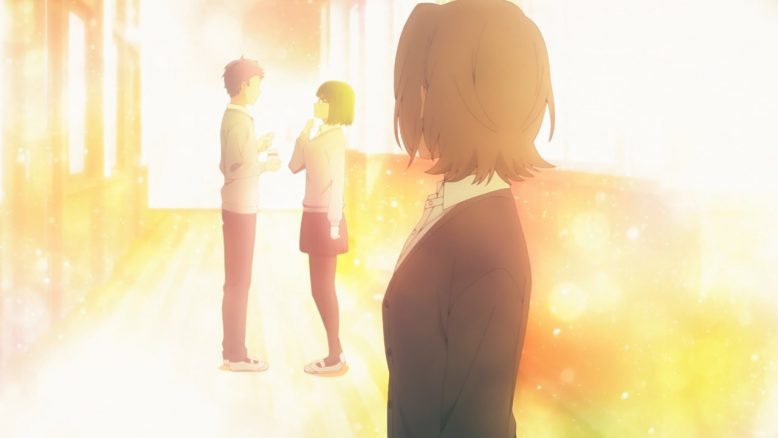 Which incidentally, is what a lot of people dislike about Horimiya the anime, the fact that it focuses on so many of the classmates and friends of the main couple, and therefore, less so on them. To me, that’s what honestly made this show stand out, as there was some serious development to a ton of other characters in this world, which made it feel more life like and real.

Taking a break from one set of characters, to then focus on another, was really really nice. Seeing each character get their “moment” in the series was fun, as was learning about how different and nuanced they were. A character would seem kind of stereotypical at first, only to be properly fleshed out and developed later. Its something that’s really hard to do, and the fact that Horimiya was able to do it in 13 episodes, speaks to just how impressive and skillfull the production staff and director were.

The show that I’m reminded of the most when I watch Horimiya is none other than Gin no Saji (Silver Spoon). A show that had a main couple, but wasn’t afraid to stray away from them and highlight the other characters in the cast. And honestly, we really don’t get enough shows like Horimiya or Gin no Saji, so it was nice to see another show at least try and fill that huge void. 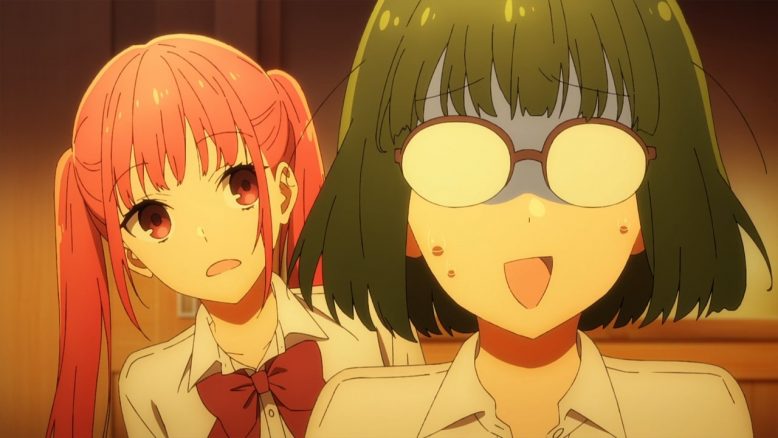 Now, as to whether the manga was the kind of story we saw in the anime or not, I can’t really say. A part of me honestly doesn’t care though. The manga can be its own thing, and the anime can be its own thing. I sometimes think that if you’re too close to a particular piece of source material, then you’re almost prepping yourself for disappointment.

A lot of people go into a manga adaptation, expecting to get a sense of how they felt when they first read the original source material. That can happen, and boy is it awesome when it does, but as someone who finds himself reading manga less and less these days, I think its honestly a shame.

Its a shame that people are calling this show, which for all intents and purposes just killed it in terms of visuals, character moments, voice performances and music (that Opening theme!). 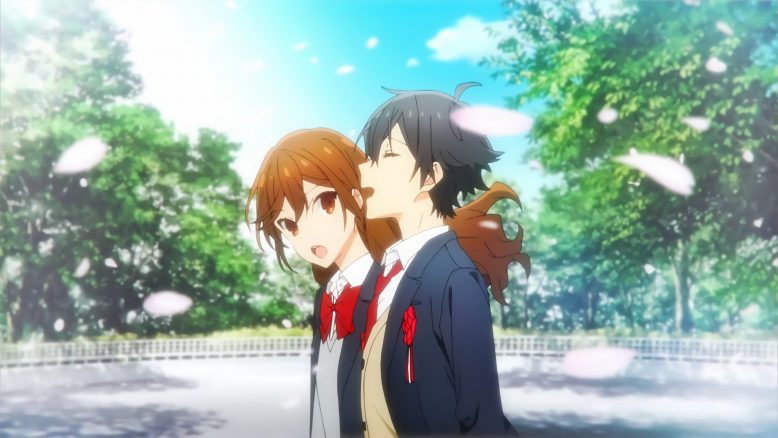 So I guess that’s what I wanted to state here. If you’re someone who loves relaxing slice of life shows that have a nice dose of heartfelt emotion, but don’t drop into the deep end of drama, then I think you should watch Horimiya. Ignore the disappointed manga fans (they have their manga), and ignore the drama lovers (who I usually associate myself with).

Horimiya is a good, wholesome story about kids living their lives in high school. Its a show that’s got a lot of heart, and a clear love of the source material that shines through. Different people will obviously be drawn to different elements within a story, but man, do I just vibe with the aspects of the story that the anime production staff chose to focus on here.

And you know, maybe, just maybe, fans of the original source material can just respect that an anime adaptation isn’t always made for them (or us?), but rather to get a much larger audience to appreciate a property that we love. In the end, Horimiya definitely managed that, and so I’m thankful that this show was made, in the way it was made. We need more shows like this.