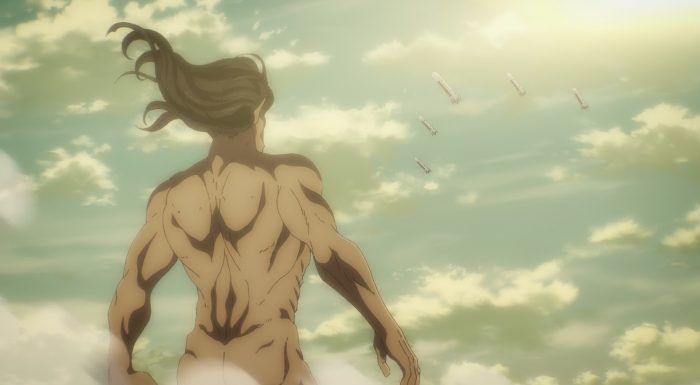 Well… That was a bit of a letdown, wasn’t it? After sixteen episodes of Shingeki no Kyojin’s Final Season, under new studio MAPPA and a new production staff, I think its safe to say; this final season is just not going to be good. In an age where stuff like Demon Slayer, Jujitsu Kaisen, Black Clover and a ton of other properties are killing it by investing in their franchises with both stellar animation, movie offshoots and properly spaced seasons, Shingeki no Kyojin is doing… Whatever the hell this was.

Sixteen episodes that had the content of maybe 4-5 episodes. At the end of these sixteen episodes, little has changed, and little new has been learned. Marley and Eldia are still facing off, the war is literally about to happen as the season ends. We know of Zeke’s plan now, and we know that literally everyone is trying to double and triple cross each other. We still have no idea what side of the conflict Eren is on, where he stands, and we have no idea who the hero or villain of this story really is.

These sixteen episodes have certainly been building to something, but its something that we were setup to go into as far back as episode 5-6, which is Reiner vs Eren, and their respective forces. The fact that we spent the entire season on useless squabbling, flashbacks and nearly nothing of note, and got worse off characters because of all of that, well it makes this entire season a complete waste of time.

And I honestly, don’t get what the reason was here. I mean, we know after today’s announcement that Shingeki no Kyojin’s Final Season is getting a part 2, and that its almost a year away (coming Winter 2022, which is January of next year). Why spend 16 episodes on all this stuff? Why not just have fans wait, and deliver a solid, full run through of the entire story. That was what was promised before, after all.

When Shingeki F was in its marketing phase, the whole idea was that the Final Season was going to run until the story finished. Yet, its clear that something went very wrong, and that we’re now stuck waiting a year, in a rather awkward part of the story, have been basically jerked around for the majority of a longer than usual cour. I’m assuming either the production staff behind this season fell horribly behind, or they were just given too aggressive of a deadline to get this stuff out. The result is a badly animated, cheap looking season that blew its load waay too early.

I mean, we haven’t seen a solid well animated fight, or any big action scene since Eren’s little invasion of Marley. Since then, the show has more or less been a series of conversations, and even potentially awesome battles like Levi decimating his entire transformed Squad of titans, happened off screen. Its been a bit of a mess, and between the direction the story has been going towards and what I’ve seen here, I’m actually regretting covering this series.

I won’t lie, I felt like a poser covering this show given that I never covered the first three (superior) seasons. Jumping in now, just because I was hyped, was perhaps a mistake, because there were just too many things working against this show. I think its because of how botched this was going to be, that I think even Studio WIT made a hard pass.

In the end, I guess this entire season was a bit of a waste. I think either a summary or a super cut of episodes 7-16 will probably serve anyone well enough, and then the next part may very well bring.. Something? I’m not sure what a year break is going to do, but I don’t believe the show is actually going to be done throughout that year. If anything, MAPPA probably has other stuff its slated to do, and thus I think we’ll be back to where we were, a year later.

I will say this, if you enjoyed this season, then I don’t think you’re wrong. There were parts here and there that I did too, but those were few and far between in these 16 episodes. More so than anything else, this is friggin Shingeki no Kyojin, a franchise that’s delivered rivetting storytelling and action for three seasons straight. To see it fall so far, as the story comes to a close? Well, that’s yet another tragedy that came out of last year (as if there weren’t enough of those).

Will I continue to watch Shingeki no Kyojin? Yeah, sure. As I said in an earlier post, the production comittee was well aware of the fact that fans are in at this point. We’ll see the story through, because we’ve invested enough time as it is. As to whether I’ll continue to write about this final season, well… Who knows? A year is a long time, and who knows where we’ll be at that point. I suppose we’ll just have to wait and see until then, won’t we?