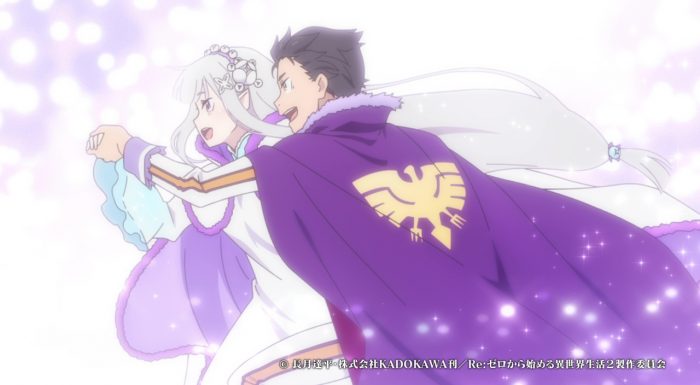 The focus this week, was most definitely on the epilogue to the latest story arc and less so on anything else. That’s not to say that the scene where Subaru, Beatrice and Emilia all worked together to take down the Great Rabbit was not extremely badass, but it definitely felt a bit on the shorter side. For an enemy that has more or less been a hanging threat on this story for the majority of the season, it felt a tad bit anticlimactic to see this part of the story resolved so quickly. 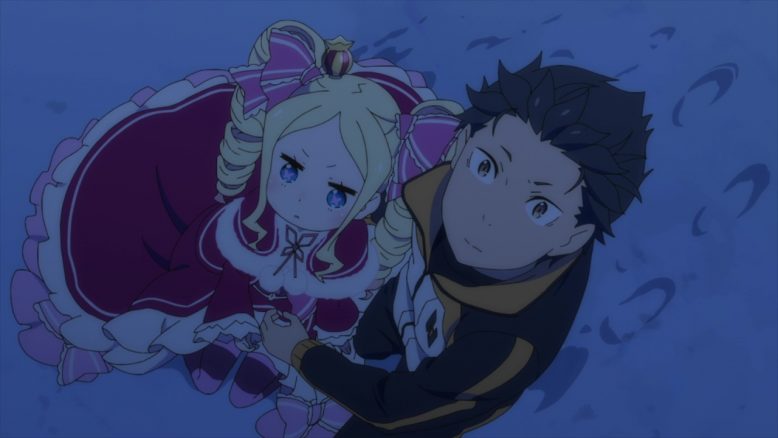 Beatrice is a weapon of mass destruction….

That said, while I enjoyed Beatrice using Subaru’s Al Shamac to deal the finishing blow and Subaru finally using another form of magic, it was the character moments that really stole the show this week. The decision to focus on giving these characters a well deserved moment of happiness was I think a solid one, even if it personally wasn’t enough for me.

I will say, however, that one part that did satisfy me was in seeing literally everyone punch and their dog Roswaal in the face. And on the subject of Roswaal, I have to say that I agree withith Garfiel and his sentiments. Roswaal actually got off pretty darn easy, all things considered. 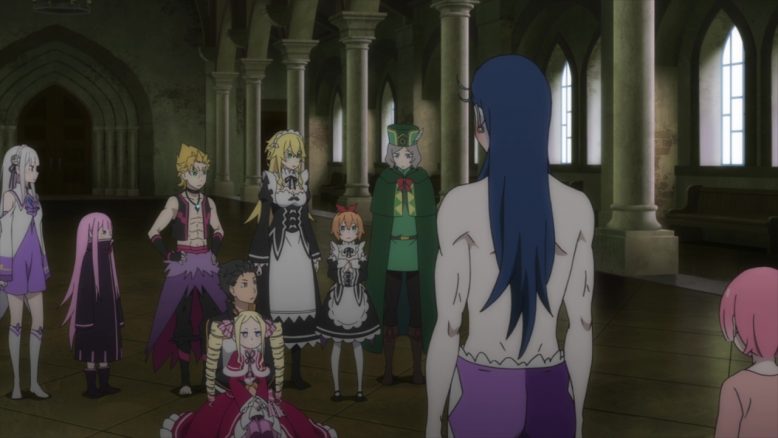 Roswaal thinking he can get out of this by stripping…

The added little tidbit of Roswaal basically using his children as vessels for his own ends was messed up, and that combined with all the other atrocities he’s committed in this season, well, there just isn’t any redeeming this guy (in my eyes). Subaru may want to make use of him, and even Emilia may believe in second chances, but man… As an audience member, its hard to really like or be for Roswaal’s sudden change to team Emilia.

As for Emilia and Subaru? Well… Their relationship has clearly evolved to the next level here. There’s a pretty obvious romance happening here, alongside Subaru’s promotion to becoming Emilia’s official Knight. I like it, it makes sense, and its been developed enough at this point where I find it a lot more natural than the stuff we got at the beginning of this second cour. 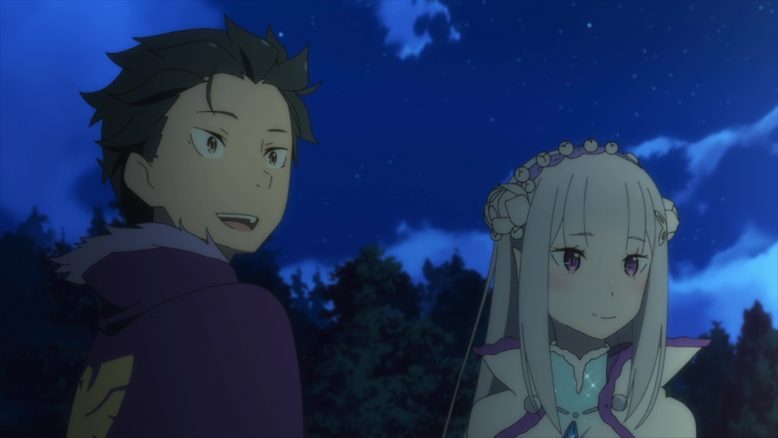 I suppose its as Subaru said, its not the beginning or the middle that matters, its the end. By the end of all of this, Subaru x Emilia is a relationship and dynamic that works, even if it was a bit rough to get there.

Now then, before I close out this rather short little post, I do want to comment on the one thing that disappointed me a bit. I really was expecting that we’d get at least some hints to the larger story as a whole. To me, its seems obvious that a season 3 of Re:Zero will get made, eventually. The Light novel and Anime are at peak popularity, and with the amount of investment by both Studio Fox and the Production committee (nearly every episode was almost 30 mins), its hard to see them stopping at this point. 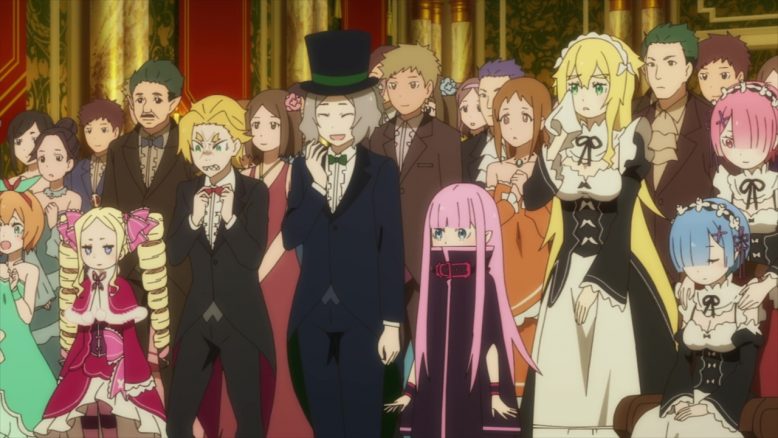 The gang’s all here!

That said, I do wonder why we got an almost “series finale” like ending, much like how we did at the end of season 1. There’s no setup for what comes next, there’s no teasing, or any firm announcement of a third season. There’s enough setup in this season, where I do wonder why that is.

Every scene with Pandora and the Witch Cult, the fact that Rem is still unconscious, Echidna’s whole deal, everything is ripe for some sort of hint as to what’s to come. Not getting any of that, or even touching upon those things, made this final episode feel a bit incomplete to me. 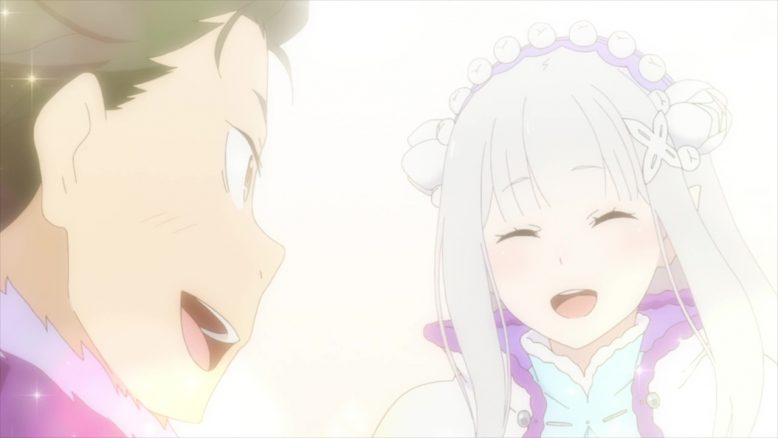 See you all next time?

Having said all of that, however, I suppose I will say that overall, I liked this ending. It resolved everything relevant to the current arc, it put the characters in a nice place, and gave us a cute bunch of scenes with everyone happy and partying at the end. Re:Zero 2 is a much stronger franchise post this season, and I just hope that we don’t have another 4 year gap before we get a season 3. I really enjoyed watch this show week by week, despite my rather tumultuous schedule this past two months.

Spring 2021 was an absolute blast (as an anime fan), and a big part of what kept me going through a rather tough time personally, was the weekly episode of Re:Zero that I got watch, talk about and enjoy with all of you. See you all when there’s a third season, eventually!