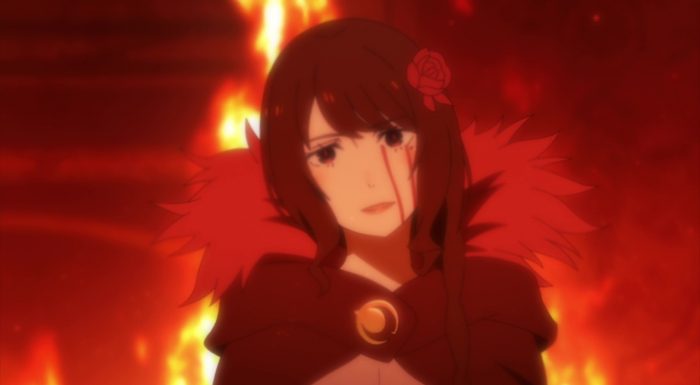 Well then… This episode more than made up for last week’s offering, and did so with style. There was so much forward momentum here, and such smart use of time that I couldn’t help but love it all. This week’s episode of Re:Zero 2 was not only good, it was everything it needed to be. We’re now 2 weeks away from this show ending, and it seems like we may very well get everything in this arc resolved, if just barely.

There were huge gains made in the whole mansion storyline this week, which honestly, needed to happen a week ago. What’s most interesting to me, however, is how this episode clearly did what I wanted the last episode to. It focused more on Subaru’s side of the story, and brisked through Emilia conquering her third and final trial.

The brevity didn’t hurt Emilia’s story either, it made it stronger. The fact that Emilia was able to use both Ram and Subaru to push herself forward was great, and the potential future visions threw a bunch of interesting tidbits that may come into play later. Garfiel wanting to kill Subaru, Emilia massacring everyone at the mansion, A note from Pandora about who she wanted to kill, and a ton of other things that I’m sure give hints to what will happen in the future. It was a nice bunch of teases for what may come next. Most important of all, this whole trial segment, thankfully, didn’t over stay its welcome (unlike last week). 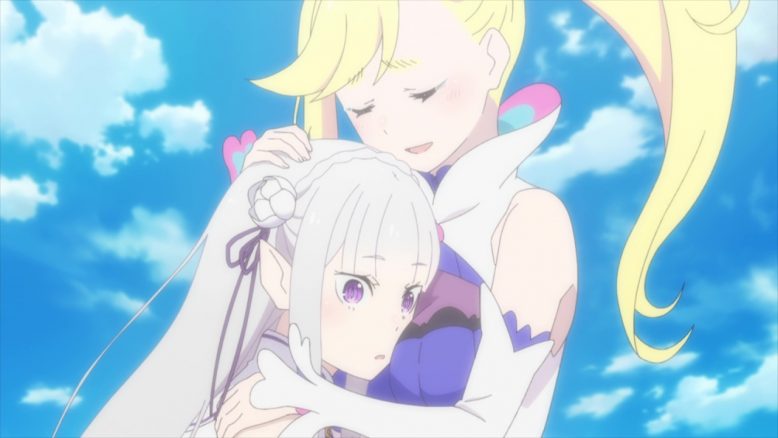 Now, the third trial was fine and all, but what came next was truly surprising. The big twist here, was in learning that Emilia’s mother was none other than Minerva. The whole “Emilia is Satella” theory of mine is gaining a lot of credibility now I think, but we’ll just have to wait and see where this all leads (in a potential third season?). Even more interesting, of course, was the fact that Echidna never even showed herself in this final trial. Whatever emotional damage Echidna received last week, well, she’s outright scared of facing Emilia now.

Speaking of Echidna, I suppose we really should address her first and foremost. After Emilia clears the final trial, it becomes clear that Echidna wasn’t all that bad of a person, despite what the show and its characters had led us to believe. Echidna didn’t just sacrifice Ryuze to erect the barrier, she did so at the cost to her own life as well, as it was her coffin and her corpse that served as the foundation for the spell that encases the sanctuary. Echidna and her whole story is turning out to be a real tragedy, as we learn more and more about it.

Of course, when we talk about tragedies, we have to talk about Ram and Roswaal.  Man, did that not end the way I expected it to. I had assumed that Ram would succeed in holding Roswaal back, but between the sight that Emilia sees upon leaving the ruins (The blizzard is in full swing) and the scene at the end, well… Ram may have very well died in this arc. 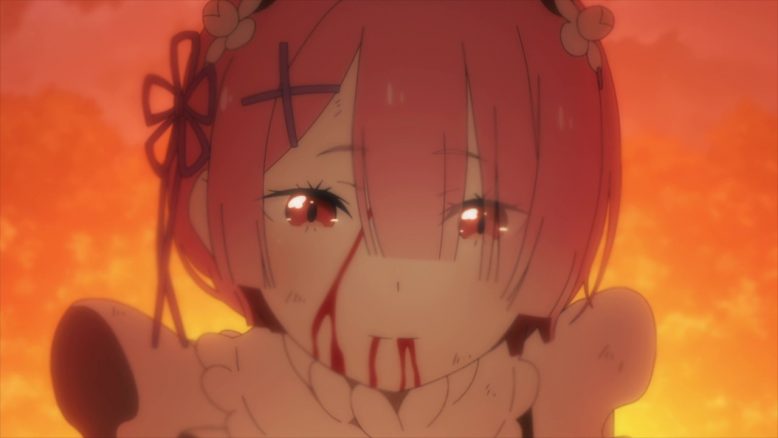 Ram didn’t fail, but she wasn’t able to survive her mission either. And Roswaal? Well, he’s getting to the point where redemption is becoming more and more of a hard sell. Ram, despite what Roswaal did to her village, still wanted nothing more than to save the man she loved. Roswaal’s response? Well, he just annihilated her at the end when she was finally able to burn that damn book of his. There’s some other tidbits as well that are thrown in, like Roswaal having modified the contract between Puck and Emilia, and potentially even having weakened the great spirit.

What this all means for both Roswaal and potentially Subaru and Emilia, I’m not sure. Things seem pretty dire at this point, and even if Subaru succeeds and is able to bring back Beatrice and the rest, the Sanctuary may very well be gone by the time he gets back. Does that mean we get another reset and the last two episodes are focused on resolving everything?

I sure hope not. If nothing else, the resolution to all the stuff at the mansion was quite spectacular. The battle between Garfiel and Elsa was just so… visceral. Brutal, beautiful, jaw dropping and ultimately horrifying. I’m not entirely sure why Elsa decided to throw in her back story in the middle of the battle, but it did add something to her character before Garfiel finished her off. 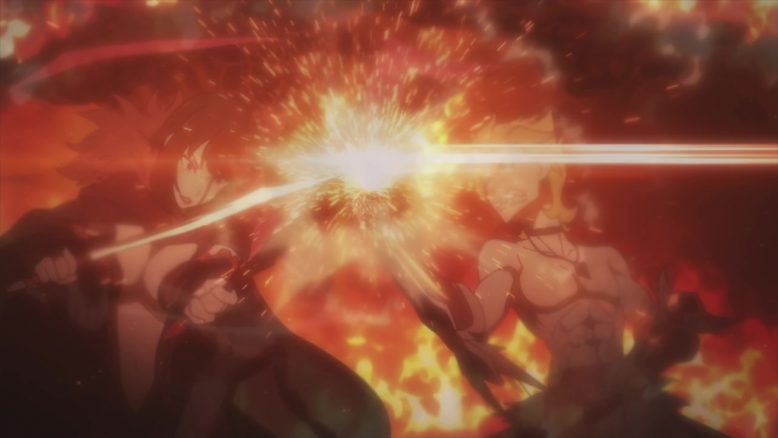 And Garfiel? Man, that guy can really fight. Subaru is DARN lucky to have that guy on his side and if this week’s episode shows anything, its that Garfiel is a really dependable ally. I will say that the whole vampire thing was a bit lost on me with regards to Elsa, but I did get the gist of it at the end. Since Elsa is a vampire, once she ingested Garfiel’s blood, I assume her regenerative powers got poisoned because of it? Either that or Garfiel actually weakened her enough when he bit into her?

As for Elsa’s backstory, it was probably unnecessary and definitely felt kind of forced here. I get the need to add some depth to her, but I think she worked pretty darn fine as a mysterious femme fatal type character. While her backstory works, its honestly nothing all too special.

In any case, the battle ends with Garfiel finally ending Elsa, once and for all. Even Subaru and co make some real progress, taking down a magic beast while basically setting fire to the entire mansion. At this point, Betty will either go with Subaru, or die, and I’m curious to see their conversation from last week, continue. 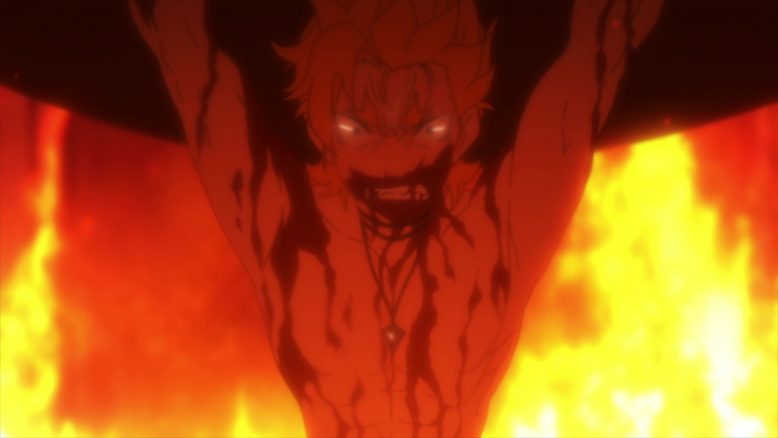 All in all, the stage is more or less set for the last two episodes. The situation at the Sanctuary is more or less done, even if the results for our protagonist’s side are a bit mixed. Roswaal did end up casting the Blizzard spell, but Emilia also passed all her trials. Elsa and Maylie are more or less dealt with, so the only thing left is for Subaru to win over Beatrice. Two episodes, kept at the usual 30 minutes or so should I get us over the finish line, I think.

Overall, I’d say that this second half of Re:Zero has been a tad bit weaker than the first. How this impacts the overall story, however, will ultimately depend on whether the show can stick the landing at the end. Can we get this arc properly resolved and setup a potential third season, all in the span of two episodes? That’s the big question, and one that I suppose we’ll know the answer to soon enough. Two more weeks, two more episodes.