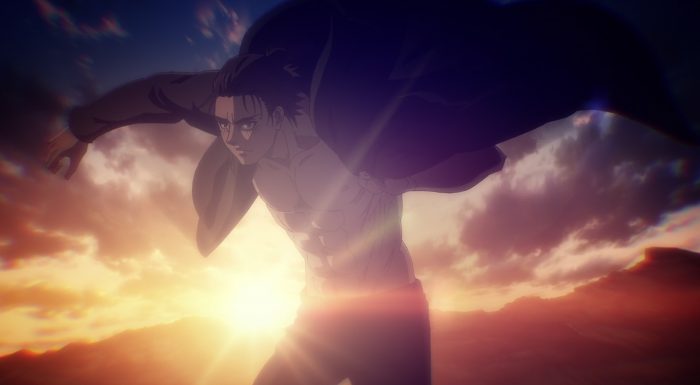 In this 4D chess match that symbolizes the conflict between Paradisio and Marley, the distinction between the identity of the players and the pawns is starting to become a bit clearer now. As I mentioned in one of my episode posts on this final season, Shingeki no Kyojin has become a very different show in its final arc. The bombastic action and animation set piece moments have been pushed to the side, and the political intrigue and general politics of the world have taken center stage.

Is that a good thing? Well, I’m never quite sure, if I’m being entirely honest. Some weeks it works better than most, and its no stretch to say that this week was one of the strongest we’ve seen from this final season thus far with regards to plot development and the whole political intrigue focus. While I still think that a lot of this is fluff and really could’ve been condensed, I will say that I am at least enjoying the exercise of trying to make sense of it all.

As far as I can tell, there are two main players right now, and those are Zeke and Eren. They seem to be driving everyone around them into a frenzy, both on their own sides and vice versa. What I find most fascinating, however, is that I can’t tell who is on what side. Its clear that Eren wants to save Eldia and all of his friends, but the way he’s behaving, well… Its easy to doubt his intentions. Zeke and his motivations, on the other hand, are the true mystery. 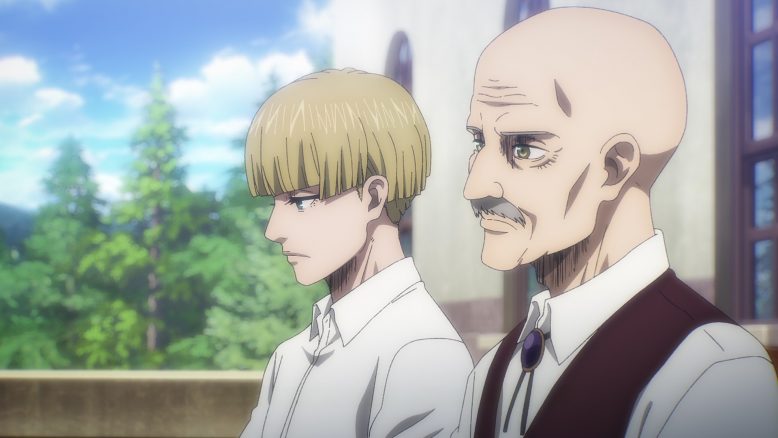 For how important Zeke is to everything, we never see him in this episode…

If we look back at what we know about the character from season 3, then we know that his entire backstory came from hating the Anti-Marley resistance. At the end of that very season, he also vowed to come back and “save” Eren from their father’s manipulations. So… Is that what Zeke’s endgame is here? I mean, in this very episode we find out in one scene, that Marley (with its transporting Titan) has infiltrated Paradisio already as well. Is Zeke’s whole betrayal really a double agent play on the Paradisio side?

I definitely feel like that is what’s going on here. Zeke’s hate of Eldia and their father, combined with what we know about both his life span and how Marley’s government works, leads me to believe that this his “all in” gamble to finish of Paradisio. Using the insurrectionists he hates so much to fuel his plan and ultimately destroy Paradisio would make a lot of sense. At the same time though, going as far as to arm and develop Paradisio seems like a step too far, and wouldn’t exactly help in this plan, would it?

Its confusing to be sure, but my guess is that Zeke does want to see Paradisio burn, and that is indeed his endgame (as convoluted as his approach may seem). If that’s true, then all the turmoil that’s going through Paradisio is all according to his plan. And lets be honest, despite how bad Eren appears to be, at least the guy is acting and trying to do something. 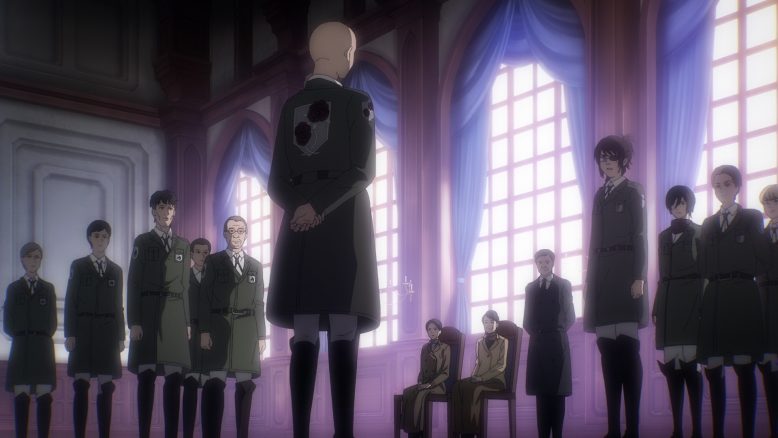 A room of buffoons…

If there’s one thing that’s become abundantly clear in both this episode and the last few, its that the Paradisio folk are clearly horribly inept at the whole international relations thing. Characters like Zachary “the Premiere”, Hange, even Armin and Mikasa, feel like they’re waaay out of their depth. The naive way in which these people try to deal with the situation at hand is well… Sad. It reeks of ignorance and ineptitude.

Eren, for all his faults (and don’t get me wrong, there are many of those), is at least a little bit better versed in the way the world works. He’s got the knowledge of History (and potentially the future?) that the Founding Titan affords him for one. For two, he’s also traveled outside of Paradisio, and seen at the very least Marley, if nothing else. That knowledge, and perspective, is at least giving Eren the drive to act and move forward.

Both Eren and to a lesser extent Yelena are pretty much on the money about how slow Paradisio is to react. They spend all their time squabbling and arguing with each other and are even stupid enough to do it in front of foreign dignitaries. The whole scene with the Military debating what to do after Zachary’s death, in FRONT of the people from Hizuru was insane to behold. Prixas was the one saving grace here, at least having enough of a brain cell to tell them all to shut up in front of their “guests”. 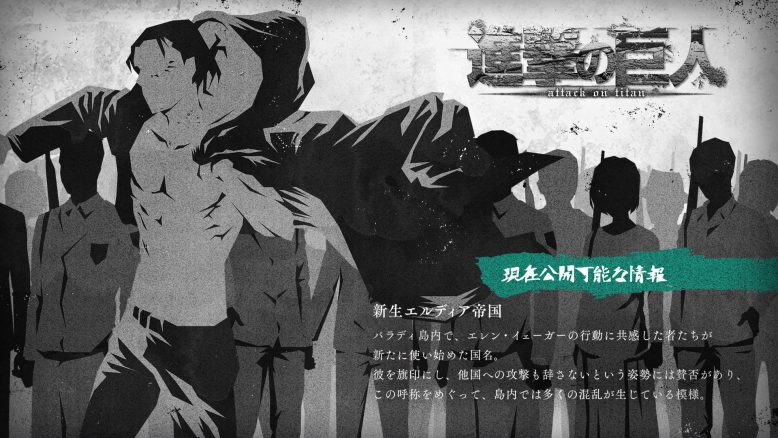 Now, as to Prixas, I will say this, his whole plan to bend to Eren seems kind of suspect too. Prixas deciding to give into Eren’s demands is certainly practical, but it also seems a bit odd for a character that just spent a bunch of time grilling Yelena and doubting her. Again, I’m not sure which side he’s on, but I wouldn’t be surprised if he both agrees with Eren and has been working with him.

Then of course, since I mentioned her, there’s Yelena. Yelena’s story is definitely starting to come undone, especially when her comrade lets it slip that she’s been rather “harsh” to Eldians in her own country. That, combined with her adoration of Zeke, leads me to believe that she and Zeke may very well be pulling a secret mission for the Marley military, giving the pretext and grounds to act.

So, that, is honestly where things stand. The Paradisio Military has lost the support of the people, Eren is now not only acting on his own, but has his own cult of military men and common folk that are at his beck and call. Eren wants to see Zeke, the Paradisio military wants to prevent that from happening unless they can control it all, and of course, there’s still Gabi and Falco hanging around, while Marley slowly infiltrates the island amongst all the chaos. 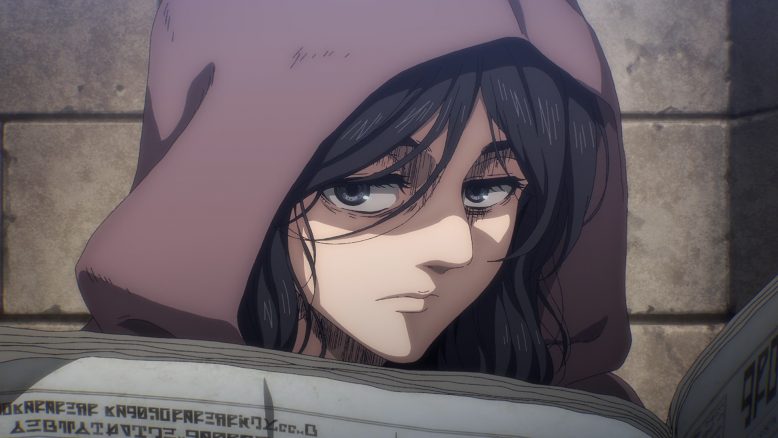 Marley knows how to sneak sneak too!

It seems like next week will begin with a resolution to the whole Falco/Gabi story, which had me audibly groan when I saw that in the preview. The fact that I liked this episode, and the fact that Gabi and Falco were mostly absent from it, is no coincidence. But, as of next week we’ll be 13 episodes in, marking the end of at least one cour of this final season. Like I said last week, this ultimately means that we’ve had about an entire cour’s worth of build up at this point.

There’s no reasonable way for Shingeki no Kyojin to finish off all the plot threads its setup in 4 more episodes, so I think we may at the very least, be hitting two full cours for this Final Season, if not more. This is going to be a slow burn of a story, it seems like, but where it all leads and how soon is going to be key. That said, more episodes like this would be great to see, if nothing else, though next week may be another rough one.