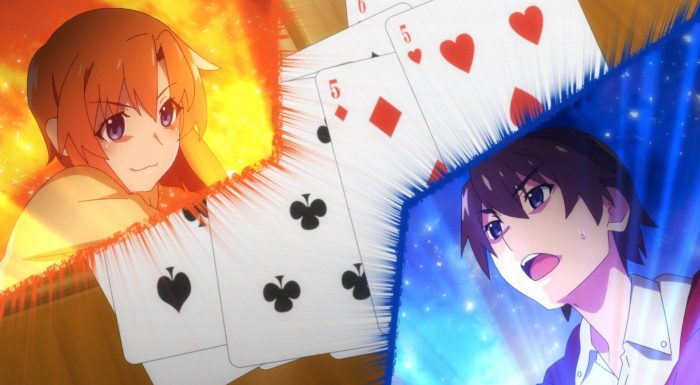 Honestly, I’m not sure where we’re going to go with this. Is there enough time to really capture Satoko going on the path of a disturbed murderer and resolving that in the remaining episodes? She’s only now meeting whatever entity likely gave her the ability to loop. She hasn’t even really reached what I would consider a breaking point yet. Yeah, her school life isn’t great. But beyond that she doesn’t look about to kill anyone. Is being told by this person/deity that she needs to keep Rika in Hinamizawa enough to send her on a murder spree and dragging her friends into madness for it? That would require Satoko being a far worse human being than she appears to be right now. 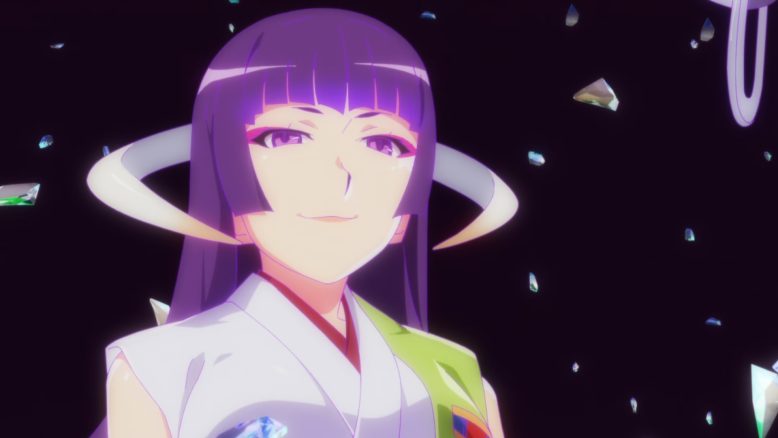 In that case I’m not sure we have enough episodes here. The next episode will have to take time with setting up Satoko’s fall and maybe sending her on her journey through time and space. That only leaves a few episodes to really get to it. Unless Satoko is just going to be stopped by conversation once we get through these flashbacks I almost expect another season to be confirmed. Twelve more episodes might be almost overkill to face off against Satoko, but I’d feel more confident with that than I would with trying to resolve things in 2-3 episodes. 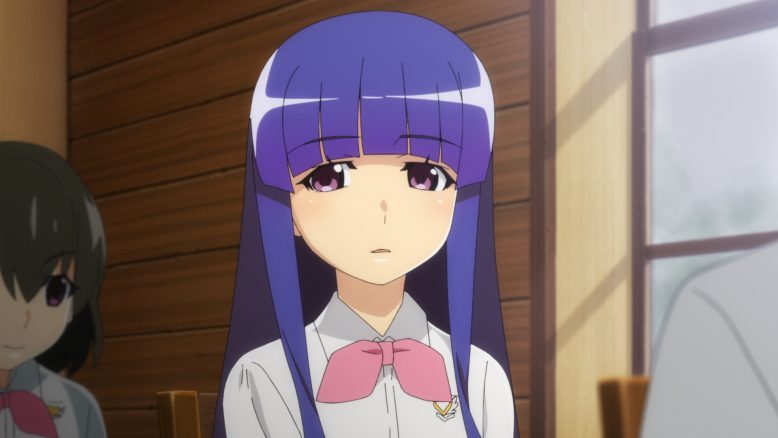 I’m honestly struggling a bit with empathizing with Satoko too much. My feelings when watching the episode could be described with exclaiming “just leave the school!” Yes, when she was locked up in the school prison (what the heck) then she couldn’t really do that. But she eventually got out, months passed, and her second her was starting up when this episode picked up. I get that she’s really attached to Rika and her past has left her extremely dependent. But her biggest issue is just not being able to accept change and moving past that. She’s locked into the belief that she has to be with Rika and things have to be the way they were before. It’s just painful seeing her continue to treat Rika’s differences as a phase.

Not going to say Rika is perfect. She shouldn’t have invited Satoko without making sure she understood what she was getting into. Now honestly even that’s not really her responsibility. She’s not Satoko’s mother or guardian. But, it would have been a good idea. Could she have done even more than she has? Maybe. But she’s tried to talk to Satoko, tried to invite her into groups, and tried to defend her from those that look at her poorly. And yet that faith is absolutely not being rewarded. She may not fully understand Satoko, but she believes in her and is trying. 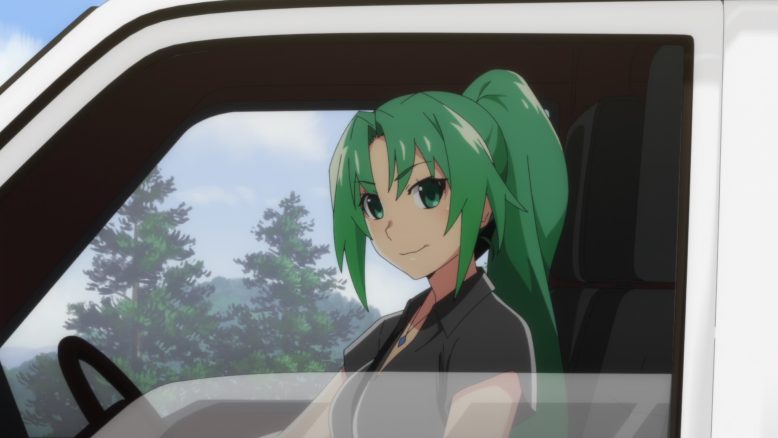 It was nice seeing the characters together again. Also made it clear that Rika can handle herself in either location just fine. She wasn’t struggling in the club games either. Though it is clear that Satoko is just more suited to this sort of setting. Although she couldn’t go to high school there since they just don’t have that facility. She’d still have to go out of town (like where Mion went) and would have had to adapt to that school’s rules and atmosphere. But she would have been better off there. But beyond that side of things, I just enjoyed seeing the characters have fun. Even Keiichi and Rena were doing fine. They had changed the club to suit themselves and their new members, but they could still play the way that Mion ran things. People can add new elements to themselves while not losing who they are. 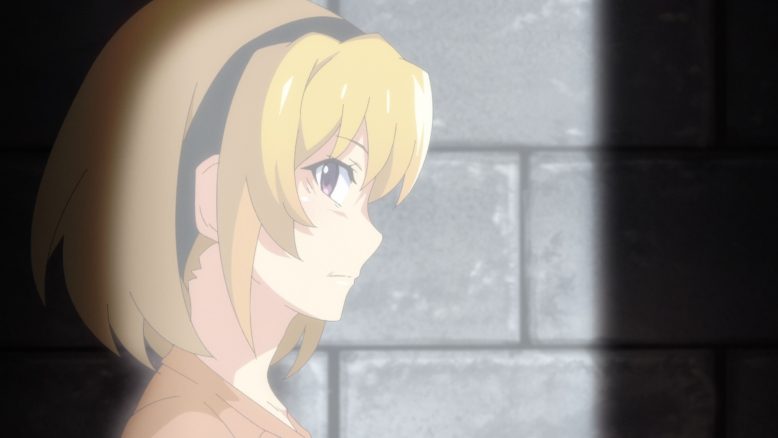 And now Satoko has met…someone. This isn’t Hanyuu that Rika was talking to earlier in the series. I will say I question Satoko’s sensibility to touch a creepy horn that was visibly creating shockwaves in the air. Pretty sure if I saw something like that I’d run the other way. But if she did then we wouldn’t have a show. But this person is likely to give Satoko the power to loop. Now part of me is curious. If she’s already in this space then maybe she doesn’t even need to kill Rika to kick start her looping craziness. But she doesn’t seem to be that crazy yet so I think she’s still got to go through more of an arc before calling on this being to help her.

I also just want to say I do feel for Satoko being thrown into a school jail. That’s got to be all kinds of illegal even in the 1980s. Although I didn’t feel as bad for her as I probably should have. She did something wrong, got someone hurt, and instead of feeling bad for that…she was just feeling bad for herself. Satoko has been through a lot. So I’m not going to demonize her here. But I just wish she would realize her options instead of just staying in a miserable situation that she doesn’t have to stay in. 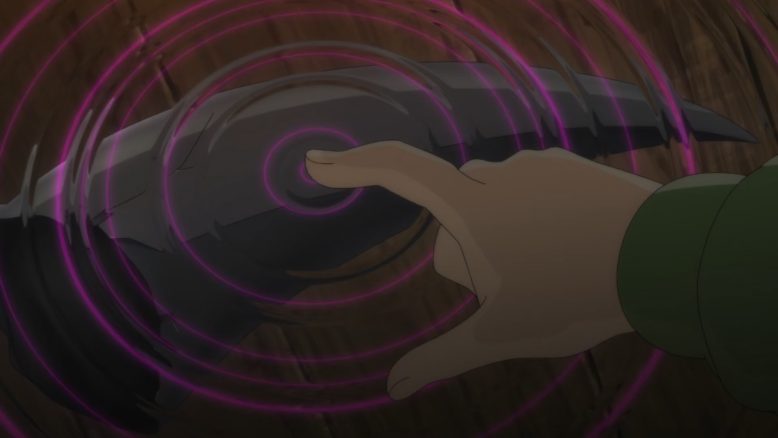 So here we are. I’m a bit worried about whether they are going to rush a conclusion or drop a sequel on us. I can’t see it being anything besides one of those two things. But for now, let’s see how the next episode goes. Satoko is just going to go over the edge eventually. She hasn’t gotten there yet. At the moment she’s just being rather stubborn and making bad decisions. Heck, she’s not even being bullied at this school. Even the girl who told the teacher wasn’t malicious about it. Her friend was hurt by someone that has refused to even try and get along. Yeah…she would say something. So right now Satoko doesn’t seem primed to do anything crazy. But if this new character says the right things maybe she’ll get there.