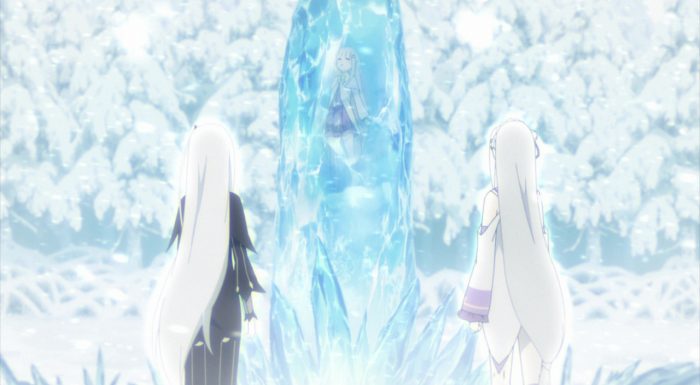 So that’s what the Opening credits look like! If you had told me that an anime series, a sequel no less, would have waited until its sixth episode to debut its opening credits sequence, after a series of longer than the norm episodes at that, well then… I would’ve actually looked forward to 2021. Despite whatever reservations and issues I have with Re:Zero 2’s whole Emilia backstory arc, I still do appreciate this series, and love it immensely. That said, its still true that this latest arc is more of a miss than a hit.

A lot of that comes down to a lack of both focus and pacing. The focus, in my humble opinion, is misplaced. Instead of focusing on child Emilia’s emotional state, I think this backstory needed to focus on why Emilia as an entity matters so much to the larger world of Re:Zero. And make no mistake, despite whatever uneven storytelling marred this retelling of her past, Emilia is important. She’s so important, in fact, that she not only connects every single antagonizing force to our current band of heroes, but also seems to have a literal key to the end of the world.

To me, the aspects of how Emilia fits into the world building of Re:Zero are just so much more interesting than her loss of Geuse, Fortuna and the villagers that she lived with as a child. Emotional stories like that are EXCEEDINGLY hard to nail, and I’ve only seen mega titans in the Anime Industry like One Piece, really nail it over the course of a dozen or so episodes.  Getting us to care about Emilia and her relationship to Fortuna and Guese, in the span of two episodes, was near impossible. The gamble, therefore, of focusing on Emilia’s emotional connection to Fortuna just doesn’t pay off here, unfortunate as it may be. Maybe it works better in the Light Novel, but here, I think we could’ve used a more abbreviated version if nothing else. 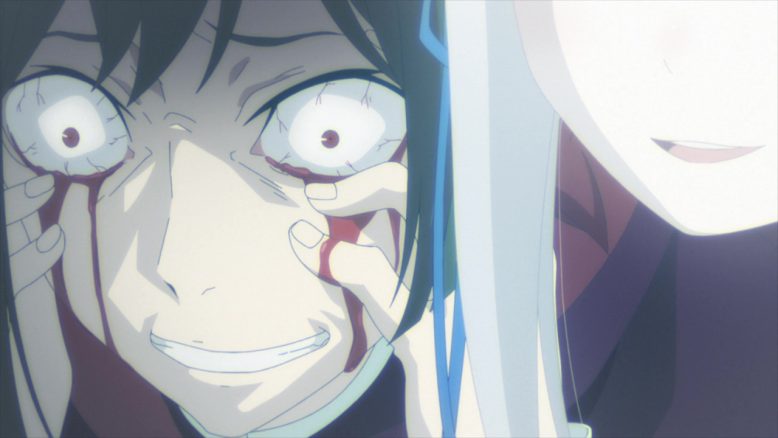 Even things like Guese’s transformation from akwardly lovable father figure, to flat out psychopath are too darn quick. I get that the idea here is that Pandora corrupts Guese and uses his inherent weakness to do so, but its just so… Standard. From a show like Re:Zero where things have often been given such a level of depth and mystery, this explanation kind of ruins some of Guese’s menace and exchanges it for a tragedy that’s rushed through and thus a bit ham-fisted. A much stronger version, I think, would’ve had us just see Guese as the lovable dude, and then cut immediately to whole scene where he he ends up unintentionally killing Fortuna. No explanation given, and an air of mystery left in tact.

And Fortuna? Well, I never could see her as anything other than a weirder version of adult Emilia. Its clear that a lot of personality traits that Emilia has, comes from her surrogate mother. That’s all fine and dandy, even if I do find the use of “Sugooooku” (loosely translated as Really Really Really) to be particular annoying. The issue I have is that we never learn much about why Fortuna does what she does. Why is she focused on Emilia? What was her promise to her brother Who exactly are Emilia’s real parents?

Plus, if that weren’t enough, there are a ton of unanswered questions about Emilia herself. Why does she have the key to the seal? What is the seal exactly? Why does Pandora want it opened? How would it end the world? These are the sorts of questions that need answers, because they provide the stakes for the stuff that ultimately happens in this very episode. It makes stuff like Emilia’s ultimate choice to keep her promise to her mother, for instance, a lot more meaningful if we know what exactly the seal is. 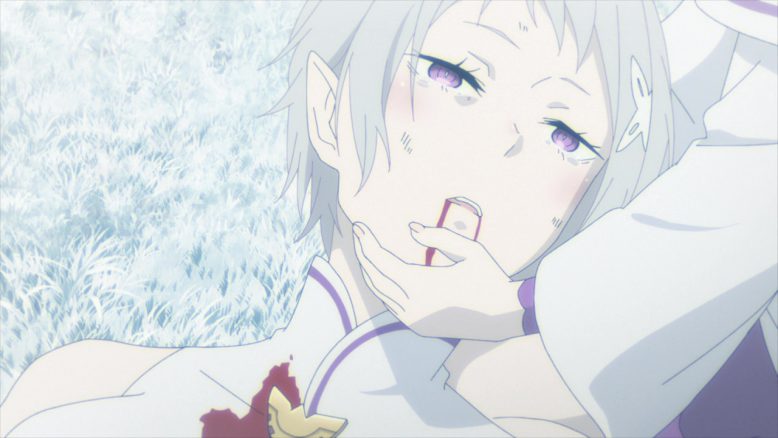 “What was my purpose in the story again…?”

But instead of all of that, we get to see Fortuna die a tortured death, and we see child Emilia’s character make a complete 180. She goes from being a normal, crying kid, to this brave child that ends up not only facing an impossible choice, but ends up making the right call. A normal child would, after all, give in to Pandora’s manipulations and just try to save her mother.

So yes, instead of liking all of that, there were little nuggets here and there, that appealed a lot more to me. I loved the fact that we ended up seeing the full range of Emilia’s powers, and how the kid went entirely berserk on Pandora. I loved the larger setup for a full out war between Pandora and Emilia, with the fate of the entire world hanging in the balance.

There was setup for the inevitable slaying of another of the great beasts, the Great serpent. And of course, we also have Emilia becoming a much more nuanced character, and wanting to save her childhood village, through the courage she got with her interactions with Subaru. Clumsy it may have been, I do like where we ended up after everything was said and done. 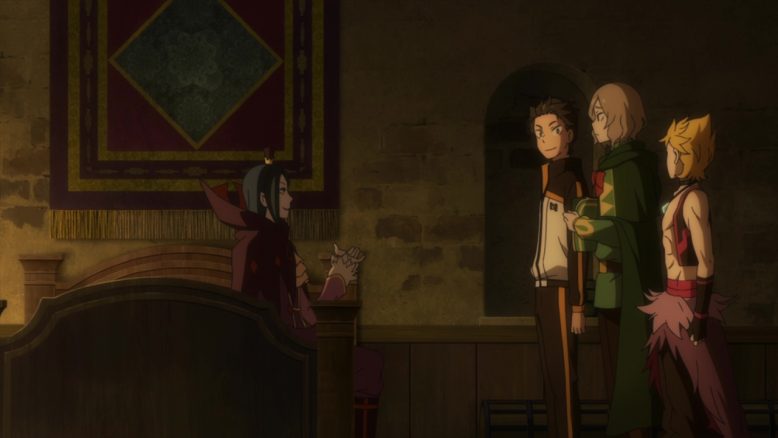 “And I would’ve gotten away with it, if it wasn’t for those meddling kids and that Otto!”

And honestly, the stuff with Subaru and Ryuze that’s been slowly happening in parallel, is infinitely more interesting to me as well. The true purpose of the Sanctuary, Subaru’s battle with Roswaal, all of that stuff is the stuff that the audience is hungering for. With Emilia’s first trial done, and Echidna more or less flat out admitting that she’ll handle the other two easily, well… The stage is set for the focus to shift towards Betty, Subaru, The Great Rabbit and the Mansion.

Oh, and before I forget, yes I have to say I was horribly wrong about Echidna. My suspicion was that Echidna was going to be the big bad this season, but she ended up being more or less a wild card than anything else. That does both the story and the larger world of Re:Zero a lot better than if it simply slotted characters into roles of good and evil. Echidna is neither, she’s just a selfish character that wants what she wants, and if our protagonists fall in line with that, she’ll help them, otherwise she won’t. Its that kind of nuance and unpredictability, that I love from this franchise, and why I’m more excited about what’s to come.

We have the larger conflict for the overall story now setup, we have a more interesting version of Emilia ready, and the focus can now shift to the final few issues. With six episodes or so left to go, the little conundrum of how Subaru is going to solve the mansion and Great Rabbit issues, is what’s finally coming next. That’s the stuff that I really want to see, and why I think I was okay with soldiering through these last three episodes, even if I didn’t particular like them. 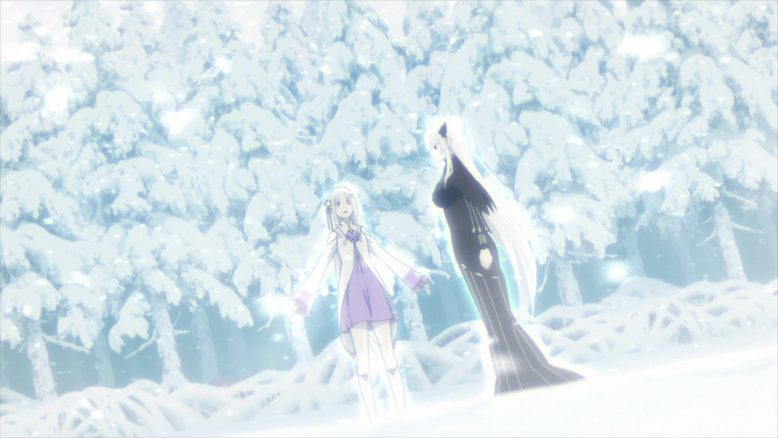 Echidna, the one character who will never be part of team Emilia.

Even a franchise like Re:Zero is going to have elements that just won’t work for me. Even some of my favorite pieces of media have flaws in them, and while I would’ve loved Re:Zero to have had a perfect run of episodes, its still vying for being one of the best series in recent memory. That, in itself, speaks to the talent and skill, of everyone involved.

Note: This is hopefully the last week this episode post is so darn late. I had the most insane week last week, so I didn’t have a free second until literally today. I expect to be a lot more free going forward, so I hope to cover the last six episodes on a less tardy schedule.