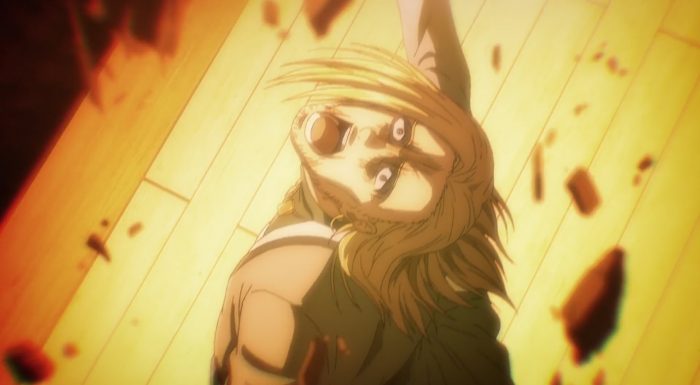 The thoughts I had after watching this week’s Shingeki no Kyojin were worrying ones. Thoughts that, honestly, point to this Final Season of Shingeki having some serious problems. Problems, which all stem from decisions taken while adapting this story from its source manga. Shingeki no Kyojin is probably an exceptional manga, with a lot of depth, nuance and interesting (if somewhat controversial) set of ideas in it. It is clear, however, that Shingeki no Kyojin the anime franchise and Shingeki no Kyojin the manga, are certainly very different beasts, and ones that aren’t as interchangeable as most manga to anime adaptations seem to be.

I’m not sure who said it to me, but a particular thought about manga and its relationship to anime has always stuck with me; Adapting manga to anime is easier than most other media, because the manga panels and pages can easily serve as storyboards that an anime series can just directly pull from. For some anime, that’s certainly true, where the manga is fast paced enough and kinetic enough, that animating it is as simple as filling in the little gaps between panels. Take a chapter or two, put in some connective tissue and you have a well paced anime episode.

Shingeki no Kyojin, however, as is evidenced by the Final Season’s first five episodes, is not that kind of series. This week’s episode? This is where I truly believe the season should’ve opened up at. This point in the story, with Willy Tybur’s exposition dump of a play, and Eren’s reunion with Reiner INSIDE Marley, all of this would’ve worked as a fantastic and bombastic start to the season. And really, I can’t help but wonder if we would’ve gotten just that, had Studio Wit and its directorial staff been the ones working on this. 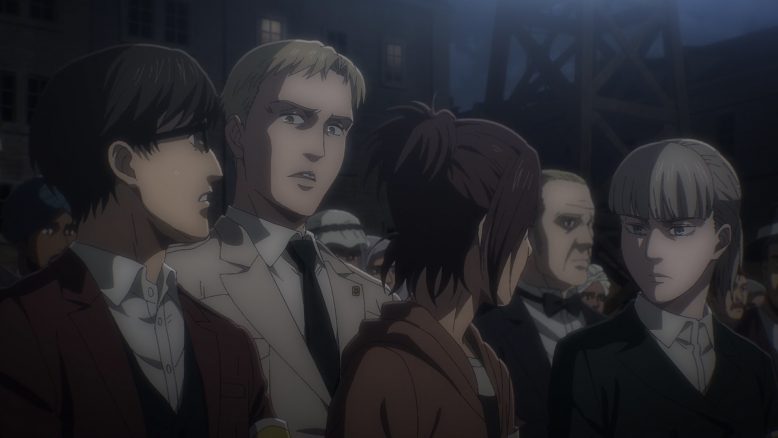 What a waste of time… and on these guys?

The pacing for this season has been off, and its hard not to hold those working on the anime series as the ones responsible. Its kind of sad really, because questions like whether the first four episodes of this season were actually necessary, were more or less answered this week. Long story short, the last four episodes were NOT needed, and all the exposition we needed to get the story going was right here, in this week’s episode. You could MAYBE make a case for the first episode of this season, but honestly this whole moment with Tybur’s play and Eren’s big attack immediately following the declaration of war against Paradisio? That’s where the story needed to get to, as soon as humanly possible.

You could argue, of course, that Reiner and the warrior candidate kids needed some development, but honestly, even all of that could have been handled via flashback. This slow burn of a reveal, really just kills any impact to all the cool stuff that happens this week. And lets be clear, some truly exciting things happen this week, even if my own enthusiasm for them was more or less killed by earlier storytelling choices.

Here’s the thing, if the show opened up with this whole play scene, then Eren’s whole depressed and moody outlook on life and the war would be interesting and mysterious. How long has Eren been inside Paradisio? What’s his relationship to Falco? All of that would’ve been so much more tantalizing if it was told AFTER this week’s events happened. Instead, we’ve already seen Eren for two or three episodes, and thus him finally making his move during the Tybur Play/announcement just felt like it was long overdue and nothing more. 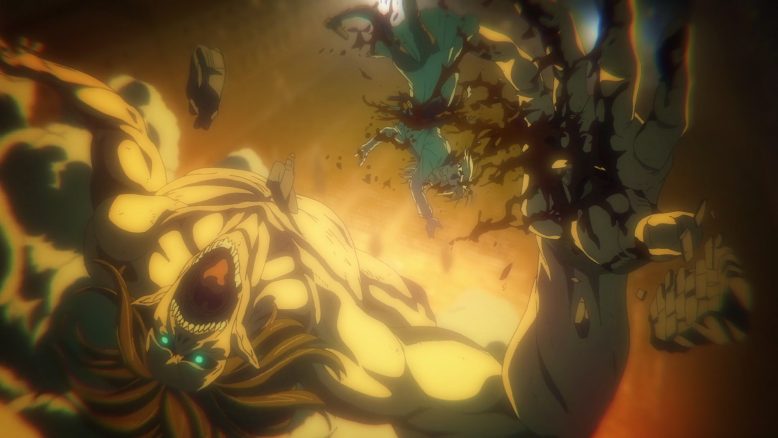 How Shingeki no Kyojin treats its exposition devices once its done with them.

Given that Willy gets iced by Eren soon after giving his speech, the character is most definitely nothing more than an expository device. Giving him development over the last two or so episodes serves literally no purpose, since his big role in the story is to reveal the “truth” (that the audience already knows about) and then declare war on Paradisio.

Speaking of the war, I will say, I’m a bit disappointed by Eren’s rather depressive response to this entire situation. After seeing the other side for himself, and realizing that his worst enemy is just as human as he is, well, his response is to just wage a war, anyway?

Its either kill or be killed as far as Eren is concerned, and while I think I get that, the depressed, “I don’t really care about anything” way in which Eren expresses himself this week makes him pretty weak as a protagonist. Look, I’m not going to argue that Eren has ever been the most interesting or nuanced character in this story, because he hasn’t. Eren was a loud mouthed, screaming machine that seemed to drive himself on his emotions and just rush into things. 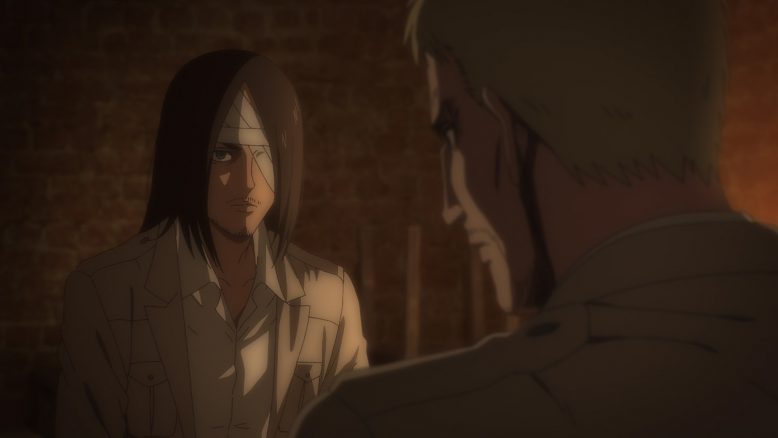 I can’t believe I’m saying this, but I kinda miss Loud Eren…

He got annoying more often than not, but there was an energy, a drive to the character. His reasons for doing what he was doing were somewhat noble, or at least justified. His character often gave some heart and power to those around him. Eren was annoying, but he kept things lively none the less. Here? Eren decides to go to war, because he just has to. He equates himself to Reiner and basically says that he’s doing this because he can’t help himself.

Gone is the character that rebelled against the status quo, and in comes a shell of man that just moves forward. Its honestly one of the big losses of the story, because now there really is no one that feels like they can be rooted for. Granted, I respect that Eren waited until Marley officially declared war on his Island before attacking, but man does he feel like the villain at this point. Fighting against an army, and launching an attack during a festival with non-combatants around? Well, lets just say there’s no heroism here to say the least.

Which, I guess makes the whole “war is bad” and “both sides are bad” angle that I was worried about, all the more plausible for this story. There’s no real side that we’re meant to root for here, as both sides are just as troubled and evil as they believe each other to be. 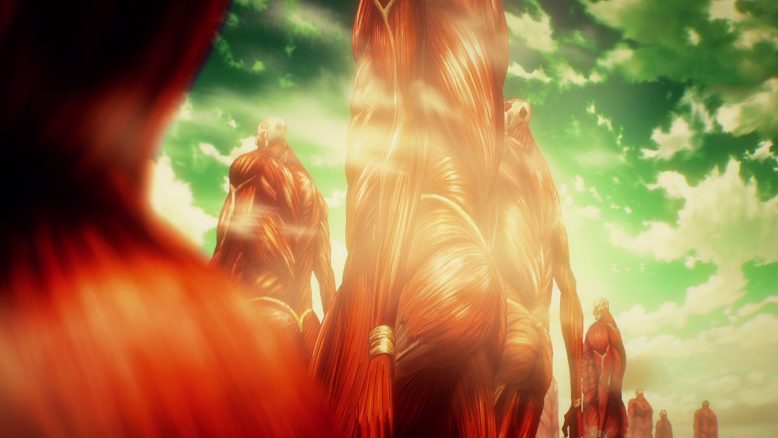 These guys? They went from being scary monsters to weapons of war…

The core theme of Shingeki no Kyojin has changed from “humanity’s last desperate struggle for survival” to “humanity’s constant war on itself to survive”. I feel like this sort of story can be found all over contemporary media. Novels, film, manga and anime have all covered this particular idea. The fact that Shingeki abandoned its much more fantastical angle and went for something like this? Well… It feels like quite a bit of a letdown.

All of that said, I suppose what we have to look forward to is a bunch of characters facing off and killing one another. Its clear that Shingeki has made the transition to a proper war tragedy story, and that weaker foundation coupled with a weaker bunch of visionaries telling this story on a smaller budget? Well, there’s no way that this ends up being anything special. There’s always a chance that the story picks up from this point on and surprises me, but I’m honestly not holding my breath.

Which, ultimately, is the real tragedy here. Shingeki no Kyojin was a franchise that made me hold my breath in anticipation for whatever it was going to give me next. The fact that the franchise’s final season is just a simple devolution on a smaller, less visually impressive budget, is perhaps one of the bigger letdowns of the new year.