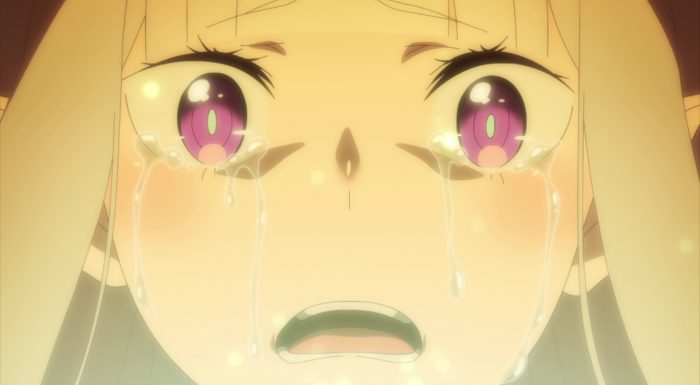 And we’re back, with perhaps one of the best airing anime series in recent memory. Re:Zero’s second outing in animated form has been a tour de force, with last year’s part 1 being one of the few highlights in an otherwise rather rough year. Part 1 ended on a strong note, and thankfully, nothing was really lost in the 3 month break since. Re:Zero is still firing on all cylinders, with an air of mystery, excitement and intrigue pervading yet another week of solid storytelling.

I must admit, when we closed off the last season with the “Otto-punch”, I didn’t expect Otto to open us back up with a killer speech. Yes, Subaru did try and trust someone, and yes it didn’t work out, but the person he trusted is what really matters. I had my doubts about Echidna from the start, and I still believe that she’s going to play a more antagonistic role in the future, but for now the villain of this arc is clearly Roswaal.

We found that out in part one after all, alongside a host of other issues. I had expected, coming into part 2, that we wouldn’t be moving quite so quickly towards a resolution of the double trouble Sanctuary + Mansion issue. This week, however, has me thinking otherwise. Subaru’s hatching together a plan yes, and he’s done that a few times already, but this time feels different. This time feels like the previous times when Re:Zero has finally presented a conclusion to one of its big conundrums. Subaru has a plan, he and Otto are enacting it, but the audience is being kept very much in the dark here. 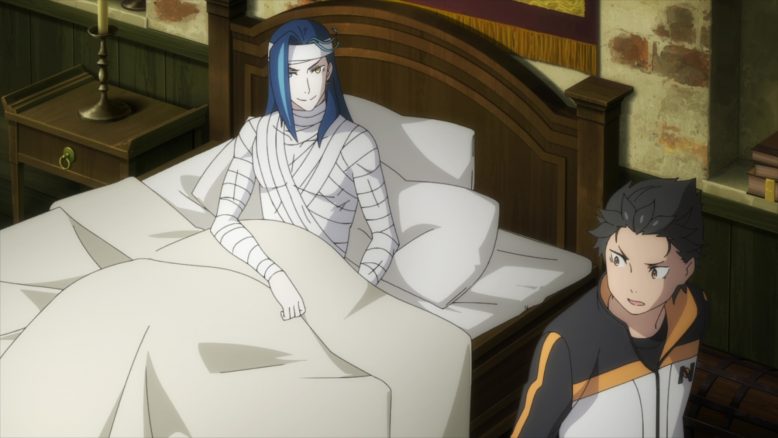 I would like Roswaal to put on his Clown makeup again too, by the way.

That generally only happens when Subaru’s about to finally succeed at something. It may not be all the way, but things are going to change dramatically, and do so soon I reckon. Which is good, because as interesting and exciting as the first half of season 2 was, I’m about ready for Subaru to finally start making some headway. I’m not sure my heart could take another shocking twist of pain for our protagonist, even with the show’s rather impressive ability to make that gripping and entertaining.

As to what Subaru’s doing exactly? Color me curious. Subaru’s first move is to set up his bet with Roswaal, with the end game being a complete switch over of alliances for his enemy. If Roswaal’s goal is to get Subaru to finally sacrifice someone, then Subaru’s is to make sure Roswaal stops relying on his book of fate, and to forge ahead his own destiny. Only after Subaru beats Roswaal can that happen, so the entire bet thing makes sense.

Its all bravado until Subaru actually succeeds though, which is why his declaration this time is pretty noteworthy. Subaru’s already kind of at a disadvantage, as Roswaal rightly points out, but I will say its a lot more interesting from a storytelling perspective, if Subaru turns things around now, rather than in yet ANOTHER reset. 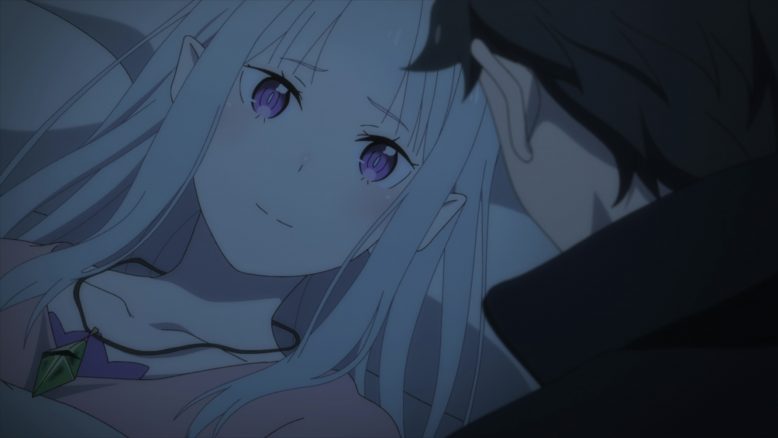 My memories can’t be locked away by something this cute?

To that end, Subaru has to take care of three things before he can tackle the bigger issues of the Rabbit and the mansion. The first problem? Emilia and her struggles.

Which, I have to say, man, was that unexpected. I did not expect Puck to just exit stage right in the first episode of part 2. Granted, we haven’t seen Puck much at all this season, but him breaking his contract and vanishing is kind of a huge deal. Its a bigger deal, I think, than it even seems like in the episode, where its treated almost as a side note. That has more to do with Re:Zero being as jampacked as ever (with yet another episode lacking an OP or ED). Yet, make no mistake, the implications for this whole Puck situation are pretty darn huge.

One, Emilia has lost her Spirit Arts and Ice powers now. Two, Emilia’s memories are now fully unlocked, something that Puck had been shielding her from with their contract. Three, One of the great spirits is gone, and with that, Subaru’s camp is in quite a bit of a bind. 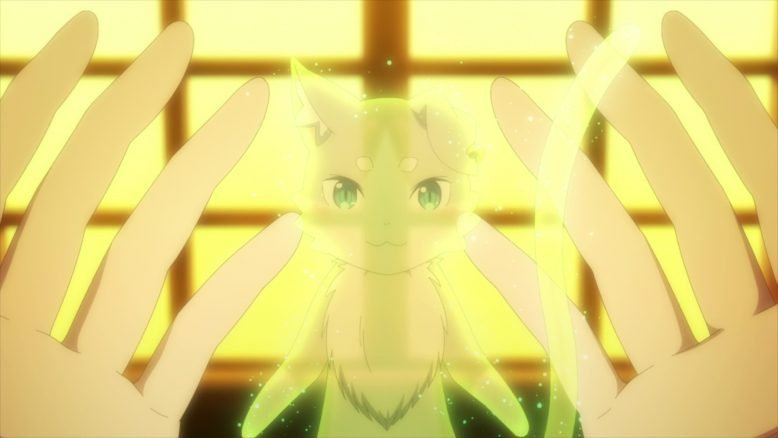 Now, I know I dunked on Emilia a lot in the first half of this second season, but I do believe that there might be a chance for her to have some sort of development here. Emilia as Satella is infinitely more interesting to me than vanilla Emilia, but seeing her finally grow into a character that’s actually worthy of Subaru’s worship would be… nice?

One of Re:Zero’s big issues for a lot of people, to the point of meme-ry, is Subaru’s tunnel vision for Emilia. Its quite frankly rather unearned, and while I admire Subaru’s faith in the girl he loves, I just wish I could see why. If this arc actually manages to make Emilia somewhat more powerful or likable, then I’m all for that. Its the one part of the story that hasn’t been working for me thus far, even if Emilia being Satella in the future, more than makes up for it.

In any case, Emilia’s whole deal is where this episode ends on, with Subaru finally read to push Emilia towards her own personal growth. There are some other things, however, that are equally important. Ryuze and Garfiel remain an equally important third party in all of this, and we learn that there are FOUR separate sentient Ryuze going around doing things. One of the four, Balima, seems to be more connected to Garfiel than the other three, and Subaru basically has to untangle whatever weird web there is on that side of things. 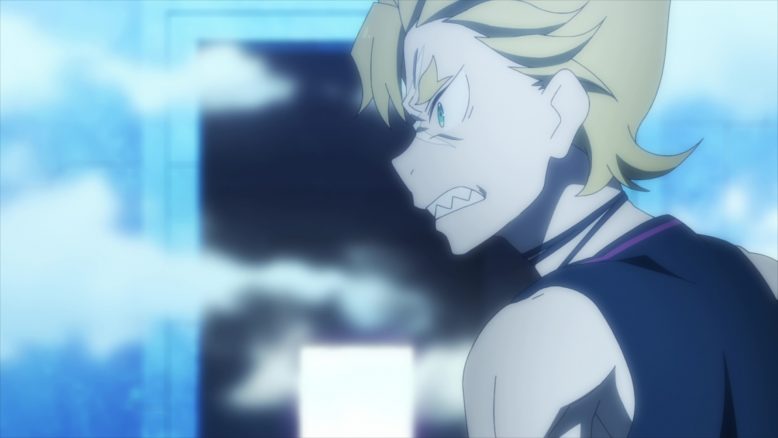 Otto better have some Lasagna prepared for this “banquet” of his.

Garfiel has to be convinced to move forward and come out of his shell, similar to Emilia, and Subaru unfortunately can’t exactly take the same approach here. Garfiel honestly, doesn’t interest me too much, as he’s a sort of wild card that seems to be lopped into a bunch of misunderstandings more so than anything else. He’s also a character that’s hard to take seriously after his Tiger transformation in the last half (reminding us of a certain Lasagna eating cat).

Garfiel, Emilia and Roswaal. Three big problems that Subaru has to contend with, and that’s before he can actually head on over and face off against the Rabbit and the assassins at the mansion. Never a dull moment with Re:Zero, that’s for sure. And its also that fact, that I think, makes this show such a joy to watch every week. I’m glad its back, because if 2021’s first few days are any indication, we’ll need some solid entertainment in the weeks and months to come.