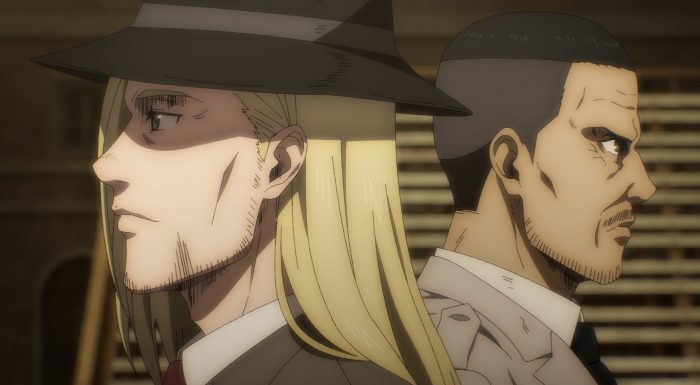 Four episodes in, and its clear that Shingeki no Kyojin, in its final season, has become a different kind of show. This is, perhaps, due to the shift in themes and scale, or maybe the change in studio and directors. Whatever the reason, Shingeki no Kyojin has changed, and unfortunately, at this point, not for the better. While I love the occasional slow setup episode or two… Four episodes of setup, beginning from the very start of the season, is a bit too much to ask. Its too much to ask in any show, let alone a bombastic, thriller franchise like Shingeki. Here, these episodes feels especially slow and especially painful.

Here’s the thing about Shingeki no Kyojin; its always kept momentum. Every episode, every moment in the series since the first season, has had something interesting in it that either pushes everything forward or at the very least, maintains tension and excitement. Even the first season, with its elongated chase scene in the forest, was still leagues faster and more exciting than what we’re getting here. And while a part of me can appreciate the nuance and careful setup that’s being crafted here, a bigger part of me is just starting to wonder something else.

That something, is about what’s important. Ultimately, I just have to ask: Was this really necessary? Did we need four episodes of slow build up to this so called Festival? Maybe we do, and maybe its essential to the story when its all said and done, but I just can’t help but feel like I got fed a bunch of filler fluff for four episodes. There’s some important things that happened, namely we got to see the messed up state of the Eldians in Marley, we got to see Eren undercover, we got to see Reiner’s guilt and we got to meet the Tybur family. 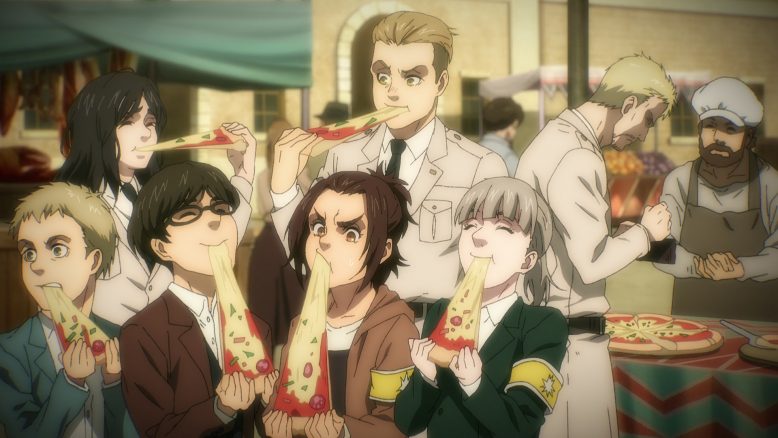 Lets be clear, a sitcom with these kids as the stars would tank pretty hard…

These four things are key I’m sure. These four major things could also, however, easily be communicated in the span of 2 and a half episodes at most, and maybe even 1.5 if you were going by old Shingeki standards. Shingeki no Kyojin as a franchise under Wit, (with folks like Tetsurou Araki and Yabuta Shuuhei at the helm) felt like a show that really trimmed the fat and focused on keep every scene engaging and interesting. Hayashi Yuuichirou and Jun Shishido, the directors for this final season (According to MAL), seem to have gone with a more careful, contemplative approach for these last few episodes, much to the story’s detriment.

What’s strange, of course, is that Hayashi is the same man who directed Kakegurui, which seems like its more inline with Shingeki’s over the top nature. And of course, Shishido has directed works like Hajim no Ippo: Rising which are as epic as they come. Now, while ‘m not a huge fan of their entire body of work, these two seem like solid choices.

Then there’s the other thing, which for the series I mentioned earlier, had anime studios like Madhouse doing a lot of the visual heavy lifting. Kakegurui, which was also done by MAPPA and features some really solid animation, however, kind of argues against laying the blame solely on MAPPA. By process of elimination then, we have to conclude that the production committee and the budget for this series are the real weak links here. 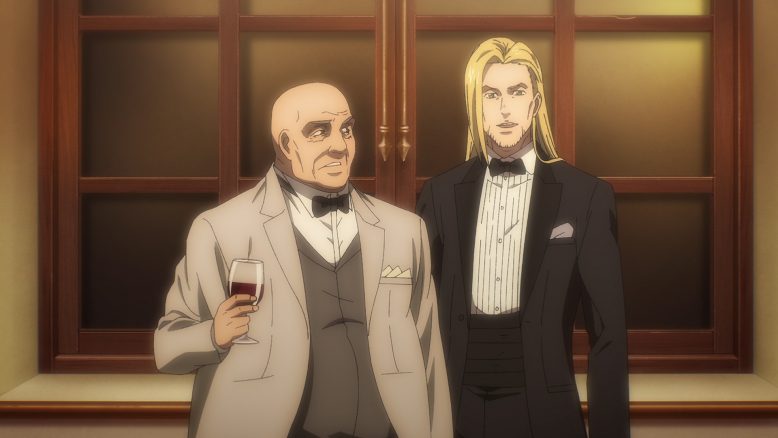 A bunch of characters talking and moving around is a lot cheaper than animating an epic battle scene. Maybe WIT can kick out amazingly well animAted battle scenes (with the occasional cheap looking CGI Titan) on a smaller budget, but its clear that MAPPA needs cash to bring the goods. My fear then, as we saw with things like To Aru Majutsu No Index III and Fairy Tail’s Final Season, is that Shingeki’s Final Season is just not being given the proper budget to actually deliver something worthy of its popularity.

Shingeki is a popular enough franchise, so at this point fans will watch the final season, whether its a work of art or not. Now, when you do this, there’s certainly a chance for things to go the direction of One Punch Man 2 (A series that I dropped after 3 episodes), but I think things aren’t quite that bad.

In the end, it seems like these four episodes, with their slow, unnecessary nature, seem to have come out of necessity. The ratio of epic battles to talkey walkey scenes needs to be balanced, and it seems like the production staff are trying to do just that. 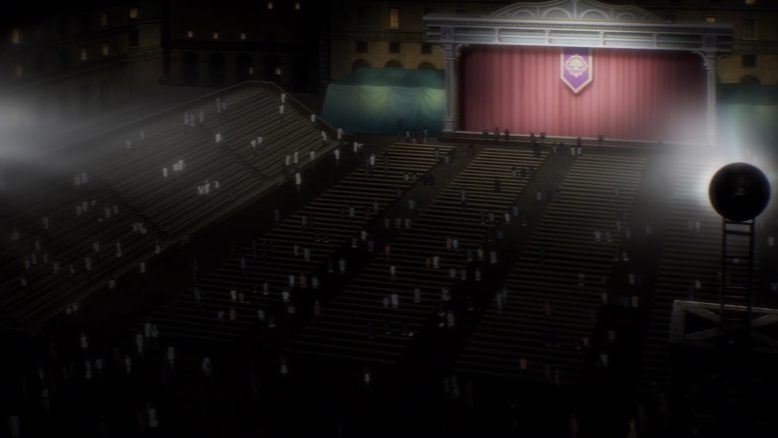 This party needs to start already! >___<

The problem, of course, is that at the very least, my enthusiasm for this show is starting to wane. That festival better kick off next episode, and Eren better get to whatever he wants to do, because I can’t stand another episode of faffing around in Marley.

Having said all of that, I will counter all the negativity that I’ve mentioned thus far by saying this; I am excited for next week’s episode in spite of what we got for the majority of this one. The whole Tybur political angle in Marley is super interesting, as is the whole “truth” that Willy (the head of the family, and the defacto head of the entire nation) plans to reveal. Falco being used by Eren, on the other hand, was both a bit of a surprise and a let down. It seems like Isayama-sensei is going for that “both sides are bad” angle in this war here. That’s an angle, that honestly doesn’t seem particularly novel or fresh.

In any kind of conflict, you need characters to root for. If Eren is just as bad as Reiner, then its hard to root for his side. On the flip side, the new kids we’ve been introduced to aren’t exactly stellar characters either (Falco is probably the most tolerable of the bunch). So who do you root for? If the answer is neither side, then I must say, that makes this all a lot less interesting, doesn’t it? 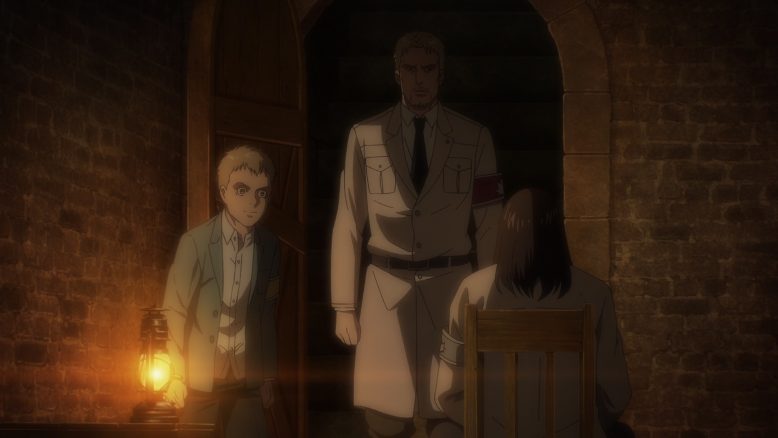 “Long time no see Reiner, I give you, YOUR basement moment” – Eren

In any case, the episode does end on an exciting note, with Eren finally revealing himself to Reiner. Finally, we’re past a point where things can remain stable, or even simple. The festival is upon them, and Eren’s going to make his intentions known (whatever they are) to Reiner post haste, so the conflict has to kick off. How will Falco react to Eren being the “enemy” and what has Eren learned during his time in Marley? He clearly made an effort to find his grandfather, and seems to have been quietly just taking in the sights during his whole spying period, but what does Eren think of all of this?

That, I think, is what the next episode and perhaps this whole conflict will hinge on. If these four episodes were intended to either humanize or add depth to Marley, then I think they’re a modest success at best. At worst, they feel like a pretty sizeable waste of time.

Honestly, I do believe that these story elements could’ve been weaved into the narrative via flashbacks mid battle. That would’ve also probably made them even stronger. That’s how Shingeki has done it in the past after all, and while I think its often rearranged elements from the manga, the end result has often been stellar. 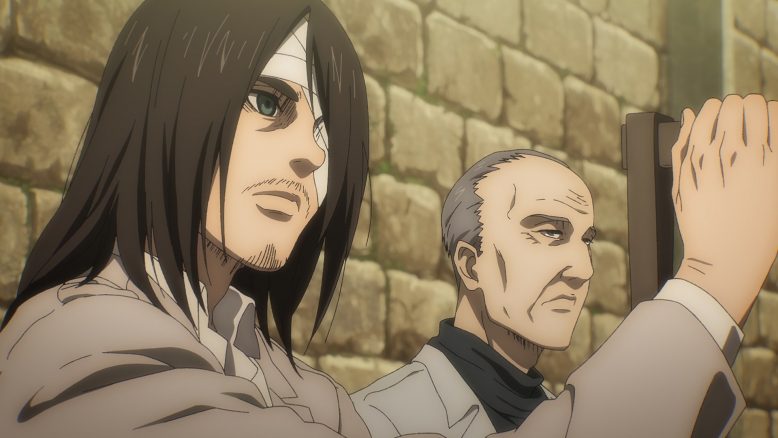 Just chillin with the Old Grandpa

It remains to be seen if this episode is the fourth in a rather slow start for this final season, or if its just another sign of things to come. I personally hope for the former, because at this point, I’m itching for that riveting Shingeki no Kyojin that we saw in the last three seasons.