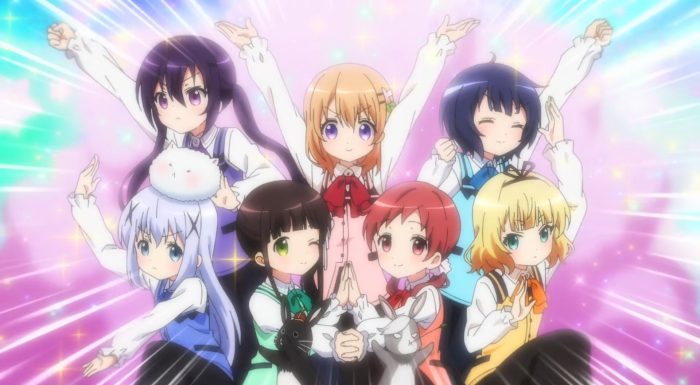 This Christmas episode was a perfect mix of being utterly fun, hilarious, and heart-warming. It really just captured what I could have asked for from this series. A very nice episode to compare against the Christmas episode in the first season. So much has happened and changed within a year for these characters. They are really growing and continuing to develop the relationships they’ve forged. I could absolutely get Chino being brought to tears from the joy of having Megu and Maya working at her café next year. Although she’s got some competition to hang onto them if Chiya has anything to say about it XD. 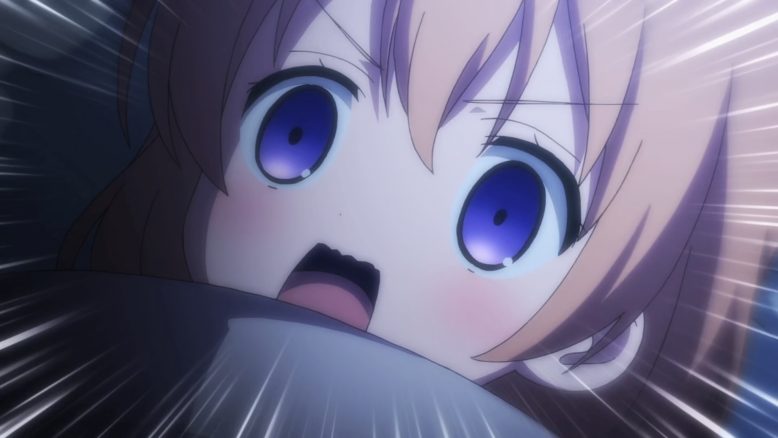 There were so many good moments that I have a hard time just focusing on any one of them. But I think the double surprise Santa was definitely worth talking about. I love the growth in having Chino take action and try to surprise Cocoa this time. Besides the fact that she’s become more like Cocoa over time, it just shows how much she cares. She doesn’t just want to be the person receiving things all the time and truly wants to give back.

Of course as expected of Cocoa, her gift has some issues. Or at the very least it wasn’t a great idea for Cocoa to not give Chino the instructions along with the clock! Still, it is a nice moment between the two of them. Goodness knows Cocoa has been handing out gifts left and right, yet she still manages to really come up with some solid gifts. As much as you can argue that she herself needs a clock more than Chino, it is a nice looking clock. And presuming they figure out how to turn the thing off it will be effective at waking Chino up! 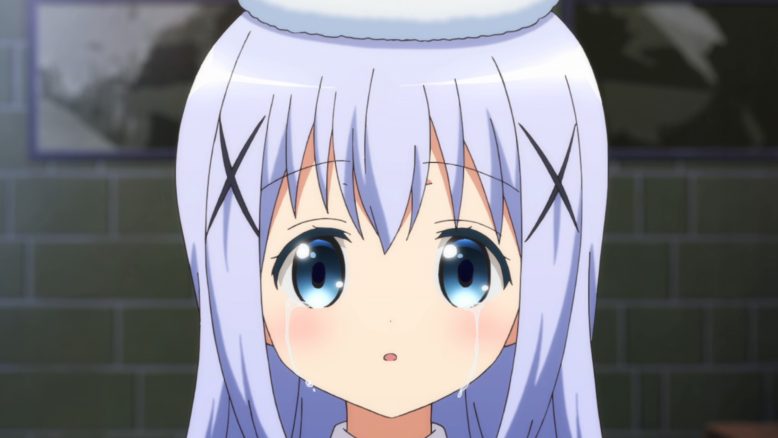 Of course if we’re talking purely emotional scenes, the best might have been Chino with Megu and Maya. You can imagine how worn out Chino has been with the café getting so busy. And she went into that day somewhat prepared to tackle it herself. Even if she was promised reinforcements it is hard to prepare for help that she doesn’t know the identity of. And yet the truth of it was her best friends coming to help her out. She couldn’t ask them herself since she was worried about getting in their way. Maya has a lot of work on her plate needing to clear some serious tests and get into Syaro/Rize’s school through the scholarship student position. And I’m sure Megu has been working hard so she’ll be able to go there anyways. With all that in mind they still took the time to help their friend out.

There’s no doubt that without them it would be tough. Chino would be running around and her father would be working on barely any sleep considering he’s still the bar at night. The overwhelming joy of having them around to help her brought Chino to tears and you could feel both her surprise and relief. Two of the people she most wanted to see were there to help her when she needed it most. And all of that was followed up with the realization that they might end up working with her at Rabbit House soon enough. Even if they are going in different directions for school, they could have this place to be together. 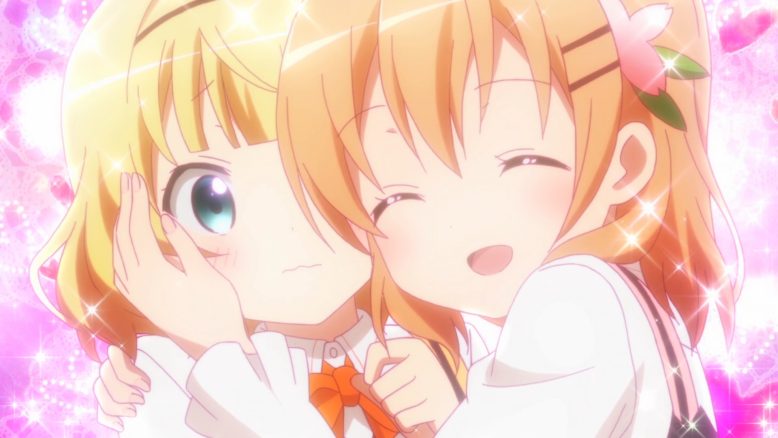 The Christmas party itself was a blast. I’m all for some good anime Christmas. A bunch of friends meeting up, having a great time, and happily exchanging gifts made for a great scene. Cocoa was embracing the role of Santa throughout the whole thing. They are probably right in that she spent all the money she earned working her butt off to get gifts for others. Be it the roasted chestnuts she got for everyone (including customers), her secret Santa gift, the extra gifts she got all her friends, and the surprise Santa gift for Chino. Not a chance she regrets any of it though. Cocoa is a truly nice person that enjoys seeing others happy. And yet she is well aware that she’s doing it because it makes herself happy. 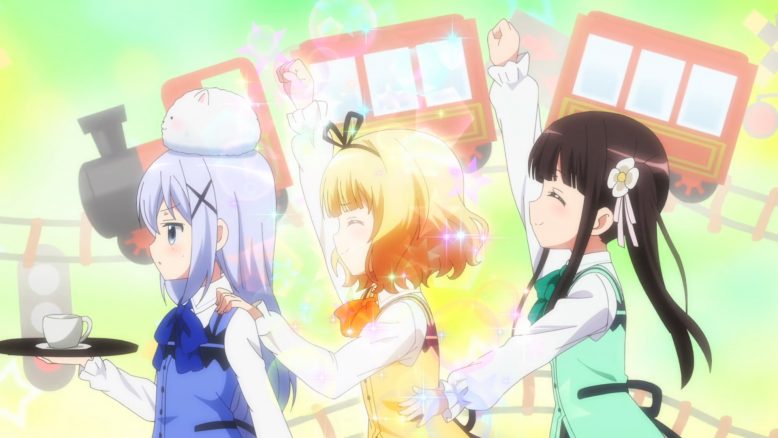 It is truly great to see the characters all working together even for a short period of time. This did happen the previous Christmas, but back then they weren’t all in uniforms. Finally those uniforms from the opening got their chance to shine. I have no doubt it was a wonderful thing for Chino and her mother. She couldn’t finish all the uniforms she wanted to make but that’s fine. Others were able to pick up that torch and make even ones she never thought to make.

Nothing to be taken away either from the joy of Chiya and Syaro being able to work together and wear the same uniform. Finally that desire was paid off from the previous seasons. I’m sure for Chiya it was truly a dream. Even if it isn’t working at Ama Usa An with Syaro, that’s good enough for her. A good reward anyways for helping Chino out. I’m sure it wasn’t easy to get coverage at her store so she could go over and help out. But the chance to help Chino and get to work with Syaro at the same time must have been such a win for her. 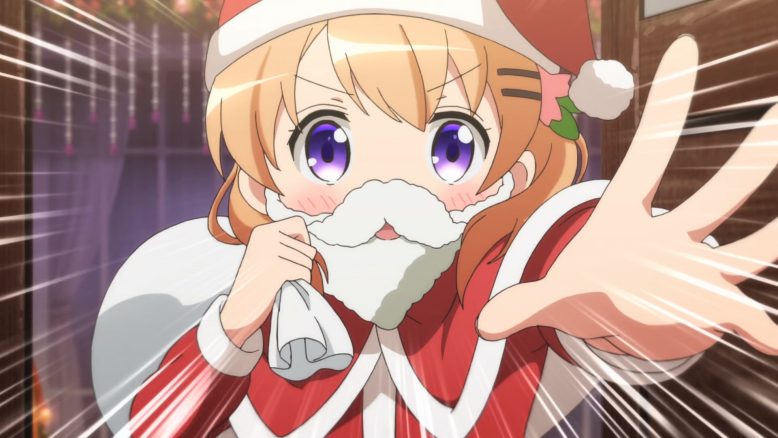 This episode was just great from start to finish. We got plenty of good moments like Rize/Cocoa being nervous about Chino enjoying working with Syaro/Chiya more than them. We got the Rabbit Rangers. Cocoa’s magic show really has improved with time. And heck, the show even gave us drunk on the smell of coffee Syaro. This was just about perfect. The only downside is that we’re so close to the end of S3 and I’m going to miss the heck out of this show.