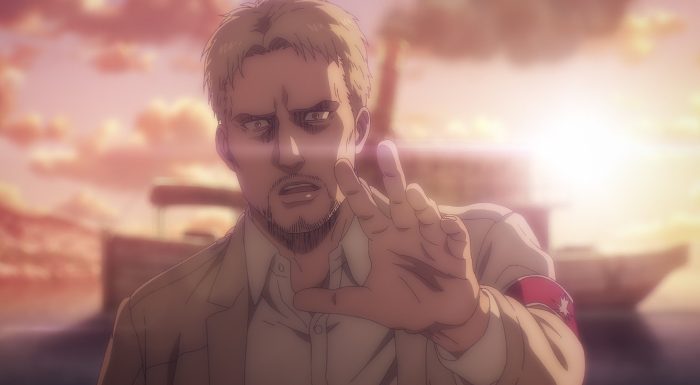 As Shingeki no Kyojin continues to build up its world and the politics inside it… A grim, twisted image is starting to emerge. Its hard not to comment on what’s going on in Shingeki no Kyojin without commenting on the secondary discussion that’s been popping up about the story’s themes and symbolism. And while we’ll definitely know all of that when this is all over, as of right now, things are ambiguous enough that its still hard to pin down what the crux of this story actually, really, is.

At the end of season 3, Shingeki no Kyojin changed. It evolved into a story that has much bigger and grander ambitious than what we had seen from it until that point. Gone was the whole “humanity’s desperate last struggle” angle, and in came in something a lot more political, complex and ultimately dicey. Now, while I spent the majority of my time in the first episode’s post focused on the change in studio and decline in animation quality, I think its this episode that really tugs us all towards trying to interpret what’s going with regards to Marley (the country), Paradiso (The island where Eren and co are) and the Eldians (a race of people located in both locations).

There’s a lot of people that argue that the Eldians are an allegory for the Jews and that Marley is somehow indicative of Nazi Germany. Stuff like the yellow bands that the Eldians in Marley wear, their “tainted blood” being spoken about all over this fictional world and even the militarized zones could be argued as being reminiscent of the internment camps in Nazi Germany. 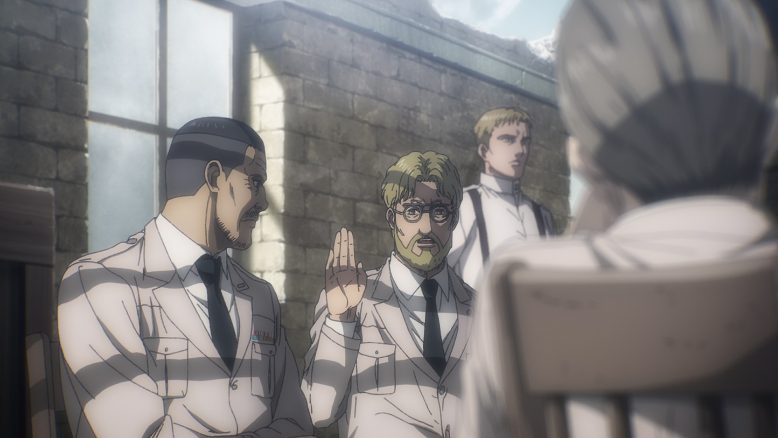 Zeke has a plan.

If all of these ideas don’t make you at least, a bit uncomfortable, then there’s obviously an issue there for sure. That said, there’s also a second interpretation, and one that I personally find a bit more convincing. An interpretation that points to the Eldians actually being a self reflection of the Japanese, and how they felt post World War II after having been defeated and occupied by the United States. That situation has it’s own rather problematic can of worms, of course, but the reason I think its that particular idea rather than something else… Is because of the way the Eldians are treated in Marley. A treatment, that, lets be honest, is nothing near what happened to the Jews in our own world’s history.

So, unless it becomes really obvious, that’s the way I am looking at all of this. There are pieces and bits that have been taken from world history at large, and some rather uncomfortable things at that. You could argue that Shingeki no Kyojin really shouldn’t even get this dicey, but well, art has always had political ideology behind it and stories as well. This is what is in Isayama-sensei’s head, and he’s presenting it to us in a rather odd, fantastical way. Its hard to say what the ultimate goal is here yet, but what I can see is that at the very least, the Eldians and Marley are not being shown in a positive light here.

Throughout this episode, the only thing I saw, was just how broken, twisted and messed up Marley and its society really is. There’s a huge focus on nationalism, over individuality and even basic human rights at times. Eldians are taught to “other” and hate a group of their own race, known as the “bad Eldians” that abandoned the rest and are the cause of everyone’s issues. As we the audience know from the events of the last season, however, it was the King of the Eldians himself that actually went into self exile. He did it, to avoid having the Titans and their power be misused for war. With that Isolation and self exile, came the dooming of his own people to forever be trapped in a fictional, twisted version of a world that’s actually much bigger. 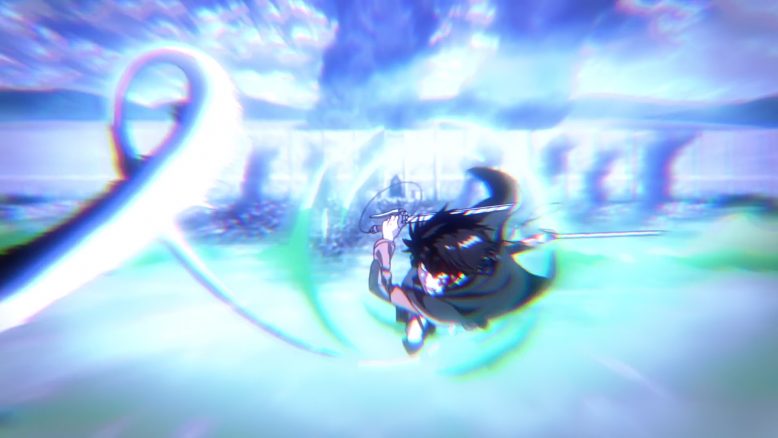 Only a special kind of life can birth this…

Eren’s life on the Island, Paradisio as it were, was messed up and twisted to a degree that felt insane, but…. Marley doesn’t feel much better. If Paradisio is this post apocalyptic dystopian society, then Marley is a more grimmer, twisted reflection of the world after World War II. Its where Nationalism, racism and fascism run rampant, and create a society where people talk about war and honor as if its the best thing since sliced bread.

As we follow Reiner and the other kids from the “warrior” combat unit, you really begin to see how everyone in this society, the elderly and the young, all seem to be brainwashed to love war, and dying for “Marley”. People like Zeke go as far as to use that whole structure for their own devices, as its clear that Zeke is more interested in getting revenge against his and Eren’s father, than anything else.

What’s perhaps, most fascinating, is how Reiner himself is starting to really come undone as he nears his end. Despite lying to himself, and continuing to swallow whatever bile Marley has indoctrinated him into, Reiner does seem to be having doubts about what he did on the Island, and what happened there. Its clear that what he’s saying, and what he’s feeling is at a cross roads, and its clear that he doesn’t want his younger family member to end up becoming a tool for war. 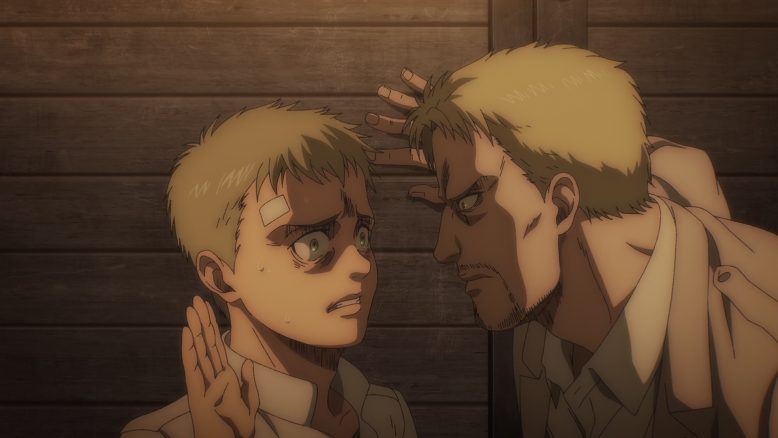 Yeah Reiner, hammer down those free thoughts. You monster.

And then there’s Falco, the kid that clearly wants his entire race to be free from War. Throwing in a kid like this, in a society like Marley’s, is certainly interesting. It echoes what Eren, Mikasa and Armin perhaps felt in their society, how they TOO very outliers. Eren dared to dream bigger than just “survival” while Armin wanted to “see the ocean”. It seems like there’s people that seem to resist the common and accepted idealogy on both sides, and it seems like these kids are going to be the real victims in the impending war between Paradisio and Marley.

Which, I suppose brings us to the end of the episode. We’re now two episodes into the final season, and we’re obviously still follow the Marley side of this conflict. Its clear from what little nuggets of info that we’re getting, that Paradisio and Eren’s side seems to be doing quite well. They’ve basically sunk every ship that’s been sent to them, and are generally probably building a society and a structure that can withstand an attack from a force like Marley.

The real interesting thing, I think, will be in seeing the contrast between the new Paradisio and the Marley we see now. Will one of these sides be ultimately better? Are we supposed to root for one side? Or are both sides just messed up, and its the characters that we end up liking and feeling for? I’m not entirely sure, but as it stands, all I can say is that everything feel dark, grim and complex. There are no easy answers with Shingeki no Kyojin anymore, and with character and world building focused episodes like this, a dip in animation quality is hardly going to hamper the storytelling. 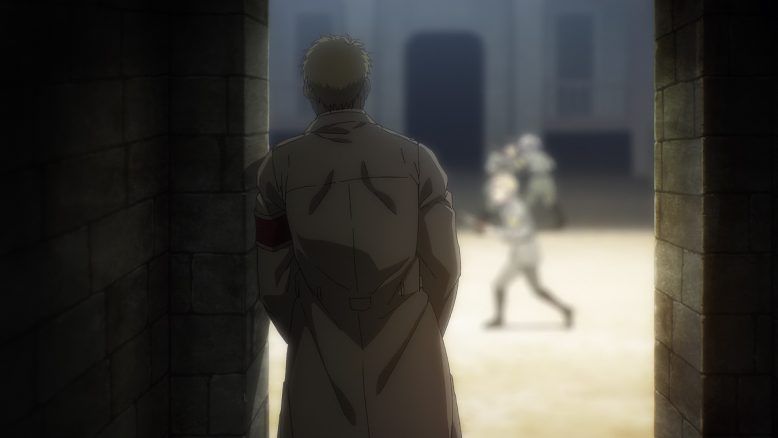 Child soldiers are just another fact of life in Marley…

I like how much depth there is to Shingeki no Kyojin right now, and how open to interpretation it is at the moment. Having said that, I do kind of miss the bombastic action and the hugely complex fight scenes and battles, so hopefully those return soon!