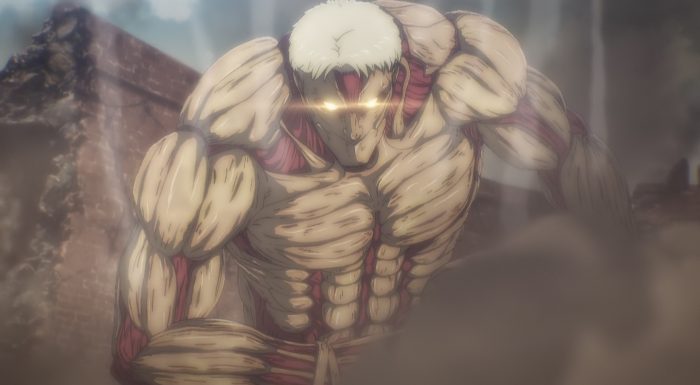 There’s certainly a different tone to the final animated season of Shingeki no Kyojin to say the least. While some of that is clearly intentional storytelling, some of it, is clearly not.

When it was announced earlier this year that Studio MAPPA was going to take the reigns from Studio Wit, fans were filled with a ton of trepidation with regards to this final season. Studio Wit had and has done a phenomenal job with the first three seasons, and having a new studio come in as the story closes out? Well, there’s obviously a fear that some of the animation magic would be lost. And of course, this being the final stretch of the story, there’s concerns that some of the larger themes of the story itself would finally take center stage, and finally bring fans face to face with some ideas that may be unsatisfactory, to say the least.

Now, with all of those questions and concerns, ones that I frankly shared, I dove into this episode earlier today with an open mind. MAPPA has done some amazing work not only in the past, but more recently with Jujitsu Kaisen, so there was definitely a possibility for them to replicate some of Studio Wit’s magic this season. And of course, Isayama-sensei, with his storytelling has continued to dazzle and impress his audience, manga or anime. So this season had some optimism in some of its fanbase. Basically, what I’m saying is that while I was letdown by the fact that Studio Wit didn’t finish off this series, there was definitely evidence to suggest that this final season wouldn’t be a complete dumpster fire (like One Punch Man Season 2, for example).

So… First, lets talk about the good news; Isayama-sensei’s story is still darn awesome, and gives us a new and interesting perspective to chew on this week, as an audience. After spending the majority of our time in this story with Eren and away from “Paradisio”, Shingeki no Kyojin decided to open up its final season by giving us a look at the outside world, and an entirely new cast of characters. 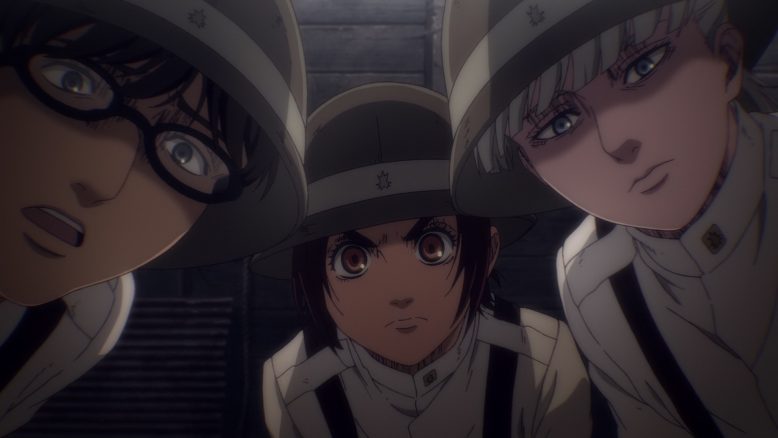 The new kids on the Shingeki block.

I will say, this was all quite interesting, and really endearing. The sense of mystery that often pervades this franchise, was just as thick this week, as it always has been. For the first few moments of the episode, I was just struggling to place the time period of what was going on here. Was this in the past? Before the whole Eren stuff even took place? Or was it something happening in parallel perhaps?

Turns out, the truth of the matter was that it was neither. We actually went straight into a time skip this week. Reiner and Zeke, having failed to get the Coordinate at the end of the last season, caused their whole operation to basically be put on ice. Instead of following that up immediately, we actually moved forward an unknown amount of time. Its hard to say how much time, but its far enough that we not only find a much older Reiner in this episode, but we encounter “his” side of this conflict is actively looking for successors to and for their “Special” Titans.

Having the “Warrior” Candidates be ones who we follow in this shift in perspective, is a clever move, and it makes the ultimate transition away from not only Eren palatable, but the change in animation studio as well. We’re seeing a different part of the story, in a different location and a different time, so things should be easy to forgive even if there’s a stark change what’s come before. 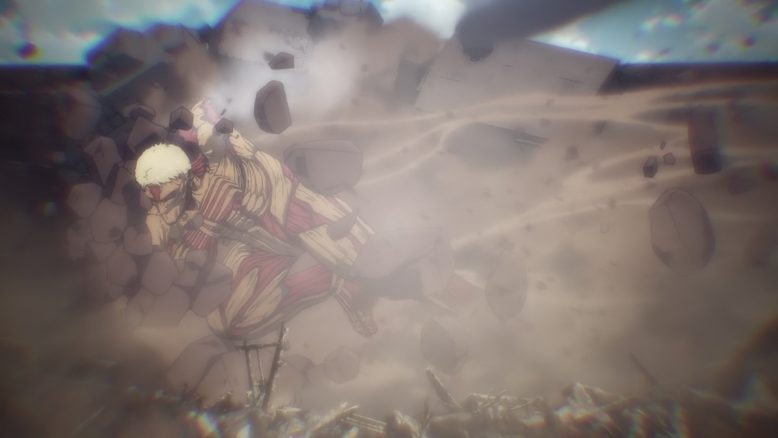 This looks okay, but is that enough? For Shingeki no Kyojin?!?!

I’ll be honest here, I was left disappointed. As someone who marveled at Wit’s work on this franchise, again and again, well… What we got here felt pretty subpar, even by MAPPA standards. Compare Shingeki to say, something like Jujitsu Kaisen even, and you can see that there’s a lack of omf here, for sure. I’m not sure if MAPPA’s best people are working on that other series currently airing, or if the production committee just didn’t allocate enough funds for this season (given that it will be a fair bit longer than the last few 1 cour runs)… But whatever the reasons,  The show certainly looked a lot less impressive than I had expected.

I expected a dip in quality I suppose, and I expected MAPPA to perhaps change the visual style a bit, but I still expected them to kill it… Which, honestly, they did not. While this isn’t on the level of J.C Staff’s One Punch Man 2, its certainly less impressive, to a point where its noticeable. 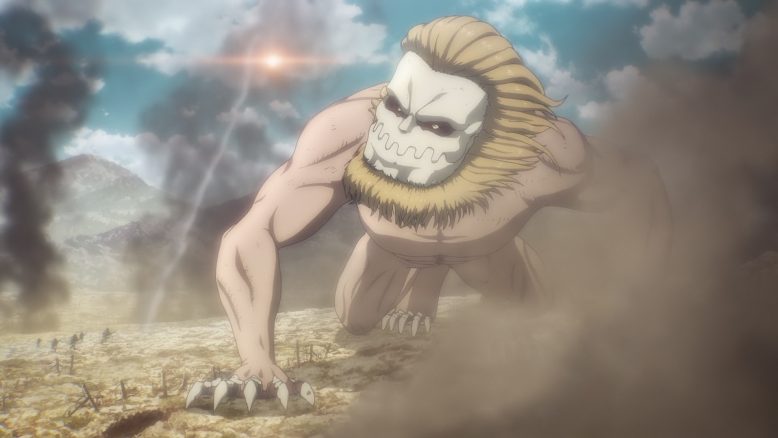 We’re calling this guy the Lion Titan from now on right?

Is this level of animation quality serviceable? Yes, it is. It certainly is, and the story here is good enough that most fans will probably soldier through the downgrade, But… I kind of think Attack on Titan/Shingeki no Kyojin needs to be more. It needs to be more than serviceable. It NEEDS to be impressive. It needs to be at the top of the Television Anime industry, as it has been before. It has to stand tall above the rest, like its contemporaries, One Punch Man, Kimitesu no Yaiba and even something like Jujitsu Kaisen.

So yes, steel yourself I suppose, because this story is going to feel a lot less impressive, the action less bombastic, and stuff like the Opening and Ending credits? They are going to be entirely skippable. Speaking of which, let me just say how sad it is that Shingeki’s streak of having really awesome OP/ED songs and animation sequences is more or less done thanks to this season.

Look, I’m not animation expert (though I do have some familiarity with After Effects), and man, did it feel like we just got a few stock effects thrown on screen with some pretty colors and some general fades and simple transitions. No Character moments, no implication of things to come, no artistic vision here. It just felt phoned in and hollow, and in a situation where MAPPA was already going to be closely scrutinized? Well, this certainly didn’t help. 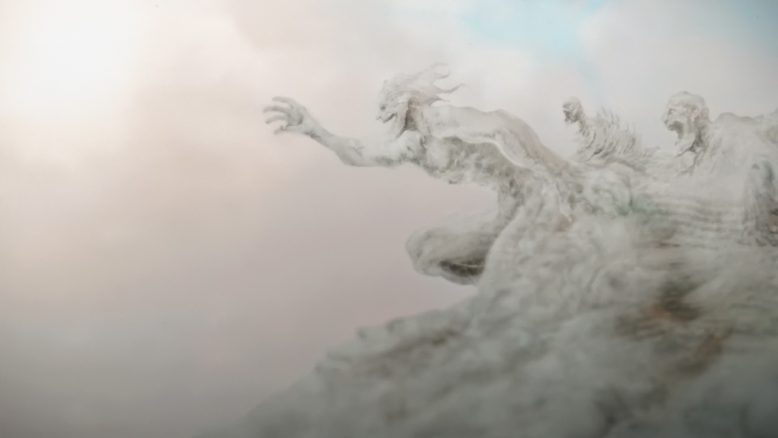 Gone are the amazing sakuga animations, in come the stills.

I’ll close out by saying that the trailer from earlier this year, actually hurt this premiere more than helped it (IMO). The trailer had some really nice shots and cool looking sequences, and its clear that those were few and far between; not indicative of the final quality of this show at all. I guess at the end of the day, Shingeki isn’t absolutely jaw dropping to behold this time, and that’s disappointing to say the least.

As for the story, I will say I’m very intrigued and excited. As I mentioned earlier, I enjoyed the switch in perspective, and I also love the idea that we not only got that, but that we’ll continue to have that for a while. At least another episode, maybe more, which gives us, the audience, time to wonder and stew on what exactly Eren, Mikasa, Armin and the rest have been doing since we last saw them. On top of that, I’m not entirely sure if Reiner actually died this week protecting Zeke, but at the very least, it seems like he’s on his way out.

With the clock ticking on these Nine Titans, especially for Eren’s side, I do wonder which side will blink first here. Maybe its Eren’s side that ends up taking the initiative and attacking, before their people die and lose the superb abilities of the Titans. Or maybe Zeke and Reiner’s side will end up finally resuming their operation, especially with the losses they encountered in this latest war that we got to see in this week’s season opening episode. 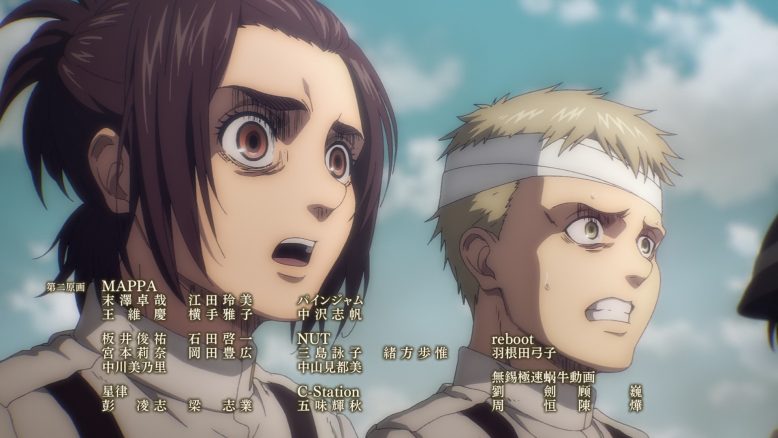 Everyone’s face when they found out I was covering this series, as well. 😉

Its all fascinating in any case, and I’m glad that I went beyond my own issues with covering this series, and decided to at least cover the end of it all. I’ve always regretted not blogging Shingeki as it was airing. I famously missed out on the first season, since I bulk watched half of it. After that, it just felt wrong to cover something that I hadn’t been with since the begining. That said, the conversation and coverage online has been mixed and muted as the seasons have gone on, so I feel like my covering this series has some value. I’m in it now, so I hope we can all discuss, speculate and enjoy this series together. One last time.