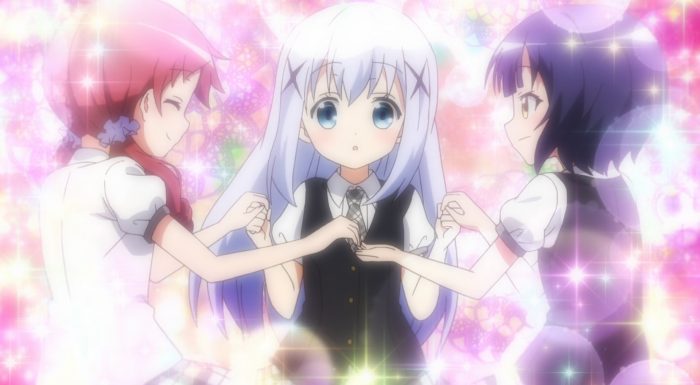 This series continues to deliver with a strong third episode. It was a good move to focus a bit more on Chino, Megu, and Maya after the latter two weren’t major players in the opening episodes of this season. It also allowed some more focus to go towards the high schools some of these characters attend and reflect the passage of time which is constant in this series. This did leave me thinking about what might happen in the future with Chino, Megu, and Maya all set to head to high school soon and of course Rize will be graduating from her school at the same time. 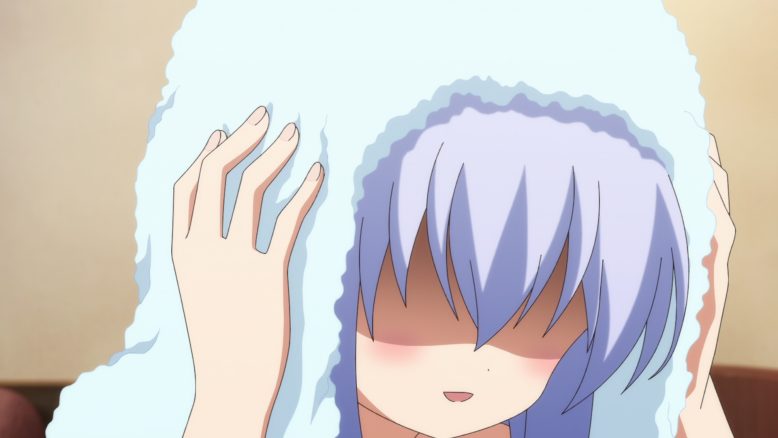 I honestly felt a bit of unease in terms of what Chino might decide to do. Of course it isn’t a big deal where Chino decides to go to high school. No matter what she’s spending a few years of her life there and very likely deciding to run Rabbit House full time after graduating. But I felt the unease about what she might end up deciding to do. There are two ways this could go with this episode at least opening up the opportunity that Megu and Maya may both end up going to Syaro’s school. It leaves her having to make a decision on this issue. Does she stick with her friends and try for Syaro and Rize’s school? Or does she go ahead and move on to Cocoa and Chiya’s school?

There’s of course no doubt that she would enjoy going to the same school as Cocoa. Even if that result would only last for a year before Cocoa graduated. After all while she said she might just take that exam it did feel like she was only teasing Cocoa. But that was before actually going on the tour. The pull of being with her friends through high school would be strong. But, I can still see her going effectively the Syaro route of being separate. She’s not getting that scholarship like Maya might be able to which would make it a pretty serious investment. One I’m sure her father would find a way to make happen, but there are sensible reasons to avoid the rich girl school. My preference would be for her to stick with Cocoa and Chiya for a year. But just a preference. 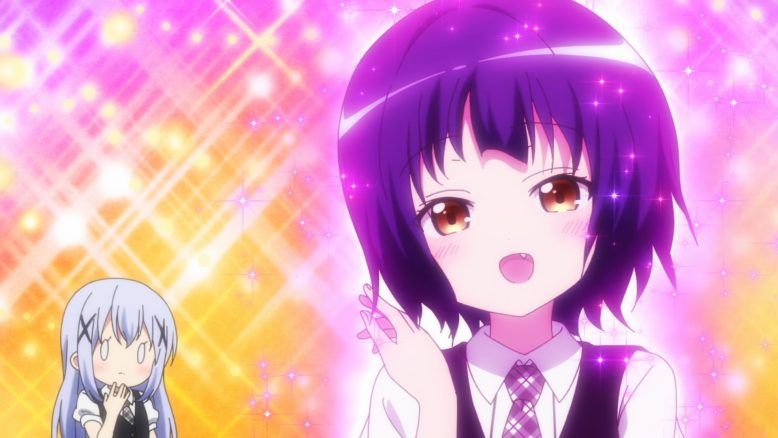 Of course the figure that stood out to me the most in all this was Maya. I honestly didn’t expect her to feel a pull towards going to the same school as Rize and Syaro. Of course we knew the scholarship student existed. Syaro being that student for her year has been a pretty important aspect to her character and a reason she’s there at all. But even with the speech given by Aoyama’s editor I didn’t think that Maya had such elite grades that she’d be an option to get that scholarship.

But, it does make sense. Her focus last season was also on high school concerns and her conversation with Rize reflected how deeply she was affected by this. Makes sense on some level that she’d go from being terrified about Megu going to this school to actually being intrigued by going herself. Although whether she goes with Megu and Chino is still hard to be sure about. It’d be a big win for her to go with her friends even if it isn’t to the school she initially foresaw. 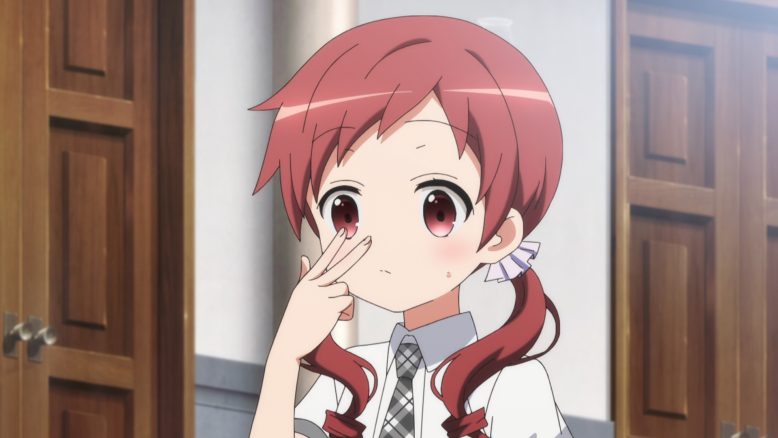 Maya honestly seemed geared towards this sort of thing. She realized that the intimidating rich girls…are just girls after all. She can look at interacting in this setting as a kind of game and in that respect she has remarkable adaptation skills. Honestly she might have an easier time than Syaro did. I don’t think she’d be all that worried about hiding her scholarship status and might actually expand the worldview of her fellow students a bit. Something that is probably one of the reasons they have a scholarship system in place.

Megu was hyped for this of course in the first place. She didn’t seem to be as comfortable as Maya, but that reflects their different personalities. She did have some fun I think going all “yes sir” with Rize. And I don’t think she will have changed her mind on going to this school. But I did find it just a bit interesting that she wasn’t quite a fish to water like Maya was. 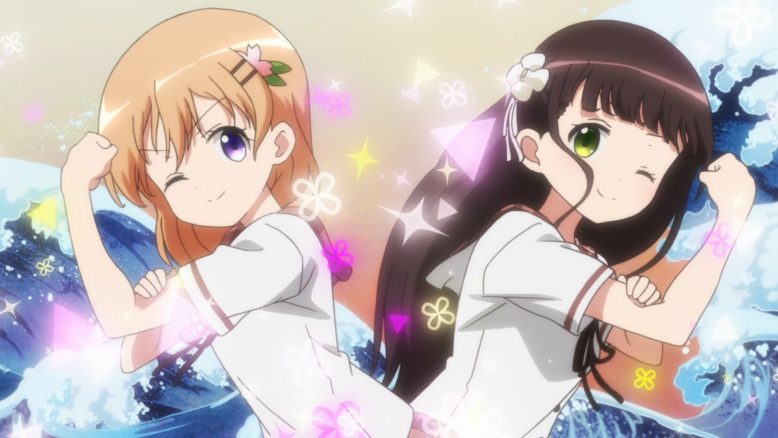 I am looking forward to the school festival as well. I think Cocoa and Chiya will make for an interesting pair in running this restaurant. We’ve seen them when working together at Ama Usa An. They can be pretty weird and lazy on their own, but combined they are a force. Honestly, I kind of wonder if this school festival won’t be a pulling factor for any of Chino, Megu, and Maya to Cocoa’s school. They obviously have good feelings when it comes to Rize and Syaro’s school. But they did just go on a tour there. A mental bias would be there when you are comparing something to an unknown. But even without that factor the festival should be a good time. 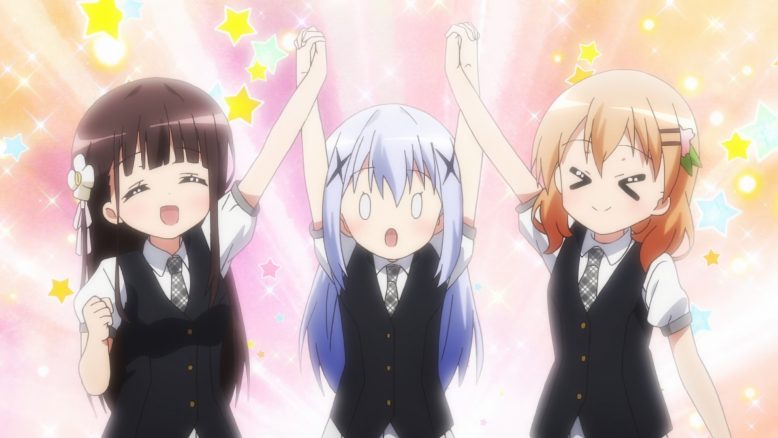 This was just another really good episode. I honestly enjoyed seeing these characters expanding their horizons. A move from one grade level to another is a big deal. And I honestly felt uneasy that this situation might sway Chino. Honestly, my soul just wants to see Cocoa and Chino going to the same school. But I still think that will happen. I give credit to the show for making me care about all this. I didn’t think it was even an option for Chino to not go to Cocoa’s school, but you just never know.