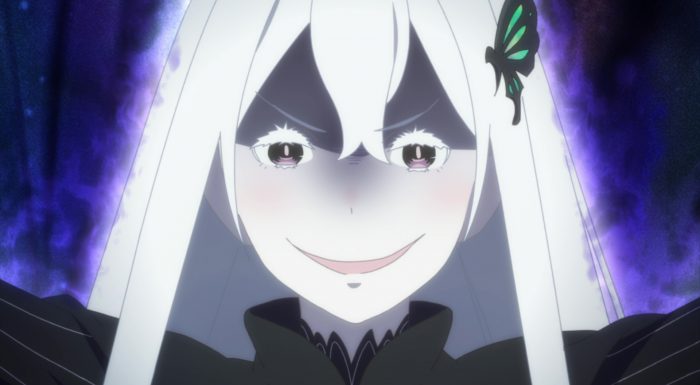 So this is what the penultimate episode of a good anime season is supposed to feel like. After all this time, I almost forgot how it felt to be properly hyped and excited for a season finale. A season finale that, I might add, is only for the first part of the whole second season for Re:Zero at that. Yet, despite the fact that we’re only in Part 1 of a two part season 2, the show and those behind it seem fully intent on delivering a smashing and exciting finish before they go on their scheduled break.

Re:Zero has been good, exceptionally good, and the fact that it’s getting to be at it’s most exciting as it nears the midway point, is an even bigger gift. I remember when I watched stuff like Code Geass and even Gundam OO, where those shows really did close off their first parts on a high note. Too often, split-cour shows seem to be just an awkwardly sliced up two-parter, rather than being two properly planned and distinct halves to a whole.

If there’s one thing that’s very apparent about Re:Zero, its that everyone involved really respects and lauds the story and source material. Unlike recent light novel adaptations like say Index III, the story being told here has been meticulously planned out, been given a solid budget and is driving towards telling the best possible story that can be told in the Anime medium. 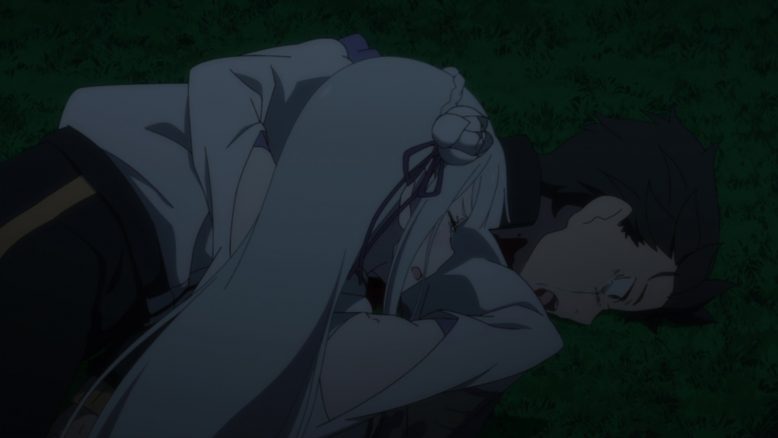 Again, this week had us getting a whopping 27 minutes of content, all without an opening or ending credits sequence at that. Where anime these days will short change their audiences with long recaps and a minute or two long credit sequence book ending each episode, the people behind Re:Zero are super passionate and just want to tell the story they want to tell, minutes, runtime and conventions be damned.

And that story? Man is it getting really really good. With Subaru finally at the end of his ropes, he ends up deciding to go back to the Sanctuary temple  to ask Echidna for help, and that’s where things really kick into gear.

First Subaru ends up experiencing the second trial, and boy is it a dozey. The rials ends up showing Subaru potential timelines where he died and left behind all those he cares about. The horror that his death left behind in its wake. A horrific realization, and one that Subaru had not even thought of (alongside the audience itself). Its no surprise that this particular fact hits Subaru hard. Its quite clear that Subaru is going to have to come to terms with the fact that Subaru himself might’ve left behind some serious pain every time he reset. 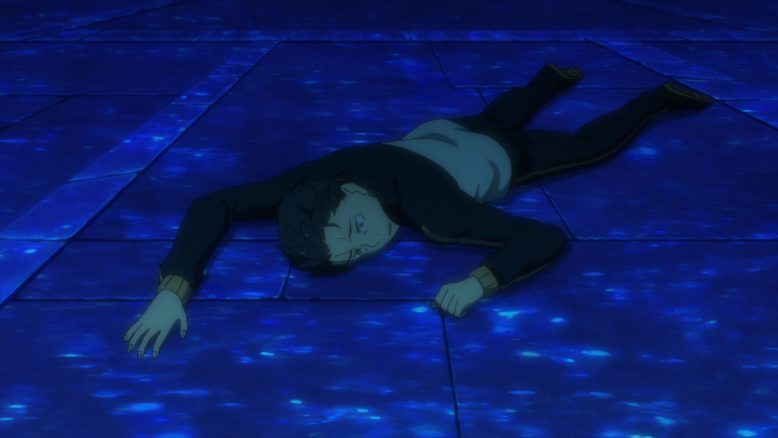 Its all about Subaru basically coming face to face with the consequences of all the mistakes he’s made. Its unexplored territory at this point, and while I’m sure we’re a long way from Subaru being strong enough to overcome this second trial, its sure as heck is impressive as an idea none the less. Nagatsuki’s ability to use his one core idea, Resurrection by death and then mine it again and again like this is just truly a skill that only he possesses. The well just never really dries up with him, this resurrection ability or Subaru.

Subaru is a character that continues to suffer and then grow because of the very double-edged power that he has. A power, I might add, that seemingly everyone else in the story seems to hunger for. Which, incidentally, takes us right to where Subaru ends up encounter another of the Witches and then ultimately gets whisked back to Echidna’s domain for the next round of twists and revelations of the story.

Before we get into all of that, I will say this first: I’m generally never right when it comes to shows like this. When it comes to Re:Zero, I’ve been off the mark not once, not twice, but 99% of the time. And in general, its rare for me to predict and guess certain story beats correctly for shows that are really good. Full Metal Alchemist, Code Geass, Gurren Lagann, Boku Dake ga Inai Machi, Monster e.t.c. One of the reasons I love all those shows and even Re:Zero is because they’re really hard to predict. 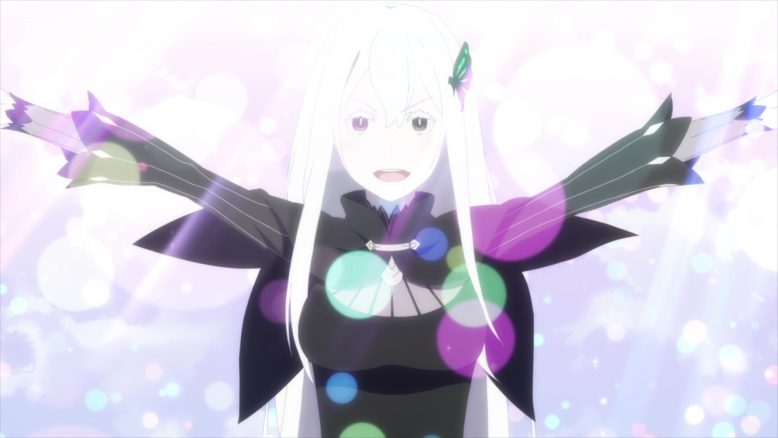 Yet, having said all of that, let me just say… I saw the Echidna thing coming a mile away! Like seriously, while people were all out on the internet calling Echidna the new best girl, I was out here, in my little corner, continuing to speak against her. And yes, It was so vindicating this week, to finally see Echidna reveal her true colors. To finally start to see the cracks in the facade, and for Subaru to FINALLY realize that Echidna isn’t the goddess of hope that he had made her out to be. No, Echidna is perhaps the most dubious and suspicious of all the individuals Subaru’s encountered thus far.

Echidna’s motivations for helping out Subaru have been leading up to her trying to trick him into a contract. A contract, that, I think will ultimately end up causing disaster for Subaru in the same way that it did for Beatrice and even Roswaal. Yes, its not confirmed yet, but my guess is that the Tome of Wisdom is something someone receives after forming a contract with Echidna.

And Echidna? I think her whole shtick is finding people with huge burdens and weights on their shoulders, and manipulating them into contracts that put them into even more problematic situations. 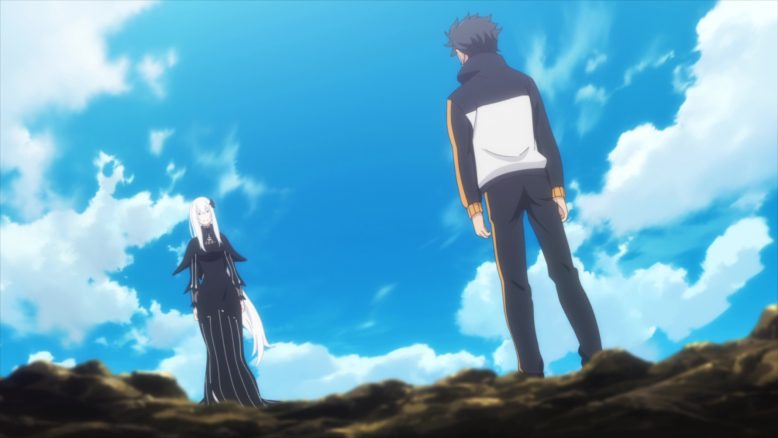 As is the case with Beatrice, who it turns out is waiting for “someone” that Echidna herself doesn’t even know the identity of. That person being an open choice so Echidna could find who Beatrice would choose, is messed up, and it points to the fact that all of Beatrice’s misery is from being given an impossible task and then not being given all the directions to succeed.

And Roswaal? We know how twisted and messed up he became. Subaru, at the beginning of the episode, rightly stated that he wouldn’t become like Roswaal, and yet its funny that he did actually came ever so close to doing just that.

Its only through the intervention of ALL the other witches, that Subaru finally begins to suspect his big benefactor. Echidna’s first of many lies and omissions is revealed, one by one. As all the Witches appear (something that was seemingly not possible according to Echidna), it becomes clear that the episode’s title is referring to this particular moment; A meeting of all the witches of this fantasy world in the form of a tea party. 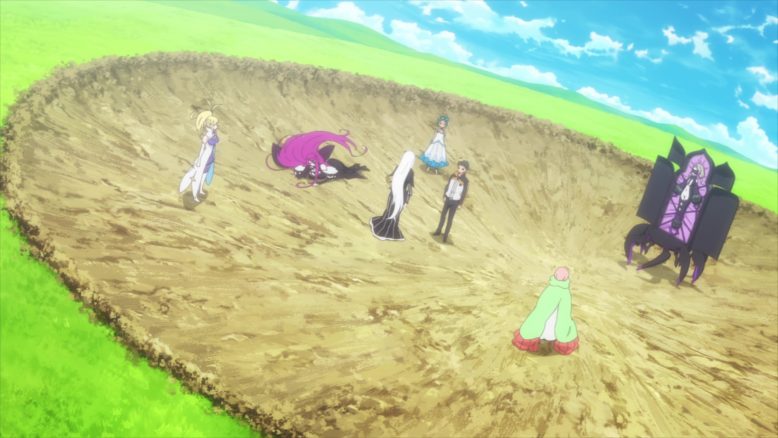 Its frigging cool to see the remaining witches, and have them basically warn Subaru that he’s not really aware of what he’s getting himself into. All the Witches are twisted in some weird way, but I think its obvious that Echidna is the most dangerous of them all. A sociopath with limitless curiosity and an insane amount of knowledge? That’s one scary being indeed.

But of course, it wouldn’t be a Re:Zero episode if the show didn’t add a last minute twist and one-upped itself one final time. Which, of course, it does as the episode ends with not only Subaru refusing to form a contract with Echidna, but the whole Tea party coming to a massive halt with the arrival of the final Witch; Satella.

Satella, in the Witch’s realm, freely interacting with Subaru and all the other Witches? MAN, that is exciting, and there’s so many questions raised by this one final little tidbit that it sets up the next episode oh so beautifully to deliver once again. 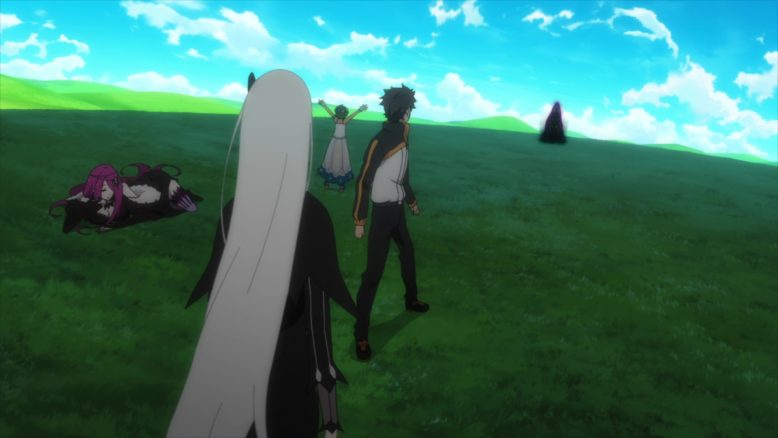 Which version of Satella is this? We know that Emilia transforms into Satella in some fashion, but is this her? Is Satella possessing Emilia if she’s in here? Is this a different version of Satella? How lucid is she going to be? Is Subaru going to count Satella as a friend or foe here?

There’s so many burning questions, and while I had thought that we had gotten the lion’s share of info regarding Satella, it seems like Nagatsuki-sensei and the anime production staff are happy to provide more.

Its just so weird, to keep getting back to the main crux of the story, the thing that generally writers and stories keep tucked away till the end. There’s a level of confidence here as Re:Zero just continues to touch on its core mysteries again and again and again. It elevates the show, and makes it a true joy to watch. 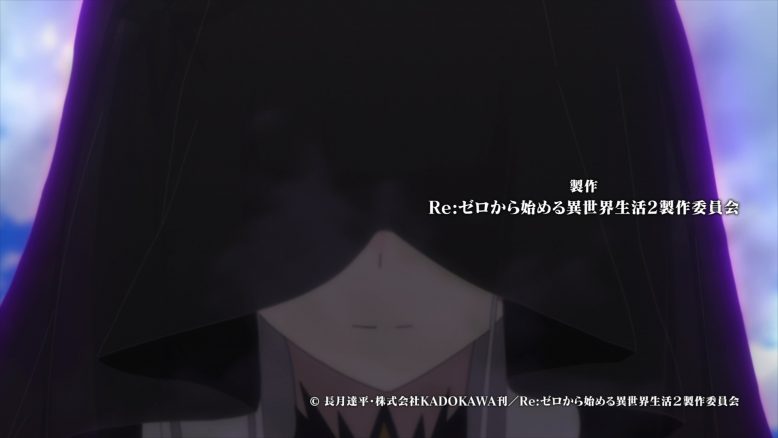 Speaking of joys to watch,  I have a really good feeling about next week’s episode. Sure, we won’t resolve Subaru’s latest conundrum, but we will get some answers regarding Echidna and perhaps even Satella. Where these two witches stand, and what their ongoing dynamic with Subaru is ultimately going to be.

One week away from the conclusion to part 1, and Re:Zero feels as exciting and powerful as it can be. That’s exactly where you want to be, as you deliver the last morsel to an audience that’s probably going to be as greedy and hungery for this story as Echidna is about Subaru’s power. Next week can’t come soon enough!