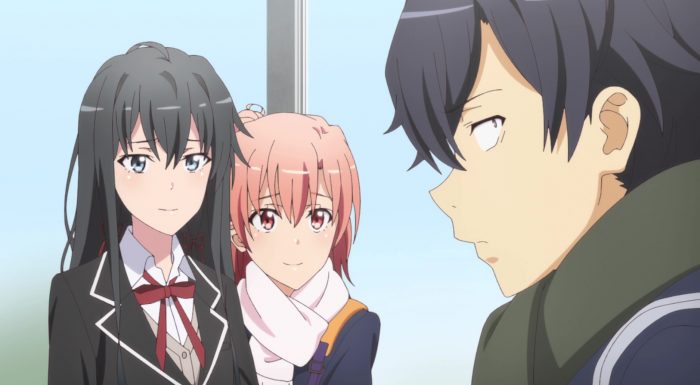 Yahari Kan continues to maintain its upward momentum, and things are certainly looking good for the series’ impending conclusion. This was perhaps the first week, the first episode of season 3, where I think the show actually was able to make me “feel” exactly what it wanted to. This was the week where I finally felt myself fully transported into the world that the series production staff and Watari-sensei have crafted so expertly. Its an experience, that’s certainly been long overdue.

I will say this, this was probably the most powerful episode of Yahari… Ever. Powerful, emotional, and the whole thing worked really well together, with each scene connecting effortlessly into the next. Each scene also felt real and every moment felt fitting, something that I think I expected from this series when episode one first aired. I’m not sure if this was the team behind this series finally finding their rhythm, or if I’ve just acclimatized to the show has been giving me all along, but I am really impressed with what I’ve seen thus far.

Impressed, powerful, expertly crafted, “made me feel”, these are all descriptors that praise the show, but it is notable that I never once mentioned things like “liked” or “satisfying”. That’s because even though this week’s episode was solid, impressive even on a technical and storytelling level, the level of unease, melancholy and awkwardness that protruded from every aspect of the show was a bit unsettling. 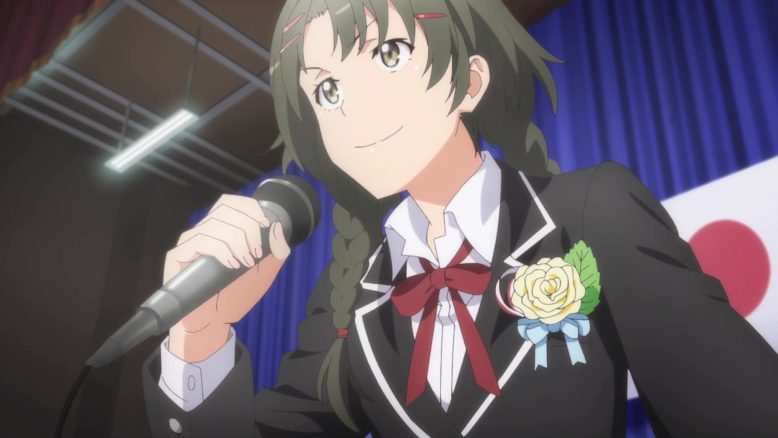 Unsettling in a good way I’d say, even if I do hesitate with that particular statement. Yahari felt real this week because it so effectively communicated the loss, pain, awkwardness and hollowness that teenagers go through in the particular period of their lives that Yahari is set in.

Lets be honest, things really suck for Hachiman, Yui and Yukino right now. They particularly suck for our protagonist, who is basically doing the best he can, and trying to remain as honest and true to himself as he can manage. Hachiman, despite how awkward and socially inept he is, is trying to resolve things and push forward. He’s well beyond his comfort zone, and yet if only for the sake of those that he cares about, he continues to push himself.

Everything Hachiman goes through this week, is difficult. His conversation with Yui, his visit to her house, the odd run-in with Yukino and Iroha, not to mention even the conversation at the beginning of the episode with Komachi. You can feel and even experience some of the weight that the poor kid is carrying over his shoulders. 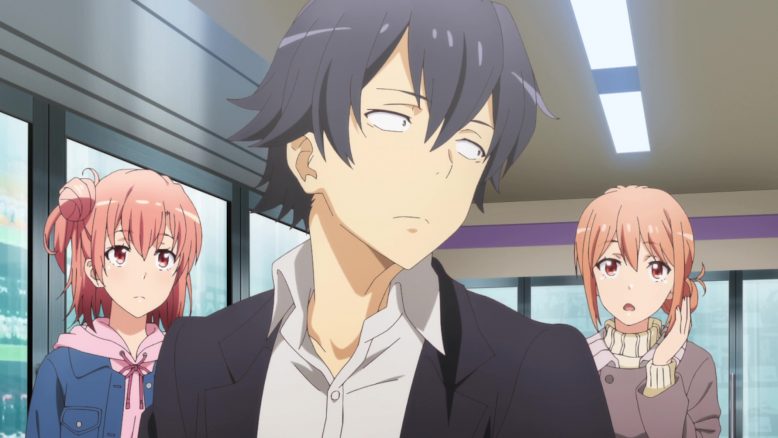 Maybe its because I’ve been in a relatable situation before, but I could really see that the rough situation that Hachiman was in, seeing his friends drift away from one another. I’ve been there, and I can say that it largely felt the way I saw it portrayed in Yahari Kan this week. Even things like the third years graduating happening in parallel to all the other rough stuff, it all just lends more authenticity to what’s being presented here.

When life is tough, and some major issue is plaguing you and those close to you, the rest of the world doesn’t just stop. No, things progress, people move on, and life as a whole will push forward. Seeing that play out slowly, as Hachiman still tries his best to resolve the situation between himself, Yui and Yukino? Its quite a powerful bit of storytelling.

It also, incidentally, lends even more credence to the fact that we’re heading towards a sad ending here. That sense of melancholy, avoidance and defeatism that I see from the main trio? It means that these kids aren’t going to be close friends for much longer. Yukino has more or less thrown the towel, and is effectively trying to cut away from her two friends. 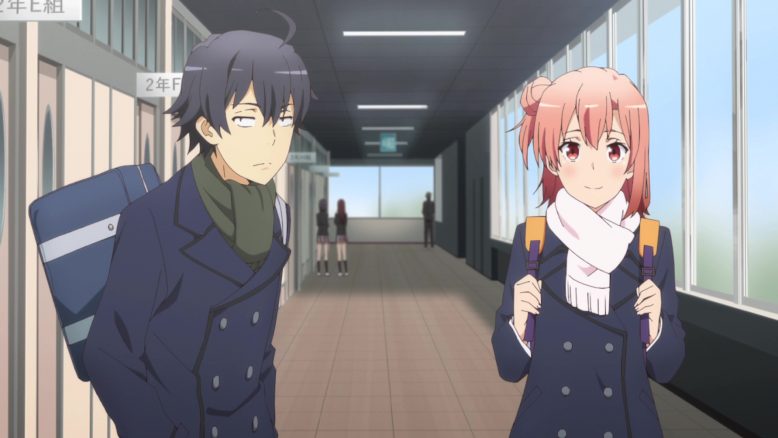 As much as Yui and Hachiman want to fight that, it just doesn’t seem to be something that Yukino’s capable of. It takes serious emotional and mental strength to remain friends after a weird thing happens within a group. When its a love triangle? And feelings of this degree are involved? Well… I can’t see someone as emotionally weak and reclusive as Yukino being able to power through it.

Which of course, leaves us with Hachiman and Yui. As of this week, it was clear that even Hachiman has kind of accepted defeat, content to follow Yukino’s scenario of just giving Yui what she wants. And Yui? Man, she’s in perhaps the toughest spot of all.

I mean, sure, she likes Hachiman and potentially wants to be with him. There’s serious chemistry there, and while its not exactly completely natural yet, there’s a spark that can certainly be developed into a full-on flame. The problem is, however, that the basis for a relationship can’t be something this depressing. Yukino can’t just cut and run like this, because the other two people will simply feel a sense of guilt that will hang over their relationship. 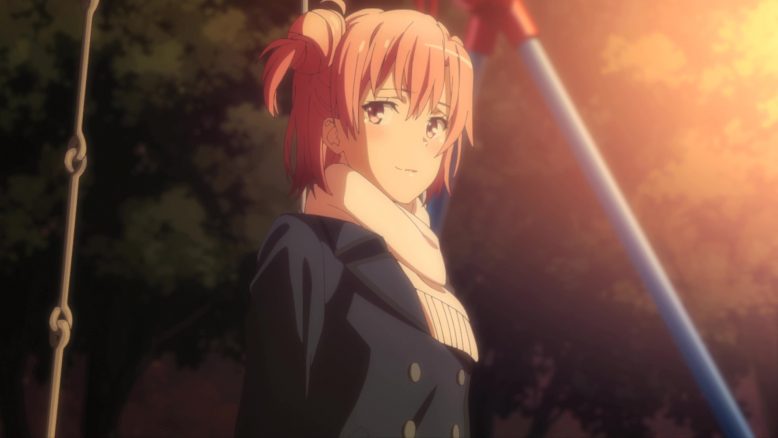 Maybe that’s unavoidable, but I do believe it depends on the people involved. So… Given all of that, what is Yui Yuigahama supposed to? Well… She kind of just… Stalls for time this week. I think Yui is hoping that some how, some way, things will work out for the better. She has her “wish” to use, and how she uses that will ultimately determine the ending she and her friends come to. Her two friends are being exceedingly selfish though, and are basically throwing the decision of what they should all do, on her.

Its cheap, its messed up, and its what teenagers do. I sympathize with all of them here. Yukino can’t handle remaining friends with the other two, so she has to remove herself from the equation. Hachiman, for his part, wants to resolve this properly, but Yukino is not only, not ready for that, but is actively asking that she be left OUT of the decision and discussion. Ultimately, if Hachiman is to respect everyone’s wishes, he has to leave it to Yui, as unfair as that is.

And all of that, is why this episode of Yahari Kan is both impressive, and exceedingly draining. The reality and emotion that’s dripping from this episode is intense, and if you care about these characters, its hard not to feel the hurt. 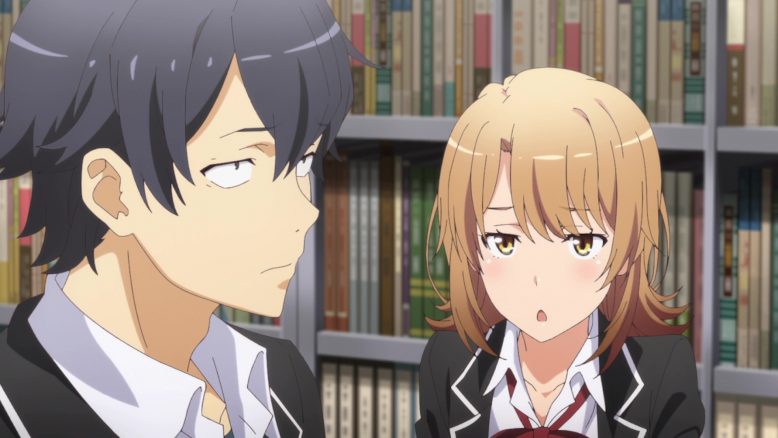 Where is this going from here? I assume we’re heading towards one final spark that resolves it all. Yui has tabled her response to it all to until after the prom, and it seems like Iroha has one final thing to ask of Hachiman before this all over.

For better or worse, it seems like the prom is going to lead to a big moment that may very well push this entire mess into a resolution. Again, its messy, its rough and its also what a lot of people experience in their teenage. If Watari-sensei’s end goal here is to just illustrate the frailness and the bittersweet nature of this particular time of one’s youth, then I think that’s admirable.

Its admirable, yes, but… I will also say, that I’m hoping for more. Yahari has always been unique because of how odd and off quilter its world view has been. I sincerely hope that this story amounts to something a bit more new and interesting than just another “coming of age” story for a bunch of high school kids. Maybe that’s an unfair expectation, but in the end… The heart wants what it wants.