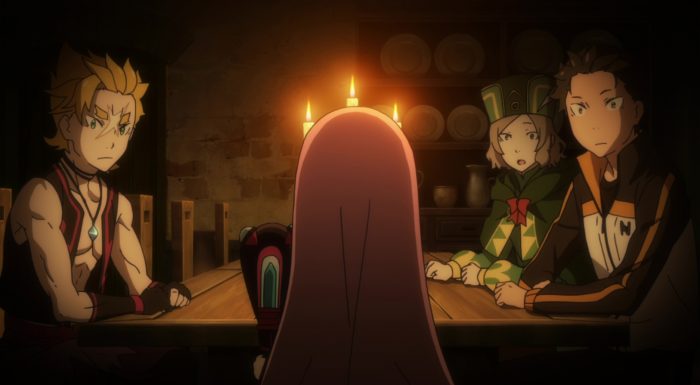 Here we go again. As we approach the midway point of part one, Re:Zero 2 is finally settling into old but welcome habits. The detours and character building were great, but this, this is what fans expected, and dare I say wanted from this show. The sudden twists, the dark turns, and the very real and impossible odds that the show’s main character has to deal with. Re:Zero may have been firing on all cylinders from the get go, but it was this week that the show truly dove back into the familiar that made it so interesting in the first place.

There’s actually quite a bit to talk about with this series, and this week’s episode is no exception. A lot happens this week, all deserving of examination and pondering, to say the least. What’s most impressive to me, however, is how deep and intricate the situation is this time, despite what I’d call minimal setup. Yes, we got a bit more depth to Subaru over the past few episodes, but every other character that has a stake in what’s going on, has more or less been left untouched this season.

Instead of Re:Zero’s usual pattern of spending a good deal of time developing each and every character, what this season is doing, is leveraging everything that came before. Roswal, Betty, The villagers of Arlam and Emilia, all of these characters already have their backstories set and are ready for this latest story arc. A story arc, that, honestly is really bringing everyone and everything together quite beautifully. 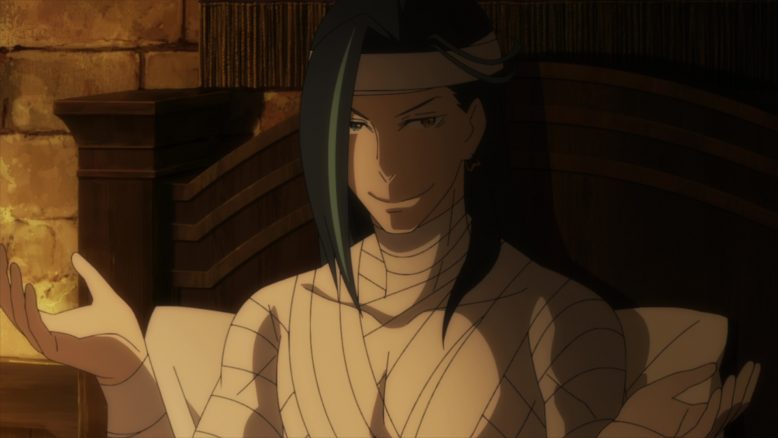 The first of the parties that I think is worth talking about, is Roswaal. Now, Roswaal is certainly an interesting one, in that we’ve seen him probably the least in the series’ runtime, yet he’s certainly a major impact on events nonetheless. Roswaal is Emilia’s caretaker, yeah, but he’s also one of the more powerful entities in this particular universe. Subaru, rightly, begins to question Roswaal when finally given the chance to talk to the man, but the whole questioning devolves into one big rant instead.

I get where Subaru’s coming from, of course. Subaru thinks that if Roswaal had been around when everything went down last season, that he wouldn’t have had to suffer as much as he did. Not only that, but lots of characters would’ve survived, and Rem would be unharmed. Yet, for all his bickering and anger, even he understands what Roswaal is doing here, at least partly. Roswaal’s playing Kingmaker here, setting up Emilia to become the ruler, even if it is for his own gains. To that end, he’ll position and use everyone and anyone. The problem, of course, is that that particular approach doesn’t necessarily have what’s in Emilia’s best interest, let alone those around her.

To make matters worse, I think Subaru didn’t quite catch on to what Roswaal was saying when he called Subaru his “partner in crime”. Roswaal, it seems, doesn’t actually believe that Emilia is the strongest of the candidates, nor that she may be fit to lead. No, unfortunately for Emilia, she’s nothing more than a pawn that Roswaal wants to prop up, no matter what it takes. Which, essentially is at odds with Subaru’s more pure adoration and support of Emilia. Subaru believes in Emilia, in a pure and honest way that also borders a bit on the naive. 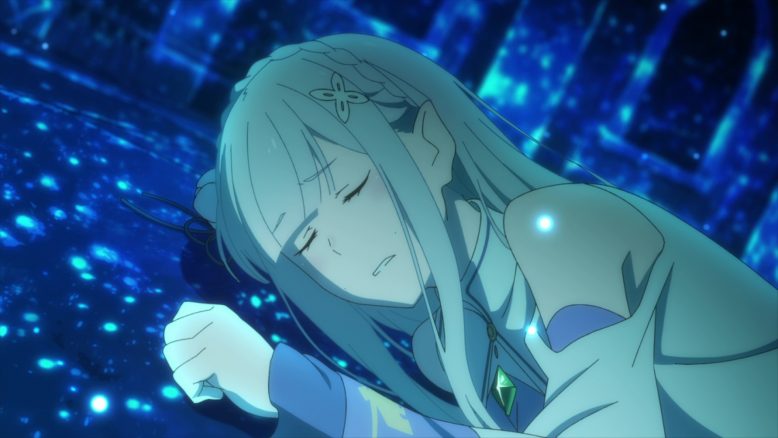 If it sounds like I’m being overly harsh on Emilia, its because I kind of am. Emilia honestly, from what we’ve seen of her throughout the series thus far, hasn’t really projected herself as someone strong and capable. Subaru actually does save her more often than even she realizes, and she herself has accomplished very little. She’s a kind and earnest soul sure, but I don’t think she has what it takes to be a ruler. Nothing makes that more evident then how she repeatedly fails at and fears the Trial of the Sanctuary.

Emilia can’t confront her past, and as she continues to fail and break down, everyone around her is starting to realize that she may not be as capable as she needs to be. Subaru, on the other hand, for whatever his reasons, is able to come through, time and time again. Thus, everyone’s expectations, whether its Roswaal or even Garfiel, lie with him now.

I do think that eventually, Subaru is going to have to realize that Emilia isn’t cut out for the tough stuff, and that she’ll need a bit more coddling than he realizes. I’m sure Subaru will do it though, mostly  because he cares about her as much as he does. For now, however, Subaru’s pretty much locked himself in a support role and its there that he runs into what will probably this latest arc’s big challenges. 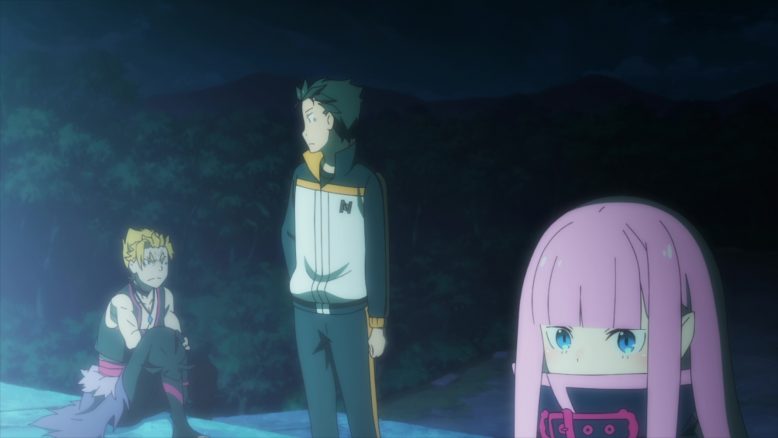 For one, it seems like nearly everyone around him has some sort of hidden agenda. Ram lets it be known that even the Halflings living in the Sanctuary don’t all want to leave it, which in turn, means that there are competing factions at play here. To make matters worse, Fredrica, who I could smell the stink from a mile away, seems to have her own agenda as well. And if all of that weren’t enough, well, when Subaru finally manages to bring the villagers out of the sanctuary, and return to Roswaal’s mansion, he comes face to face with none other than his own innards… torn and split all over the floor.

I have to say, I didn’t expect Elsa to make a return this soon, even if the OP did hint at it. I had thought that she was just one of the members of the Witch Cult, kind of being paraded along with the rest. The fact that she’s now not only made it to Roswaal’s mansion, but also come face to face with Subaru, is a rather surprising and grim turn of events. Subaru was able to take down Elsa last time due to Reinhard’s help, and there’s no Reinhard or really any ally around this time.

Subaru has to face Elsa by himself, and he ultimately also has to get to the mansion faster (next time), because Rem and potentially all the other residents of the mansion are at risk. The stakes and situation are back up to 11 now, and it’ll be interesting to see what Subaru does in order to deal with these new found challenges. 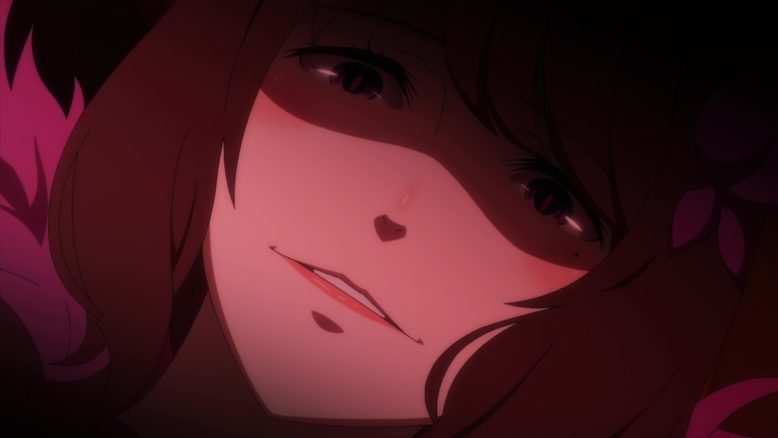 There’s also, of course, the topic of Fredrica, Petra and Betty. Petra may very well be a hostage in this situation, while Betty it seems, may hold some key to the trial of the Sanctuary. The fact that Roswal told Subaru (via Ram) to have Beatrice ask the “question” seems to hint at the next of the Trial’s three questions residing with her. What exactly is Betty’s relationship to the Trial, to Echidna and perhaps even the magic cult? Man, am I dying to find out.

And lets not forget Roswaal and his strange faith in Subaru. See, I agree with what Subaru says, its just too much of a gamble to rely on Subaru to protect Roswaal’s biggest asset. Yet, Roswal does leave everything to Subaru, and Subaru prevails. So the question is, how much, does Roswaal know? Is he, like Betty, able to detect Satella’s “smell” on Subaru? Can he also retain his memories after every one of Subaru’s “Return from Death” resets? Its certainly curious, but its obvious that Roswaal knows a lot more about Subaru than he’s letting on. Complexity upon layers of complexity, indeed.

Which, incidentally and even ultimately, is a fantastic sign for what’s to come with Re:Zero. The mystery is pretty darn deep and nothing is for certain. Where the story goes from here, is anyone’s guess, and keeping that element of surprise and intrigue going, is why I think Re:Zero is currently the best airing show this season. 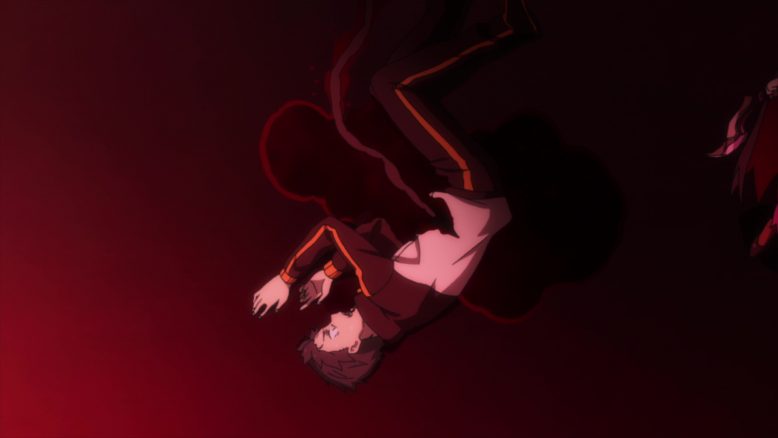 I’ll close by saying that I continue to marvel at how much effort and time is being put into this series. This week was actually one of the rare weeks where we got to see the Opening Credits, but then promptly lost the Ending Credits as a result. The production staff continues to cram as much as humanely possible into every episode, and the result is a show that continues to move at a satisfying, brisk but wholesome pace. I’ve said it before, and I’ll say it again , its just nice to see this kind of a show, especially in the day, age and year that we’re in. Next week can’t come soon enough.