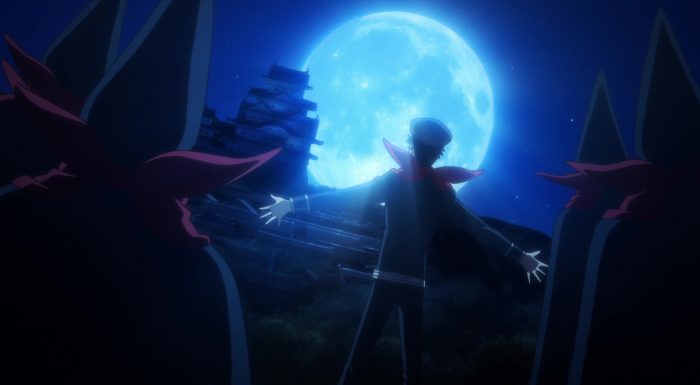 With everything now out in the open, with regards to this final story arc, its hard not to have mixed feelings about the final season of Shokugeki no Soma. On the one hand, there’s certainly some unfinished business to deal with, and its clear that this final arc intends to do just that. On the other hand, its also becoming increasingly clear that Shokugeki no Soma is now a story that’s become fully devoid of any semblance of realism or believability. 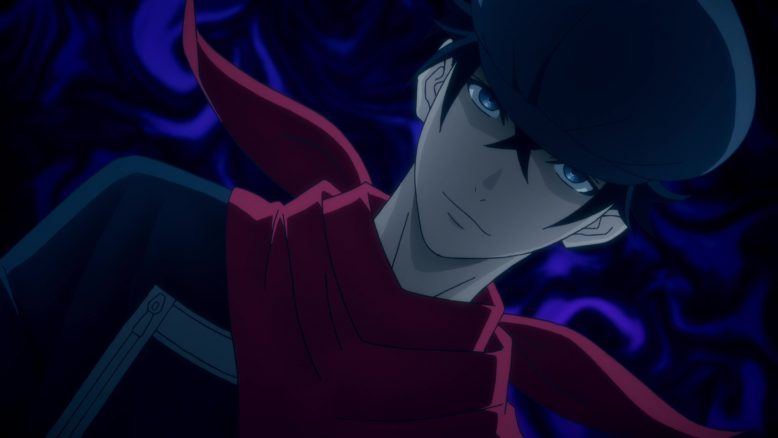 With this latest arc, and its villain Asahi Saiba, the show, story and franchise have just jumped head first into the “over the top, crazy unrealistic” end of the pool. If the Central arc was Shokugeki no Soma basically making the transition from over the topic shounen-ified cooking show to full fledged shounen, then this arc is the Cartoonification or Sentai-ification of the story.

In terms of Shokugeki no Soma, however, I suppose we’re not quite there yet, but we’re extremely, horrifically close. I mean, I didn’t think it possible, but there’s a villain that’s so over the top, mustache twirling-ly cartoonish, that he makes Azami looks like a antagonist with a decent amount of depth. Asahi Saiba and his pointy hat “underground chefs” are just so darn silly and stupid, that they make the entire show look really really childish and well… Stupid. 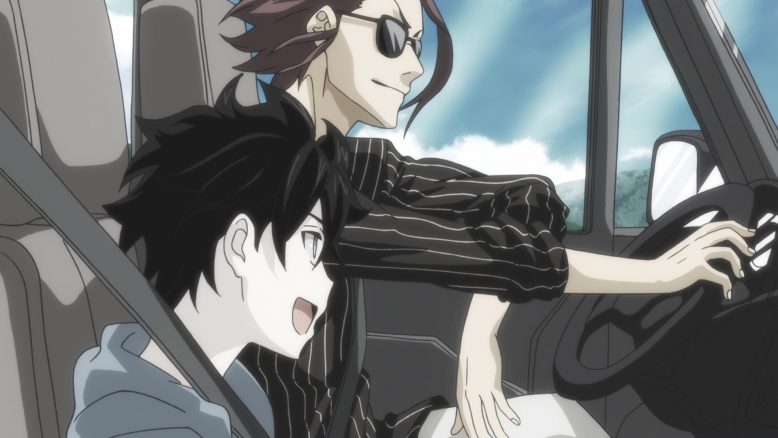 Its not just their looks, but the execution of both the whole Noir organization and Asahi, that make this whole thing so impossible to swallow. I mean, not only is Asahi the “only” student that Joichiro ever took on, but he’s also planning to get Erina to marry him so he can “take over both sides of the culinary world”.

The culinary world? EXCUSE me? Since when did Totsuki and Erina constitute the entirety of the Culinary world. Its when the story pulls stuff like this, that its hard to take anything about it seriously. As awesome as Japan is, and don’t get me wrong, I love the place, its culture and literature, its NOT the center of the world.

The stakes have gotten so astronomically high, that Shokugeki feels tone deaf and extremely self indulgent, in the worst way possible. The fact that the Blue arc is set on the international stage, should be the focus, NOT this stupid underground chef that’s related to Soma’s dad. 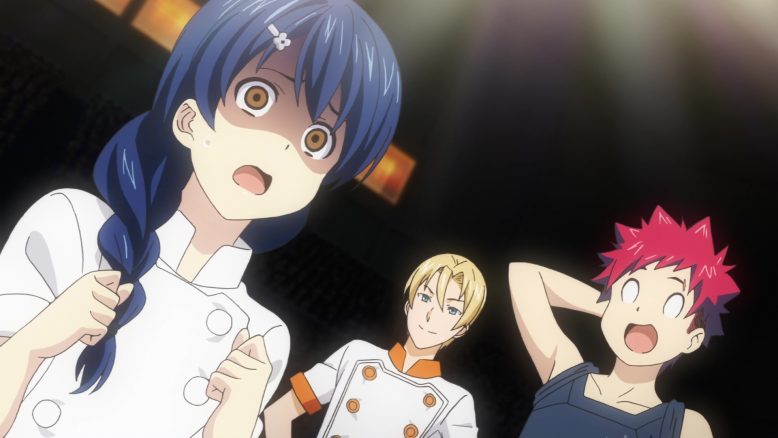 Its hard, because on paper, some of the ideas this arc is throwing at us, are pretty darn interesting. Megumi finally coming into her own, and actually one-upping Soma? Fantastic. The idea of “underground chefs” that serve the seedier parts of society? Clever and interesting. The reveal of Soma’s mother, finally and out of nowhere? Late, but still appreciated.

And yet, instead of doing something that was at least partially within the realm of the believable, Shokugeki no Soma has thrown us a villain that’s so stereotypically “a bad guy” that its actively ruining what should be the final, big encore for the story and its characters.

I still stand behind my assessment that the real ending for this story happened in the Central Arc. At this point, Shokugeki no Soma feels like its almost heading into a sequel story. Go no Sara is certainly not that, but I think this arc just doesn’t look like its setting itself up to finish off the story, even if it is addressing the final bits of unresolved questions that weren’t tackled before. 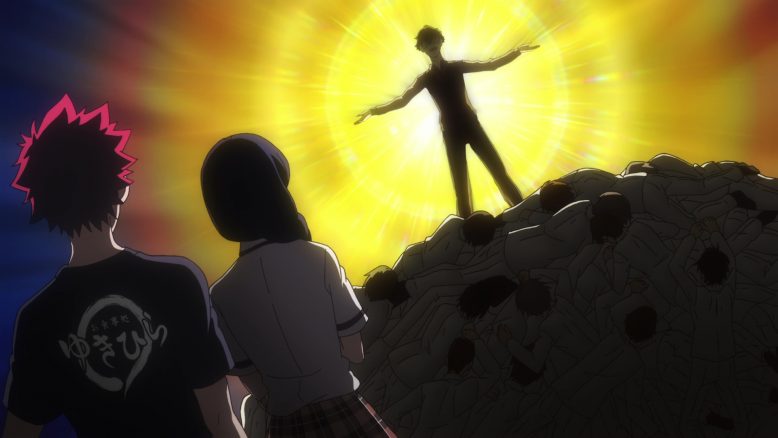 Now, having said all of that, is Shokugeki no Soma – Go no Sara bad? Well, no, I wouldn’t go that far. This isn’t a show that’s unwatchable, nor is it a show that’s a flat out disappointment like say Index III or Fairy Tail’s Final Season. There is still some of the stuff that made this franchise so good, lurking amidst all the misfires and missed execution.

The problem, unfortunately, is that while Go no Sara is “fine”, its just not as good as this franchise and its previous seasons have been, in the past. What we’re getting is a more fantastical, less believable and generic story, albeit with some characters that we really love and adore.

I do want to know more about Soma’s mother, and potentially Erina’s as well. I want to see Megumi and Takumi come into their own (though not necessarily as the couple that the story seems to be angling them towards). And yes, for me, that is surely enough to not only keep watching, but to keep discussing as well. 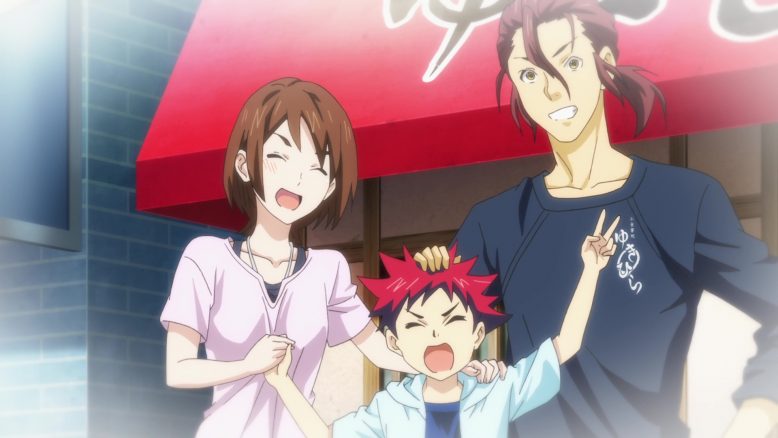 Its not bad, but as a huge fan of this series, I just… Expect more. I should expect more too, because this franchise and its writers have delivered some really amazing stuff in the past. As it stands, Shokugeki no Soma is just losing to ITSELF, which is something that you just don’t see in anime/manga all that often.

So yes, I’ll continue to watch this show, and continue to cover it, but I’m not going to pretend that this even remotely as good as what this franchise has given us before. With those expectations set, I suppose we can continue through this last season of the franchise, and see what final nuggets of info its going to leave us with.