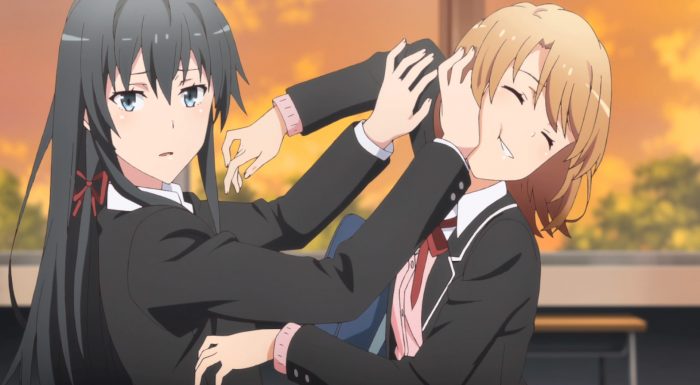 There’s something seriously wrong with this final season of Yahari, and I can’t quite put my finger on what exactly the underlying problem is. The pacing feels off, the show feels devoid of energy or emotion, and everything just feels… Hollow and cold. For a show that’s supposed to provide the “climax” to a three season story, Yahari Ore no Seishun Love Comedy wa Machigatteiru Kan feels pretty underwhelming to say the least. And while this week’s episode wasn’t as tonally sporadic as the season opener, it still felt horribly off, none the less. 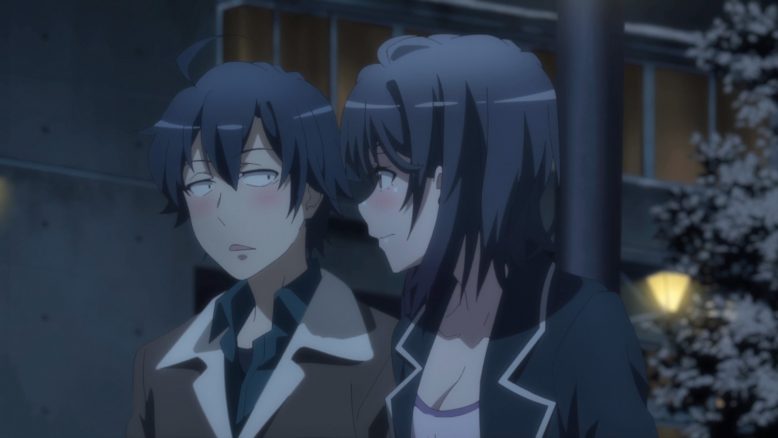 One of the things that I’m immediately noticing and zeroing in on, is Hikigaya Hachiman. Hachiman has always been the draw for this franchise, with both his odd world view and his sarcasm ridden inner monologues. Heck, monologues aside, most of Hachiman’s dialogue is entertaining and unique. It was the thing that carried season 1, the thing that elevated season 2 and the thing that’s almost absent from season 3.

I’m not entirely sure if its the script, or if there’s something wrong with Takuya Eguchi, but the dialogue delivery and general voice acting for Hachiman feels really… Empty. There’s no power or emotion in the delivery, and it just feels quiet, timid and uninterested. Sure Hachiman is an odd ball and socially awkward, but he’s always had the ability to inject some life into his retorts, one liners and pointed jabs. Here? I dunno, I’m just not feeling the performance all that much. And I noticed it a lot more this week, mostly because some of the more glaring issues from the premiere were more or less absent.

I actually went back and played a few episodes from Season 2, and I can see, without a shadow of a doubt, that there’s some serious lack of energy and volume in the dialogue delivery this season. Its noticeable and distracting, because Japanese voice acting is almost never anything less than stellar. I’m not sure if COVID had any effect on the recording, or if Eguchi as a Seiyuu just isn’t that interested in this project, but its almost ruining the Yahari experience as a whole. 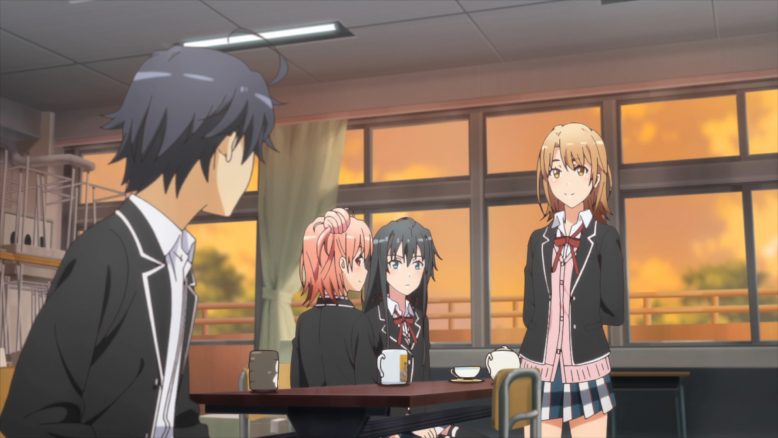 Its also a bit odd, because despite Hachiman being an active participant in all the scenes in this episode, he mostly feels like an observer in the grand scheme of things. This week proceeds with the whole Yukino needs to become independent storyline, and all we get from Hachiman is a bit of grunts, agreements and nods. I’m not sure if our main dude is supposed to be deep in thought and lost at what’s going on, but whatever the case, I feel like Hachiman almost adds nothing to any of the scenes he’s in.

As for Yukino and Yui? Well, I can’t say I’m finding anything too meaningful there either. Yukino is basically trying to do things on her own, and Yui is agonizing over how much her two friends might actually like each other. There’s a semblance of self doubt there, on whether Yui even has a chance with Hachiman herself, and I get that. Its pretty common to feel those things as an adult, let alone a teenager.

The problem here, is that I think its up to Hachiman to decide who he wants to be with. Yui and Yukino are both valid choices here, yet Yui discovering the picture in Yukino’s room, leads me to believe that the show and larger story is angling towards a Hachiman x Yukino ending. Either that, or an ending where all three characters kind of walk their own separate ways. 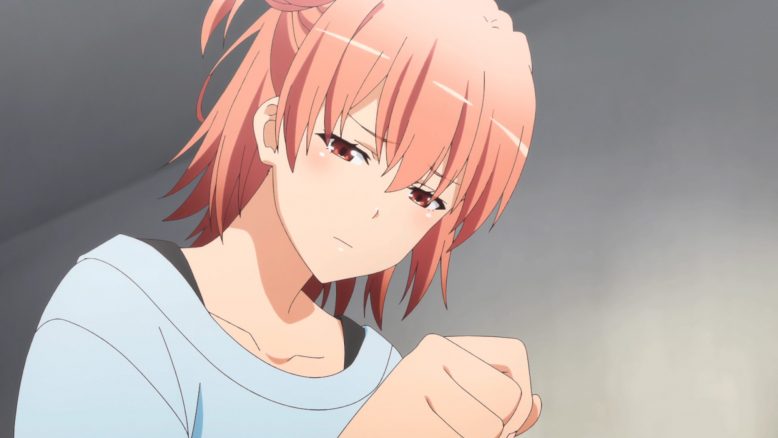 A few years ago, I would’ve screamed from the top of the nearest mountain about how much I’m team Yui, but honestly? I’m not entirely in one particular girl’s camp after I rewatched the series recently. I think they’re both fine choices, and for me, what I want is for the eventual conclusion to make sense and feel earned. Earning an ending is going to require proper build up and laying down a solid foundation.

Which is a funny thing to say, because Iroha’s whole thing that she brings to the Service club this week, is about laying foundations for her future. I’m not entirely sure I follow what’s going on here, but I think this is a good a time as any to point out that some of the translations from last week were a bit “off”, and were circulating on twitter following the episode’s release. Now, its worth noting that I have a passing ability to understand Japanese, and these “Errors” were more of a technical kind, then specifically mistranslating some words. The issue, of course, is that if phrases aren’t properly translated a whole, then the context gets lost.

The lost in translation issue, is something that I suspect is really plaguing this season in particular. I’m not entirely sure how Iroha’s whole “I want to lay the foundation for myself” won over not only Yukino, but the entire service club. My best guess is that Yukino wants to try and lay her own foundations for the future by handling things herself this time, but well… We’ve already seen that entire story play out at the end of season 1. Season 1 had Yukino try to tackle the Cultural Festival by herself, and that turned out, not so great. 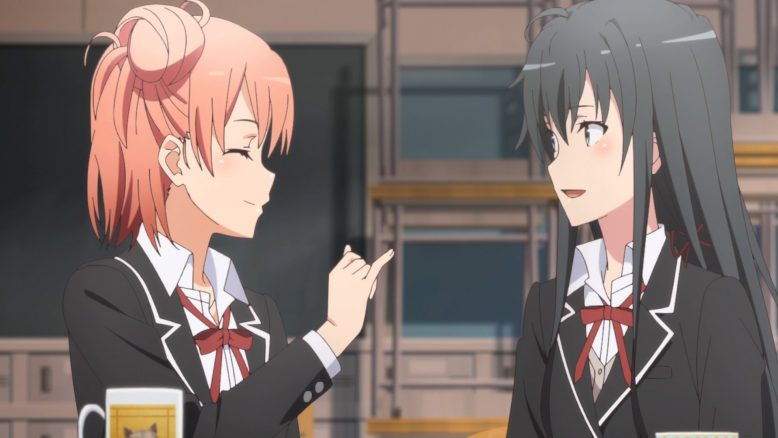 We also had season 2, where Hachiman basically went at things alone, only to realize that he needs to rely on his two friends when he needs to. Why then, does this whole “Yukino wants to do things on her own” idea seem so counter to the larger themes of this story? Well… Probably because it is. At this point, I’m more confused by what direction the story is taking, rather than anything else.

The idea of Iroha trying to setup a Prom, and Yukino helping her by herself, just feels like a weird, zombie repeat of something we saw in season 2 with a different set of characters. While I think it’s certainly interesting to see how Japanese High School students would interpret a Prom, I don’t think Yahari is the series to do it.

The more pressing issues are definitely about Hachiman and the two girls, and I just can’t see this whole Prom thing as a solid vehicle to drive our characters towards some kind of resolution. 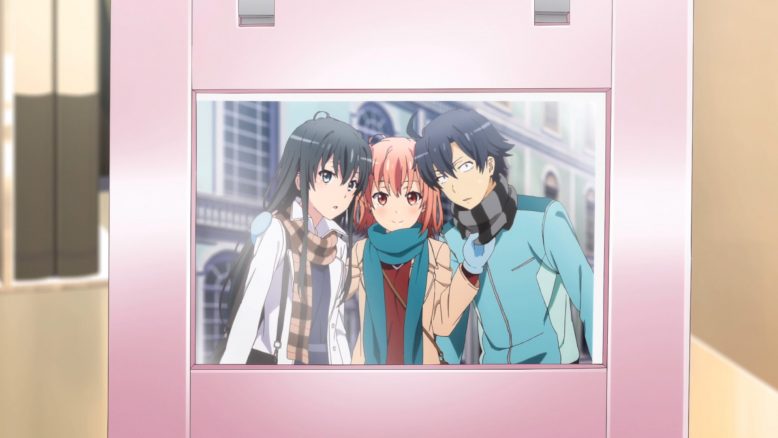 I can’t see it, and everything kind of feels wrong, but I hope that the show is just setting itself up for a massive upset of expectations. I hope that the show improves, both in terms of pacing, voice acting and in terms of the way the story is being told here. I’m hoping for a conclusion that’s worth it, because the journey to get there has, thus far, been pretty rocky and devoid of entertainment.