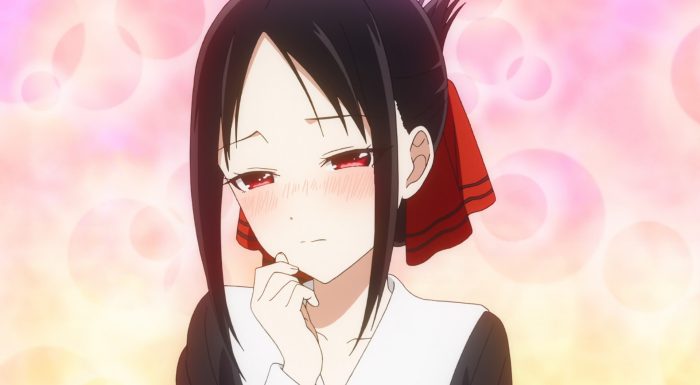 This episode was both silly and nicely advanced the story forward a bit. I’m not sure if I enjoyed the utter hilarity more or the honestly heart-warming scene of Kaguya being a good senpai with Ishigami. This episode had a multitude of good moments and I was pulled into many of them. Of course maybe the comedy works because of the good character moments that make these characters so darn likable. You can have a lot of fun with the antics that Kaguya gets into because of moments of her just interacting really well with Ishigami. Just like how I’m sure Iino is going to get even more likable as she gets additional character moments. Not that she didn’t get her serious background explanation during the election. More moments as we explore her character will only help though. 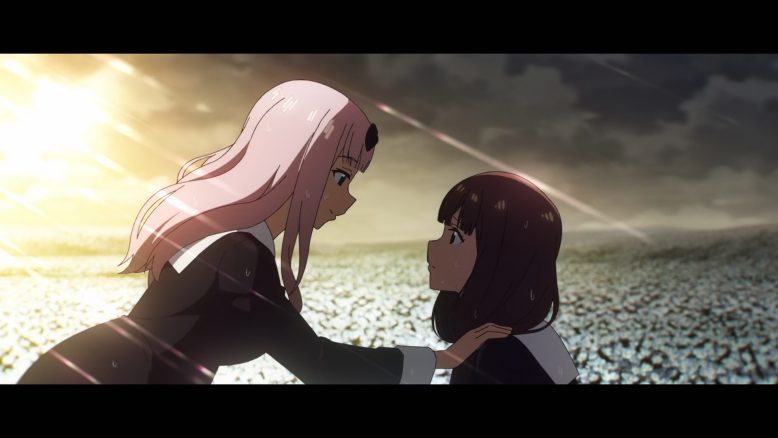 In part I can’t wait for clashes between Iino and Ishigami. Starting from a pretty impressive point where she dislikes him to the point of not even wanting to waste her imagination working him into her silly student council scenario. Of course it is pretty amusing just seeing how she imagined the student council to be. She didn’t even want them to just be good people. But rather she wanted corruption that she could work over through effort, sweat, and tears. A big dramatic story where she was the main character and brought a ‘fresh wind’ to a stale student council. The reality…not exactly as she currently sees it, but not incredibly far off either. That group is pretty crazy.

Of course that also ties into her sense of romance. Her fetish we discovered during the elections and this desire for romance detached from lust. An attachment to a kind of distant love where she received a gift without any attachment to a physical person. For someone with an imagination like Iino…that’s a pretty powerful thing. She can attach this kind of high tier love without ever meeting the person and risking having that love tainted. Not exactly sure what to say about using a parody title of “50 Shades of Grey” though…Is this implying something about Iino or her mystery gift giver? At least the Charlie Brown little skit in the episode was pretty safe. 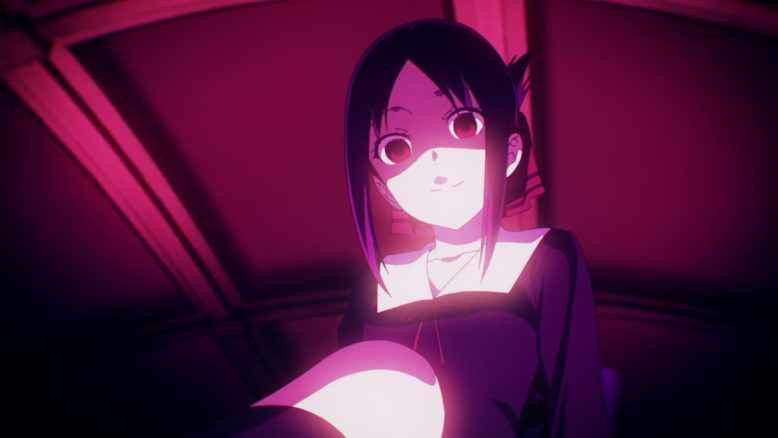 I just had a good and simple laugh of her imagining Kaguya as the source of all evil. Also seriously, her introduction shares a fair number of similarity points to Ishigami. Someone who also saw Kaguya as the source of all evil. Of course he saw her more as an evil serial killer while Iino sees her as a sadist, but there are parallels…It is all the more fun though seeing her completely baffled by Kaguya’s reaction to her questioning. It was such a pure maiden response that the girl is left not knowing what is going on anymore. Though it doesn’t appear that she’s ready to try and quit the student council. At least not yet. Maybe seeing Ishigami crossdressing will spark an entirely new paranoia about the group though. 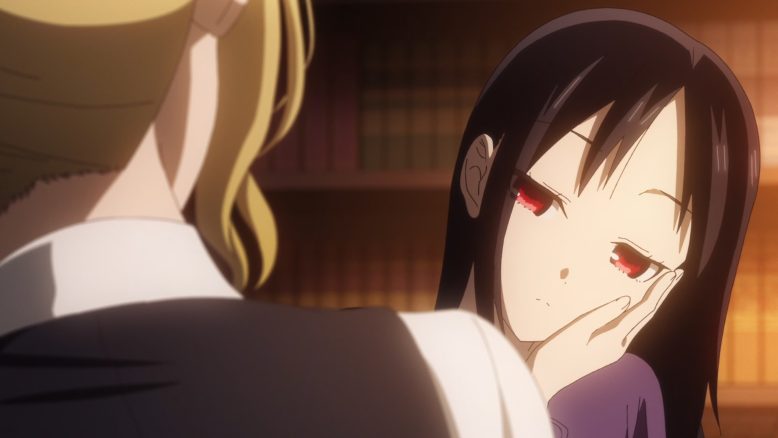 No way could I avoid chuckling at them using Madonna to help Kaguya try and find a ‘routine’ to keep herself calm. That was surprisingly fun. Just having Kaguya doing random posing with I believe the song ‘Vogue’ playing at the same time was gold. Plus there was just nothing else going on in that scene. Just Kaguya doing poses. And yet it was hilarious. Almost a shame that she did eventually find her routine. I’m glad Hayasaka found something like that routine though. Or else Kaguya really would have gone to a neurosurgeon to try and figure out what was wrong with herself…At least this way Kaguya can try to keep advancing forward. Even if she is using that routine like a crutch. On the positive side we got a hilarious fighting game sequence out of this! 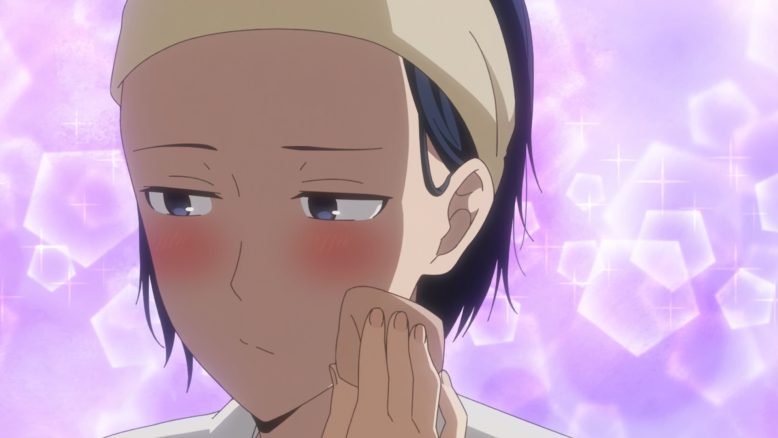 I like the more serious focus on Ishigami. We got a little look at his past before highschool, but only a bit. And really the whole cheering squad thing while coming out of nowhere has an interesting angle to it. This is something Ishigami himself took on in an attempt to change. No one pushed him into doing it. Of course he regretted his decision pretty fast, but at least he’s trying. To be honest I’d be really uneasy in joining that kind of group myself. But at least we can count on him getting something out of this. Since he does stick with it by episode’s end, it’ll be interesting to see where this goes. No one from the main cast is in this with him so it is very much an Ishigami storyline.

Maybe my favorite part of all this though was a very cute scene with Kaguya and Ishigami. Not really leaning anywhere romantic, besides the obvious excitement for him in wearing her uniform. Kaguya really does look out for Ishigami even when she doesn’t need to. And in some ways it makes perfect sense for Kaguya to help him here. She actually does think of him as a good guy all things considered. It is a pretty nice bond they are forming. Heck, even when he without thinking steps on the ‘chest size’ landmine she only lightly pranks him for it. That surprised me in a good way. 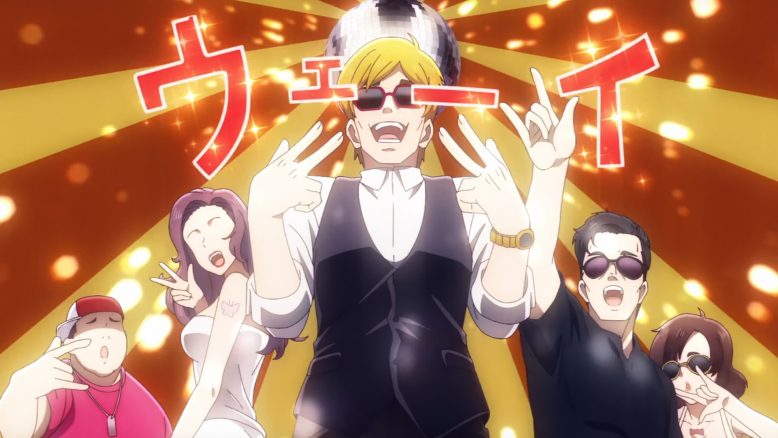 Just another really enjoyable episode. It felt like the show was definitely on point with the comedy and the calm moments. No problems going full blown fighting game at points and then just keeping things simple like with Kaguya’s routine search. Hopefully the remaining episodes of this season keep on being excellent. It would be nice if they have the time to fit in the sports festival they were hinting at here. Maybe end the season on one big event while setting things up for the future.