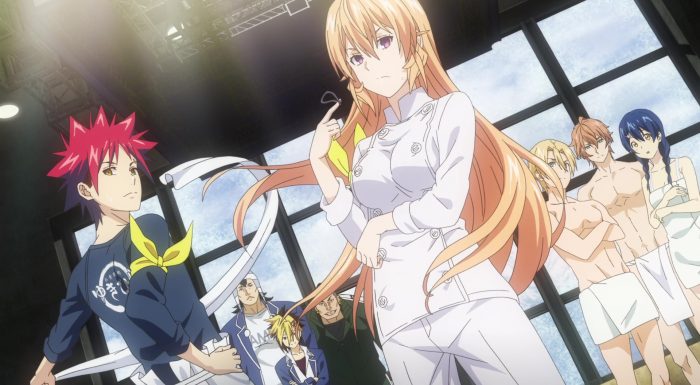 Its been a long time since I’ve done this, so hopefully I’m about to make this all work, decently enough. In all honesty, its been an even longer time since I’ve even wanted to talk or write about an anime episode. The days of my being excited and motivated by an episode enough to write about it, seem like they’re a thing of the past. Feeling like what you have to say isn’t all that important to say at all, is a scary feeling. Its something that I’ve felt throughout this anime season, even as a lot of strong series have continued to air and be watched by many. 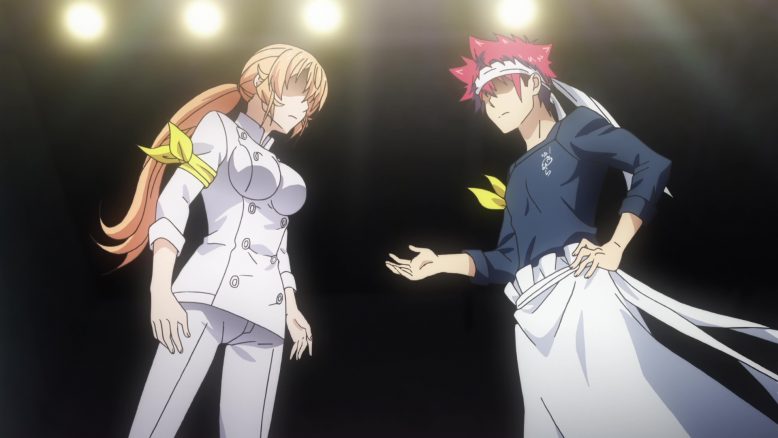 Part of the reason is probably because episode blog readership is just not as big of a thing anymore. Reddit exists, YouTube exists and its in these particular places on the internet, that anime discussion and fandom not only live on, but thrive. In a world and reality like that, it’s really quite difficult to muster the motivation to write and to talk about a show or an anime episode at all. That, combined with the anime industry’s recent penchant for rushing through material and cutting corners on even some of the most popular and established of franchises, has definitely left me a bit tired and burnt out.

Yet, here we are, almost a full cour after Shokugeki no Soma – Shin no Sara started to air, and I find myself drawn towards gushing about this week’s episode. The episode wasn’t perfect, far from it. There were tons of issues with pacing, storytelling and even the overall resolution was pretty generic. As the Central Arc of Shokugeki no Soma comes to a close, I can see why so much of the franchise fandom splintered and left as this arc began. This was Shokugeki no Soma trying to become more of a typical shounen, and I don’t actually believe that it succeeded. 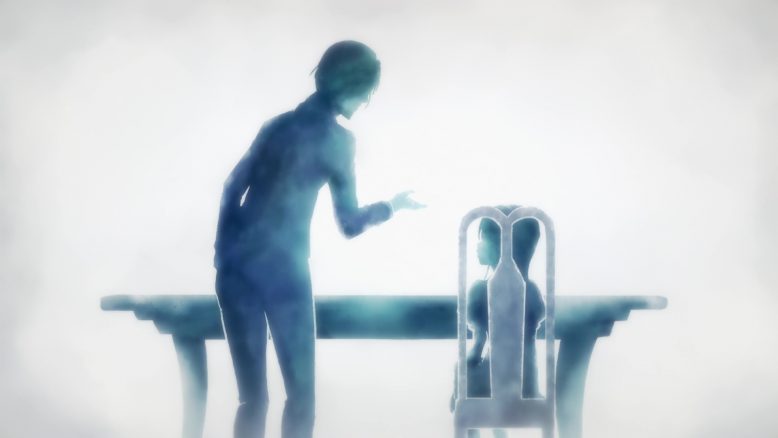 As the show has gone more and more into the realm of the fantastical and the bizarre, its lost some of the power and luster that it used to have as a show and a story based in reality. I still miss the days when the stakes for the show’s cast were a bit more realistic. Soma has to beat a competitor to his Diner’s shopping district. The kids are trying to beat everyone else at a campus food festival, or of course, when the students are trying to survive their first internships at five star restaurants.

The switch from that to something more fantastical like Erina’s crazy vampire dad trying to take over the entire culinary world, was definitely a bit out there. It ultimately doesn’t work, I think, because its just such a tonal shift for a show that’s had one foot firmly planted in reality. 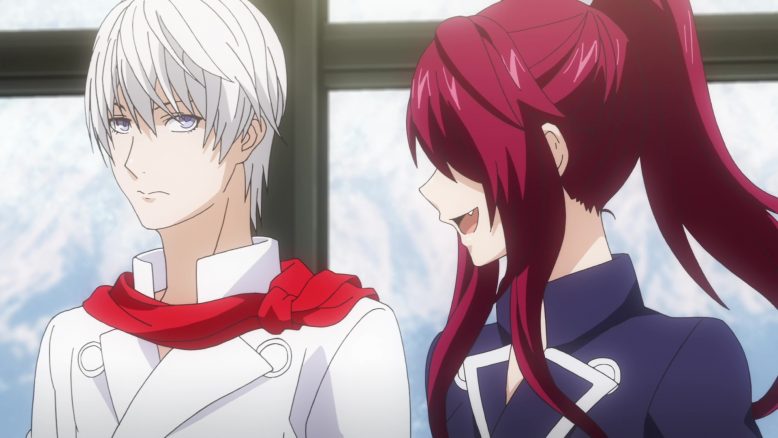 And look, I say all of that, but this episode is graded at an A-, and I most certainly enjoyed it enough to write this post about it. So what gives, exactly?

Well… To be quite honest with you, I just felt the passion in this story, however rough it may have been. This episode is a good episode INSPITE of the issues that this season of the franchise has had, and that this Central Arc has had. Erina’s coming of age, was properly built up throughout the show’s rather long runtime. This episode called back to the best parts of the show, and it really did layer and layer on top of everything that had come before it. 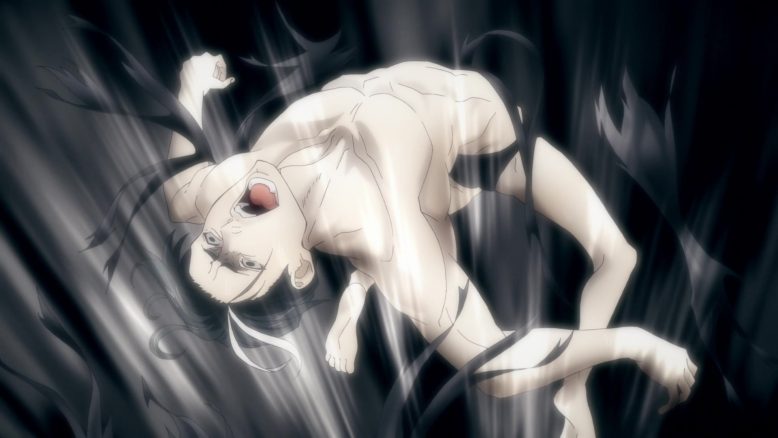 While Azami as an  antagonist and a reason to drive Erina to evolve doesn’t really work, its still impressive that the actual evolution is every bit as exciting and satisfying as it is. I don’t think everyone will be able to appreciate this particular fact, especially when the overall situation is not as palatable. Yet, for me, I think this episode worked, and it delivered on everything that the show has been building up to since it introduced Erina, and then began to focus on her proper with the Central Arc.

The general idea here is a simple one, i.e How does one go about creating truly imaginative and ground breaking art? Does one stay in the neat and cool box of convention, or does one go crazy and try to challenge general wisdom and rational thought and create something truly unexpected? That’s the question being asked here, and its a solid question that the show manages to ask in this rather convoluted premise. 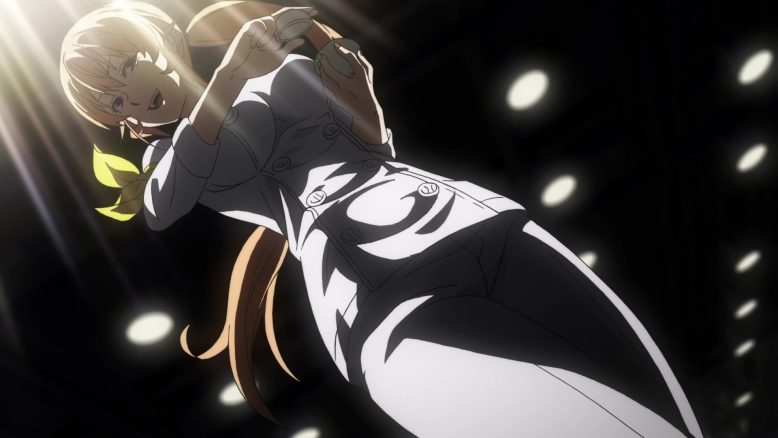 But I think a lot of shows are good at asking interesting questions, and rarely do they provide interesting answers. And in Shokukgei’s case, the answer isn’t exactly revolutionary per say, but it is a solid opinion that’s presented well enough. Erina going away from her set standards and trying to challenge the very idea of what makes a good dish, is something that really helps the character grow. Her experiences with everyone in the cast, and in particular, Soma himself, are what lead to this evolution.

This entire episode? Its just solid stuff. Soma pushing Erina to go beyond herself, to exceed everyone and everything? That is an amazing moment to behold and its something that elevates Soma’s own character and protagonist status. Soma is at this point a true visionary and leader, and he really does bring out the best in the people around him, in his own weird way. 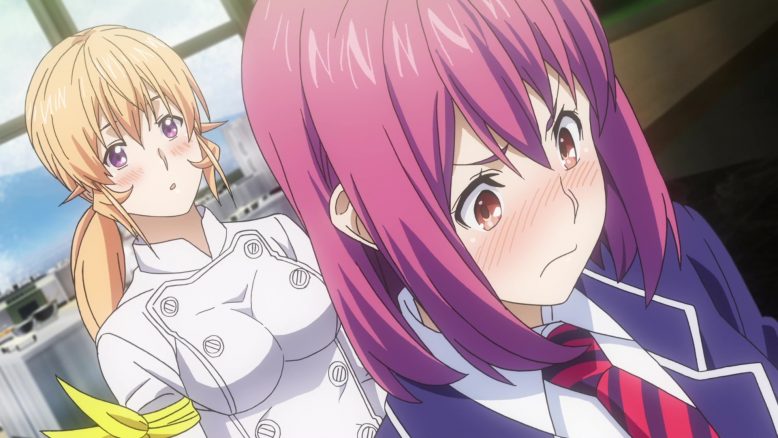 And its that sentiment, of friendship, rivalry and even love that elevates this episode past what it probably should be viewed as. The storytelling and plot work may be sloppy, the pacing may be rushed, but the gist of the idea is intact, and boy is it powerful.

Now, while this episode by itself definitely delivers, in the same fashion that I think Fairy Tail’s Final episode also did, I do think this goes a step farther in some ways, and excites for the future. Where exactly does the story go from here? It feels like Shokugeki no Soma as a story has more or less wrapped up. All the major conflicts that each character has, have more or less been dealt with. 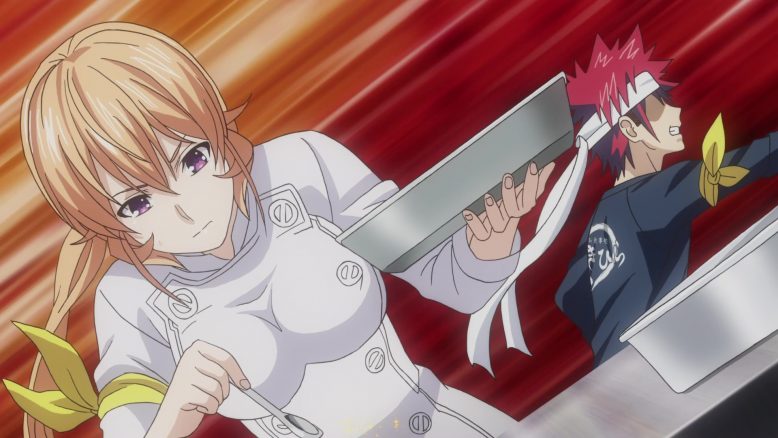 Every major character has grown in this arc, and I honestly feel kind of satisfied with where we’re ending up. Yes there are questions, like how far Soma will go, and who he will end up with and all that stuff, but I honestly don’t think that this is the series to give us those kind of answers. That’s never been what the series as a whole has been about. The show has, honestly, been about cooking and what it means to cook.

The central conflict has been that of Erina vs Soma, and till the end, we as an audience have rooted for Soma’s view point of freedom and challenging one’s self and conventional wisdom. With this episode, Erina finally joins Soma’s side and comes out of the shell that expectations of her family and society had trapped her in. Its a fun and glorious moment, and its one of the more memorable moments that this show has produced in long darn while. 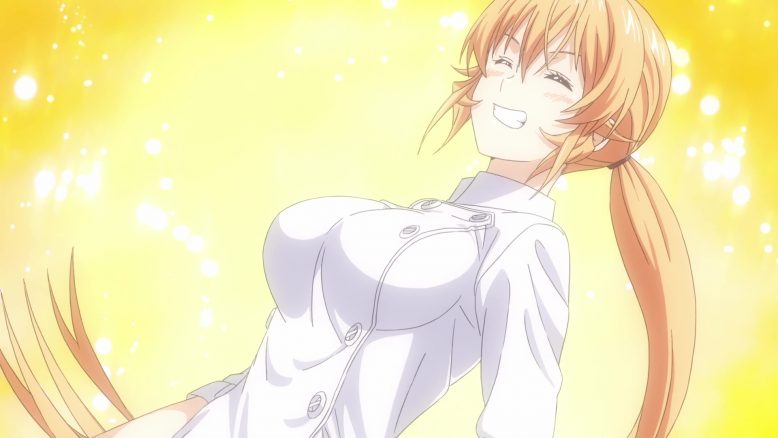 The last time I enjoyed an episode as much was during the Stagiere a couple of seasons ago. Sure the Moon Festival arc is probably my favorite one of the manga thus far, but the anime butchered that pretty badly.

In the end, I guess I’m writing this post because Shokugeki no Soma demanded it from me, with how splendid this episode was. I’ve been long thinking about what the future is for Anime Evo, and for myself as a episode blogger/writer about anime. I’m not entirely sure what the answer is, or what the future holds. I was leaning towards hanging up the keyboard entirely, but this episode definitely gave me pause. 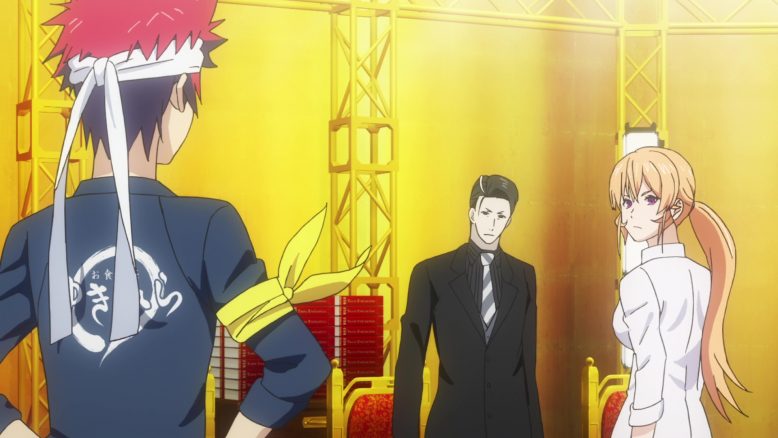 For those wondering, I actually don’t think I’ll go back and cover the remaining episodes. They were fine, some were actually even good, but nothing begged talking about, honestly. So… I think I’m going to do the weird thing, and just cover and talk about what merits talking about. This may very well be my transitioning point away from talking about every episode of a show, and just highlighting some rather noteworthy moments, whenever they happen. That’s the direction I’m thinking of going, and for the rare person that actually reads my thoughts this week, I have two questions for you.

1) What did you think of this week’s episode? Did you enjoy it in the same way I did? Inspite of the show’s flaws?

2) Would you even be interested in reading a regular dose of wider coverage that I mentioned? Would focusing on specific highlight moments in different shows, actually be something of interest to you? 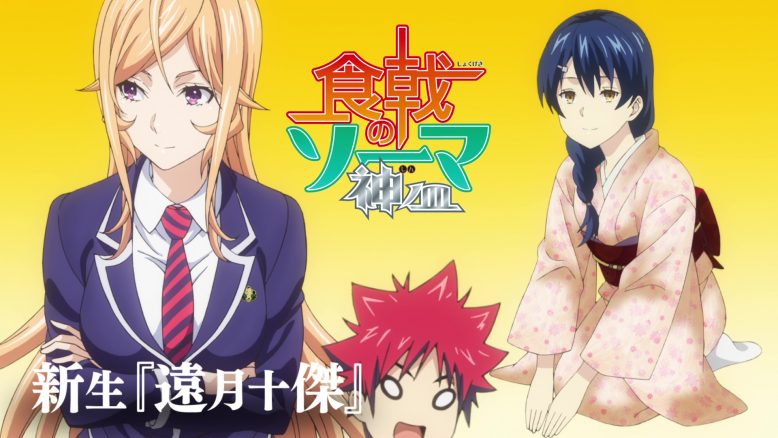 After the end of the episode, as we near the end of the year, I thiink I’m starting to find inspiration in where to go next. Shokugeki no Soma, in one of its more rough but passionate episodes, inspired me to think and go somewhere that I hadn’t planned to or even thought of. If that isn’t the power of the anime medium, and this show, then I don’t know what is.