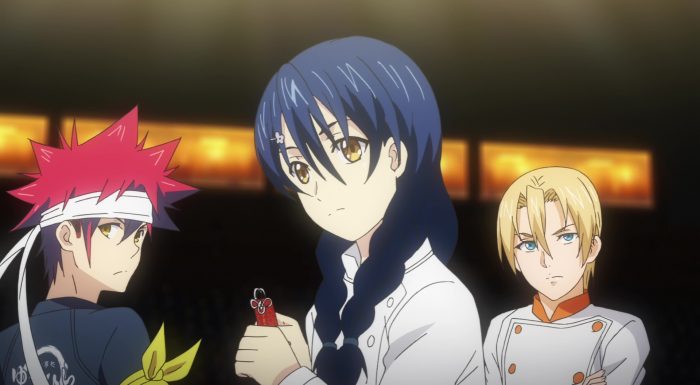 It feels like Shokugeki no Soma Shin no Sara is almost in a recovery-like, rehabilitation phase of sorts. Things are definitely improving week for week, and all of that definitely makes me hopeful. This week’s episode was definitely a lot more engaging. The first half, while predictable, still had some heart and emotion in it, while the second half finally set up things to be truly exciting and interesting.

Did we just need to get through some of the early bits of this Team Shokugeki Story? Perhaps so. It certainly seems like the Shokugeki no Soma that I’ve enjoyed and loved is starting to appear again. Only time will tell if this week’s episode is a sign of things to come, or a mere blip in the larger trajectory of this series. 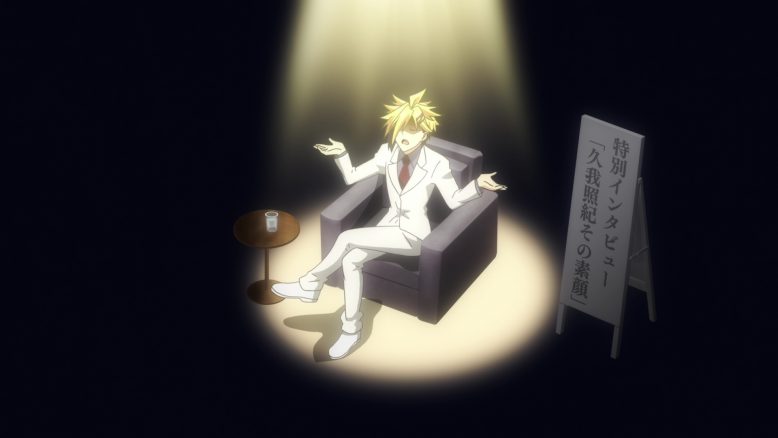 First things first, I will say that I didn’t mind the Tsukasa vs Kuga battle as much as the previous two. Yes, it was obvious that Kuga was going to lose, but Kuga threw in enough curveballs in his approach both last week and this week, to make it all interesting. Plus, I think its safe to say that Kuga is just a good and interesting character. He’s got a nice backstory and a solid motivation behind his whole thing with Tsukasa, for one. For two, he’s pretty darn energetic, fun and just commands a sort of charisma that you only see from characters like Soma himself.

I personally would’ve loved to see Soma and Kuga pair up for some kind of dual Shokugeki, but I guess we’ll just have to wait and see if the story ever shows us something like that. For now, I suppose I have to hand it to both Kuga and the overall story for being a bit realistic here. Kuga and the rest were never going to beat their opponents, so the fact that they knew that and planned to just wear them down, was at least palatable to take. 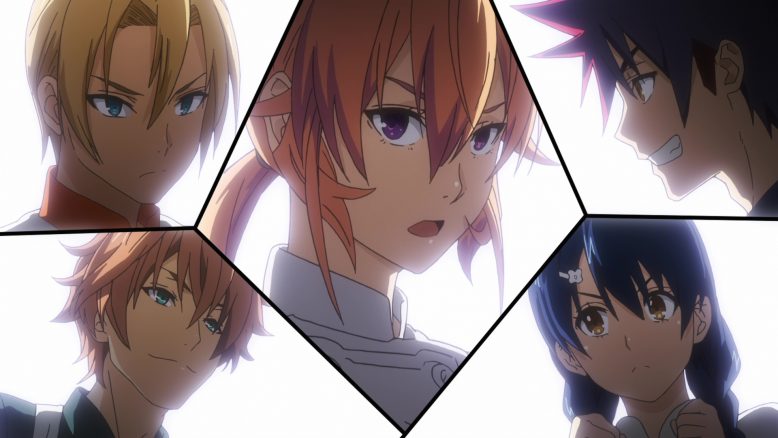 I’m actually impressed that Erina was able to come up with a strategy like that, because it signals both her strengths as a character and her growth. She had to believe in her comrades to be able to plan something like that, and I will say, though I will always be team Megumi, Erina is starting to grow on me a bit. I’m still not sure about her and Soma, but at the very least the story has done a fantastic job of making this rather hateful character quite likeable in both these three episodes and the last season.

Now, while Tsukasa beating Kuga was decent, and the whole wearing down both the first and second seat was clever, what really made things interesting for me, was what came next. Having Soma, Megumi AND Takumi all be the upcoming Shokugeki contestants, was simply put, the shot in the arm that the series needed. Here are three characters that anyone watching this show cares for. And of course, they’re going up against characters that I’d say are powerful, at the very least. 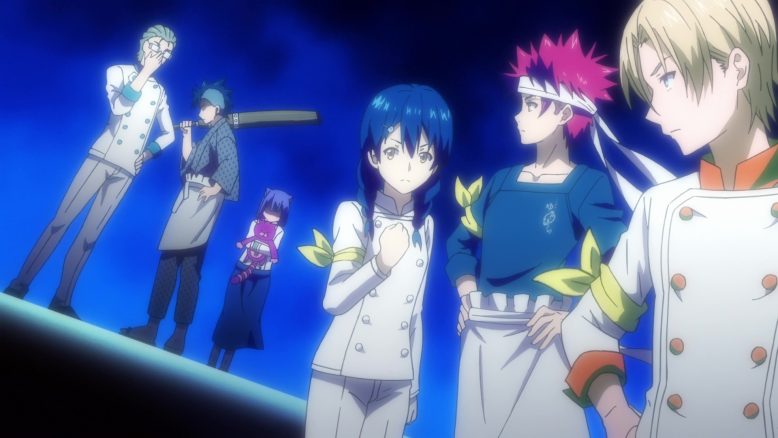 Soma is most certainly a shoe-in to win, but the other two, are less so. I really want both Megumi and Takumi to win, but I can’t say they both will. One of them, at the very least, is going to lose, and as to who that will be? I’m not sure. Takumi is facing off against Eiji, who is pretty bottom tier in terms of villains at this point. Yes, he could end up winning against Takumi, but I feel like Takumi needs at least ONE win in this story, and now might be the time to give it to him, against a foe that everyone would be happy to see lose.

Then there’s Megumi. Megumi is the character that I always root for the most. She’s perhaps the weakest of her friends, but her heart, kindness and perseverance are really a huge part of her charm. Seeing Megumi grow, whenever she does, is perhaps one of the best parts of this franchise and story. One of the things I want to see from this franchise, before its story concludes, is Megumi standing toe to toe with Soma and Erina. 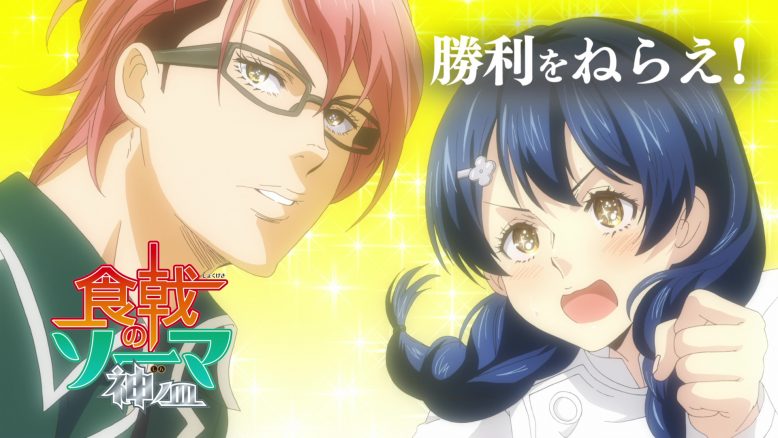 And Maybe that’s asking for too much, but at the very least we can’t have her get short changed. Megumi’s a little bit more important of a character than any of the other supporting cast, and I really hope this show gives her, her due. Heck, if the post credits scene and ending illustration are any indication, then well, the show is setting us up for Megumi’s Shokugeki being one of the main events of this arc.

Which, I think, is a good a place as any for this show to be at. My hype for the three upcoming battles is definitely there, and that’s something I feel I’ve been lacking in this show, ever since we had the Soma vs Hayama battle last season. Having characters to root for, and having the stakes be fairly high? That’s something that this show has needed for a while now. 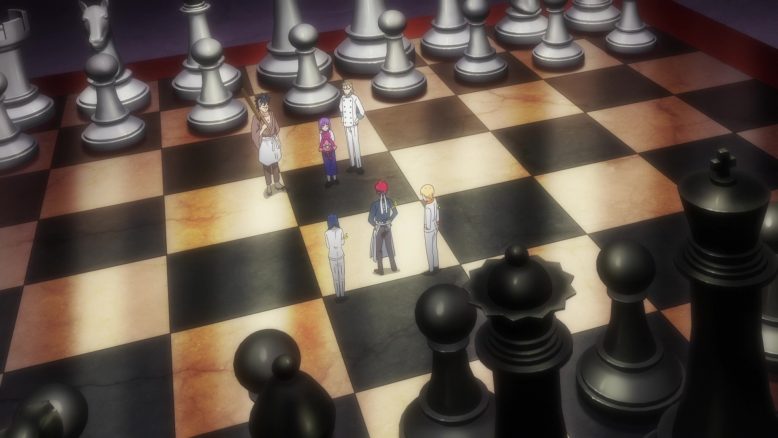 Everything set up for the show to deliver the goods, once again. Here’s hoping it doesn’t bungle it again, whether its due to pacing, or just story decisions as a whole. I suppose we’ll see next week.