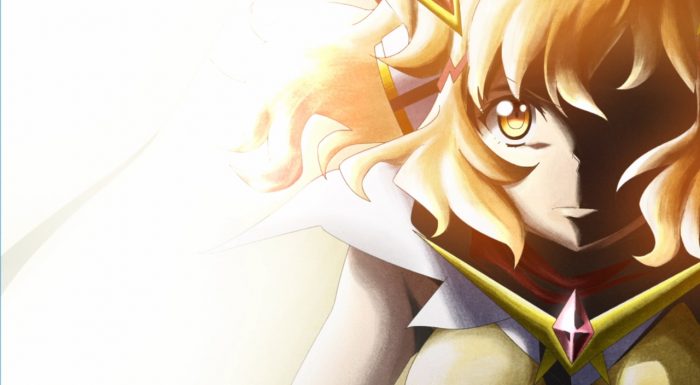 We are one step closer to the end and there is one epic finale coming up. This episode both had a satisfying level of action and threw in enough world building along with it. I can’t help but appreciate the angle of letting humanity unite behind a cause even if they remain divided. That people can cooperate even when they do have differences to overcome is a nice thing to see from humanity. It may be difficult for people to do anything about the nebulous existence of Shem-Ha when she is using the very concept of language to exist. But it is more than possible for people to step up and deal with an attack from their computers and the internet. Or at least it is more plausible for people to step up to deal with that. 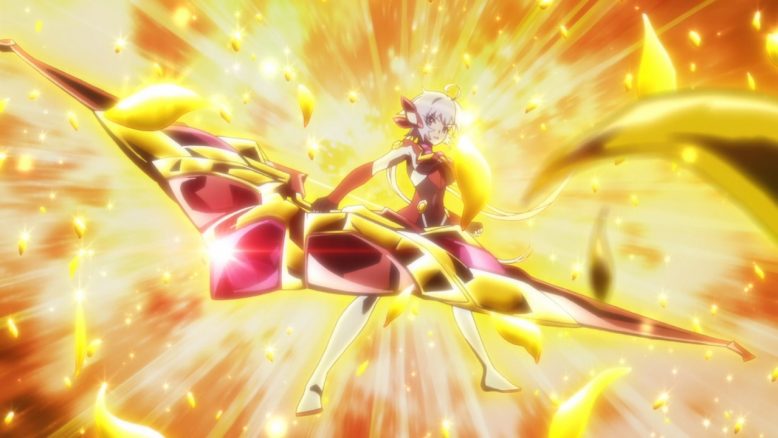 If there was any weakness for this season it was that Chris has taken a step back from the spotlight. But I was always able to accept that because she did get a fair amount of focus in AXZ and these seasons are fairly well connected. But I fully appreciate any focus she gets and this episode did give her some chance to shine. It wasn’t anything as dramatic as a reunion with Fine. But having a place to return home to has been a pretty major part of how Chris has developed throughout the franchise. This was a girl who lost her family and place to live. At points in S1 she was living on the streets. So having her very world being potentially taken away would push her forward. It didn’t hurt either that she faced individuals like the ones in Noble Red.

Chris can at least understand the feelings of being cornered and isolated. And she has been hanging around with Hibiki enough to support what she would want. Saving her enemies is fine in this circumstance. Chris had something to say and it was her one effective little speech in the season. Besides I do like how flexible her Amalgam is. She made perfect use of the reflectors her gear has for the sake of offense instead of defense. Now I would have loved a special song for Chris in this situation. But I do think her battle song this season was nice and I don’t mind hearing it a few extra times. 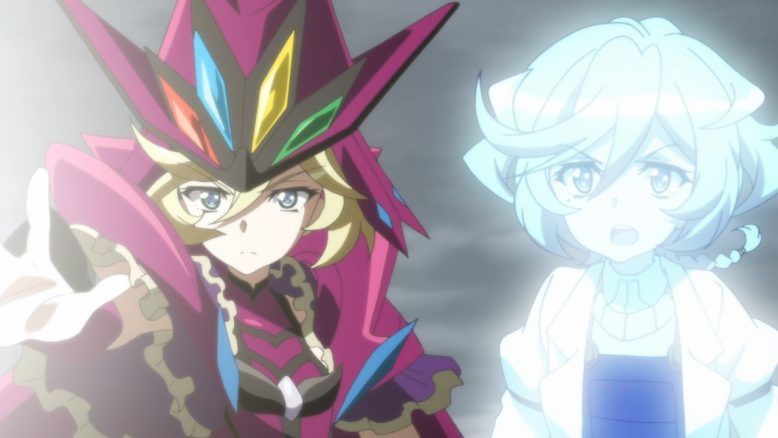 Now I am rather glad that Carol got one more fight. Sure that means that Genjuro didn’t, but this was the proper choice. Carol did have a plan while I think Genjuro was going to act purely from desperation. After all even if he could pick a fight with Shem-Ha it isn’t as if he could deliver a finishing blow. And his tendency to suffer a cheap shot because he is a softy at heart could have proven fatal this time around. Even if Carol’s plan failed, it was a pretty effective plan. I also appreciate the angle of using restraints to limit Shem-Ha. Without god slaying powers you can’t simply beat up Shem-Ha. So Carol just limited her opponent and then tried to remove Shem-Ha. That faust robe got in the way of course. But it was still a solid strategy. 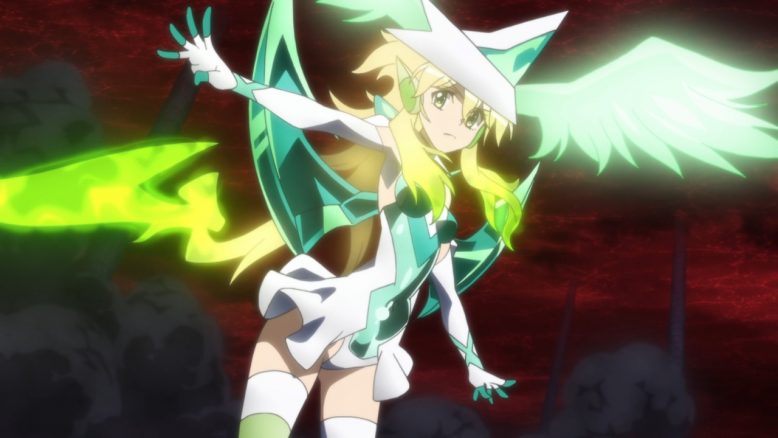 X-Drive is ready to go! I suppose calling them Amalgam X-Drive might fit best, but let’s just keep it simple. These forms are intense though and feel like a “last battle” kind of design. They are straight up glowing this time around and even their hair feels alive or made up of energy. I’m not so sure about how they achieved X-Drive, but I’ll take it. The forms are epic enough that I can stretch my mind to them just hitting X-Drive through pure intense desire. Although triggering them through the song in their hearts does make me wonder if the last episode will have any additional mention of Fine. It just feels appropriate to make another important note or flashback for the villain that just about started everything for this franchise. 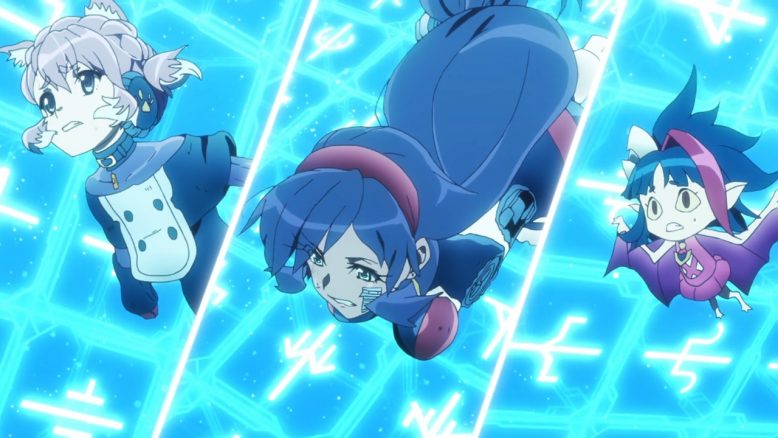 But regardless, we are set for the finale. Noble Red is gone. I suppose some won’t love that they got a kind of noble sacrifice. Certainly Millaarc never deserved such a thing. But they did die and in the process got the main characters back home. And in some ways I appreciate their last moments even more than what we got with Saint Germain’s group. This bunch lived as monsters, but died as humans. You can argue that it is more than they deserved. But even in that case one can be satisfied that they are gone and that their deaths did benefit the main cast. 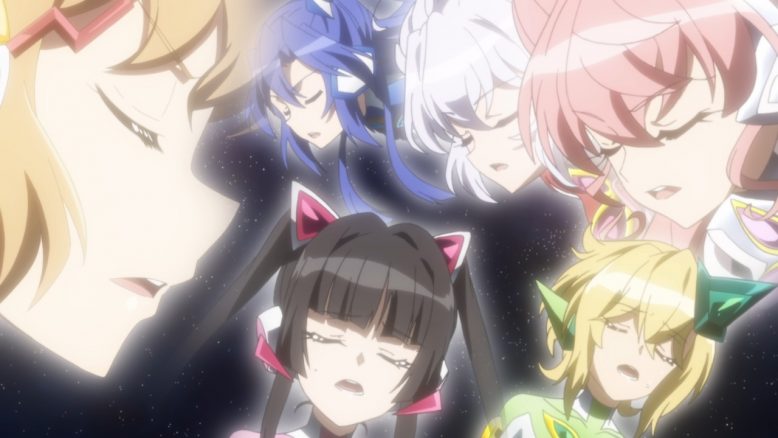 I can’t wait to see the next episode. It is certainly set to be a spectacular showdown. The main cast are as powerful as they have ever been. And yet Shem-Ha is undoubtedly an insane foe. They should hopefully be able to overpower her enough to find an opening to get Miku back. Beyond that though, Shem-Ha is very likely to take action in creating some sort of final form to use instead of Miku’s body. That way even Miku might have the chance to pick a fight and stand with the others. This is the one chance they have to go that far. But no matter what I will say this season has been a true blast. I’ve had such a great time watching and talking about this show. There will be some bittersweet aspects to next week when I have to simply say goodbye to Symphogear.