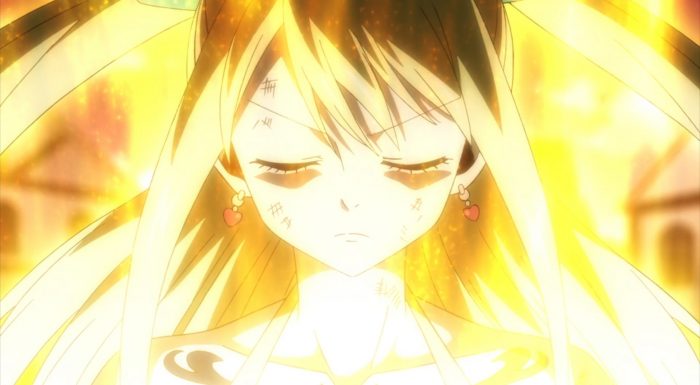 Its an interesting place to be at this week, with Fairy Tail’s Final Season. We’re a mere step away from this show concluding. This is, indeed, the penultimate episode of Fairy Tail The Final Season, and Fairy Tail the anime franchise. Looking back, we’ve discussed Fairy Tail here for dozens upon dozens of weeks, months and heck even years. We’ve seen Fairy Tail grow its audience exponentially over those years, and then we’ve seen it dwindle down to almost nothing in this final season. What do you say, or even talk about, at this particular point in time, to an audience that’s both exceedingly small and probably just as tired and weary as I, myself am? 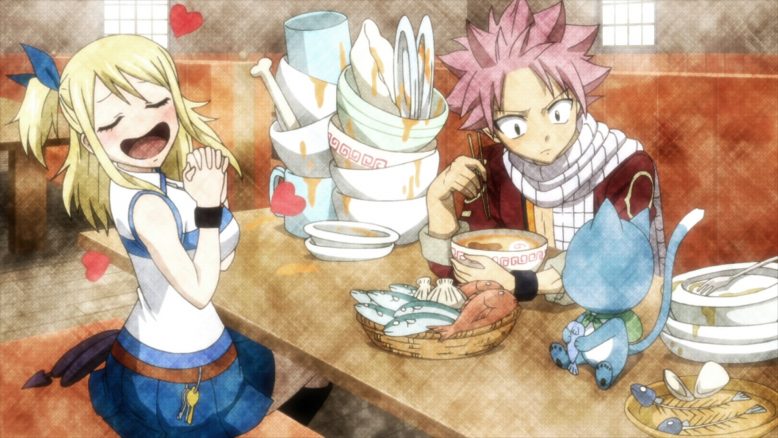 Its a question that I’m not sure I have the answer to really. The way, I think, I want to approach this week is that its almost preparation for what comes next week. I see myself, looking back at this post, when I inevitably attempt to gather my thoughts around this series as a whole. There are many shounen series and anime series that have gone on for a long time, but Fairy Tail was the first and probably will be the last series that I will ever endeavor to cover to such a degree. Covering almost every episode of this show, week by week, has been a fascinating experience that’s dominated a good chunk of my adult life.

And yes, I realize that this isn’t the last episode, but its hard not to get nostalgic and look to the past when this week’s episode itself, did just that and did it pretty darn well. There’s a lot wrong with this Final Season of Fairy Tail, and perhaps even this episode, but the respect and reverence of the past is definitely one thing that it did nail, in its final hour. 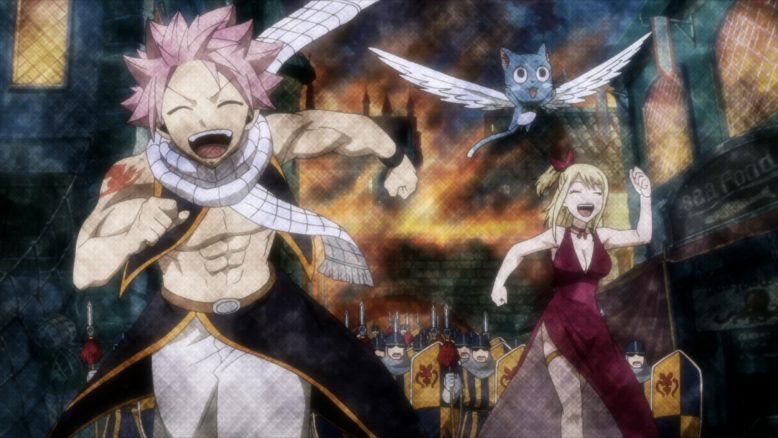 The parts that I think really worked for this episode, were the ones that called out to and celebrated the rich and powerful history of this franchise. Moments like Lucy commenting about how Hargeon Port was where everything really began, or seeing almost the entire extended cast of the franchise join together to tackle their last big problem? That was really really cool to see.

I honestly kind of wish that this self reflection and self celebration had been more of a constant in this Final Season and story arc. If Mashima-sensei knew that this arc wasn’t going to execute on some interesting and novel idea, then I think creating a cross over of sorts that tied every major character of the franchise into an overarching situation, could have worked wonders. It could have been a nice alternative to the jumbled mess we got with Zeref and Alvarest prior to the whole Acnologia stuff. 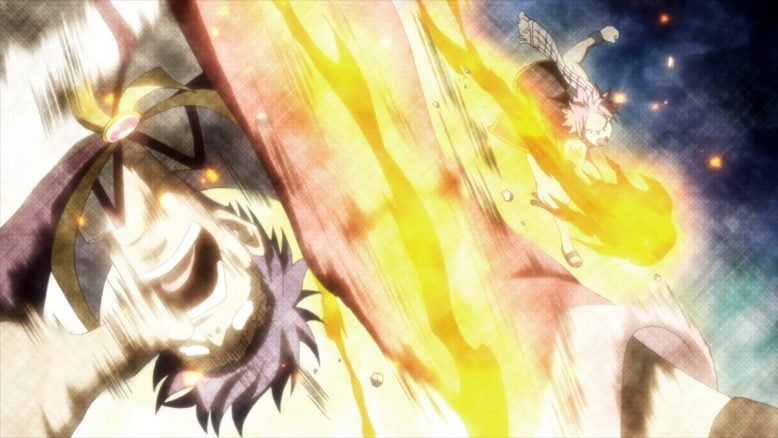 I really do believe, that part of what made this Final Season and Final arc suffer so much, is that it and by extension Mashima-sensei himself, forgot what made everything so special in this franchise in the first place. The twisting, mystery like plot, the emphasis on character arcs and development over hard action and the use of clever and out of the box ideas, is what differentiated Fairy Tail from other shounen series at the time when it first came onto the scene.

Nowadays all shounen shows that are successful, kind of do what Fairy Tail used to, and perhaps to a much greater degree. We have shounen shows like Dr.Stone and Promised Neverland all kind of breaking the mold of what a shounen show can be. Which I think, is why its so tragic to see Fairy Tail devolve into a standard, cliche shounen story with little depth, in its final moments. 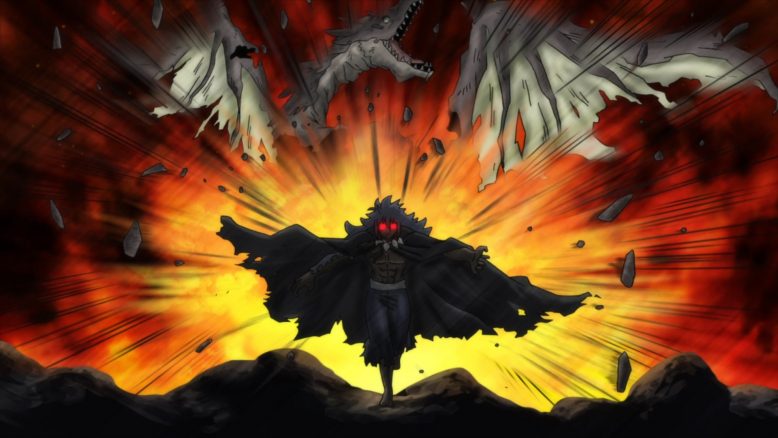 Pathetically developed antagonists, stupid powerups and plot holes, that’s not what I remember about Fairy Tail’s original two series. Fairy Tail was had its flaws, but they never overpowered the overall entertain and experience. There was a care and a love that was just so evident with Fairy Tail, the manga/anime franchise, And yet, its stuff like what we got with Acnologia, that really shows us how far the show has fallen.

Acnologia’s backstory was bad. It was so bad, in fact, that I almost wonder if it would’ve been better, to not have it in there at all. The whole Acnologia wanting to kill all Dragons because his own village was destroyed by one crazy Dragon , is as paper thin of a motivation as you can get. Irene had a similar kind of story, but hers actually added so many layers to both her character and the world of Fairy Tail as a whole. Acnologia wanting to exterminate all Dragons is an idea that just breaks everything we know about him as a character and entity in the larger lore of the franchise. 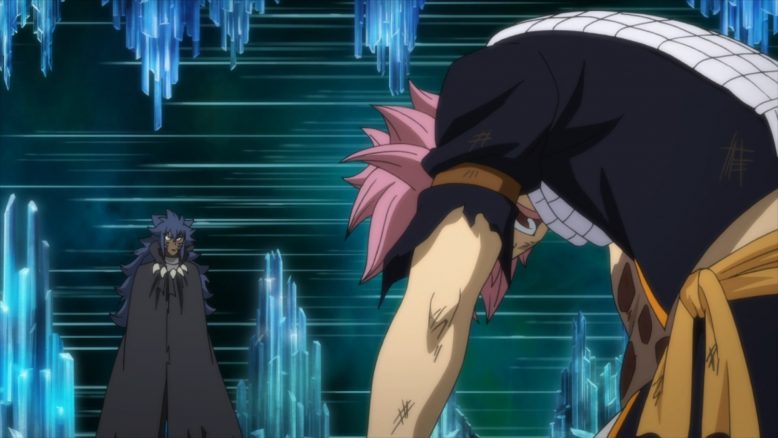 Why is Acnologia trying to kill humans and everything around him, if its the Dragons that he wants to end? Why doesn’t he end himself as well? I mean, Natsu even points out how darn stupid his whole idea really is, and that kind of self deprecation doesn’t actually do the story any favors. It shows the audience, rather, that Mashima-sensei and the anime writing staff both realize just how stupid this all sounds. Their big excuse, in turn, is that Acnologia is just crazy and insane. And man… If that was all we were driving towards here? Then, well… This backstory is a complete waste of space and time.

Look, I get the general idea here. The show is suggesting that Acnologia’s tragic past and his lust for power and vengeance are what ultimately transformed him into the monster that he is now. That’s a swell idea, but besides just being unoriginal, it wasn’t exactly sold to the audience all that well. A few generic scenes and lines at the beginning of two episodes, isn’t developing a character at all. Its just hamfisting SOMETHING into a story without even taking a moment to consider if it works at all. 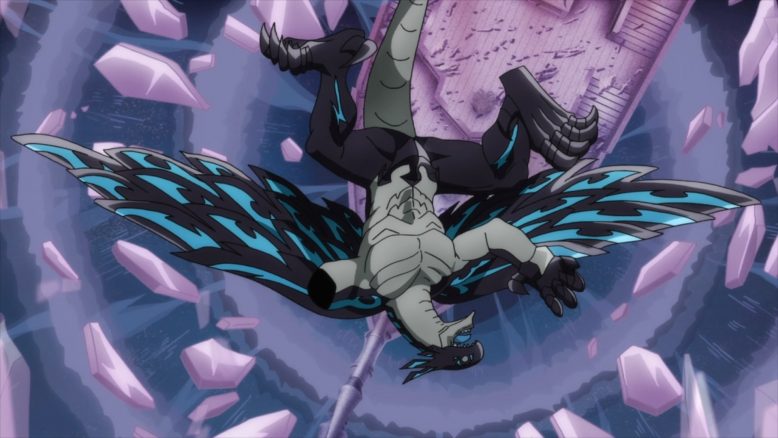 Hiro Mashima is a better writer than this. And that’s a sad fact in itself, but what really bugs me here, is that Mashima-sensei had a chance to correct a mistake he made when he was writing/making the original manga. Acnologia COULD have been expanded upon and developed in this Final Season. The Final Season came out AFTER the conclusion of the manga, and so there was plenty of time to retrofit and shift the story of the anime to properly develop and setup Acnologia as a character and villain.

Why that wasn’t done, and why the effort was even put in to try and “fix” Acnologia in the last 3-4 episodes of the entire show? I just don’t know or understand. The rather cheap and lazy nature of this story, is what drives me to wonder if Acnologia had been better served as a mysterious Dragon that never spoke at all. Maybe, the show and the villain and this story could’ve all benefited from less rather than more. 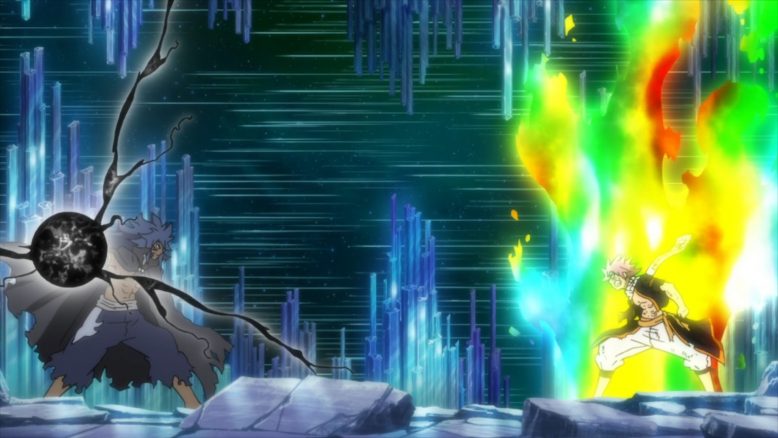 In any case, its safe to say now, that the effort to build up Acnologia, an effort that’s anime original, was and is a pretty abject failure. Acnologia is, at this point, just an obstacle that the two main protagonists of Fairy Tail need to contend with.

And yes, you read that right, I mentioned “two” protagonists. Natsu is obvious, of course, but what I did like about this episode is how it kind of acknowledged and elevated Lucy to the place that I think she’s always actually had; the place of a main character. Natsu and Lucy are both the main characters of this story, and I think them kind of tag teaming against Acnologia from different places and perspectives, i.e leading the charge on two different fronts, is pretty cool. 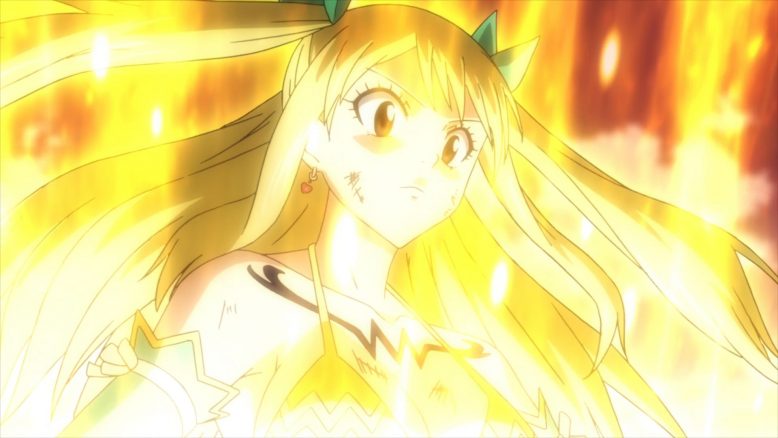 Its a nice, solid way to end the show for sure, and I just wish that more care had been put into giving them a proper platform and a situation to shine. Lucy got her moment this week, by leading everyone back in Maganolia to victory and trapping Acnologia in the Fairy Sphere. Natsu, is most certainly going to finish the job next week. My little guess about him using every other Dragon Slayer’s magic for one big attack, is more or less a done deal now. And that’s cool, I guess. Its definitely nothing special, but at least both that and the action we got this week, was solid and entertaining in its own expected and predictable way.

Now… With just one episode left to go, I’d say that the one final thing I’m curious about is what we’ll get from the show in its final episode. We can expect a decent chunk of next week to wrap up the Acnologia battle, and after that, we’ll be left with perhaps less than half an episode to give the show an epilogue. 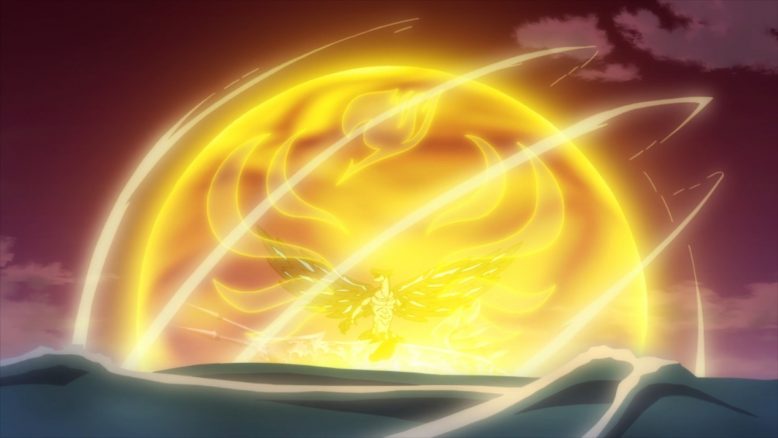 That worries me, if only because I feel like that’s just not enough time to provide a satisfying ending to this story. I get that there’s a sequel manga available right now, but given that this is the final story in the main Fairy Tail plot line, I kind of want something definitive and conclusive right here. Will we get that? Well, I guess we’ll find out, next week, won’t we?