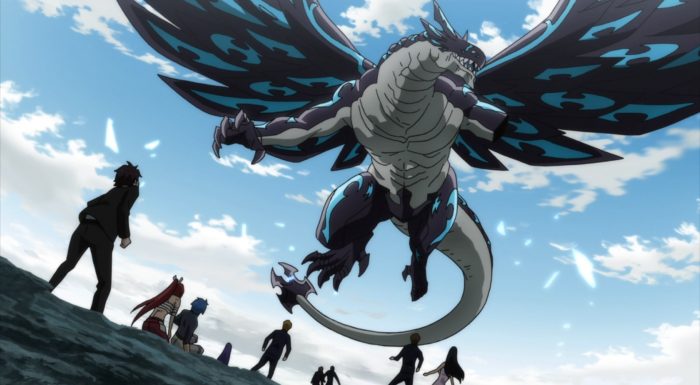 Well… On the plus side, there’s only a couple of episodes left now. That statement may be very passive aggressive, but that really is the sum of how I feel about Fairy Tail as we are a mere two episodes away from the show concluding. We know now, what the show’s finale is going to revolve around, and any hype building or setup is more or less over. This is indeed how Fairy Tail’s Final Season and story arc will conclude, with a whimper rather than a bang. And that too, after a series of whimpers and painful disappointments. 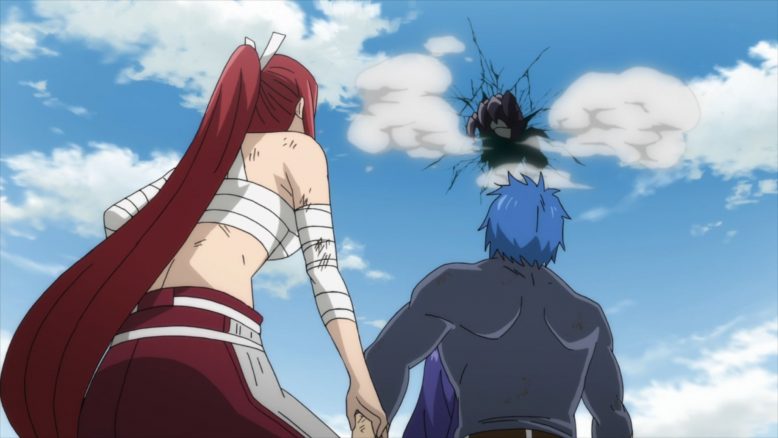 The problem, of course, is that not only does this week’s episode undo much of what made last week’s episode so good, but it does it in a way that removes any stakes, sense of excitement or hype before the big final event that’s coming up. There’s nothing interesting or noteworthy left here now, and instead we have a bunch of annoyances that just serve to make the audience more frustrated than entertained this week. 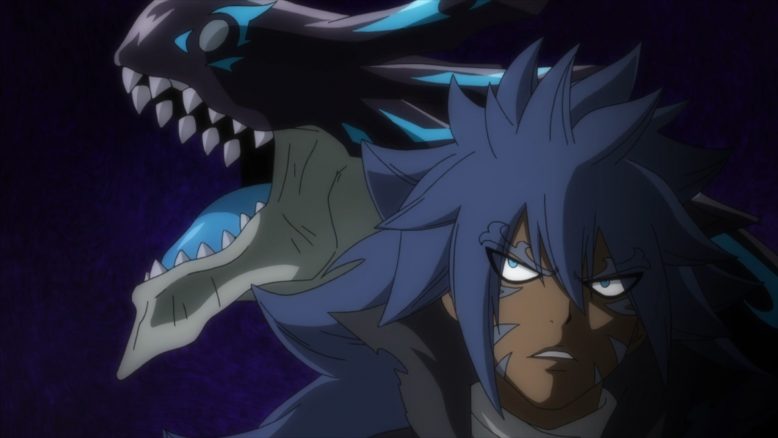 Of course, before we get into the smaller nitpicks, lets start with the big headline event; Acnologia coming back. This whole story moment actually went about as anyone would expect (except Anna, but we’ll get to her in a minute). Acnologia just ate the darn Time fissure, because you know, he’s basically Natsu’s last minute powerup plot device turned into a villain. A part of me kind of wishes that Acnologia had simply just been too strong to be kept inside the time rift, but I guess him eating it was apparently seen as more shocking. To me, it just makes Acnologia even more overpowered than he already is, and the whole split soul vs body thing doesn’t do anything to make him more defeatable IMO.

And while we’re on the topic of Acnologia, let me state, for the record, how lame of a villain he is. Not because he’s overpowered, or has a rather uninteresting human character design, but because the darn guy just hasn’t gotten any character development or a backstory. We have no idea what makes Acnologia tick, or why he wants to destroy the Dragons or the world. He’s just a maniacal crazy person right now, and one that just has too much power. 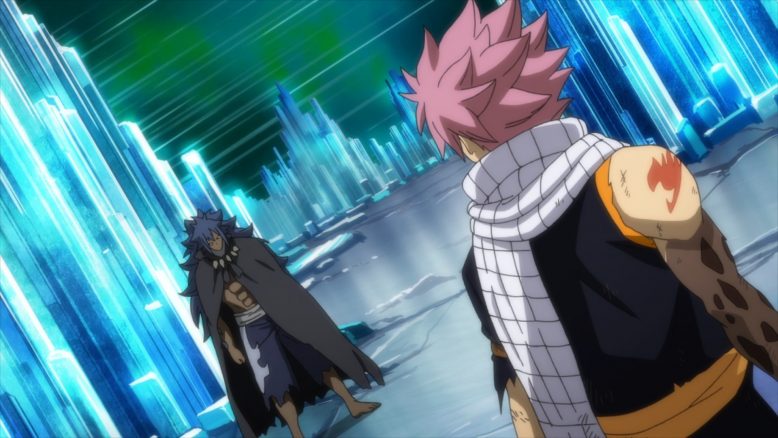 I’ll say it once again, if Acnologia was intended to be the story’s final antagonist, then Mashima-sensei really needed to develop him better. Zeref, after all, was developed to an extremely high degree, from the very start of the series even. The Dark Mage Zeref was a name echoed throughout the story, over the years. Acnologia, we first discovered in the S-Class Mage arc, and that too after we ran into Zeref.

Also, I suppose its a bit late to mention this, but whatever in the heck happened to Zeref and Acnologia being linked? In the S-Class Mage arc on Tenroujima, Zeref particularly mentioned that it was when he got attacked, that Acnologia would appear because his life was tied to his. Did we just… Ignore and forget that whole thing? Why the heck was Acnologia chasing after Zeref then? 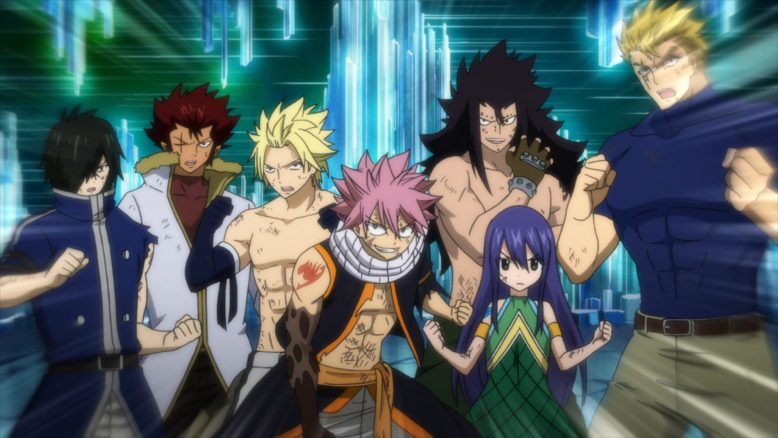 It almost feels like Mashima-sensei had a much deeper or different idea for both Zeref and Acnologia, and then completely changed his mind later on or just forgot. The Acnologia and Zeref link is just a plot hole at this point, although I guess there’s enough of those to go around.

In any case, it seems like Acnologia, for whatever reason, is hell bent on destroying the world with his new found Time powers, and he’s using the remaining Dragon Slayers to stabilize his powers. Now, lets not even pretend that this makes a lick of sense. Its a rather clumsily put together excuse for Natsu and the other Dragon Slayers to all be in the same area and team up against Acnologia. Which, yeah, I’ll admit, it was cool to see them all join up together, but man was the process to get there kind of dumb. 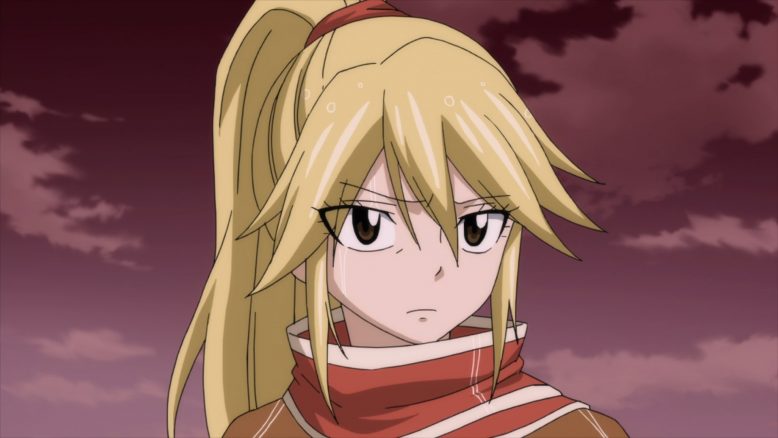 Speaking of dumb, lets talk about Anna for a second. I love how she just goes: “Oh yeah, I never thought Acnologia would eat the very thing I was trying to trap him in”. At this point, its not even a contest, Anna is simply put, the worst character in Fairy Tail. She’s done nothing but ruin lives, and created problems, and all in service of just making Acnologia stronger. The fact that Erza and the rest even listen to this crazy woman at all, and don’t immediately put her in a mental institution, is quite honestly, INSANE.

Anna is one of those terrible characters that’s served no purpose in the story, other than to make things worse. She’s ruined the plot, world building and she’s an annoying character that acts like the whole world centers around her. I honestly haven’t hated a character in Fairy Tail as much as I do this woman, and that’s friggin miracle given that we first saw her only a few episodes ago. 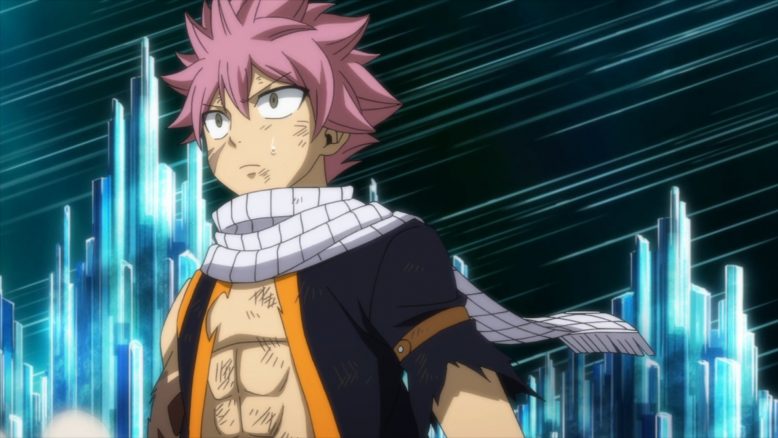 Even her death is undone by her and “MENNN!!” just appearing out of the time rift like nothing happened. Anna would’ve been redeemed if she had just died for nothing, but she unfortunately has not only made things worse, but survived as well.

And Speaking of survival, lets talk about Natsu as well. Look, lets not kid ourselves, Natsu was never really going to stay dead. I just wish, I dunno, that him coming back was something other than another misdirection. Natsu suddenly disappearing was a such a cool, chilling moment in the last episode. To learn, this week, that it was all just another misunderstanding and misdirect by the story, is one insult to many. 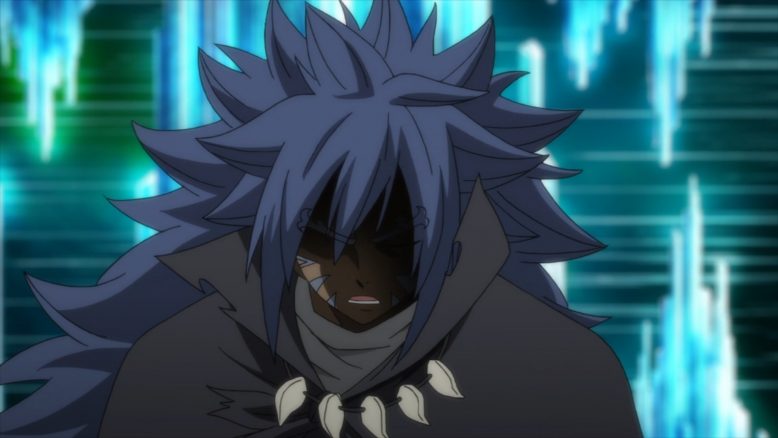 At this point, any character getting anything bad done to them, just doesn’t stick. Every character is safe, every character survives, and that pretty much puts this BIG battle against Acnologia as nothing other than a formality.

We all know Natsu and Fairy Tail are going to come out victorious, and we all know that literally none of them are in danger. At this point, I don’t really see what there is to see other than what’s expected here. With two episodes left, I guess, I really am just ready for this to all be over. Its just really sad that the story and Mashima-sensei didn’t surprise us one last time like I hoped they would.