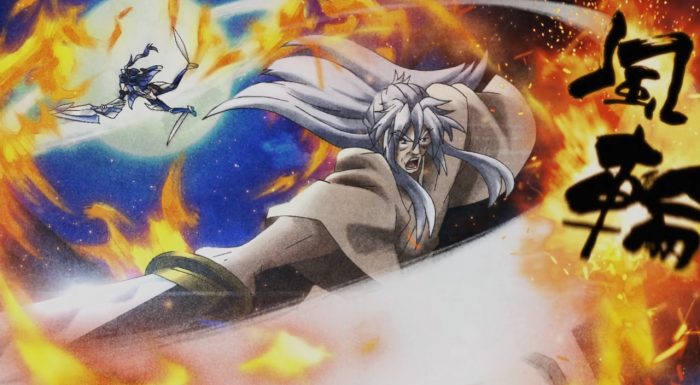 This episode is another reminder showing that you can make any season in a franchise the best. There was so much going on in this episode and yet it never felt like too much. One more example of this season giving me things I did want and things I didn’t think to ask for. We are likely looking at the last season of this season and yet everything is coming together so well. A lot of focus coming this time being taken to tackle Fudou (almost literally), Noble Red (who are now Noble Dead), and setting up Shem-Ha as the only antagonist left for the show to focus on. And all of this is looking incredibly awesome to me. We get to make this entity using Miku’s body the main focus for almost a third of the show. There’s a lot they can do here. 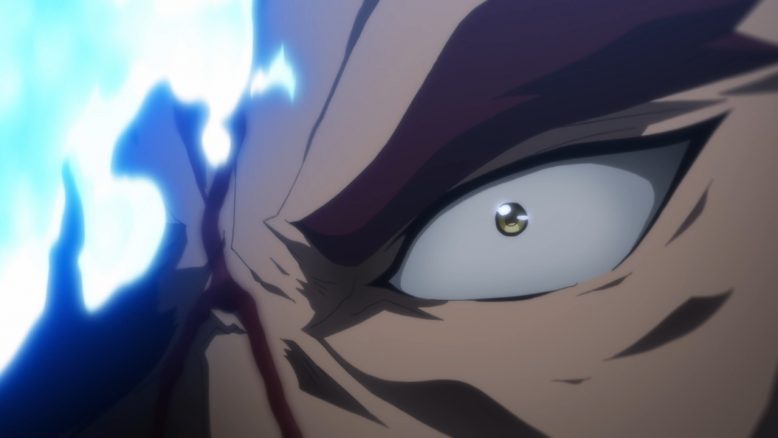 I was really hoping that we’d get a chance for Genjuro to fight before this season was over. And thankfully we got that here. Genjuro facing off against his creepy old man was as over the top and spectacular as I expected. These two are insanely powerful individuals that can straight up fight Symphogears. That they were so over the top was perfect. And frankly I’m fine with how things played out as well. For one this show is about the Symphogear users like Tsubasa and not as much Genjuro. But also the key point is that he is a softy. That’s been a defining trait of his for the whole show. That he lost because he wasn’t determined to kill his own father isn’t shocking. Genjuro is a good guy and he showed that both in his fight and also in preventing Tsubasa from killing Fudou.

Much like with Ver I can see the approach Genjuro wants to take here. No reason to stain Tsubasa’s hands with the blood of a monster like that. Let him go to jail and likely be executed according to law. Fudou doesn’t get to be a monster or a sentinel. He’s just a criminal and will be treated as such. Not quite as satisfying for those who want some blood spilled, but I think it works just fine here. Besides…they got more than enough blood in this episode. 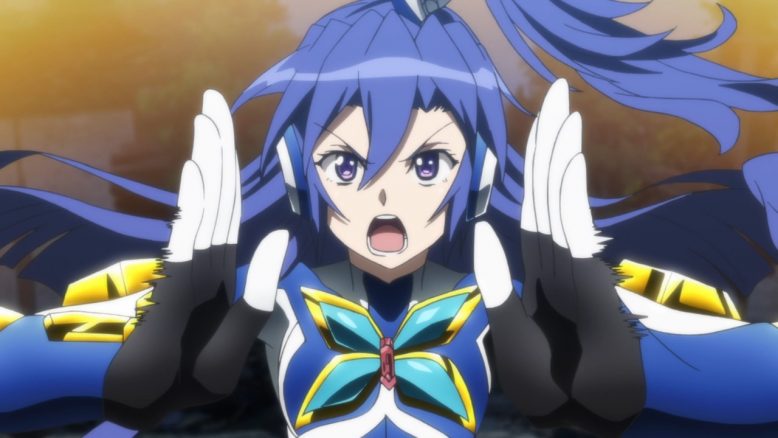 While this in a sense tackles Tsubasa’s major issues, it doesn’t feel as if she’s done here. This episode is going to remain a major event that will both impact her future and her arc for the rest of the season. The layers of trauma for Tsubasa are staggering. She was manipulated into kidnapping Miku, fought her friends, knocked Maria around, had her beliefs challenged, her father died, and she nearly killed Fudou. All of that coming off the start of the season which had a massacre at one of her concerts! What a nightmarish time for Tsubasa. At least it did allow her to have a badass moment when her Amalgam was activated. I suppose that cancels my guess that Amalgam modes would all have duet songs accompanied with using them. The action itself was just fine though. 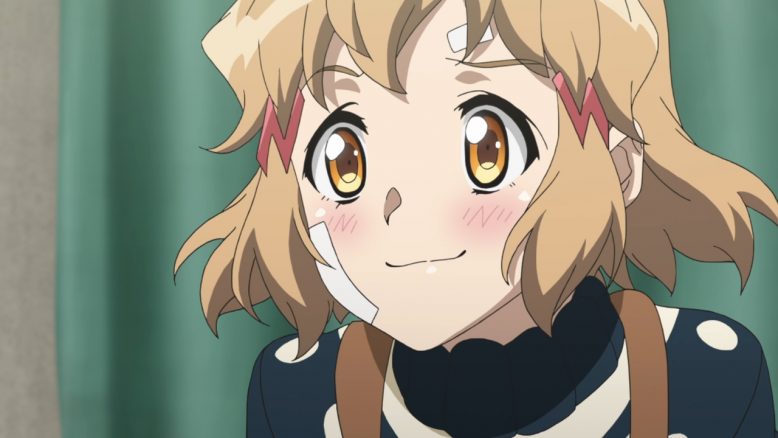 Never did I think we were going to see Hibiki’s father return. I suppose it did line up fairly well with this episode being about father figures. Tsubasa’s father stepped in and died to protect her. He had a lot of problems, but he did step up when needed. And while I still don’t like Hibiki’s father as a character…he was perfectly fine here. They didn’t spend too much time on him. It was just enough of the guy and he was just being supportive enough for a Hibiki who was dealing with a lot right now. In some ways it was appropriate that he wasn’t just able to instantly give perfect answers. The best he could do was offer some advice that Hibiki could work with. And I don’t mind them bringing back the whole “I think I’m cursed” bit. This is going to be a trial for Hibiki. 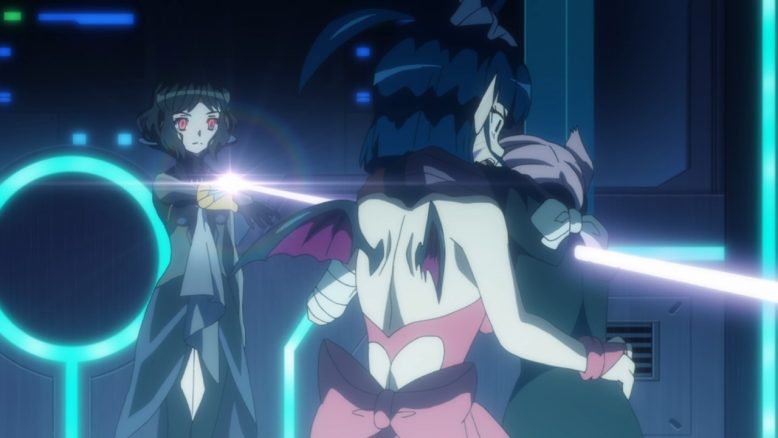 Goodbye Noble Red. I can’t say that Millaarc deserves to rest in peace of course. There was no future that she was going to either live or go free in. While Fudou ordered the concert attack, Millaarc was the one that did it. And even Vanessa had been steadily getting more ruthless and brutal as they went along. At this point it was more of a question if any of them would survive. And the answer appears to be no in that case.

That was a short, but rather brutal scene. Clearly they were desperate, dying, and needed to try something to save themselves. Unfortunately they were rather foolish and didn’t consider that Shem-Ha might not play ball with them. There’s no doubt that Millaarc died from being cut in half. Elsa was only partially more fortunate in being simply stabbed with a beam and somewhat chopped up. I doubt Vanessa is going to easily walk away from being demolished either, even if she is mostly machine. 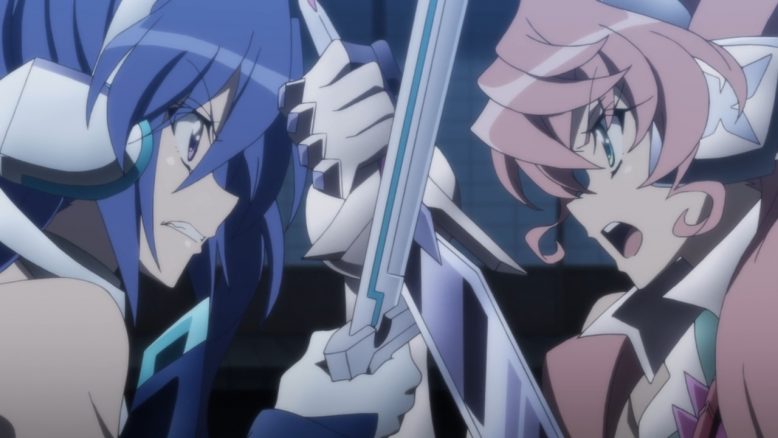 This was another really strong episode. Maria got a chance to take a leadership role and show that she is one of the oldest members of the cast. She has come a long way that she’s trusted and asked to go along with the whole “let’s arrest Fudou” mission. Heck, Maria even gets to slap some sense into Tsubasa. There is still likely to be a connection between her Apple song and stopping Shem-Ha later on. So I don’t think Maria is done yet. But her most important job may simply be to help a Tsubasa who is going to be dealing with even more grief now than she was earlier in the show. All of this happening at a time when there is no room for rest.