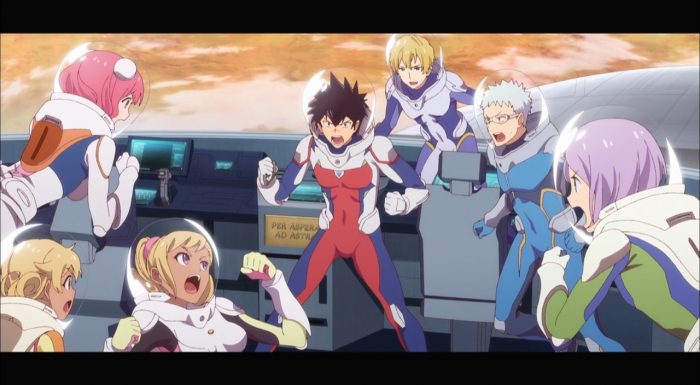 This just remains a really good space adventure. The drama picks up pretty nicely this week as focus shifts to the very real possibility that someone sent them on this trip to die. That’s a pretty good way to stress the main characters out. Honestly I’m also really happy that they didn’t sit on the whole sabotage thing for very long. It can only blow up in their faces if Kanata was found to be hiding such critical information. While the odds are high that one of them is a saboteur, the vast majority of them are victims. It’s for the best to just work as a group and try to stay ahead of any potential pit falls. Besides there is still a perfectly fine chance that no one is evil here. Heck maybe the puppet is causing all this trouble somehow. We are talking science fiction after all. 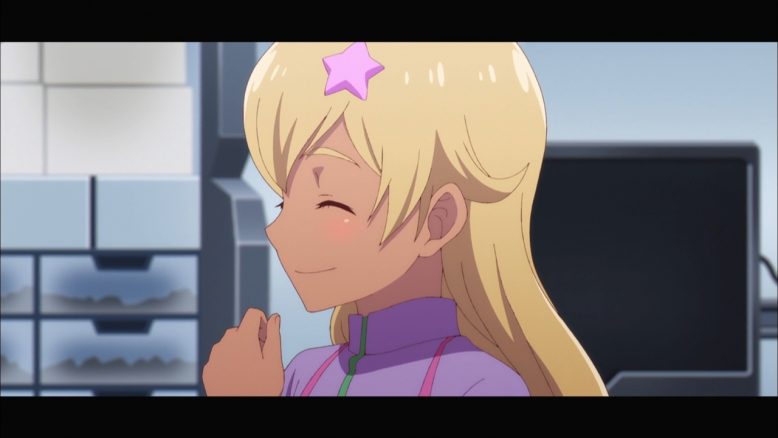 I’d say everyone took the concept that an assassin is among them and people sent them on this trip to die as well as expected. Quitterie did lose it momentarily, but she also recovered rather fast. While it should be a given for someone to apologize, it is still nice to see. And unlike other times in this show, finding out that people are trying to kill you is a good reason to freak out and hesitate to trust people. True enough that Aries is least likely assassin in this bunch, but when in a panic everyone looks scary. I oddly see a pretty good friendship forming with Aries and Quitterie by the end of the show. Mostly since while Quitterie can snap once in a while, Aries is the type that can shrug it off. And if Quitterie continues to grow as a person she’ll lose it less.

And I’m glad the show is still keeping up how weird the situation with Funi is. She appears to have been picked for adoption expressly for this assassination plot. I’m still 100% betting on her being a clone though. It is just too suspicious. She may have been taken to that orphanage just to instill that story about losing her previous family into her mind. And it does make her the most likely to have a connection to the sabotage. Why else was she put on this trip? There’s no way a kid like her would need to be killed. I’m not sure if she’s involved in the sabotage or if she’s some kind of lure for the death sphere. But I guess we’ll find out over time. 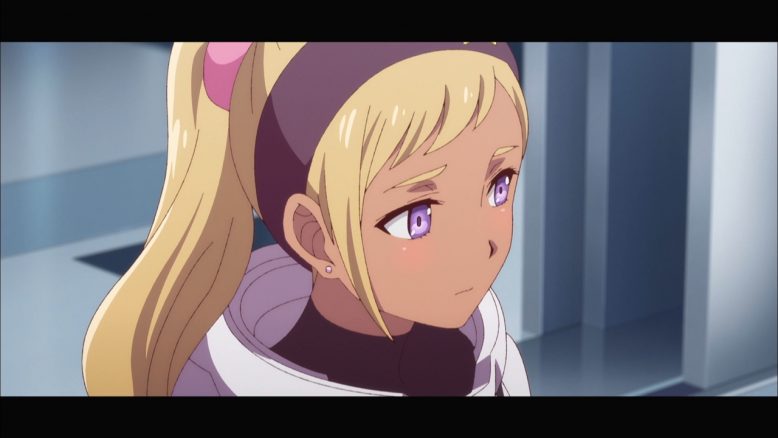 This conspiracy is way more involved than I ever expected. This is quite the over the top strategy to kill off some kids. Who the heck is behind this and what are their motives? If they just wanted to kill these kids why do it like this? Wouldn’t killing them separate and back on Earth be a lot easier? I suppose it is harder to investigate if they are thrown into deep space through a weird sphere of death though. It is all the scarier too if any of these characters went through with this intending to die in the process of killing the rest. That’s pretty dark. 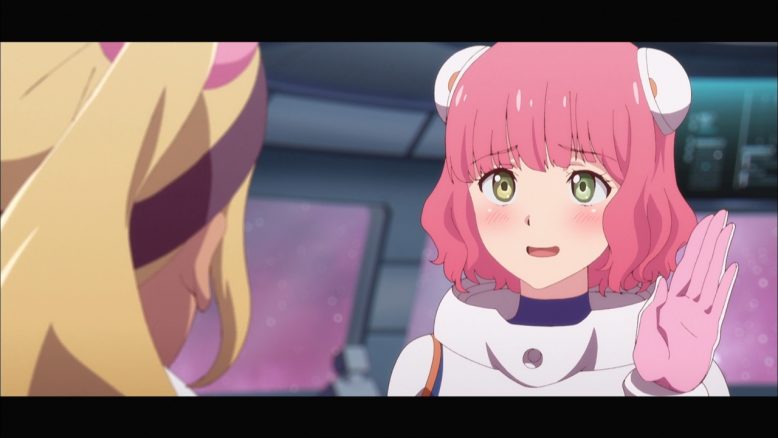 I’ve got to say that Aries is proving herself to be as key a figure on this crew as any. In some ways she’s a better captain than Kanata himself. She has a great ability to calm people down, break the tension, and also reason things out logically. The one leading the discussion at times about the saboteur was Aries herself. I’m glad at least that Kanata isn’t a dense guy that is missing out on how valuable she is to this crew. Even when she needed saving, Aries was in a sense bringing the group together by necessity. Hopefully she can continue making inroads to befriend the various members of the crew over time. 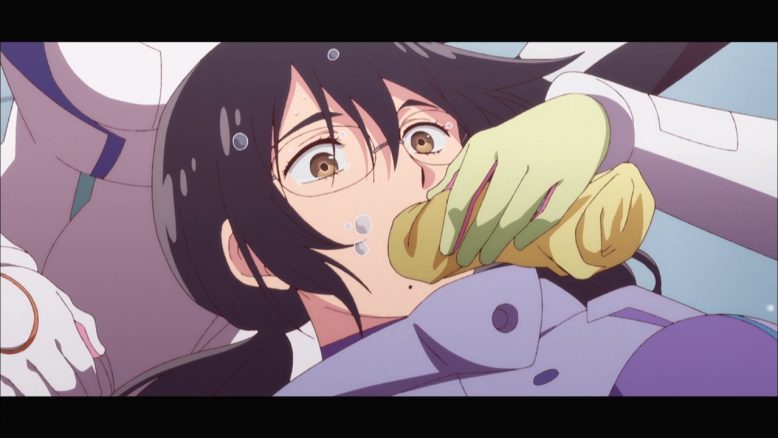 I definitely feel for Yunhua. No doubt some hints are being thrown at her being connected to this. Her self-esteem is incredibly low and this episode didn’t help there. Whether it was grabbing a bag or contributing to their emergency situation…she just couldn’t help out much. Heck she even managed to nearly drown while floating around in zero gravity. That has to be an embarrassing way to go. I’ll give credit to Quitterie for being on the job and quickly handling it. She may have to work on her bedside manner, but she gets the job done when needed. At the very least we got a picture of what has been eating at Yunhua. That flashback said it all. Whatever shyness and confidence issues she has were likely made all the worse by her mother.

There is some mystery and drama with Ulgar by the end. But I think we’ve seen enough of his desire to stay alive to say that he’s not a suicide assassin. No doubt I’m a bit worried that he’s got some serious issues under the hood. The show is being pretty blatant with lines like him not expecting to use a gun on birds. Just who or what was he expecting to shoot with self-trained gun skills. Skills that he developed long after their society abolished guns. It is kind of impressive to see a futuristic society that decided on less weaponry after reaching space instead of aiming for more. At the very least we know that Ulgar doesn’t want to die. I’d half expect that gun to come in handy against some dangerous animals down the road. 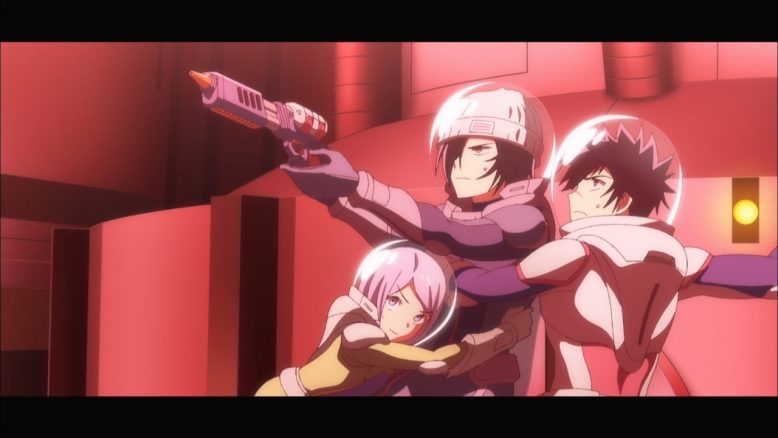 This was another strong episode. The drama was heavy throughout with the worries about the sabotage and of course the meteorite crisis. But at the same time the team is growing closer. There are outliers like Yunhua and Ulgar, but it is just a matter of time with them. For the time being they are coordinating themselves well enough to stay alive. But clearly it isn’t going to be that easy to make it back home safely. And the key for the main cast is figuring out this mystery before they get back. If they don’t know who is trying to kill them then they could just walk into a death trap upon their return home.