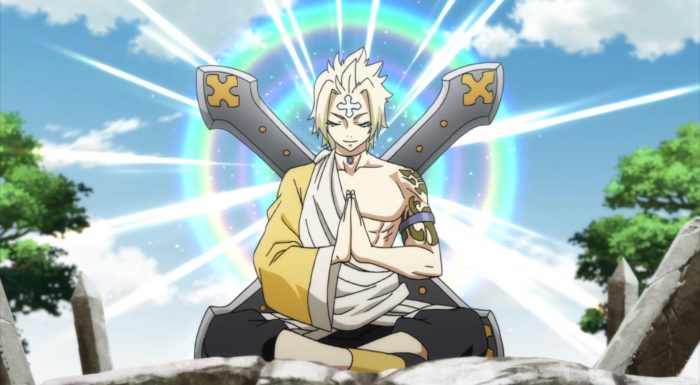 Let it be stated that, going into this episode, I was hopeful. The last episode had been particularly good, and there was hope that Fairy Tail and Mashima-sensei had managed to get back to what had made this franchise so powerful and memorable to many. Those hopes? They were quickly dashed in this episode, as the show and the story proceeded to show off one of the most odd and crass things I’ve seen from this show in a huge while. 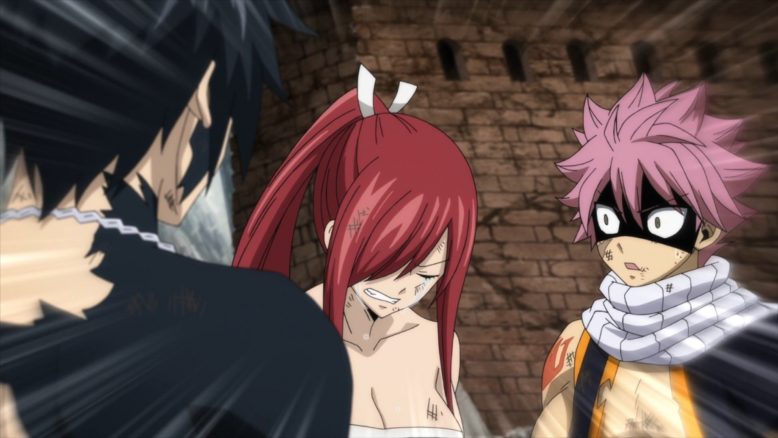 The only silver lining I have in all of this, is that the Erza moment that last week’s episode ended on, was not completely ruined this week. It may be strange to say, but I actually mentally associated the beginning scenes of this episode with the last one (Since I saw them back to back). The reason for that is because the whole scene with Erza, Gray and Natsu? That felt like we were back in the supremely awesome Fairy Tail of old, the show and the story that we’ve since lost.

Everything about Erza stopping Gray and Natsu was handled… Excellently. First, the show built up on the fact that Makarov had more or less just left the Guild and its members to Erza (who for all intents and purposes is now the Quasi Guild Master after this moment here). Erza using Makarov’s old words to basically calm both Gray and Natsu down? That was awesome and a really solid moment. 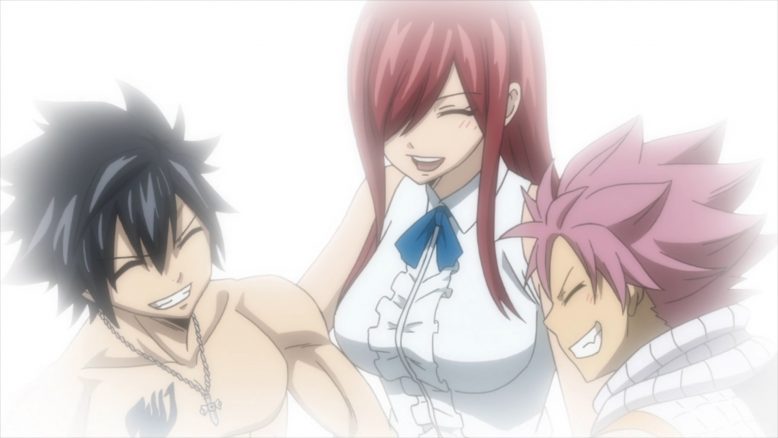 Plus, the way both the show and Mashima-sensei dove into the complex relationship between Natsu, Gray and Erza? That was just Mashima-sensei at his best. Erza’s always had this very sisterly bond with Natsu and Gray. She’s the eldest of the three siblings, and she really does act like their big sister most of the time. We’ve seen Erza boss them around and act like the scary elder sister, but seeing her cry and be vunerable here? That was solid stuff.

The fact that Erza cries and sheds tears as her two younger brothers try to kill each other, is what makes Erza seem even stronger and more powerful as a female character. It doesn’t take away from how badass she’s been in the past, and the show even throws in some nice flashbacks to really drive that point home. 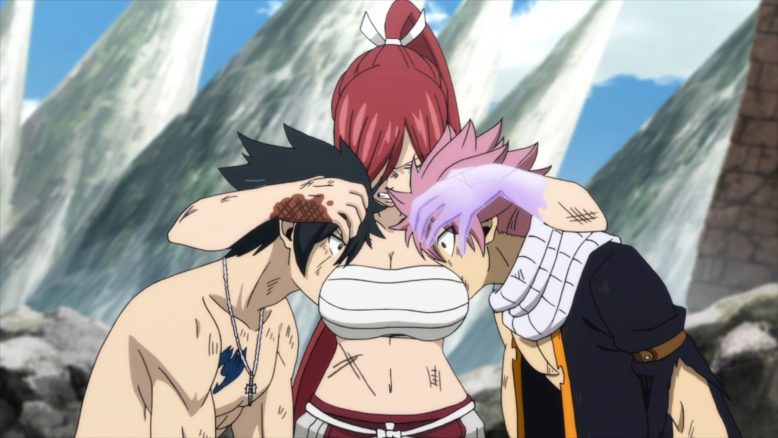 No, Erza is a strong willed female character, and the only times she breaks down is when those closest to her are in pain or difficult circumstances. Erza crying because both Natsu and Gray have forgotten their entire childhood together with her? That’s a powerful and well done moment. Its a moment that, like the Makarov death last week, builds on years of storytelling and brings it to a satisfying finish.

Gray and Natsu have both looked up to and after their elder sister, so its only fitting that she comes in and snaps them out of their murderous rage with a rousing speech from their surrogate father’s old words. I wish we got more of this stuff in this final season, because this was the reason I fell in love with Fairy Tail in the first place. 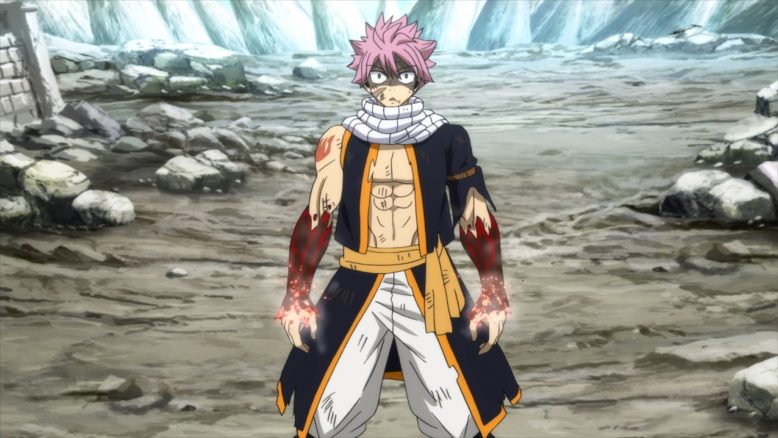 Character moments like Natsu looking back to the first time Erza cried in front of him, and how he steamrolled the guy who was responsible for that, and then realizing that he HIMSELF has become that the very thing he detested and fought against in the past? That is what Fairy Tail used to be all about.

I wasn’t entirely happy about how we got to Natsu vs Gray, but I will say that the solution to that particular problem was both elegant and satisfying. So much so that I didn’t mind it when Juvia and Lucy arrived and proceeded to finally let Natsu and Gray pass out from relief. Sure, it feels a bit forced, particularly since I still feel like the Natsu x Lucy pairing is a bit under developed, but I guess the Erza stuff just worked for me really well. 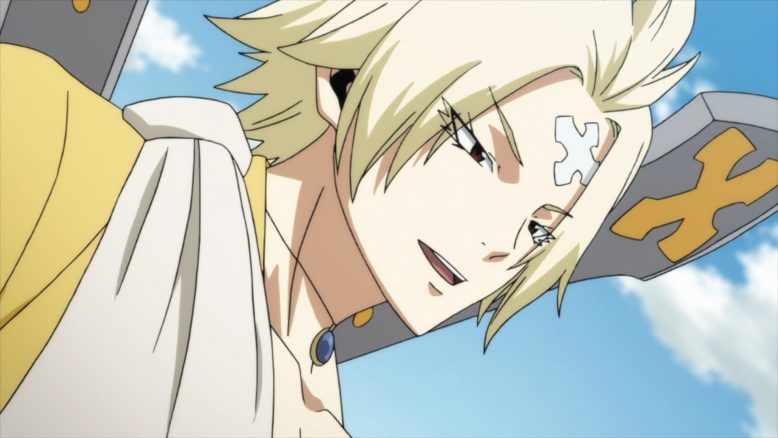 The rest of the episode, however, was unfortunately pretty darn vile. Look, I’ve mentioned before that I’ve been able to tolerate Mashima-sensei and Fairy Tail’s odd penchant for lewdness and “fanservice”. There are times where its almost broken me, tempting me to leave the series entirely, and I’ve seen people definitely leave after some of the stuff the franchise has pulled. 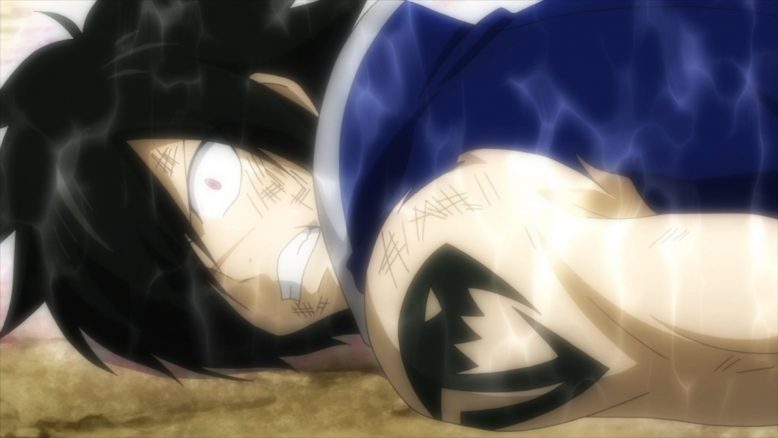 This feels like a bridge too far for Fairy Tail. The idea of Larcade’s magic feels less like a genuine unique power, and more so just an excuse to have the male and female characters just make weird expressions and sounds. I’m not sure why we’re even focusing on this at this point, especially since the whole story would’ve worked just as well if Larcade’s power just granted happiness instead of sexual pleasure.

And make no mistake, that’s exactly what’s being implied here. That every character just can’t fit their very human urges, and that Larcade is somehow a master over this stuff because of his troubled childhood. 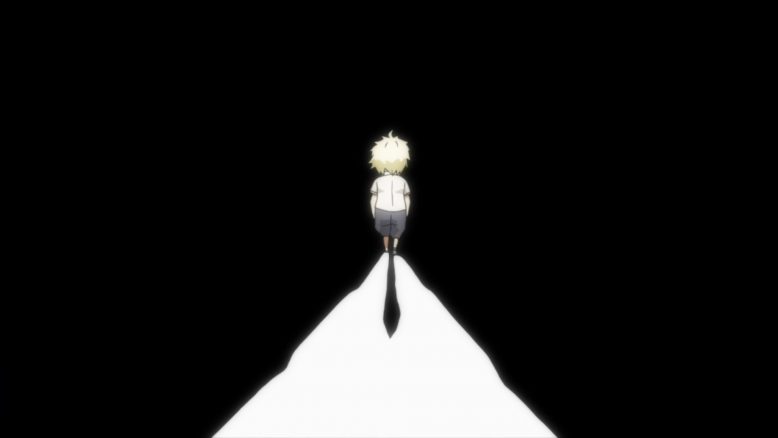 Him being the son of Zeref and Mavis? That just baffles me. Are we saying that Mavis and Zeref were actually “together” in that way. Lets not forget that Mavis has the body of an 11 year old, so that whole thing kind… irks me. Lets also not forget that Mavis died soon after what ever love was shared between her and Zeref, so how was Larcade even born?

Plus Zeref actually preferring Natsu over his own son? That’s… Uh… weird. It makes me think that there’s more to this story, but after what I just saw in this week’s episode, I’m not sure that I care. Fairy Tail using ecchi/hentai tactics in its story just, ruins it for me. I simply can’t stomach this stuff, especially in what’s been one of the weakest story arcs and seasons in this franchise’s history. 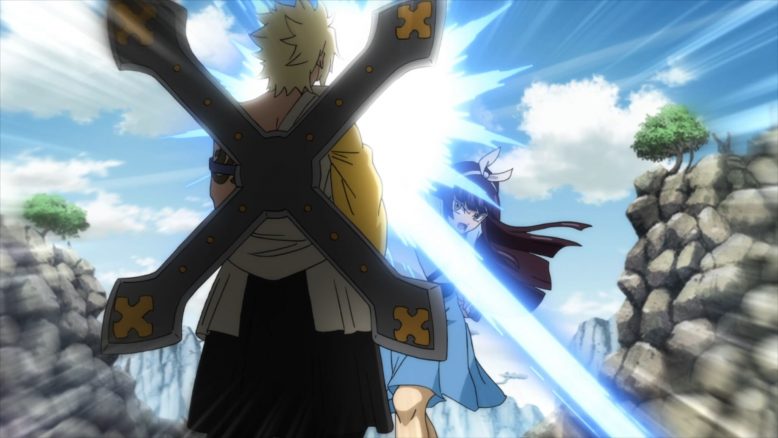 I legit thought about just dropping the show after this. Its just… Fairy Tail and Mashima-sensei have gotten to the point, where I’m uncomfortable talking about or associating myself with this show. Fairy Tail definitely had fanservice before, but the idea was always a bit tongue in cheek, for the most part. This? This just felt exploitative and beneath the show.

So yeah, I’m still considering whether I want to continue to blog this show. We’re in the home stretch, and I’ve covered this franchise for years, but I’m honestly wondering if I can even call covering this show worth it. I can watch it, and I probably will watch it to the end, but I’m long past the point where I care enough about this story and franchise to actually “talk” about it. 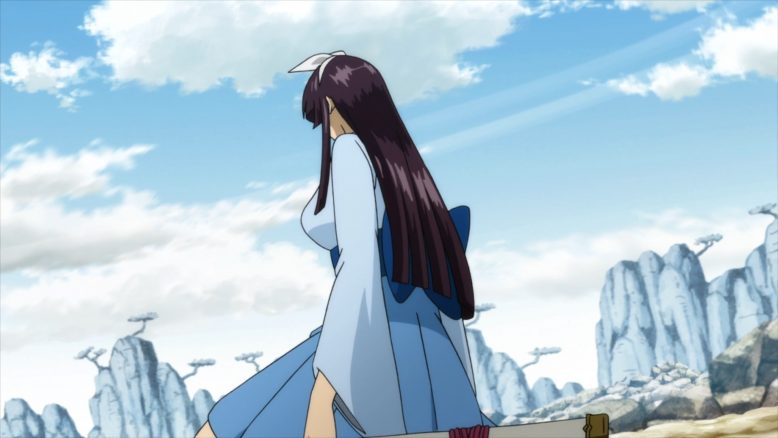 Lets just leave it at that… For now. Sigh…