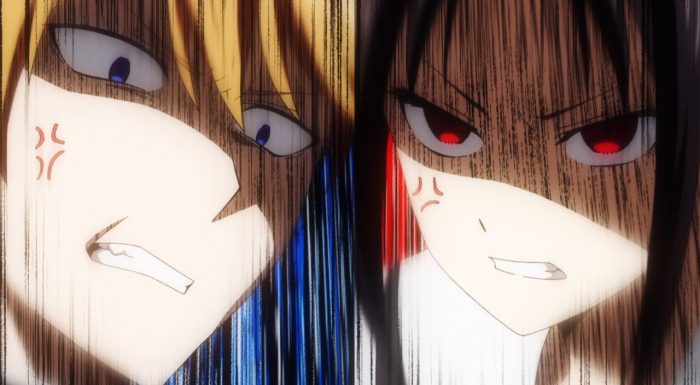 This show just constantly delivers great episodes. And we are reaching a point where there is a legitimate story connection between the last two episodes. This episode is all about what happened last week with Kaguya getting sick. It is of course a good thing for the show to go there. To not tackle the aftermath of Kaguya waking up to Shirogane sleeping in her bed…would be crazy. And this episode did have some nice progression for the characters and in terms of the story. We get to start out with the two being extremely awkward with each other, moving to try and seek help to reconcile, and then we were able to end with a summer plan to spend time together…with Ishigami. It was a good chance for Kaguya and Shirogane to figure themselves out and we got plenty of laughs along the way. 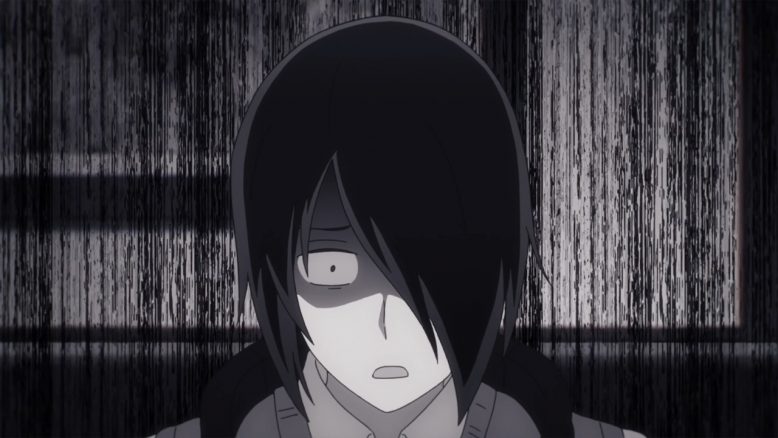 The cake war was purely hilarious. And yet it was something honestly fueled by emotion on both sides. Fighting about who would accept the cake was ridiculous, but you get where they were coming from. They were bound to clash with the under the surface frustrations. This wasn’t a battle about confession and neither side was actually trying to be clever. They were both just frustrated. I can’t blame Kaguya for her side of it. She wakes up out of a fever dream and the guy she likes is right there. Now either he did something while she wasn’t herself or he did nothing. Pros and cons exist for both. If he did something then that was taking advantage of her in a vulnerable state, but if he didn’t then it raises the question of whether he’s interested in her physically.

The same goes for Shirogane. He really tried his best to not do something. It required serious effort to rise above extreme temptation and not do something he’d feel guilty about after. That held out and then was thrown out is tough. And the fact that she seems suspicious still just makes for a feeling of “where is the reward for my strength of character.” And that all left poor Ishigami terrified of the cake war he feels responsible for starting. I utterly love that he ran off to find Chika who was the only savior. She did end up interrupting, but honestly the way they were going at it…probably for the best that she did show up. They might have found a way to keep fighting even after the shared cake moment. 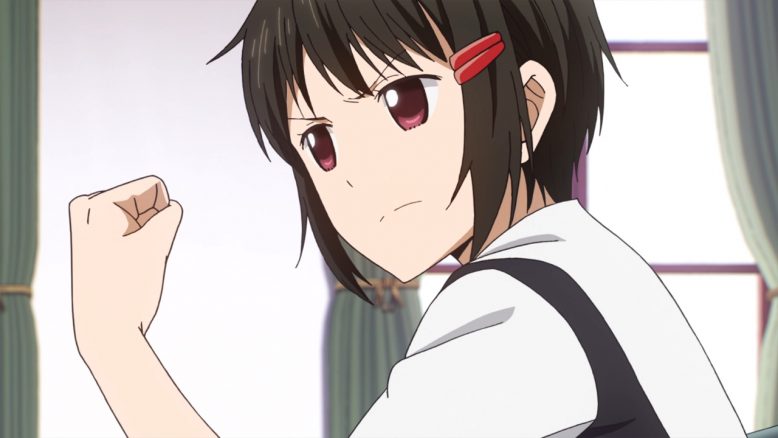 I also love how Kashiwagi is continuing to play a role as a supporting character. It does make sense as well to go that route. She is one female acquaintance that Kaguya might feel comfortable confiding in. I can totally understand why she doesn’t want to turn to Chika about this sort of topic. She could turn to Hayasaka, but Hayasaka is the one who helped create that situation and her advice might not be what Kaguya is hoping for. Kashiwagi is a nice girl that has a boyfriend and it kind of balances out her asking Kaguya for help earlier. She is a pretty normal person to confide in anyways. Honestly she does just offer the sorts of reactions that Kaguya was probably hoping to hear. It helped at least reinforce that she wasn’t completely wrong.

The key though for Kaguya was realizing something she couldn’t easily confide in anyone about. It was a moment of personal growth to have things click together and understand herself better. She wasn’t presently upset about him ending up in her bed or not taking responsibility via a confession. The issue was a muddy one of wanting him to have done something and being afraid of the implications if he didn’t do anything. Kaguya has a lot of confidence and strong points. But this sort of terrain isn’t one she’s extremely confident about. She does have worries about how attractive she is to Shirogane. If she was confident then maybe she’d presume he simply showed extreme strength of character. But she can’t be that rational and confident about such a topic. It was cute that she realized why she was mad and how she couldn’t possibly verbalize it to Kashiwagi. 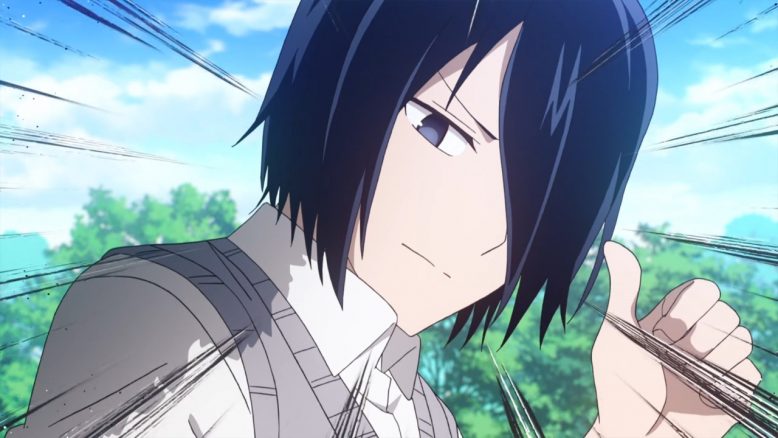 It made total sense for Shirogane to bounce his thoughts off Ishigami. They could have gone straight up mirror matchup in having him confide with Kashiwagi’s boyfriend, but they held up on that. One reason is probably that Shirogane has his pride and position to consider. Kashiwagi doesn’t treat Kaguya as if she’s some goddess of romance, but her boyfriend does consider Shirogane to be a love master. Ishigami has his own issues and probably isn’t the perfect consult, but he’s a friend that Shirogane trusts to talk to.

His reactions were extreme and definitely went down some odd tracks. But he did listen and it allowed Shirogane to piece together his own thoughts. He held out from doing anything extreme, but he knew it was important to admit to Kaguya that he did touch her once. It was the perfect thing to do anyways. Shirogane could lift any guilt he was feeling and Kaguya was reassured that he was attracted enough to her to make some kind of move. 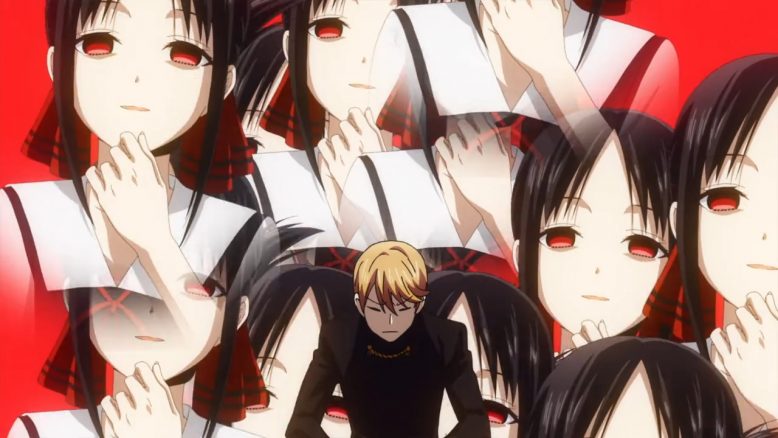 The last part didn’t obviously connect to the other two, but it did fit nicely. Once they got back to normal then it was possible to have a funny little scene about making summer plans. Chika of course showing how she is utterly unpredictable and you should never make plans around her. That realization hit Shirogane hard and Kaguya had long since given up on trying to use Chika for her plans. It also showed Chika’s own immaturity and selfishness. Ishigami was totally right to go at her. Chika is going to Hawaii and Spain for her summer break. But she has an issue with everyone going to the summer festival without her? Understandably she wants to go with everyone, but she was in the wrong there. Ishigami just didn’t have the confidence to handle her outburst and was ready to go home depressed. 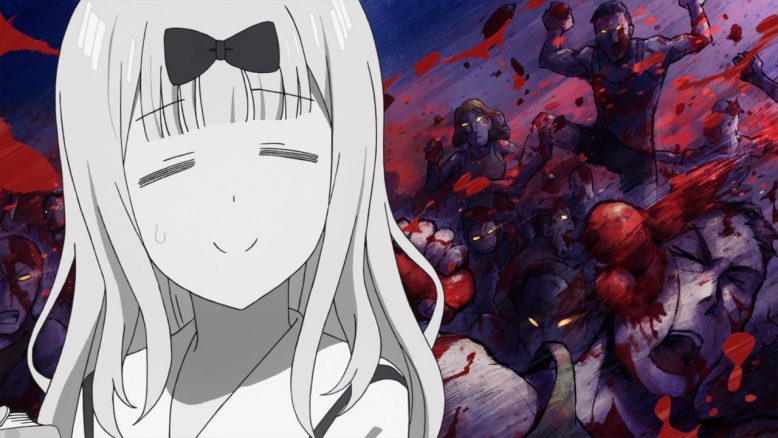 I’m glad Kaguya and Shirogane backed Ishigami up. It was in their benefit since otherwise they may have given into Chika’s unreasonableness and not gone. He gave them the chance to spend a summer event together and they let him know that he was in the right this time. It was a lovely win/win scenario to end the episode. This episode had a lot of focus on character motivations and the actual relationship between Shirogane and Kaguya. It wasn’t superficial and instead delved into how the two of them really felt about what happened last episode. And yet the show was still funny when it had the chance to be and left me with a smile. It might be one of my favorite episodes in the show thus far.