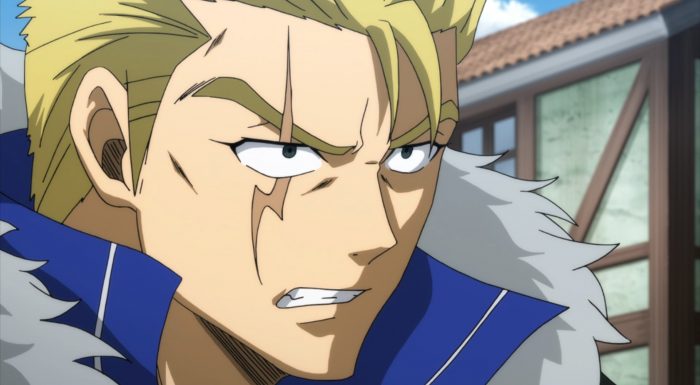 The uneven Fairy Tail final season swings the pendulum towards “pretty good” this week. That fact, in turn, is a really nice change of pace from the last few episodes. Shockingly, as we take a break from the main crux of the franchise and this final arc, Fairy Tail seems to be at its strongest. Sometimes I guess, a show just has to take a break from the plot heavy lore, and just focus on good clean shounen action. And this week, with a focus on characters other than Zeref and Natsu, things have definitely taken a turn for the better. 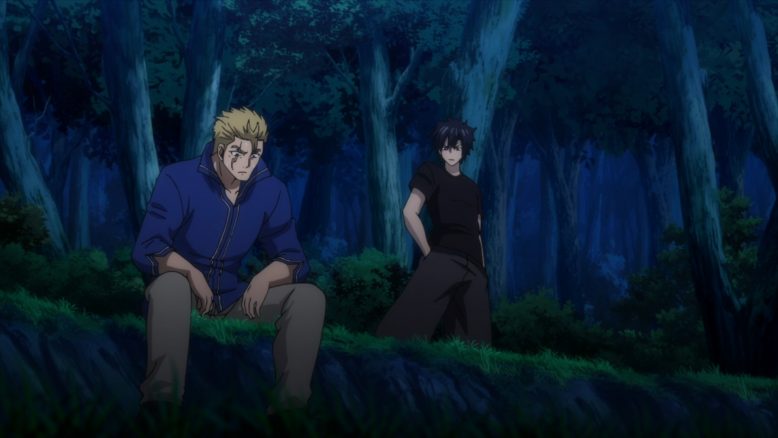 Chief among the characters that stepped into the spotlight this week, was none other than Fairy Tail’s resident Lightning delinquent turned big brother, Laxus. And Laxus? Man, what can I say? I love the character quite a bit. Ever since we had Laxus kind of level up in the Tartaros arc, he’s been one of my favorite characters to follow in this series. Much like Gajeel or Jellal, this has been a character that Mashima-sensei really succeeded at redeeming. Its no coincidence therefore, that this episode takes a hefty amount of content from the Tartaros arc itself, as we get knee deep into what it seems like Laxus’s big battle in all of this.

Here’s the thing, Laxus is pretty darn strong. As even Wall Ehto mentions this week, Laxus has the strongest magic power in Fairy Tail (probably second only to Makarov I’d wager). So how then, do you make a battle where Laxus is concerned, an exciting, thrilling ride? Simply put, you have to nerf him or put him at a disadvantage in other ways than raw power. In the Tartaros arc, that was made possible by the dispersal of a poisonous gas, and with Laxus having to sacrifice himself to protect everyone around him. 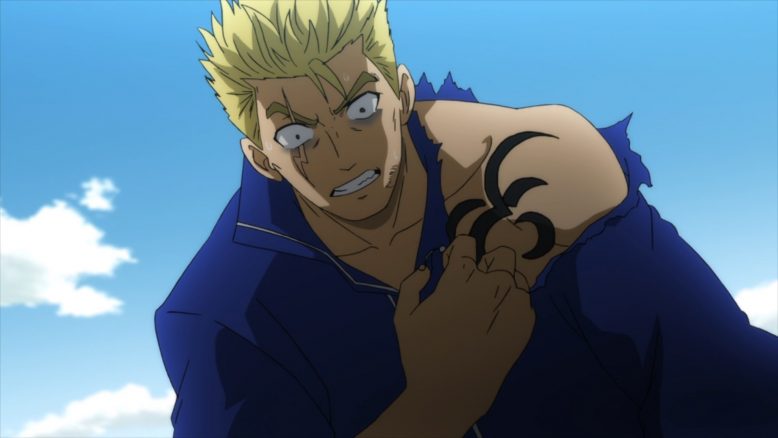 Here? Well, that same act of heroism is coming back to bite Laxus, at this late stage. Seems like the damage that Laxus incurred when he did take the Bane particles into himself, have more or less permanently ruined his body and internal organs. And really, while it is annoying that the show has to continuously nerf Fairy Tail’s best characters and put them in tough situations, I think in this case, it makes sense. Using Laxus’s past good deeds and sacrifices and having them come into play here is really awesome, and it definitely adds a sense of weight and tension to the battle that he’s fighting now.

Laxus could probably wipe the floor with Wall Ehto if he was at a 100%, but the fact of the matter is that Laxus will NEVER be at a 100% ever again. If anything, the fact that Laxus is functioning and fighting at all is pretty darn impressive, and it makes the character just look so darn badass as he takes on facing the guild’s most difficult enemy while dealing with a seemingly terminal condition. I was already rooting for Laxus to take down one of the Sprigann 12, but with this little handicap added, well, things are definitely tense. 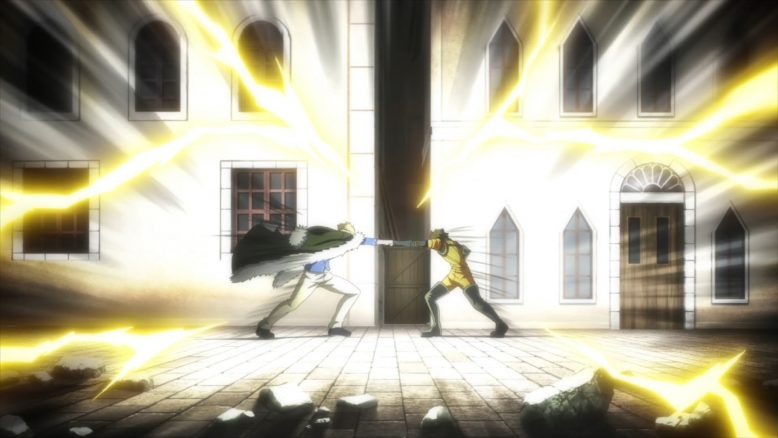 And really, since this is the final arc and the final season, its not at all clear if Laxus is actually going to be able to survive, when its all said and done. It seems like the guy is really on borrowed time here, so that I think adds some much needed drama to what has otherwise been a pretty meh arc thus far. Also, quite surprisingly, the animation for the Laxus, Wall Ehto battle wasn’t bad, which also helped sell the battle a lot more.

Of course, Laxus wasn’t the only character to bring some hype to the story. Going back to Serena and the other Ishigar Wizard saints, that battle too takes a really interesting turn. For one thing, finding out that Serena is actually a Dragon Slayer with 4 Dragon Lacrima inside of him (as opposed to the one that Laxus has), well., that was a nice twist. But what really threw things into motion was the arrival of none other than Acnologia. 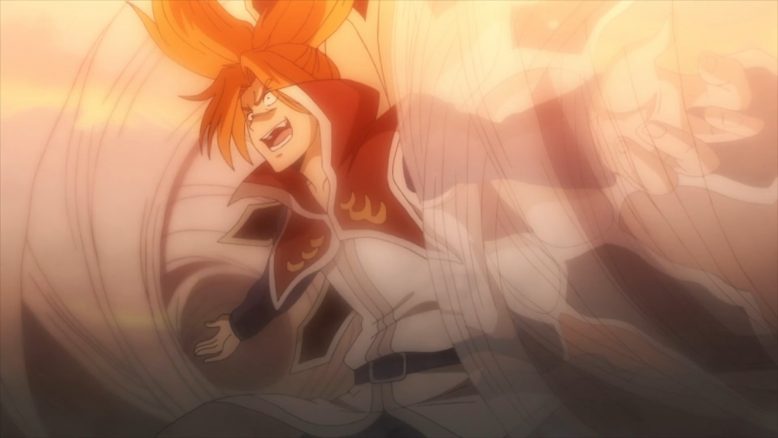 The math is pretty simple here. Serena is stronger than 4 wizard saints, and has four kinds of Dragon Slayer magic, but Acnologia takes him out in one friggin hit. And right now, it seems that Acnologia is really the strongest character around in the Fairy Tail universe, even more so than Zeref. Plus the little tidbit that Zeref is actually after Fairy Heart so he can take down Acnologia, adds an interesting twist into the mix.

So Zeref was at first trying to save the world, but now he’s chosen to annihilate everyone, and his plan is to go through Fairy Tail to defeat Acnologia. It really does highlight the real equation here, which is a battle royale between Fairy Tail, Zeref and Acnologia. The problem, of course, is that rather than fight against one another, it would probably be better for Zeref and Fairy Tail to join forces. Of course, with Zeref as far gone as he is, it doesn’t seem like that’s an option. 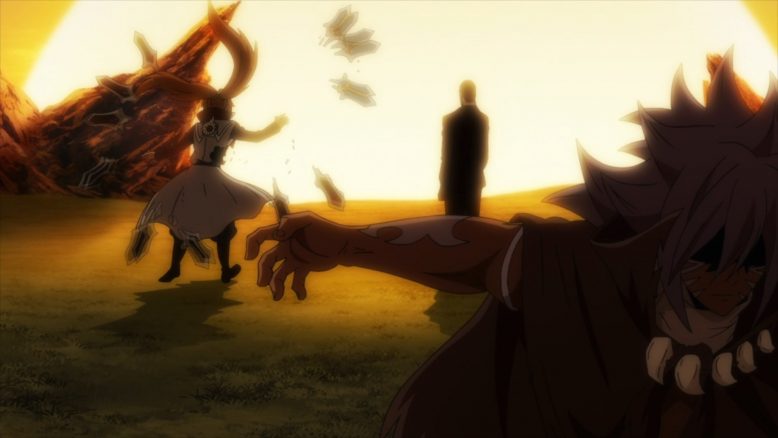 Now, the last bit of stuff that I think is worth talking about is Wendy and her whole battle with Dimitiria. Can’t say I’m too excited about this one, and I think its a pretty safe bet that Wendy and Shelia are really going to have to sacrifice something to come out on top here. I’m not entirely sure what it is, but as it stands, these two girls seem horribly outmatched here.

Which, I think is the larger issue I have with the show despite how good this episode was. I still can’t see Fairy Tail coming out on top in this whole story here. Natsu has lost his trump card and is unconscious, Laxus is staying alive by sheer will, and everyone else seems horribly under equipped to deal with what they’re dealing with here. 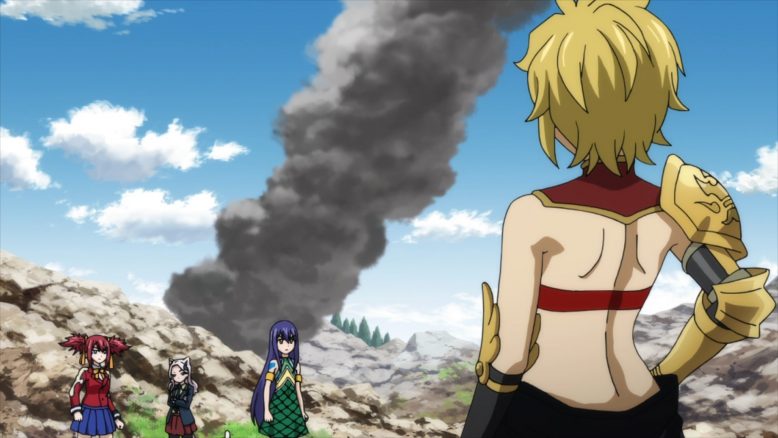 As the last arc of Fairy Tail this all just doesn’t feel satisfying. I want to see my favorite characters go out with a bang, give their best performance before we say good bye to them forever, but the story choices that Mashima-sensei is making here feel, weird, to say the least. There’s this weird whiplash between power levels, between the heroes needing to win and the state that they’re in, and then there’s also all the missed opportunities with connecting the conflict to the overall lore.

It seems like the enjoyment of this arc is going to stem from seeing some long running characters finally kind of complete their character arc, whatever it may be. For Laxus, I guess that means protecting Fairy Tail one more time, For Wendy it means working together with one of her closest friends against an unbeatable enemy, and for everyone else? 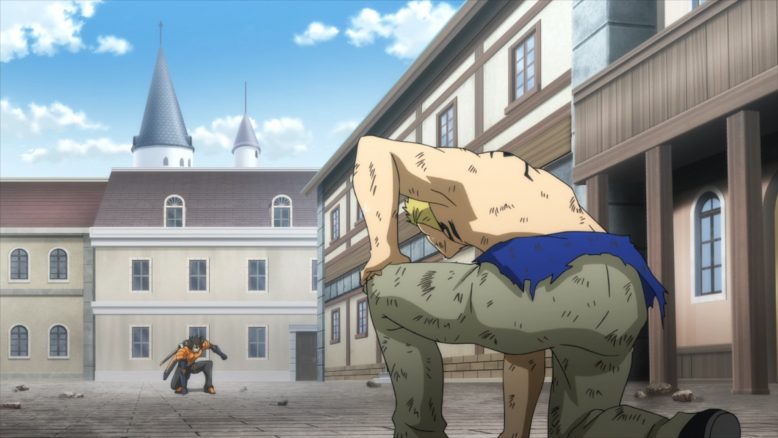 Well, I suppose we’ll see similar last stands as the show and franchise start to wrap up. The thing is though, I for some reason, can’t get overly jazzed or excited here. We’ve seen enough odd choices and weirdness that I think I’m a little jaded, and even good episodes like the one this week feel like unexpected surprises, rather than what I think should be the norm. Ah well, We’ll take the good episodes and moments when we can get them, I suppose.