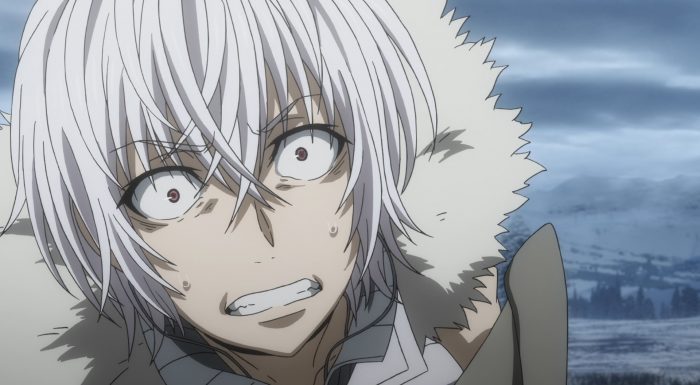 I’m starting to see what all the fuss is about now. If this week’s episode is any indication, its quite clear that this final arc and the story contained within is going to have a series of powerful payoffs for any long running fans of this franchise. As unfortunate as it is that we had to “rush” to get this stuff, the “good stuff” as it were, I think its worth enjoying what we’re getting here, regardless. 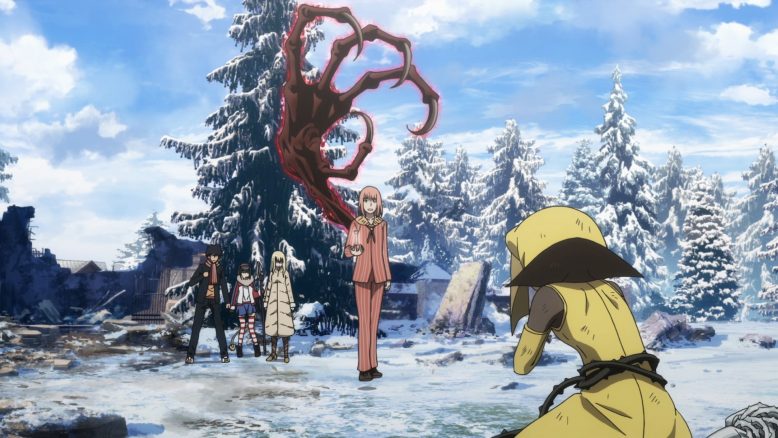 As I’ve said numerous times with regards to this series, I’m not a huge fan of the direction this third season took. World building, setup and character development are things you just can’t skimp on. The effect of half-assing those things is definitely going to be felt for years to come, perhaps even after this third season is done. But for what its worth, this episode was good, really good, and while it doesn’t help the series as a whole, it’s a darn good episode.

Simply put, as much as I want to hold the past mistakes of this show’s adaptation against this episode, I don’t think that’s entirely fair or right. This episode was done really well, and the story beats it communicated were really felt. The pacing was great, there was enough of a balance between the central plot of this episode (Accelerator vs Misaka Worst) and checking in with the other characters of this show, that it all just worked. 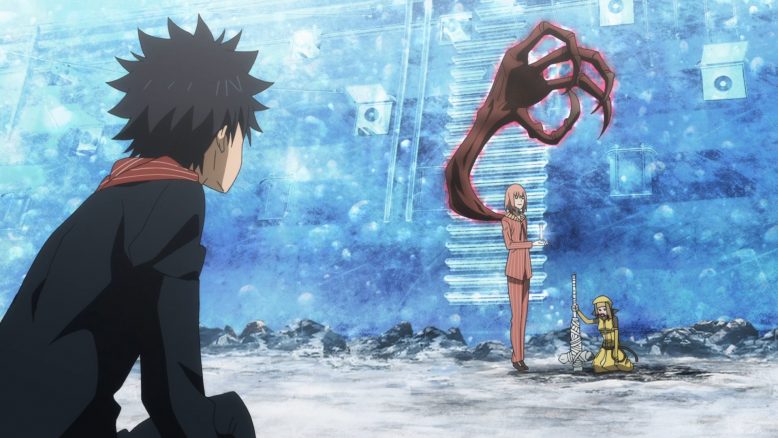 And before we get into the meat and potatoes of this episode, I think its worth talking about another big thing that this third season in particular has been hinting at and is now directly addressing; Touma and his decision to hide his memory loss. I confess, when that whole thing happened in the early parts of season 1, I viewed it as nothing more than a clever gimmick. A plot point or idea that brought a sense of unique-ness to both Touma and the Index story as a whole. I never, in my wildest dreams, imagined that this throwaway side note would end up becoming one of the major defining points of the story.

But it seems like that event, and Touma’s decisions afterwards, are not only going to come back into play, but may bite him pretty badly. See, while I don’t fault Touma for hiding the fact that he lost his memory by saving Index, it also would hurt someone more if they found out that someone they cared about was hiding this major fact from them. Ignorance is most certainly bliss at times, but if that illusion is ever broken, then the pain that follows can be tremendous. 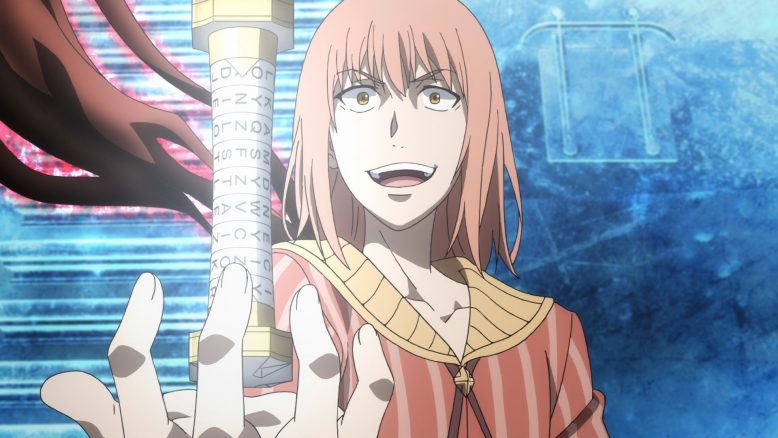 The fact that Fiamma has more or less communicated Touma’s little secret to Index now, is a pretty interesting moment. Touma having lied to Index for as long as they’ve known each other about such an important fact, may very well threaten to break their bond. And I say that, because as of now, Touma and Index have interacted as equals. Sure, Touma saved her, but Index didn’t need to feel extremely indebted to him because she wasn’t aware of how much he sacrificed in order to make it happen.

Now that Index knows, she can’t really stand shoulder to shoulder with Touma. She’s not his equal, and she’s actually indirectly responsible for him losing his memories. Now, Touma doesn’t see it that way, and I or the audience don’t see it that way, but its something else entirely when you’re looking at it from Index’s perspective. 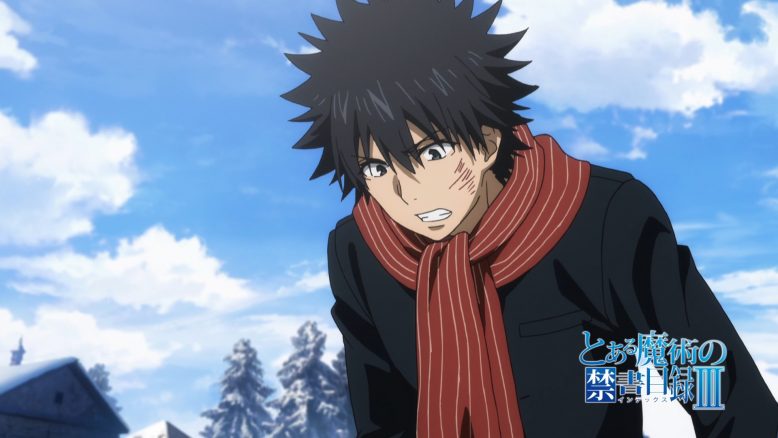 And just the simple fact that this entire idea is getting explored and hinted at, as part of this early arc, is pretty darn impressive to say the least. While Fiamma’s whole opening of “right and wrong” weren’t all too interesting (Touma as usual dispelled that idea pretty quickly), his last jab really struck at the heart of what Touma’s whole selfless philosophy is. Touma doesn’t act because he’s got some sense of justice or moral superiority, Touma acts because he’s empathetic and sensitive to people’s pain, to an extreme.

Simply put, Touma can’t ignore someone in pain, and every action he does is to save and help those in pain and suffering. So for Touma, his big Achilles heel here, is the fact that he may very well end up causing that sense of suffering, through one his own actions, as noble and well-intentioned as they may have been. 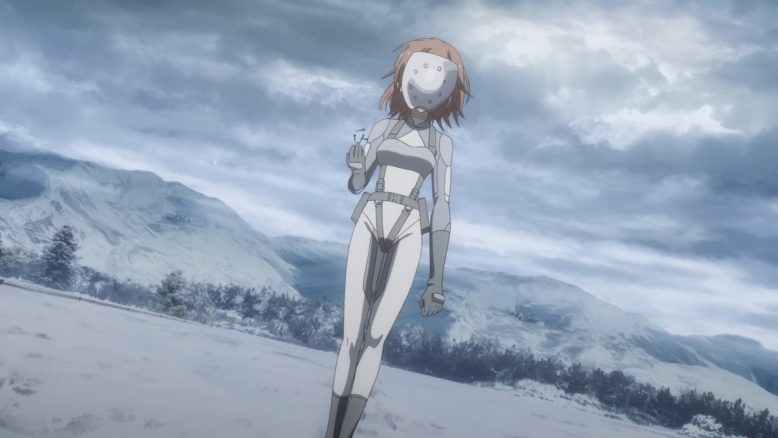 Now, its worth mentioning that while I’ve spoken about this whole Touma thing at length here, it really is just a side story to the main conflict this week. Which, honestly, is kind of impressive in itself. Its been such a long time since I’ve wanted to dive deep into something Index III has thrown at its audience, but its even crazier to see that there’s ANOTHER, even more impressive, front and center in this episode.

The moment in question? Accelerator and his whole battle with the latest Misaka clone, which the episode title calls Misaka Worst. And man, I’ve seen it float around that she’s better termed “Misaka best” and I can’t say I disagree. As a character, and a concept, Misaka W is a pretty ingenious concept. And really, as a villain or antagonist, Misaka W is I think a textbook example of how to do a villain correct. 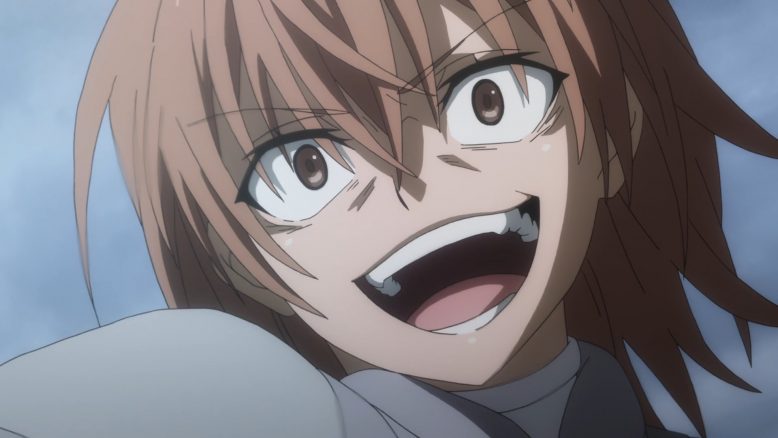 What makes villains super awesome, and why characters like the Joker from the Batman comics is quoted as being one of the best, is because they often act as a twisted mirror of the primary character themselves. In Misaka W’s case, she’s both the manifestation of Acceletator’s biggest sins AND she kind of shows off what would’ve happened if the Misaka clones had actually learned from Accelerator and adopted some of his crueler, darker tendencies.

But heck, even the villain and character work regarding Misaka W isn’t the highlight here, but just what she actually means for Accelerator as a character. Since that first arc where Accelerator lost to Touma, he’s been on this path of redemption. He can’t quite call himself a hero nor does he fully commit to the idea, but there’s a sense of pacifism and just general regret that’s informed the guy’s actions. 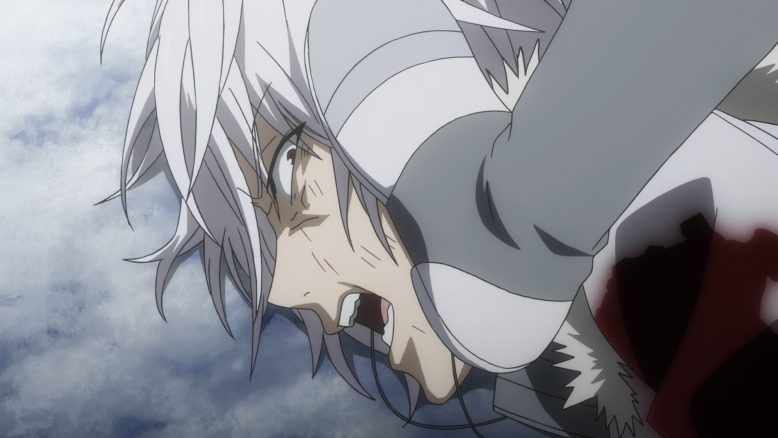 He’s made a vow to protect Last Order and to never hurt another Misaka clone again, ever. And just as the guy seems to finally be getting close to a point where he could potentially free Last Order and the rest of the girls from Academy City’s plans, along comes a twisted, older version of the very thing he’s sword to protect, that wants to kill him.

And as Accelerator struggles with his own vow and what he wants to do, Misaka W is merciless. She uses Misaka Mikoto’s familiar Railgun ability, but replaces the coin with friggin nails! That, plus the rather psychotic speech and cruel way in which she takes down both Accelerator and targets Last Order is something to behold. 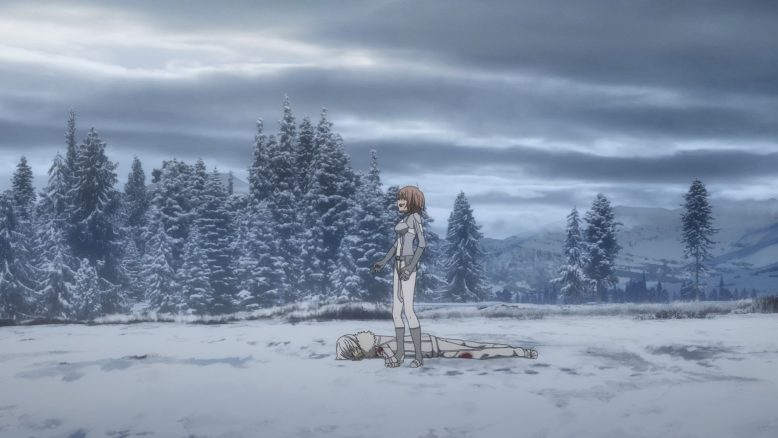 As Misaka W herself mentions, she’s the entire network’s anger at Accelerator, personified. And its at the point where Misaka W ends up targeting Last Order herself, that Accelerator finally loses it and just brings the beat down on Misaka W. Its what happens after, that is both impressive, and super enough to make this episode an S grade episode.

See, As Accelerator mercilessly starts pummeling Misaka W, she begins to cry out in pain and beg. Beg, like the earlier Misaka clones that Accelerator had killed in Academy City. Beg, like a helpless, trapped girl. And at that moment? Something in Accelerator snaps. 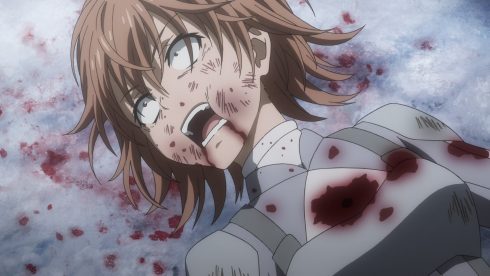 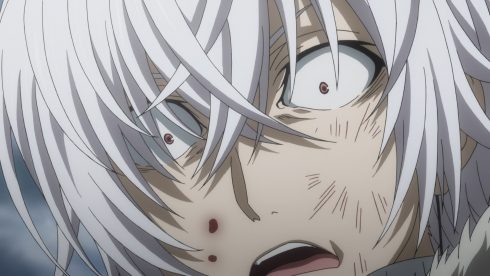 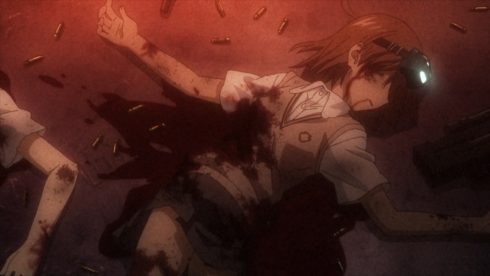 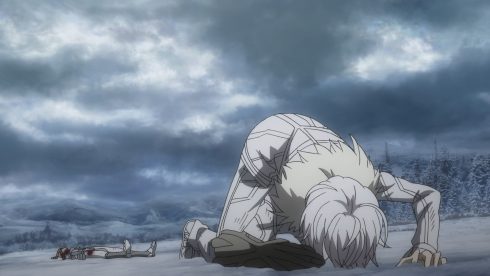 If there’s ever been an argument for Accelerator having developed a soul or a conscience and having come so far, then this episode and this moment is it. Accelerator basically adopts the Touma modus operandi in this moment, and refuses to let a girl in front of him suffer. Instead of hiding behind his whole “I’m a villain anyway” crap, Accelerator moves beyond it all, and commits to protecting and saving Misaka W.

And man, is that a powerful, amazing moment of story telling. As I saw this moment play out, as I saw Accelerator get angry and rage against Academy City and vow to save Misaka W at all costs, I couldn’t help but just, clap. I clapped hard, at the screen, just utterly impressed and amazed. Excited, impressed, emotional and totally rooting for Acceletator… Seeing this moment was one of the most satisfying moments of being an anime fan, let alone a long time fan of the Raildex series. 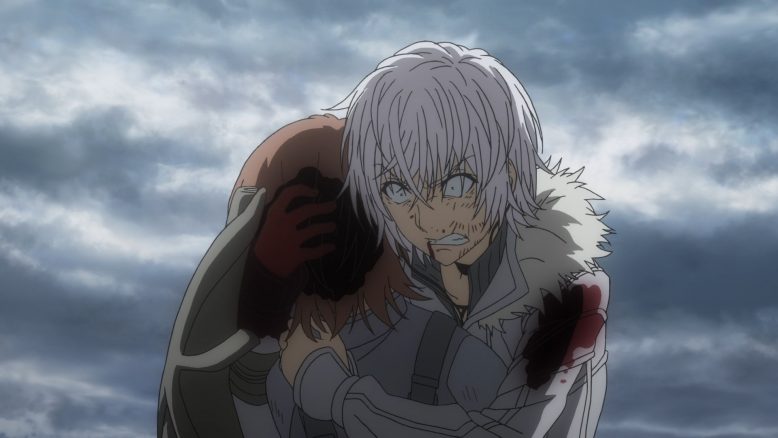 And while I’m not sure if Accelerator will actually succeed, or if he can “prove to the smug Academy City” that he’s worth more than just a killing machine, I sure as heck want him to. This level of investment in what’s going on in Index Season 3, well I don’t think I’ve really felt it until this episode.

I’m not sure what that says about the season as a whole, that the show is actually hitting a level that the franchise has only ever reached with the Railgun S series’s first arc at its 19th episode, but well, we are where we are. This episode, whether it was worth slogging through the majority of Index III or not, is one of the highlights of the entire Index franchise and perhaps this anime year. And, man does it feel good to just praise, talk about and geek out over this show and franchise again. 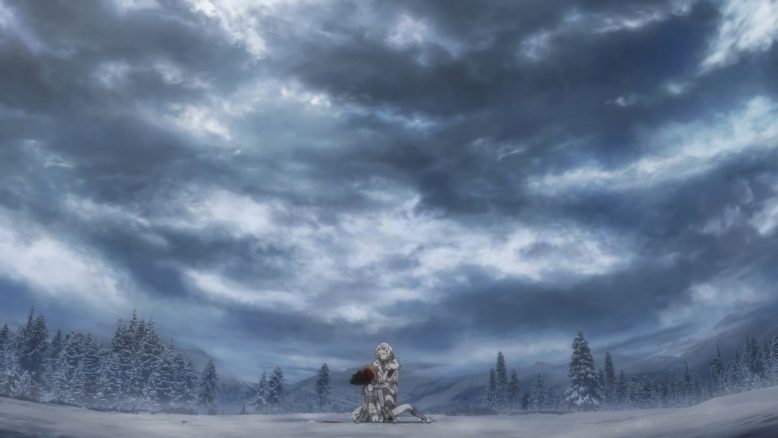 Hopefully the rest of this final arc can continue to deliver the goods, even if the journey to get here was a bit rough, to say the least.

Note: An S Grade episode is an episode that does something to truly exceptional, and its the highest grade that we give here at Anime Evo (Above an A+). Only a few episodes in a few shows have ever managed to achieve this, so if an episode is ranked as an S Grade, then the reviewer/writer believes it is something truly amazing and special.