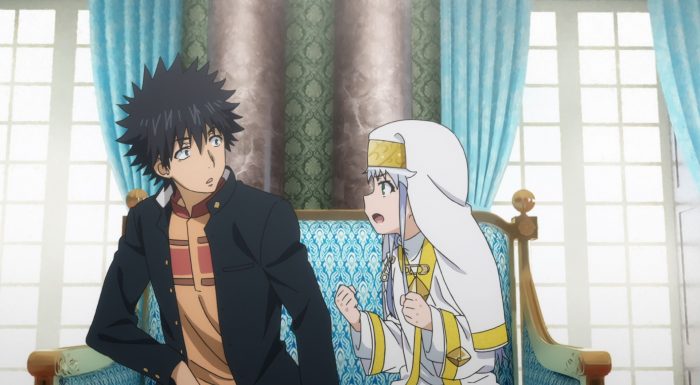 Color me surprised, but I’d say Index III has kind of found its groove and is consistently good now. There’s certainly an element of ruggedness to the overall pacing here, but the story as a whole is coherent, understandable and above all else, entertaining. I’m not sure if the first two arcs of the season was the production staff basically working out the kinks, or having to pick up after season 2’s failures, but its certainly interesting to see Toaru Majutsu no Index III get closer and closer to the franchise’s peak. 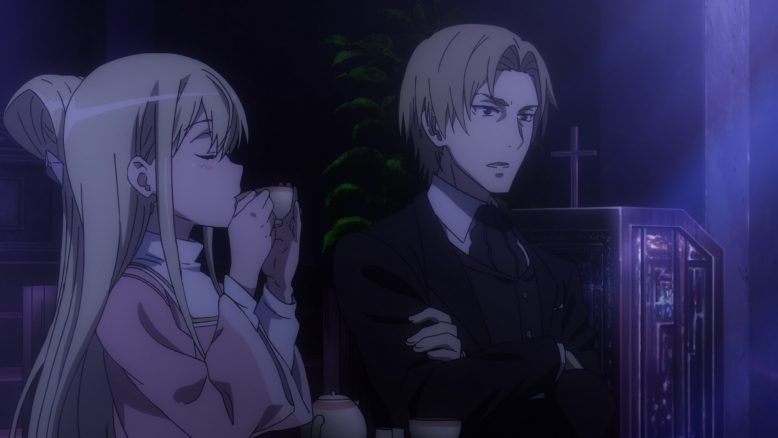 The biggest proof of this improvement, I think, is the fact that this latest arc is now squarely focused on Europe and Not Academy City, and yet its just as riveting and interesting as anything else we’ve seen from the franchise thus far. And I suppose I should mention before I go any further, that my not covering this series last week (when this episode aired) had absolutely nothing to do with my like or dislike of the show, but rather because I was just moving apartments and didn’t have the time to watch any anime, let alone write about it.

With that said, I actually am rather impressed by how Index III is keeping me interested in things that I generally don’t dig about the franchise; non-Academy city stuff. I do remember, that back when Index originally began, the show and the franchise was more or less about the sort of stuff we’ve seen from Touma recently, Magic and myth. While the RailDex universe as a whole is about both science and magic intersecting, its quite clear that Touma’s side of the equation has more to do with magic, while characters like Misaka and Accelerator handle the sci-fi side of things. 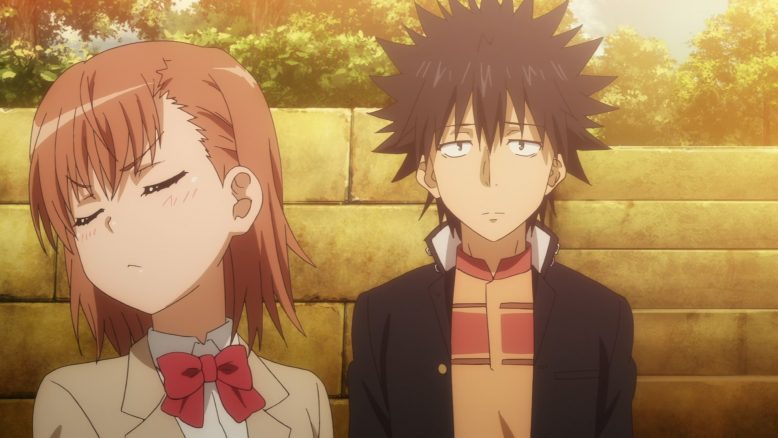 Its also worth mentioning that most of the franchise’s fans actually prefer and like the science side of the franchise (Railgun S being a huge reason for people even getting into this franchise in the first place). I, however, have always been in the minority and enjoyed the Touma/Magic segments more, especially when its been less about mythology derived from religion and more about just general mythology being meshed and adapted from all the different cultures in the world.

Now, while its the 11th episode that gets into the meat of the arc and its whole magic theme, this 10th episode of Index just a wonderful job of just throwing us right into the action. See, I mentioned in the post for the last episode, that Index III seems to be more successful when it actually focuses on simple stories, and I’d say that this week’s airplane/SkyBus terrorist story was another one of those simple success stories. 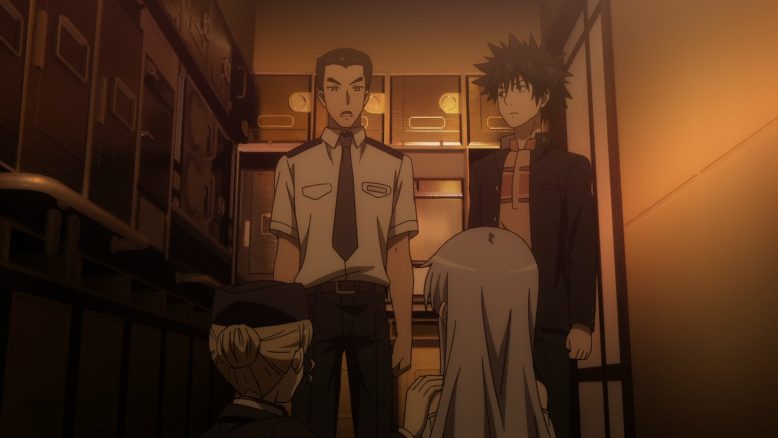 Touma and Index basically running into trouble while on their way to England, just screams the classic Touma luck at play here. Overall, the story is pretty entertaining and keeps you on the edge of your seat. First there’s the whole issue of finding the first terrorist and then the thing goes a step farther by adding a second one that Touma has to track down and stop. And all the while this whole thing is happening, the show organically explains the larger context of the overall conflict that’s taking center stage in the Index world right now; the fact that France and Britain seem to be squabbling among each other while the upcoming Roman Church issue is looming just across the horizon.

This is the Index I remember, the show that was able to both keep you entertained and excited, while also doing a great job of organically developing the world and larger franchise story. I mean, as Touma solves his latest crisis and makes it to Edinburgh safely, the show finally focuses in on the “New Light” and sets up the four girls that are going to be the main antagonists of this upcoming arc. 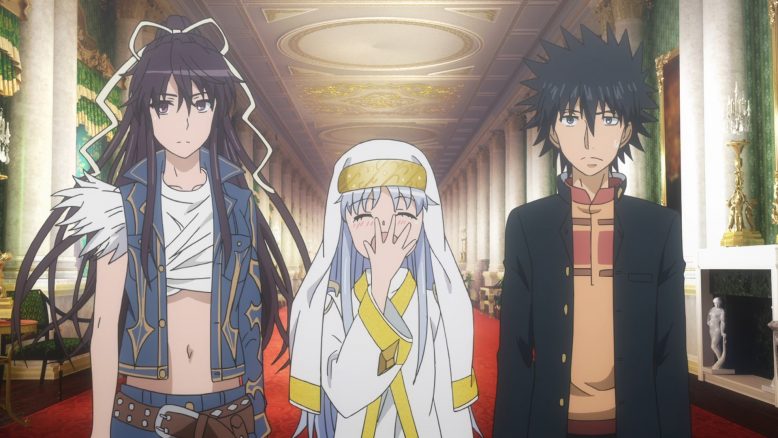 Or so it seems. As we actually dive into episode 11, things are really turned on their head as the show kicks the arc into high gear. The show makes a lot of strides in really improving the setup for the overall franchise, and actually makes the magic side of the equation a lot more engrossing.

One of those things, is most certainly the development of the European part of the Index world. If there was ever any doubt that Index takes place in an alternate world, then I think its pretty much washed away by the introduction of characters like Queen Elizard and the rest of England’s Royal family. While the rather comical representation of the Crown in England is sure to offend some people (particularly people from England itself), I actually found this rather funny off quilter depiction rather endearing. 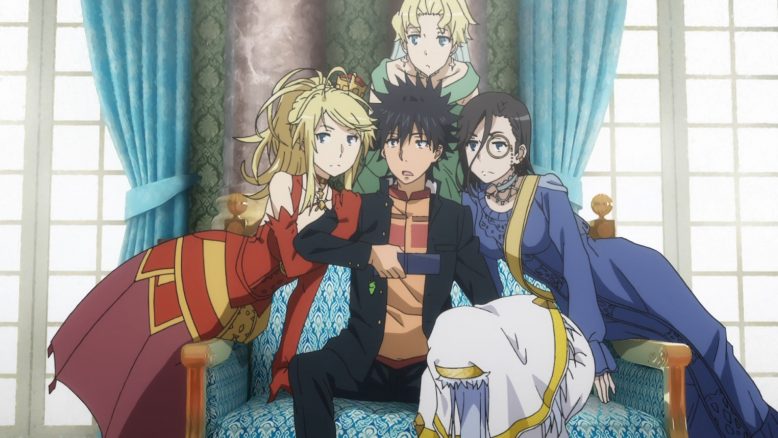 The comedy in this episode, really worked for me, whether it was the weird selfie scene with Touma and the princesses, or the Queen herself being friggin tackled by one her closest attendants. This kind of sillyness can really only work in a world like Index, and I’m glad to see the show hasn’t taken itself too seriously after all the magical mumbo jumbo its been pitching at the audience lately.

Of course, it wasn’t just new characters that we got to see in episode 11 either. As Touma and Index split off to help England in their own ways, Touma ended up joining up with none other than Oriana Thompson. You remember her right? She was the fan servicey villain of Season 2’s Academy City Student Festival arc. She works decently well as a redeemed anti-hero this week, and I rather enjoyed her banter with Touma as the two pursued the “New Light” group. 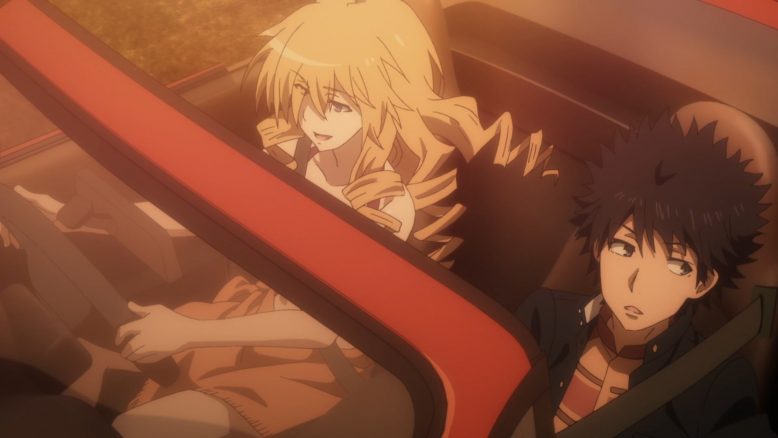 Of course, despite Touma and the rest’s best efforts (they’re able to take down 3 of the four girls), the New Light group ends up successfully accomplishing their goal, and they end up transporting a rather important item to their leader. The item in question, is actually the original version of a sword that has been passed down in the Royal Family for generations. The leader? Well, its actually one of the princesses who ends up staging a coup and a rebellion at the end of the episode.

Which, honestly, is a pretty surprising and unexpected twist. Its the sort of thing that Index’s Third season hasn’t really done thus far, and I have to say I’ve sorely missed being amazed and impressed by the show like this. A big part of why it all works, I think, is because the show really keeps things simple and easy to understand. The story here is a simple one, much like episode 10’s and the previous arc we just saw. 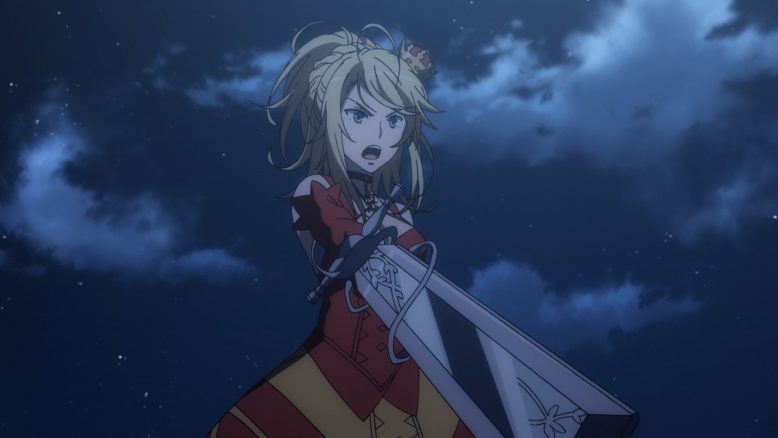 Simple, fun, entertaining, surprising. These are things that I’ve sorely missed seeing in To Aru Majutsu no Index III, and its kind of awesome that the show has gotten its groove back and is kind of firing on all cylinders.

To close out this post, I’ll just apologize for how short and terse this double episode post really is. I’m still trying to catch up on series and blogging things after being so busy with moving apartments this past week. Things are starting to calm down as we head into the holidays, so I expect to have a lot more time to cover Index III properly moving forward. See you all next week, on time, hopefully!