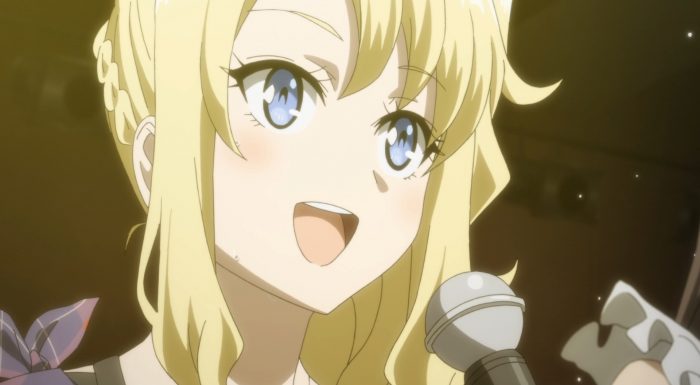 If there’s anything to take away from this arc it is that Mai is awesome and can do anything. This isn’t a new revelation, but it is definitely what I’m taking away from this whole incident. While you had Nodoka dealing with a lot of emotional struggles, Mai was just getting to work and dealing with it. I suppose it shows both her natural talent and dedication. Mai has that kind of scary combination of gifted abilities and the willingness to work incredibly hard. While some might work hard to make up for a lack in natural ability, Mai just uses hard work to sharpen herself even more. It had to be a rather painful moment for Nodoka to see Mai take her place and earn a center position for her group’s next single. It’s not easy to match up to someone like that. 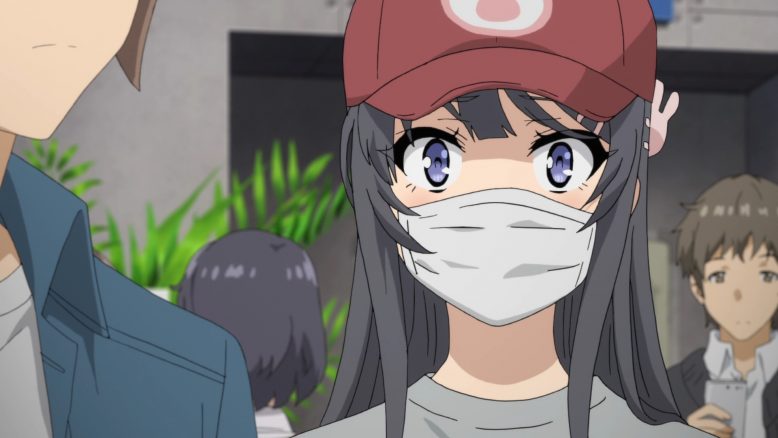 Really this episode had some fun moments and a lot of that goes to Mai. She had some very smooth or hilarious moments even in an arc that is technically more about her sister than herself. That concert scene with her catching the mic, continuing to sing, and passing it back without missing a beat was really great. It’s just a reminder of how Mai is such a professional. Just no wonder that ‘Nodoka’ got an upcoming center spot in her group’s next song. Even if she looks like someone else, Mai is something special. And it also applies to that whole slapping scene. I love both that Mai lost her cool, but also had enough of it to hold off from slapping Nodoka. Unfortunately for Sakuta…he kind of ended up taking that slap as a ‘compromise’. It’s too bad for Sakuta, but that was kind of hilarious. 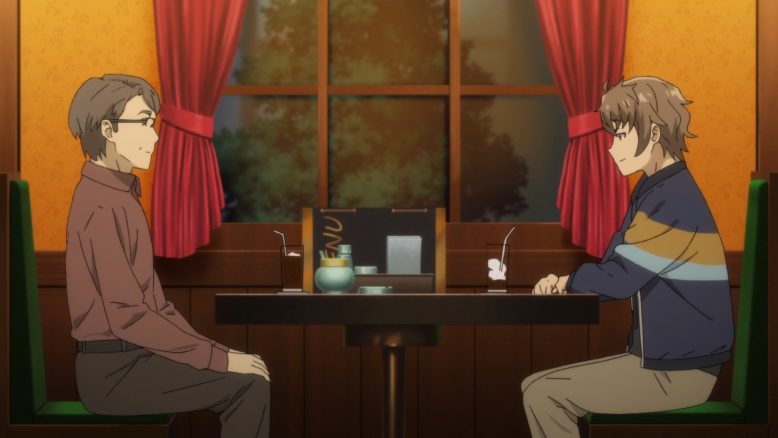 This arc has been all about how family is complicated. It just isn’t easy to nail everything down sometimes. I honestly wouldn’t have been surprised if Sakuta was pissed at his parents. Yeah, they add some extra information about his mother needing to be hospitalized which gains some sympathy points. But in the end Sakuta and Kaede’s parents essentially relinquished their responsibilities as parents and put it all onto Sakuta. You know, the kid hospitalized from his own injuries that lead to intense rumors spreading about him. And things are a bit awkward even at this point. It says plenty with Sakuta’s father calling up Sakuta to meet him for dinner somewhere. He can’t even go to his own place and see his daughter? The father doesn’t feel like a bad guy though and Sakuta doesn’t appear angry. It’s all just difficult and tricky. 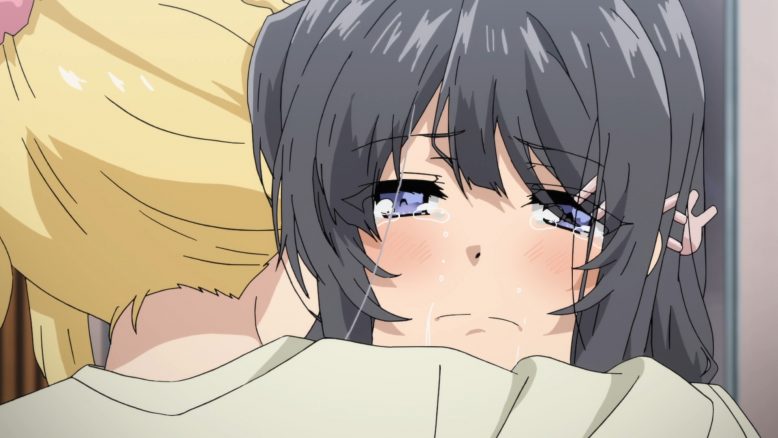 That situation is straight up healthy though compared to Mai’s family. We already know how irredeemable Mai’s mother is. She took on the role of her daughter’s agent and against her wishes putting her up for that photo session. It doesn’t appear that Mai and her mother are anywhere in the realm of patching that relationship. Nodoka’s situation is slightly less terrible, but who knows. It just appears as if Nodoka’s mother isn’t as willing or able to play the role of an agent. Instead she just pressures Nodoka. Even if the story tries to throw out a “well maybe she is uneasy about the pressure she’s put on her daughter” I don’t think that’s good enough to grant her a pass. And honestly I like the idea of Nodoka moving in with Mai. She does look up to her sister and should have a more comfortable time. 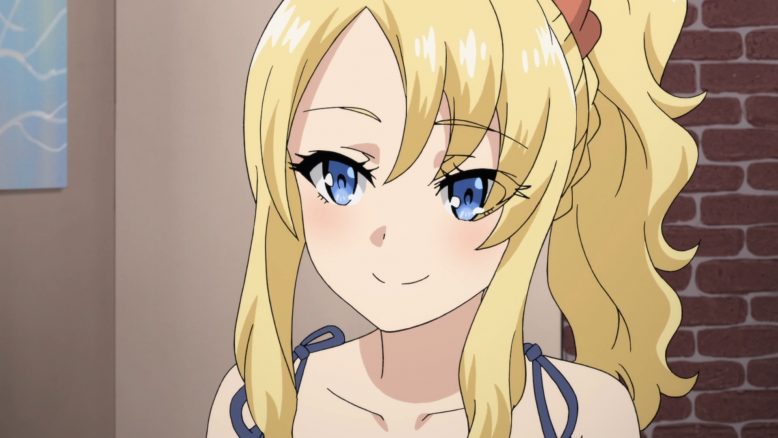 I can’t be the only one who found the sound effect used for the girls turning back to themselves as creepy. It sounded as if something was breaking there…Although I suppose that’s entirely possible. Mai and Nodoka are of different heights and there are bound to be a few physical differences. Just suddenly switching bodies would require bones shifting, growing, shrinking, etc. I will admit that’s probably one of the more unusual ways to tackle body swapping. Usually it is straight up just minds/souls switching bodies. Instead it was more that their bodies straight up morphed into each other. That’s pretty out there, but I suppose so is the idea of conscious minds just jumping into different bodies. Guess it’s somewhat of a comfort that Mai’s body was never in danger in this episode XD. 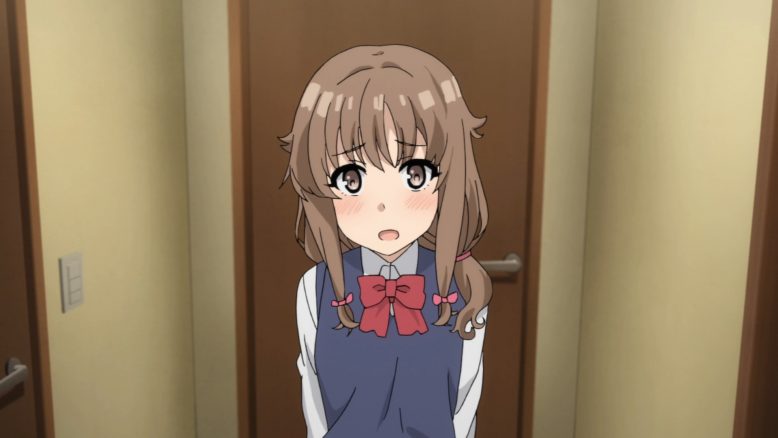 We are heading right into what should be the last arc of the show. They’ve hinted at Kaede growing throughout this show and it makes sense that she’s trying to push herself. Kaede doesn’t want to be stuck in place forever either. I’d like to think having Mai around has pushed her more to challenge herself. It is easy to sit in one place when nothing changes and you are comfortable. Sakuta of course didn’t want to push Kaede and see her get hurt again. And things are going to get tense if Kaede’s version of adolescent syndrome kicks in. A lot of these cases have had stressful elements, but someone physically getting beaten due to reading abusive words directed towards them…that’s frightening.

Along with that we’ve got yet another challenge for Sakuta and Mai. Not too shocked that someone would get pictures eventually. Although in this case it was Sakuta and Nodoka while she looked like Mai. But there’s no ease in explaining that so Mai will just have to take the hit. While this is a problem…I can’t help but feel it is one they had to face anyways. Mai wasn’t interested in dropping her relationship and even the ban on public dates couldn’t last forever. Eventually Mai and Sakuta had to face this situation and deal with it. I mean Sakuta had a school-wide confession in the first arc. Even if they didn’t date in public how long until rumors of that incident go out? Toss in that and probably some issues with Shoko (who was low key in this arc) and we’ve got a busy last few episodes.