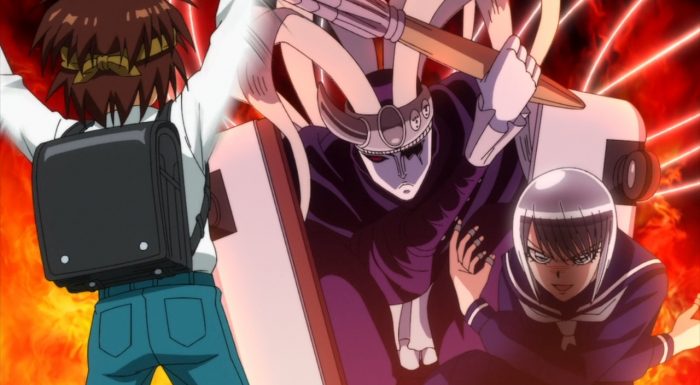 This episode was a good chance for the show to breathe a bit after such an intense first few episodes. Both the story and the characters needed time to deal with all that had happened. It isn’t surprising that there was a small time skip just to allow Shirogane and Masaru to physically recover from their injuries. That arc was pretty brutal to the both of them. People were knocking around Masaru quite a bit and even Shirogane suffered fairly significant injuries. Of course not every wound can fully heal and that goes for the emotional ones. We saw in pretty shocking terms the state Masaru was left in. This isn’t the kind of show where the lead goes into the hospital and pops out without any visible issues. Masaru is brutally scared from his experiences in the first few episodes and is a different person because of it. 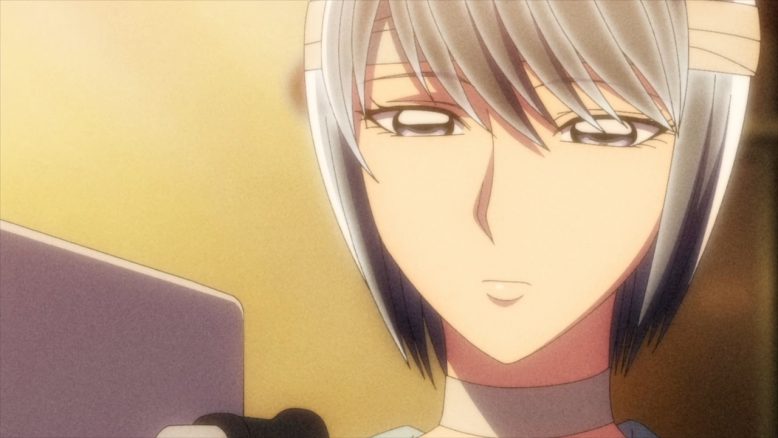 Of course the emotional wounds are serious for both Masaru and Shirogane. It’s sad to see Shirogane take some steps backward because of what happens. She is feeling things more, but she won’t allow herself to smile from the bottom of her heart. Her inability to do so when it was needed has stuck with her. As long as Narumi isn’t around we are going to see Shirogane continue holding herself back. It’s understandable how the guilt would eat at her and it’d be tough to move forward. All the more so since there was nothing more than an arm left behind. They had to presume him to be dead, but hard to just move ahead when they’ve got such emotional baggage. 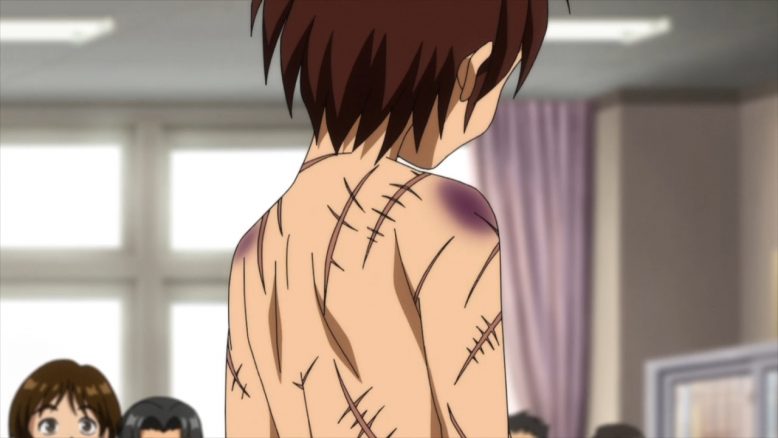 Masaru has been through too much

It won’t be easy for Masaru either who lost someone he idolized. I am proud that he’s trying to be more like Narumi and follow the things he told him. In a lot of ways I can agree that standard bullying would appear downright adorable compared to what Masaru went through. For me the thumb tacks would have made me lose it, but I suppose even that is just a minor annoyance for where Masaru is right now. And it isn’t as if he just doesn’t care, but he’s desperately trying to be more like the person he looks up to. With Narumi presumed dead he’s all the more desperate to not slide back into the person he was before. If he doesn’t carry on towards being more like Narumi then he’d have died for nothing. And there’s just no way Masaru will allow that. 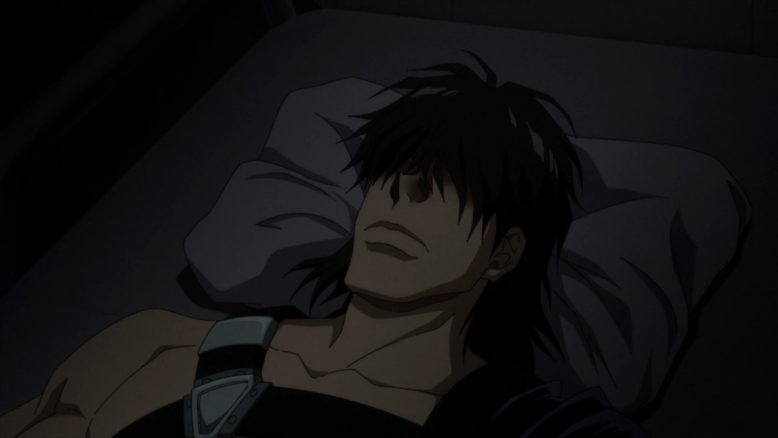 Of course need to get past the presumed and focus on the last few seconds of the episode. They really held off on revealing anything about Narumi’s situation for almost the entire episode. For me I’m thrilled to see that he’s still alive. There was just no telling whether they were willing to straight up kill him off to catapult character development forward for Shirogane and Masaru, or if he’d survive. It’d be a tragic waste to lose such a good character in the first few episodes of a 30+ episode series. And as we can see from the limited view…he’s not fine. This is months later and he’s still unconscious in some sort of creepy location. And even if clearly someone set him up with some sort of prosthetic arm…he still lost his freaking arm. That’s not a small loss.

We don’t know where he is, whether he’s ok, or who may have placed him in that location. Clearly Masaru believes Narumi is dead so I can’t see it being a friendly person behind this. We could easily go the hostage route or some sort of brainwashing him into an enemy soldier kind of thing. Nothing would shake up Masaru and Shirogane more than Narumi returning (initially) as an enemy. But for the time being all we can do is be glad he’s alive and see what the story does with him next. 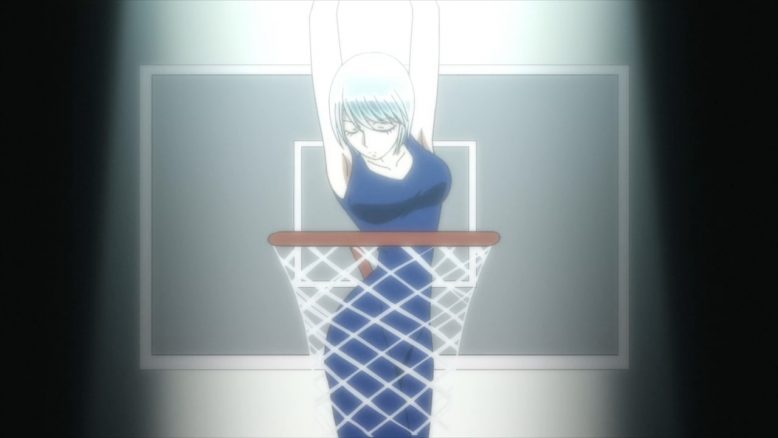 Not standing out at all…

I wish good luck to Shirogane on her plan for avoiding standing out. That girl is probably already the most famous and popular girl in school after about a day XD. Nothing she did from her apology in the class to…what she did in gym was quiet or easy to ignore. I’m sure she’ll run into problems from those jealous, but it would be nice to see Shirogane build up some normal friendships as well. At this point Shirogane needs the most time to grow into her own person and not the weapon she was made into. Masaru should be pretty well ok as things stand. I don’t think people will bother messing with him after the scene with his scars and heck he even as a potential love interest. Although considering how young Masaru is I don’t think the show will dwell much on pairing him up. 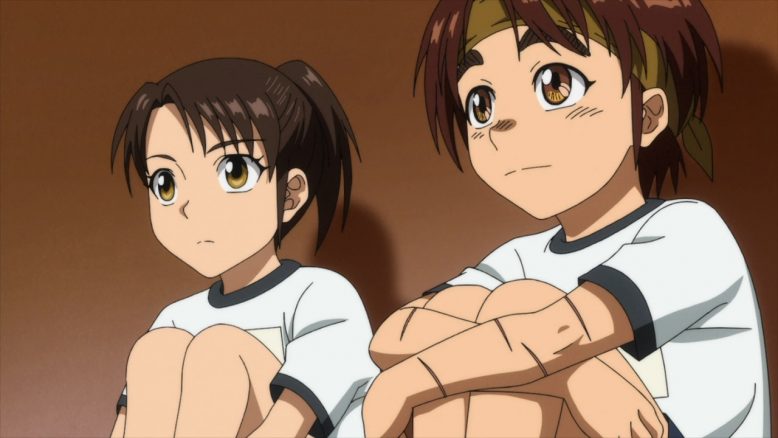 This was the least action packed of the episodes thus far. It could have kept up though if Shirogane decided to actually attack the students bullying Masaru…But the show needed this episode. We can transition a bit to a point where Masaru and Shirogane are both going to school and they’ve had time to heal. Shirogane potentially working at this troubled circus could be interesting as well. Sooner or later though some sort of threat is going to make a move. It would seem the situation around Masaru’s inheritance cooled down with that last big fight and him revealing the plot to the puppeteer clan. But the story isn’t likely to stop here. Guess we’ll see what happens in the next few episodes.