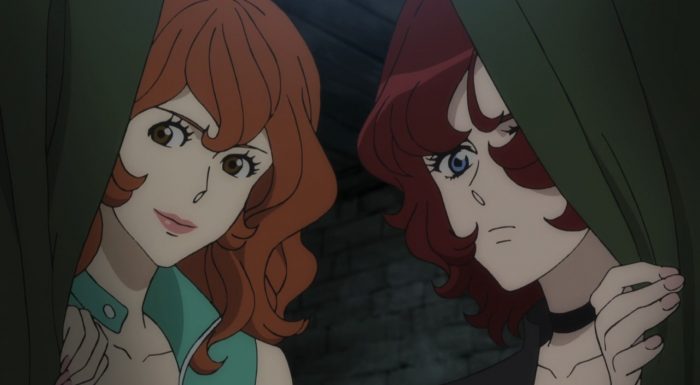 I have to say, this arc is definitely presenting Mine Fujiko in an entirely new light. I don’t think I’ve ever seen the character as badass and as interesting as she’s been shown in the current arc and story. As I mentioned in the post about the last two episodes, a big part of this arc, and this series as a whole, has been centered around the relationship between Fujiko and Lupin. The show has, uptill this point, done a fantastic job of building a sense of intrigue and excitement surrounding these two characters, and the apparent schism that’s formed between them. 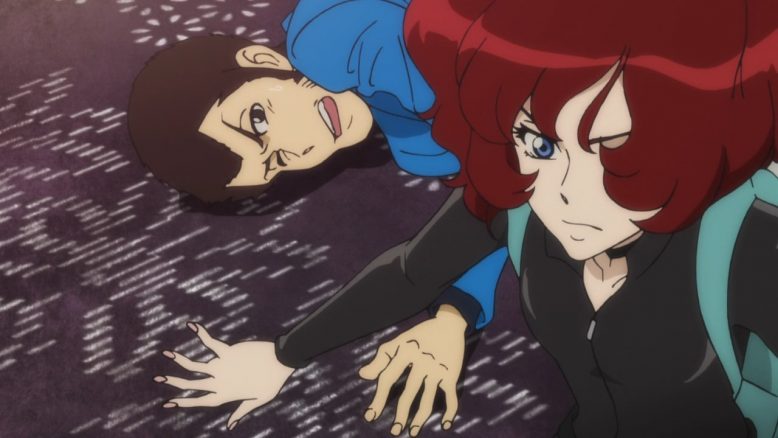 This week doesn’t break the case wide open, but it does give us some key tidbits to chew on, as the story moves forward. Now… I mentioned in the last episode post that a sort of interesting dynamic had formed between franchise newcomer Ami and Fujiko. We saw that dynamic play out when the terrorists broke into Ami’s school, and we see it again here when Ami arrives in Padra to try and rescue Dolna.

Taking a look at Ami for a second, its certainly interesting to see how that character has evolved since we first saw her. Ami started out as little more than a device to pry into Lupin himself as well as his relationship with Fujiko. Over the course of the first arc, however, Ami changed into a character that’s since become one of my new favorites. Its because Ami is starting to feel, grow and change by the events that she experiences. 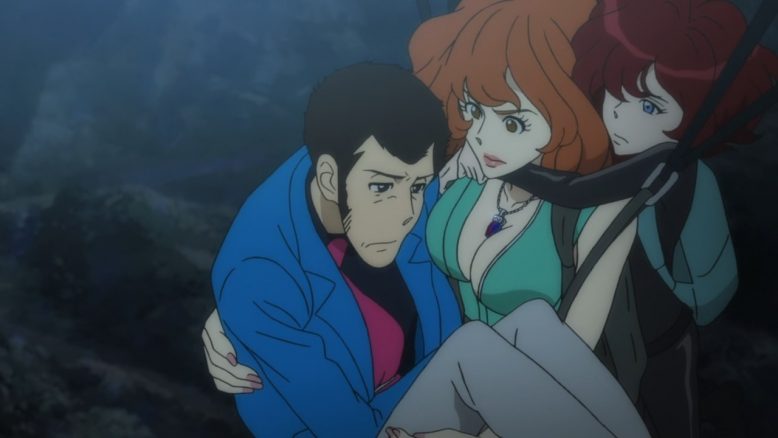 Ami making her first friend in Dolna, and then rushing to save her? That’s cool stuff. Equally interesting, is Ami’s sudden fascination with Lupin himself. It makes sense why she has feelings for our main lead. Lupin not only saved her life multiple times, but actually changed her entire life and world. He’s both a supportive older figure, a mentor and someone that’s frequently in those “hero” positions that young kids often grow up reading about. So Ami having feelings for Lupin definitely works, as does her apparent derision of Fujiko.

Ami doesn’t like Fujiko because she feels a certain jealousy regarding Lupin’s affections for her, plus the fact that she thinks Fujiko is extremely selfish and self serving. What’s interesting, however, is that unlike what we’ve seen from Fujiko throughout the years, the woman doesn’t actually deserve any of the disdain that Ami throws her way. 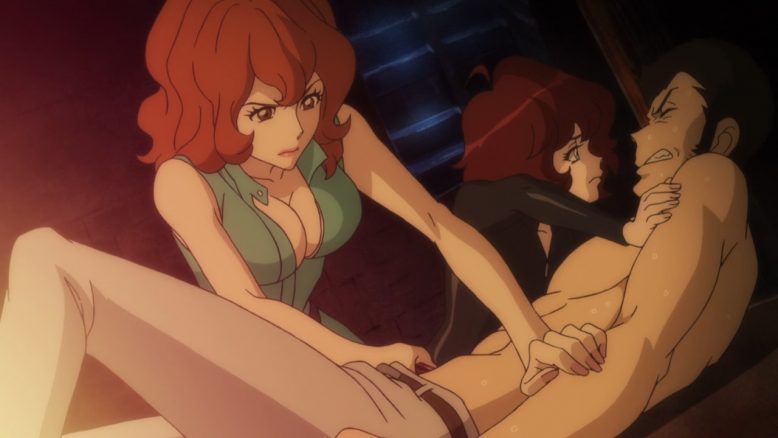 In one of the most fascinating role reversals ever, its Fujiko that ends up not only saving the day, but actually brisking Lupin off to safety alongside Ami. And I have to say, Fujiko has never seemed more capable and in control than how she is this week. Fujiko’s actions and abilities this week, really put the flashback episodes into perspective. 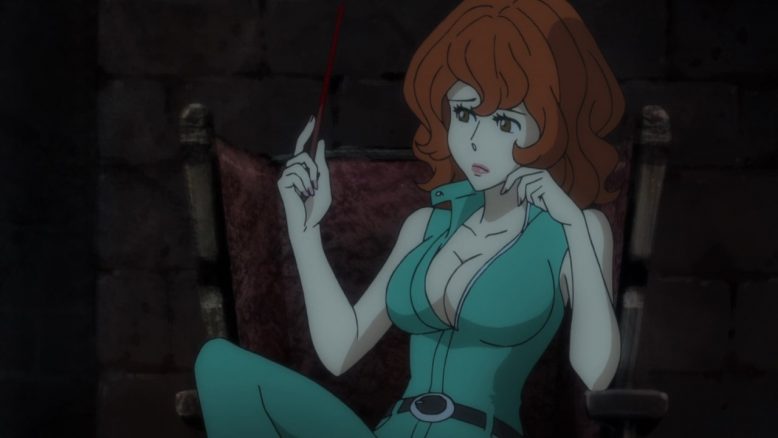 This isn’t the Mine Fujiko we’re familiar with. She’s not the buddy chummy comrade of Lupin’s, nor is she the selfish vixen that manipulates and double crosses him for her own gain. We’ve seen both of those versions of Fujiko in the previous flashback episodes, and she’s clearly someone a bit more evolved and different here. It seems that since we last examined Fujiko and Lupin, Fujiko has since grown into a master thief herself, with none of the apparent weaknesses that we saw from her in episode 11.

It seems that after Fujiko found herself isolated from her three inhuman male friends, she had to basically go out on her own and develop skills that she could use herself. Fujiko still uses her feminine charms to her advantage, but she’s a skilled chemist, spy, warrior and doctor as well. Its this version of Mine Fujiko that I think the series written by Okada Mari (A woman called Mine Fujiko) tried to get at. I’m not a huge fan of what that series did, but I’d say that THIS is the version of Fujiko that’s likable and darn interesting. 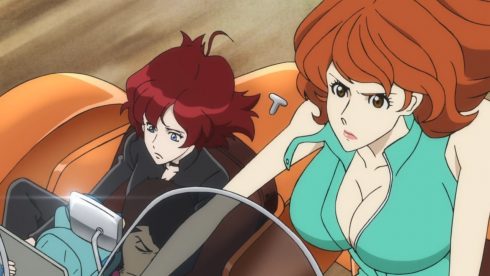 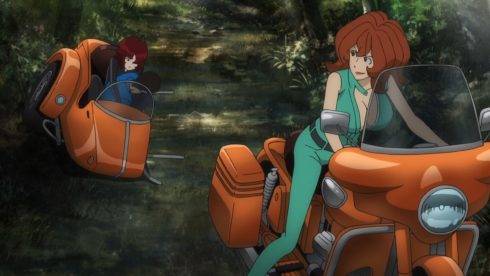 I mean, Fujiko isn’t just capable, she’s heroic and mature here. She saves Lupin, risking her own life, she’s mentoring and guiding Ami, and on top of that she basically puts herself in harms way in order to try to save the injured Lupin and naive Ami. She does that, and she gets a string of insults thrown her way, by an Ami that’s clearly misunderstanding the situation.

And there’s another thing. You know that one side romance that has had Lupin chasing Fujiko for so many years? Well, it actually felt mutual here. Fujiko and her actions, definitely show that she actually really does care for Lupin. Its something that I didn’t think this franchise could’ve ever sold me on, but that seems to be the crux of the issue here. When Fujiko asks Lupin what she “is to him” and he hesitates? Well, it means that something serious has gone down between the two of them. 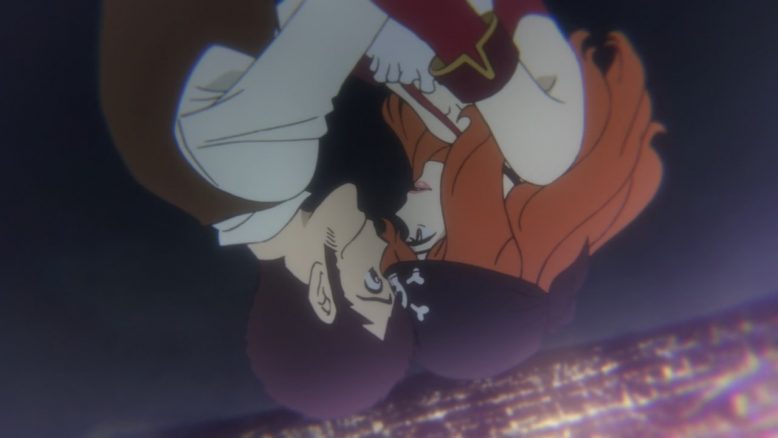 My guess? The two grew up and the dance between them got as old for them as it has the audience. If anything, what this arc and this story is really bringing me towards, is the idea that Fujiko and Lupin actually do make sense together. After years of the franchise abusing Fujiko as the selfish fanservice model, she’s gotten a story arc that really does the long standing romance btween her and Lupin justice.

I’m curious, more so than ever, as to what went down between these two characters. As Ami quite rightly notes, Lupin is still very much in love with Fujiko, and it surprisingly seems like Fujiko is in love with him as well. Which, wow, that is the most daring thing I have ever seen from this franchise. Lupin’s interest in Fujiko was always one-sided, and it never seemed like Fujiko was actually going to be interested in him. But you know what? Maybe Lupin and Fujko do make sense, and do work well together as a pair in some ways. 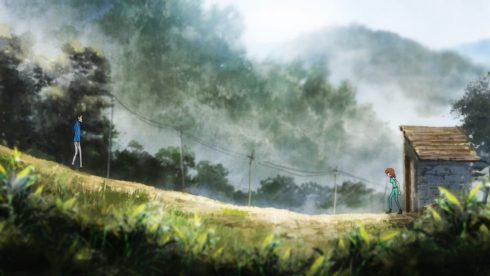 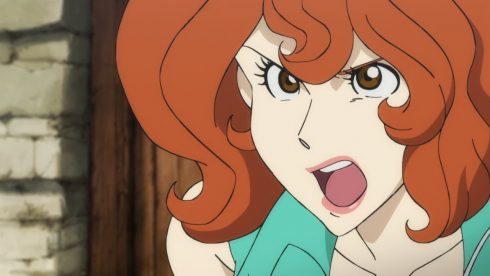 At the same time… In other ways… Its hard to imagine the two of them actually working out. Regardless, it seems like the two of them did try to make it work. What happened after? Did Lupin and Fujiko try to be together for real? And did it just blow up in their faces? Whatever the truth of the matter, there’s definitely some serious unresolved issues between these two characters, and smack in the middle of it all is Ami. A young girl that’s just starting to understand the world, and she just happens to be crushing on a guy who’s clearly madly in love with another woman.

That’s a harsh life lesson, but I do commend Ami on being mature and noticing the signs. On the flip side, we have Dolna of course, who’s gotten infatuated with CIA Agent Ugo, and has created a personal love story out of a rather serious Civil War situation. I get what the show is trying to do here, its showing how both Ami and Dolna are young women who’ve just fallen for the wrong guys. The problem of course, is that Dolna as a character has shown to be nothing more than an idiot. Her suddenly trusting Ugo (a trained CIA Agent) and basically going on this long, impractical mission to “save her country…eventually?” is just cringe inducing. 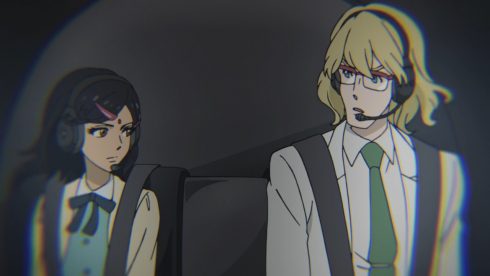 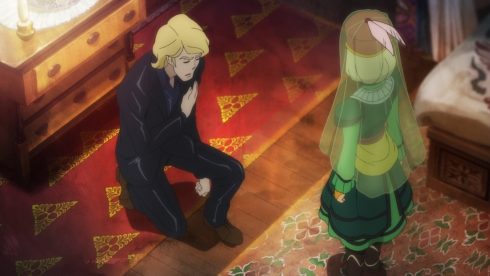 I get Dolna is not a character that you’re supposed to like, she’s more or less an excuse to get Ami, Fujiko and Lupin into a particular mess where the three join together and interact. I get that, I do, but I really wish this show were doing something a bit more original and interesting with Dolna and her fictional country of Padra, given how much time and effort its dedicated to the whole thing.

In the end, the same things that I mentioned in the last two episodes, is true now. The show is doing a remarkable job of exploring Lupin, Fujiko and Ami, and its doing a bad job of this whole Padra civil war story. Thankfully, this week shifted the focus onto the characters we (or at least I) care about, so that was most certainly a positive. 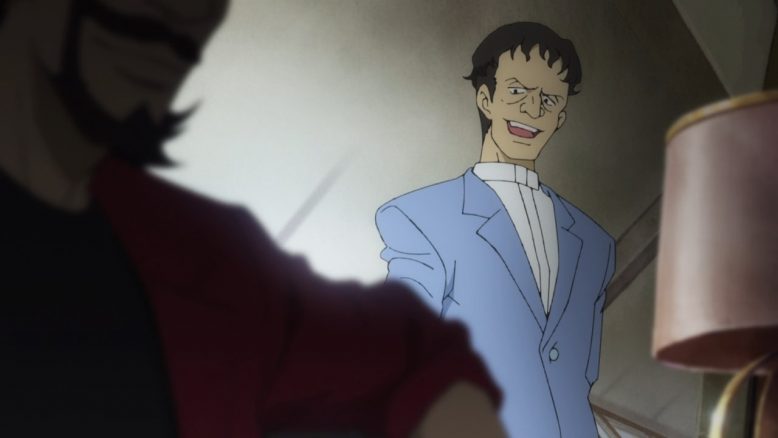 The lingering question then, is just how far the Lupin/Fujiko story is going to go in this arc. My suspicion is that the current story arc is going to wrap up next week, with the rest of the show perhaps focusing on this Enzo character and perhaps this growing romantic plot thread between the main duo. Either way, I suppose while this hasn’t been the show’s finest hour, there’s been more than enough to generate interest and keep things exciting. That’s still an overall win for Lupin III Part 5, in my book.