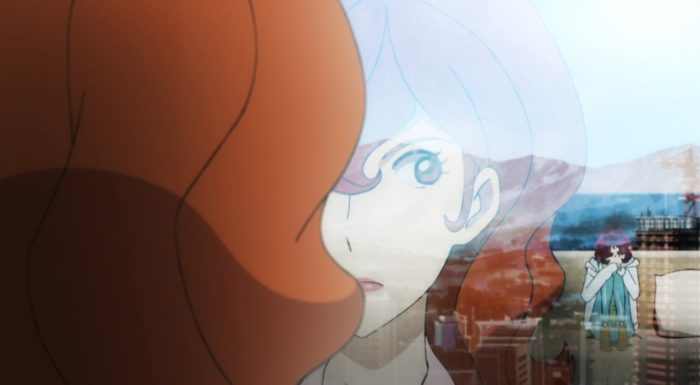 There’s a lot to love about the current arc of Lupin III Part 5, sure, but with all the good comes a string of mistakes that point to the show buckling under the sheer weight of the ambition of it all. Lupin III Part 5 is the first time the franchise has refused to play it entirely safe, pushing the boundaries of what’s possible in such a long running franchise. It goes without saying, therefore, that when you’re brash and risky, there’s bound to be times where the gambles and the risks don’t pay off. 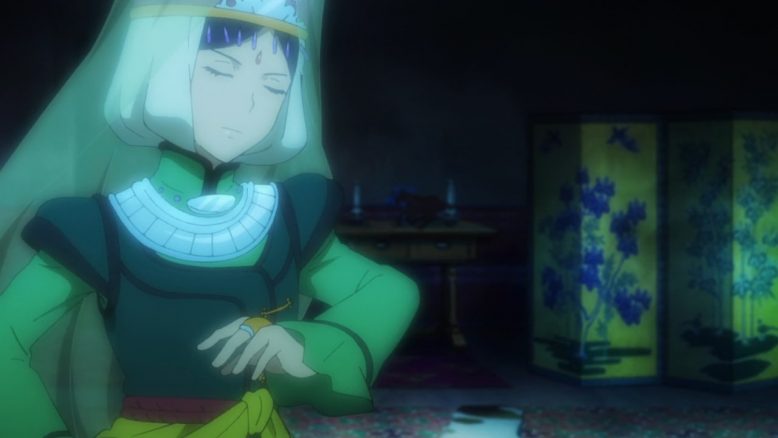 In the case of Princess Dolma and the current Padra country arc, I’d say there’s a mix of both real success and a decent chunk of less than elegant missteps. Its strange because if there’s one thing to really fault about this current arc, its the fact that it just tries to do too much, without perhaps having the nuance or the skill to actually pull it off.

Um… Let me step back a bit, at least for a moment. Its worth noting that these two episodes (which more or less serve as the setup for the current arc) definitely have the general feel and formulla of the rest of this series down. The character dynamics and exploration of the more classic elements of the Lupin the 3rd franchise as a whole is still there, and its still as interesting and as exciting as it has been since the very first episode. The re-inclusion of Ami into the story, plus her interacting with Fujiko has certainly led to some interesting questions and concerns bubbling up to the surface. I’ll talk more about those in another episode, since we’ve only seen hints of what I’m sure is going to be a major focus in this arc later. 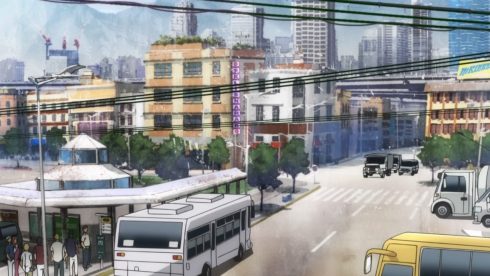 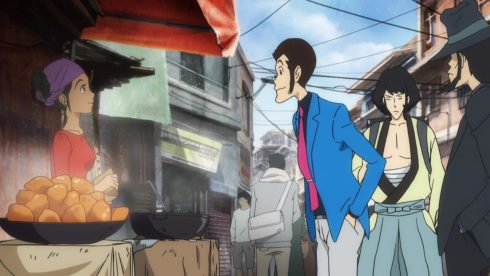 But, having said all of that, the stuff that doesn’t work, really does stick out like a sore thumb. The bad stuff, as it were, has a lot to do with the fictional country of Padra, its princess Dolma and the overall world building regarding these two elements. See, Lupin III, the franchise, as a whole has always been grounded in a sort of fictional, pulp action movie version of reality. There’s an almost western action film like feel to a lot of the Lupin III movies, and that’s been totally true of both the 2015 series and this one.

More often than not, it kind of works, since the almost James Bond-like plot and themes make for an interesting exploration of Lupin himself and how much freshness he brings to the tried and true. Lupin has always been the element that I think makes these “been there, seen that” storylines feel entertaining and somewhat original. Yet, in these two episodes, the show almost unwisely limits Lupin to a side note, while focusing more on Dolma, Ami and Fujiko. 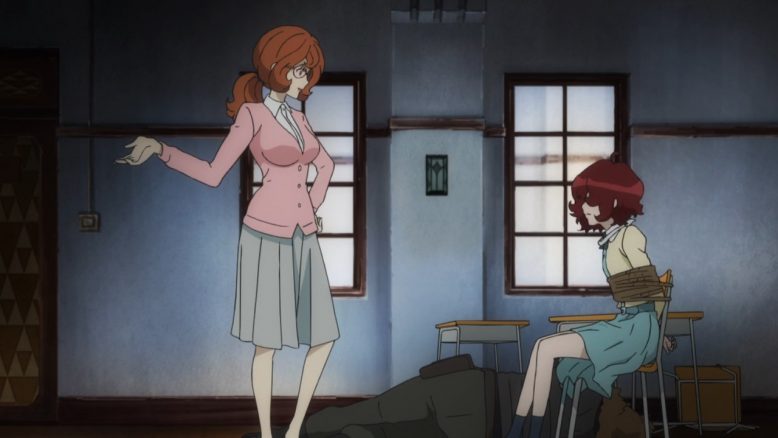 The Ami and Fujiko stuff certainly works, and as I mentioned before, there’s a lot of interesting stuff there. What doesn’t work for me, is the whole story of Alma being a collection of “foreign princess” cliches all mashed into one character. She’s a princess that’s both some kind of warrior tribe princess, and some kind of Japanese version of a princess in India. This mix, instead of creating something interesting, just kind of makes a character that feels very generic, uninspired and uninteresting. Its a low point for this show, which has basically used cliches and tropes of popular film and media, to great effect recently.

The country of Padra doesn’t fare much better, which features a mishmash of India, the Middle east, war torn civil war countries and even China. This fictional country has a “Technology heavy modern side” paired up with a “old town, traditional side” to it. Its got Samosas (An Indian food), its got telecommunication companies, its got a Monk like religious figure taking on the government, and its even got the US and the CIA trying to create a puppet government, not to mention a corrupt military that’s trying to overthrow a king. 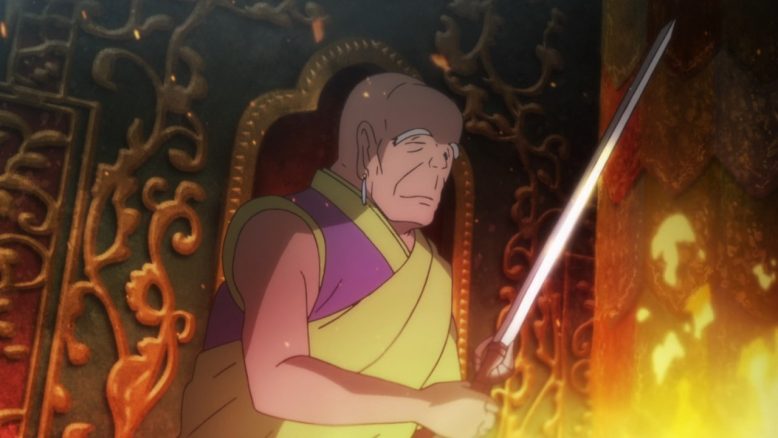 That’s taking a lot from either recent or current world situations, but mixing them together in a really almost ignorant and half-assed way. You can see that the show’s writers are trying, really trying to link Lupin’s story to real world events, and then almost elevate the story to become some sort of commentary.

Heck, there’s even a scene where Lupin basically berates the CIA operative (a guy who’s named Ugo) about how the USA basically does whatever it wants under the guise of peace, for its own benefit. How the country with its wealth and superior military, is basically worse than a thief like him. And look, I’m not saying what Lupin says isn’t true (although I’d say that all countries adopt a very selfish, self-serving form of foreign policy), because it most surely is. What I am saying, and what I do have a problem  with, is the fact that its Lupin III, the loveable gentleman thief, that’s going on a preaching tirade that feels so out of character. 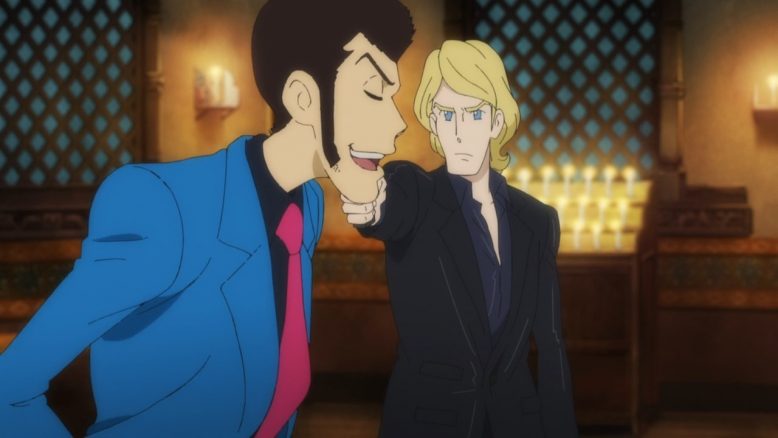 Lupin wouldn’t bother with a speech like that, he wouldn’t care enough to share it, and he’d just basically make a joke or something and move on. Lupin definitely understands the modern world, but he doesn’t pretend to have the moral high ground just for the heck of it. Its one thing if Lupin uses clever words like that to distract an opponent, but Lupin used the whole “Dog of the CIA” thing immediately after, which was a lot more effective anyway.

That’s to say nothing of the whole Princess becoming a figurehead story, and ultimately turning on Lupin and Ami herself. There’s obviously some kind of reason for why Dolna is doing what she’s doing, but I can’t help but feel that it just isn’t that strong of a story. 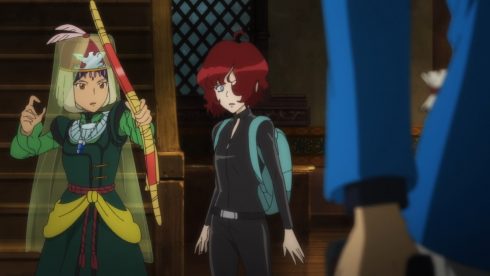 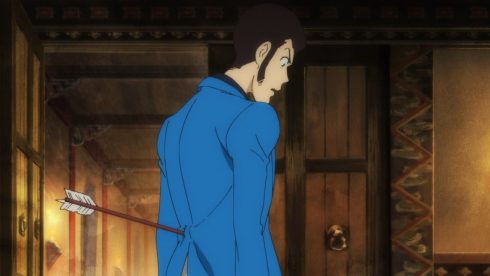 Maybe we needed more time to see the friendship between Dolna and Ami develop, perhaps then I could care more about the princess and her issues. As of right now, I’m much more interested in the sort of crush that Ami has on Lupin, not to mention the tensions between her and Fujiko. And speaking of Fujiko? It seems that this arc is going to bring the question of her and Lupin to the forefront. Which, honestly, is what I care about, and I honestly hope that the focus shifts away from Dolna and moves back to Lupin, Fujiko and Ami.

That I think, will be the saving grace of this arc. Its just unfortunate to see the show, for once, not nail every aspect of the story in a way that its done before. This might be the most uneven story arc we’ve seen from the series yet, which I guess is a bit of a disappointment for me. Here’s hoping next episode will rectify the somewhat rocky start to this arc.